A hermit crab shell upgrading exercise can be a messy affair.

I came across this bunch of Land hermit crabs (Coenobita cavipes) huddling over a newly vacated shell last week. Now I better understand what Dr Dan Rittschof meant when he said "hermit crabs with an empty shell are like women at a shoe store".

First there were just two hermits checking out the new shell. Shortly joined by two more.

Everyone has a go at testing the size and other features of the shell. Then everyone gropes everyone else.

Busy checking one another out, they form this hilarious queue. Why? Because when one of them chooses to take the new shell, its old shell becomes available to the rest. And when this discarded shell is taken by another hermit, another old shell is empty and available for exchange. And so on in a musical shell manner.

Generally though, it's a messy huddle. Dr Dan says even after the shell exchange happens, the hermits may be dissatisfied. The hermit crabs may exchange shells many times among themselves. I waited quite a while as this went on and no shell exchanged happened. I guess these crabs were quite 'kiasu'* and want to be sure before letting go of the old shell.

Hermit crabs are a combi shrimp and crab. The front part of the hermit is covered with hard shell like the crabs we eat. The hermit's back end is long like a shrimp's, and not covered with a hard shell. The hermit crab has to stick its back end into an empty shell to protect itself. As you can see from the photo below, an empty shell of any kind will be a potential hermit crab home. 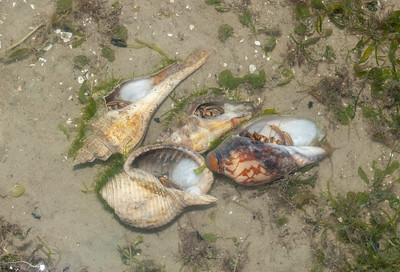 Like many Singaporeans, hermit crabs yearn constantly for a home upgrade. For hermit crabs, it's a little more critical as they need a shell that is big enough for them to retract into in order to be safe from nasty predators. But not too big to carry around. In this sense hermit are quite sensible and won't get a home beyond their means. Also, shells weaken with time and eventually fall apart. (When the living snail is inside a shell, it constantly repairs and adds to its shell.) In fact, the lack of suitable shells can be a limit to hermit crabs populations. This is why we should not take any shells from our shores. Even ugly or broken ones. Here's another shell exchange that I encountered last year. In this one, the 'new' shell has just been 'recently vacated' (Hermits don't kill the original snail owner for its shell). 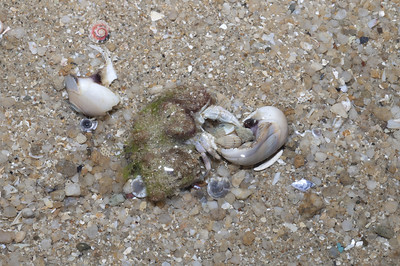 One hermit crab, in a very overgrown and 'mouldy' shell, is patiently hanging on to the shell while tiny little scavenging whelks are cleaning it out. Behind this hermit crab, is another small hermit crab in a broken shell, also waiting patiently.

How do hermit crabs find a newly empty shell?

There's lots of fascinating behaviour on our shores to observe, even among common animals such as our hermit crabs. Hermit crabs are homes to many other kinds of animals. Tiny sea anemones may settle on their shells. Little porcelain crabs may hide inside the shell with the hermit crab.

Hermit crabs belong on the seashore!

Please don't take hermit crabs home. And please don't buy one from a pet store. Hermit crabs sold in a pet store are collected from the wild. Many have died during the collection process, before they are even sold. And many of those sold also eventually die from neglect or ignorance of proper care.

For example, within the confinement of a small tank, most die during a moult. In the wild, they are able to find the correct place to moult, with the proper high humidity. More about moulting.

Even if they are kept alive for a long time, hermit crabs removed from the habitat generally do not reproduce successfully. Thus, they do not contribute to the wild population. Other animals rely on hermit crabs as homes and as food. Removing wild hermit crabs hurts the ecosystem.

If you have bought a pet hermit crab and now feel bad about keeping it, do NOT release it on our shores. It may not be the same species as those naturally found on our shores. It may have diseases that may be passed on to our marine life. The least worst option would be to return it to the pet shop where you bought it from.

If you enjoy looking at hermit crabs, why not visit them on the shores? Almost every shore will have some sort of hermit crab. You can observe them in their natural surroundings doing what hermit crabs do. And after your visit, you don't have to look after them.

Let's care for our shores, hermit crabs will always be there.

More about hermit crabs on wildfacts on the wildsingapore website.

*KIASU (kee-ah-soo): Hokkien adjective literally meaning, "afraid of losing". A highly pejorative description beloved of Singaporeans. Possibly our defining national characteristic. The nearest English equivalent is "dog in a manger", though even that is pretty mild. From The Coxford Singlish Dictionary on TalkingCock.com
Posted by Ria Tan at 8:24 AM