Jellyfish and the Nobel Prize

Green glow-in-the-dark jellyfish protein "revolutionised research in medicine and biology". It enables a visual fix on how organs function, disease spread and infected cells respond to treatment. And resulted in the Nobel Prize for Chemistry for the three scientists who played a part in discovering and developing this protein. 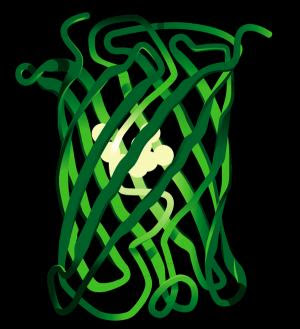 The green fluorescent protein GFP consists of 238 amino acids, linked together in a long chain. This chain folds up into the shape of a beer can. Inside the beer can structure amino acids glows green when exposed to ultraviolet light. It is used as a marker on otherwise invisible proteins within cells to trace them as they go about their business. It can tag individual cells in tissue. And it can show when and where particular genes turn on and off.

"What's so special about GFP that makes it different from other fluorescent compounds?"

Eric Heupel explains in his The Other 95% blog and also shares what other animals have this glowing quality.

The Royal Swedish Academy of Sciences has awarded the Nobel Prize in Chemistry for 2008 jointly to Osamu Shimomura, of the Marine Biological Laboratory and Boston University Medical School, Martin Chalfie of Columbia University, and Roger Y. Tsien of the University of California, San Diego "for the discovery and development of the green fluorescent protein, GFP."

The remarkable brightly glowing green fluorescent protein, GFP, was first observed in the beautiful jellyfish, Aequorea victoria in 1962. Since then, this protein has become one of the most important tools used in contemporary bioscience. With the aid of GFP, researchers have developed ways to watch processes that were previously invisible, such as the development of nerve cells in the brain or how cancer cells spread.

Tens of thousands of different proteins reside in a living organism, controlling important chemical processes in minute detail. If this protein machinery malfunctions, illness and disease often follow. That is why it has been imperative for bioscience to map the role of different proteins in the body.

This year's Nobel Prize in Chemistry rewards the initial discovery of GFP and a series of important developments which have led to its use as a tagging tool in bioscience. By using DNA technology, researchers can now connect GFP to other interesting, but otherwise invisible, proteins. This glowing marker allows them to watch the movements, positions and interactions of the tagged proteins.

Researchers can also follow the fate of various cells with the help of GFP: nerve cell damage during Alzheimer's disease or how insulin-producing beta cells are created in the pancreas of a growing embryo. In one spectacular experiment, researchers succeeded in tagging different nerve cells in the brain of a mouse with a kaleidoscope of colours.

The story behind the discovery of GFP is one with the three Nobel Prize Laureates in the leading roles:

Osamu Shimomura first isolated GFP from the jellyfish Aequorea victoria, which drifts with the currents off the west coast of North America. He discovered that this protein glowed bright green under ultraviolet light.

Martin Chalfie demonstrated the value of GFP as a luminous genetic tag for various biological phenomena. In one of his first experiments, he coloured six individual cells in the transparent roundworm Caenorhabditis elegans with the aid of GFP.

Roger Y. Tsien contributed to our general understanding of how GFP fluoresces. He also extended the colour palette beyond green allowing researchers to give various proteins and cells different colours. This enables scientists to follow several different biological processes at the same time.

Osamu Shimomura, a Japanese citizen, was born in 1928 in Kyoto, Japan. He obtained his Ph.D. in organic chemistry in 1960 from Nagoya University, Japan. He is now professor emeritus at the Marine Biological Laboratory in Woods Hole, MA, and at Boston University Medical School.

Martin Chalfie, a US citizen, was born in 1947 and grew up in Chicago. He obtained his Ph.D. in neurobiology in 1977 from Harvard University. He has been the William R. Kenan, Jr. Professor of Biological Sciences at Columbia University in New York since 1982.

Roger Y. Tsien, another US citizen, was born in 1952 in New York. He obtained his Ph.D. in physiology in 1977 from Cambridge University. He has been Professor at University of California, San Diego since 1989.

The prize amount, SEK 10 million, will be shared equally between the laureates.