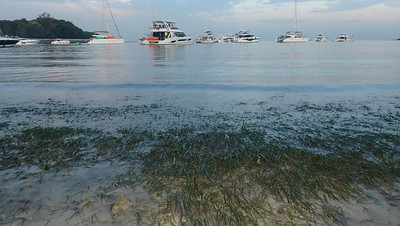 I arrived at Eagle Bay as the sun was setting. Seagrasses are still growing lushly here! 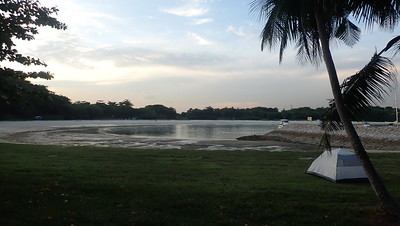 Among the seagrasses in the big lagoon, we saw a lot a lot of Blue dragon nudibranchs. They were mating, laying eggs, being eaten by nudibranchs that eat nudibranchs. Jonathan shared these fascinating photos.
We also saw many flatworms of all kinds. Here's what I saw. 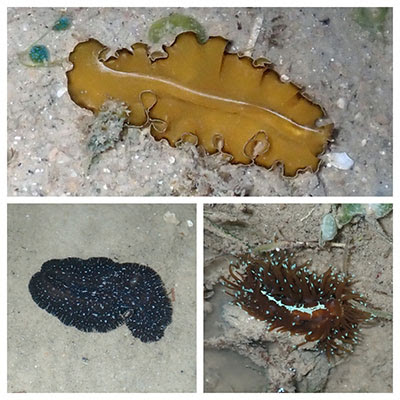 Other larger animals I saw among the seagrasses were a large Knobbly sea star, an Orange sand star (rarely encountered), and several Common sea stars. I also saw a buried Remarkable sea cucumber. 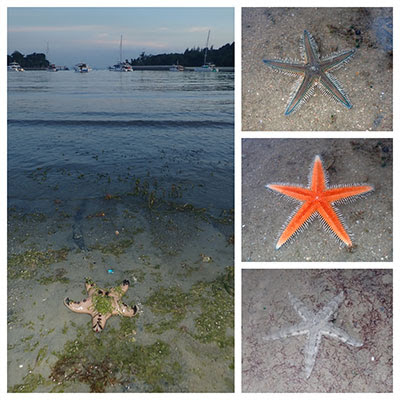 It was nice to see the Snaky anemone again. And for the first time on this shore, we saw a small Haeckel's anemone - its tentacles curled around a small fish that blundered into it. In the rocky area, Russel saw a small Giant carpet anemone with two Peacock anemone shrimps! All around Eagle Bay, I continue to see large patches of lush Noodle seagrass with fresh and often long (30cm and longer) leaves growing all around the lagoon from the south to the north and all along the central part. These are probably only exposed at a good low spring tide like today. Noodle seagrass is not often encountered on our shores. 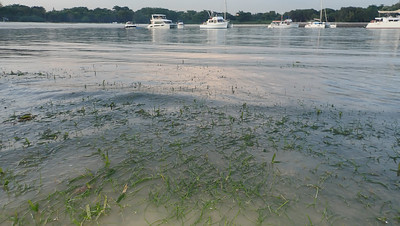 As on our last survey in Jan 2022, I saw about 20 clumps of Tape seagrass growing all around the lagoon. The Tape seagrasses at Seringat-Kias are probably the healthiest that I've recently seen from all our other shores. They had nice healthy long leaves, I didn't see any that were cropped. Although I didn't see fresh blooms, I did see male and female flowers. 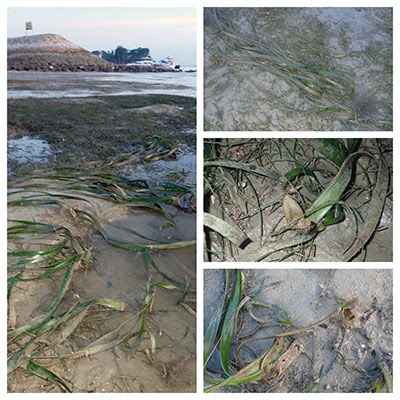 There were also lush patches of other kinds of seagrass: Spoon seagrass (small leaves) and Needle seagrass (narrow leaves), Sickle seagrass, Smooth ribbon seagrass. There was a small patch of seagrasses rhizomes being exposed. 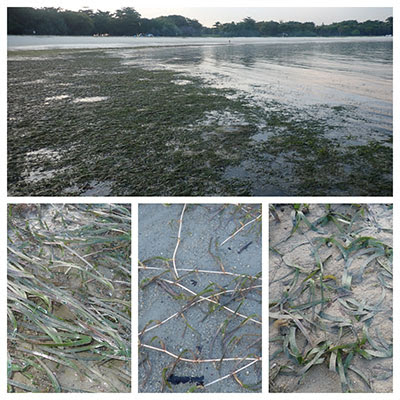 Russel also shared photos of many healthy colonies of hard corals growing on the seawall around Eagle Bay.
We started at the rocky shores of natural Lazarus Island, which lies opposite Kusu Island. 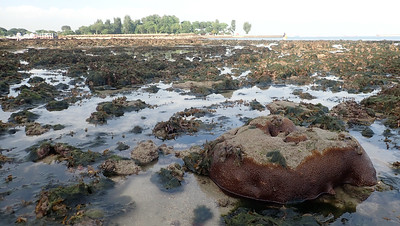 As usual, there aren't many hard corals here. Most were boulder shaped and had dead portions on the top (which is exposed at low tide) but I didn't see any that were bleaching. Jonathan pointed out a Cabbage coral (rarely encountered). I also saw a Carnation coral, Cauliflower coral and there some Branching montipora corals - hopefully starting to form a field here. There were also lots of Asparagus flowery soft corals, as well as small colonies of Leathery soft corals. 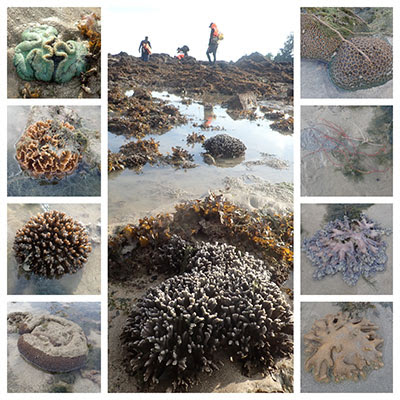 My first stop was to check on the Critically Endangered Bonduc (Caesalpinia bonduc) was fierce and healthy. It was badly chewed up with hardly any leaves on it when I saw it in Mar 2021. Toady, it was lush and healthy today and flowering, similar to what I saw last in  Jan 2022. This is a very prickly bad-tempered plant! Its fierce hooks will catch onto clothing (or bare skin!) and are hard to dislodge. There are only a few plants known in the wild in Singapore. The one on Lazarus is a male plant, I have seen the female plant on Pulau Semakau. 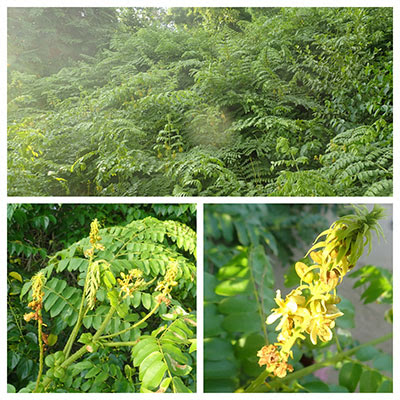 In the sandy areas here, there were Cake sand dollars, Oval moon snails and signs of Acorn worms and sand bubbler crabs. As I walked to the big lagoon, on the sand bar facing Kusu Island I saw an Orange-mouth olive snail and a Red feather star. 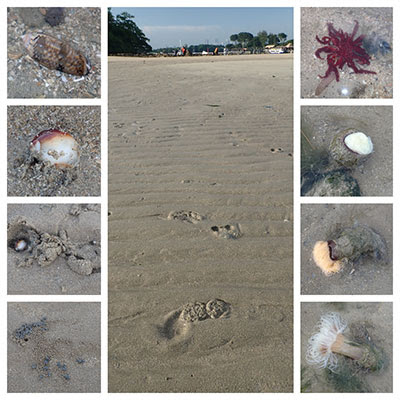 The southern shore of Lazarus that we surveyed today has seawalls. But this is minor compared to the massive reclamation that created Seringat-Kias, which buried the submerged reefs of Seringat and Kias and connected it to the natural Lazarus Island. A causeway bridge joins these with St. John's Island. Here's more about what was done to create Seringat-Kias. Besides the lush seagrasses in the large artificial lagoon, mangroves and seagrasses have also settled in a smaller Mangrove Lagoon - I last surveyed this in Nov 2020. 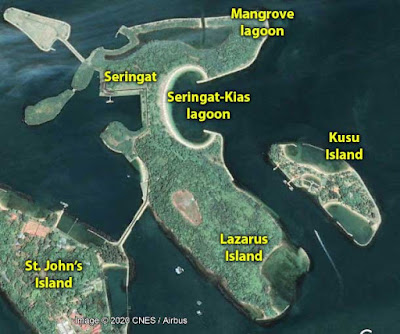