Corals, seagrasses and other marine life have settled on artificial shores at East Coast Park! 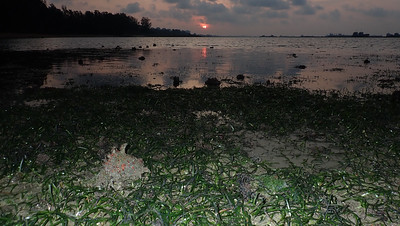 The younger and more agile team members explored the 2.5km of seawalls covered in corals. I checked out the lush seagrasses that settled in the lagoon behind the seawall. Where I saw Giant snails and other amazing marine life!  Thanks to NParks for obtaining permission for us to do this annual survey.


In the western most area, there are many dead Fan shell clams which I noticed in Jun 2021. 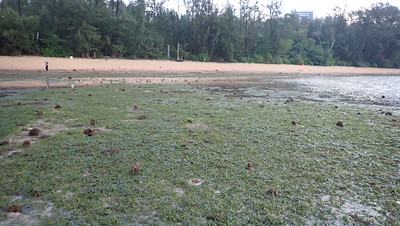 Today, I saw more than 20 Ramose murex snails in the area Listed as 'Endangered', these huge snails feeds on clams and other snails. Some of the old huge snails with weathered shells were covered in egg capsules, probably of their own species. There were also many smaller murex snails - with shells that were still shiny white. Many of them were attached to Fan shell clams...hmmm...eating them? 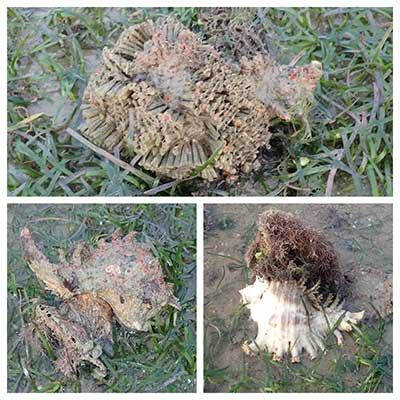 Although the seagrass meadows were not as densely populated by animals like those at Changi, I did come across some special animal. Like the Cow nudibranch, Glass anemone, a small Knobbly sea star, one live Thick-edged sand dollar (lots of dead skeletons though), one Fig snail (spotted by Kelvin). The most abundant large animal in the seagrass areas were Haddon's carpet anemones. Today, I saw some with Tiny carpet anemone shrimps, another with larger Peacock anemone shrimps. There were also many Black sea urchins and White sea urchins. I only saw one Warty pink sea cucumber. 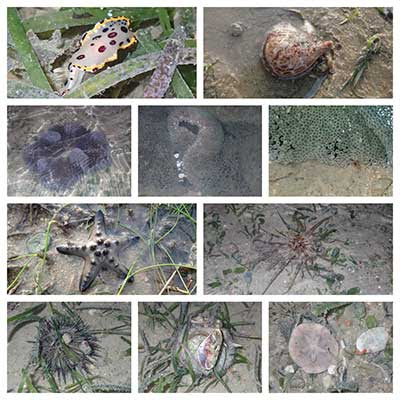 While I didn't check out the long seawall, even on the higher shore, there were signs of corals growing on the artificial seawall. Many plate-form Disk corals from tiny to small, patches of encrusting corals. Also many Button zoanthids with Tiny red sea cucumbers. Also an Arabian cowrie (apparently these were abundant on the long seawall). I also saw a Maroon stone crab and a Rafting crab. 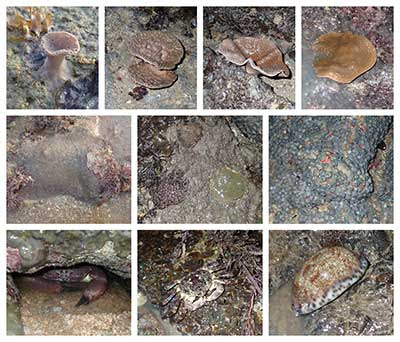 The seagrass situation seems similar to our last survey in Jun 2021. There are lush dense growths on large parts of the lagoon created between the long seawall and the reclaimed sandy shore. The most common seagrasses remains Spoon seagrasses (both small and large leaf blades) and Needle seagrass (both skinny and broad leaf blades). There were also large patches of Noodle seagrass with long leaves. I also saw many clumps of Tape seagrass, both on the low water mark and in deeper water in the middle of the lagoon. All the clumps had nice long leaves, I didn't see any with cropped leaves. None were flowering though. I was too exhausted today to check up on mangroves and coastal shore. The intertidal surveys are getting more and more difficult for me to do. 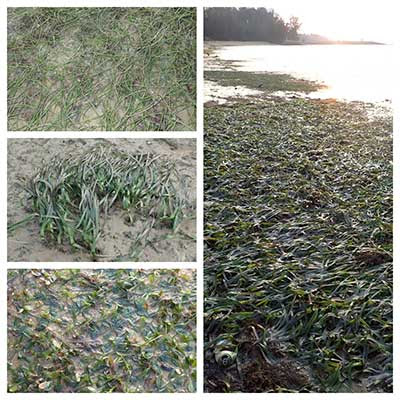 This shore is one of the most recent that our team 'discovered'. Thanks to Arjun Sai Krishnan who shared with me some intriguing photos of corals at East Coast Park. As a result, Kok Sheng recced the area before a small team visited it for the first time in May 2015. We returned again in May 2016. But shortly after, the area became off limits and cameras installed to deter unauthorised entry. Today's survey is made possible by kind support of NParks who obtained permission from the relevant authorities. We are grateful. 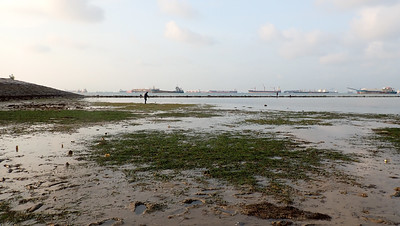 Here's a glimpse of the seawall covered in corals, shared by Richard Kuah
Another view of the corals growing there thanks to Kelvin Yong 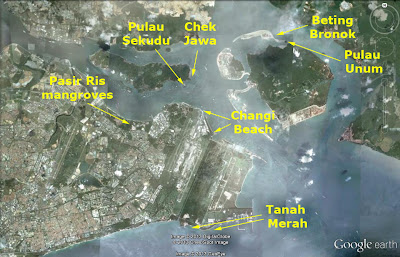 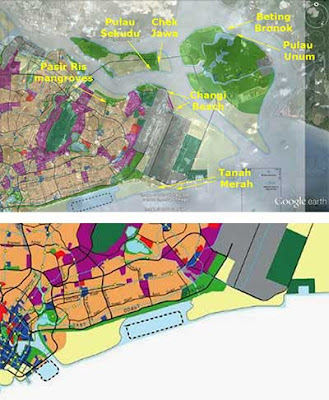 Check out the awesome videos highlighting these themes in Oceans Reimagined created by Nathaniel Soon of Our Seas Our Legacy.
Photos by others on this survey