Changi is echinoderm heaven! It was great to see lots of sea stars, sea cucumbers and other favourites today. 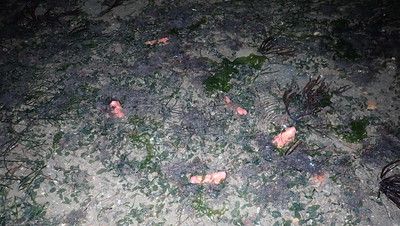 The seagrasses are also doing well and Chay Hoon spotted lots of nudibranchs, flatworms and other critters. Unfortunately, I didn't see any dugong feeding trails nor many sea fans.

I was so relieved to see plenty of Biscuit sea stars - from tiny ones to large ones. For a few years, we stopped seeing them here. We also saw several Knobbly sea stars - quite large ones! I also saw one small orange Cake sea star, a Sand star, a Spiny sea star. Chay Hoon saw an Eight-armed sand star. 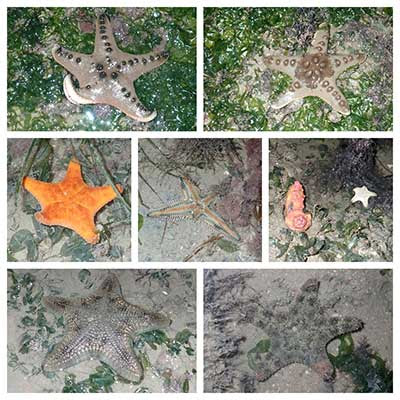 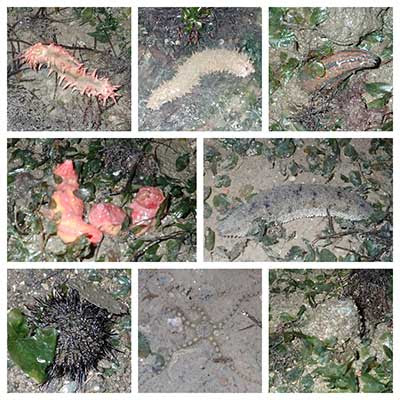 I started at the western end of the shore while Chay Hoon started from the east. There is a small stretch of rocky shores here. As on my survey here in Jun 2020, most of the rocky shore was covered in with Melted chocolate sponge, with very few sponges of other kinds. I didn't come across any nudibranchs, although (of course) Chay Hoon saw lots. There were only a few sea fans but still many patches of zoanthids. I only saw tiny patches of Zebra corals. But I did see a very large colony of Stinging hydroids. 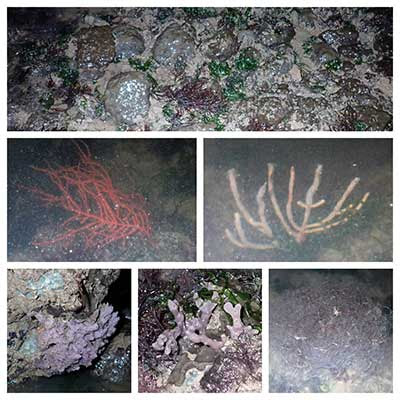 Clinging to the rocks in deeper water were many Blue feather stars. I saw about 6, but most were hard to photograph in the murky water. These animals are echinoderms and can move their arms quite vigorously. 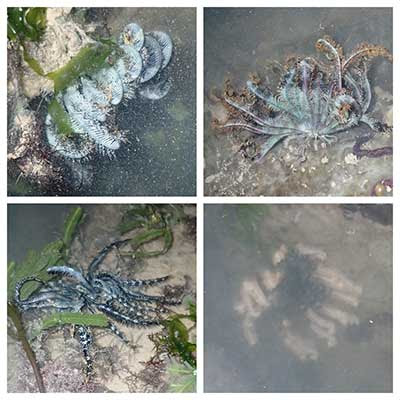 Animals live on other animals on our shores! The Ball flowery soft coral often has a large Ghost brittle star nestled within its branches - often all you see is the banded arms of the brittle star. Ceriathids often have black Phoronid worms living in their tubes! 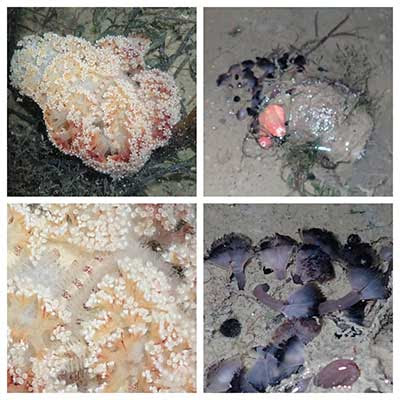 Most of the shore at the low water mark was soft and silty. Perfect for burrowing anemones and cnidarians. It was nice to see a Glassy sea anemone - I have seen one for a while. There were also Haddon's carpet anemones, one Tiger anemone and one Swimming anemone and one Common peachia anemone. I only saw one Sea pencil, no other sea pens. Washed up on the high shore, remains of a Huge jellyfish. 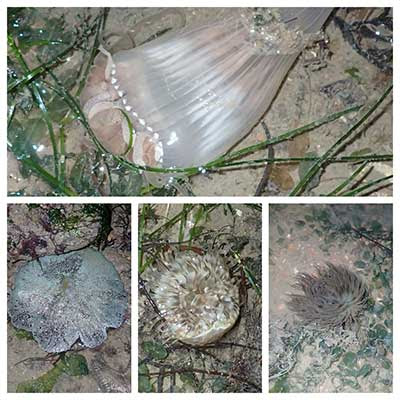 It was great to see a large Noble volute. According to the Singapore Red Data Book, this beautiful snail is restricted to our part of the world, in particular, Singapore and Peninsular Malaysia. There were also many of the molluscs commonly seen in our seagrass meadows: Window pane clams and Fan shell clams. And these were not over abundant either -  I didn't see any clam invasion on this shore. There were also many hermit crabs and crabs of all kinds. 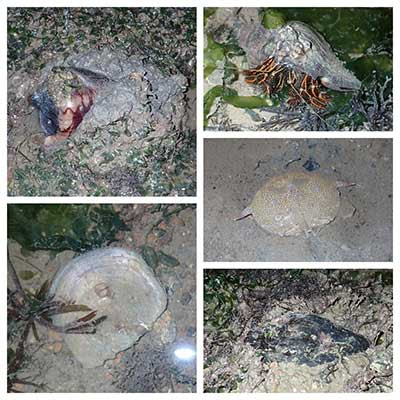 As on our last survey in Jun 2020, the seagrasses were doing well. Spoon seagrass (with large leaf blades) is the most common. There was a small patch of Needle seagrass (with narrow leaf blades) in the middle of the lagoon. The seagrasses are dotted with a variety of colourful animals. But we didn't come across dugong feeding trails today. There was also a bloom of Cotton candy red seaweed in the centre of the lagoon. This seaweed seems to bloom frequently on this shore. While a wide variety of seaweeds were growing on the rocky areas. 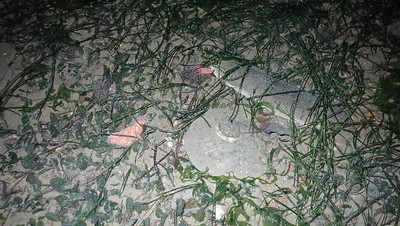 A man with a cast net walked past me, but didn't cast the net nearby. There was one fishing line laid into the water. I didn't come across any fishing nets or traps. The tide turned well before sunrise.

Others on this survey