Just before the 'Circuit Breaker', these amazing sightings were shared. Dolphins while kayaking our Southern Islands, and a sea turtle that came out to lay eggs on our shores. 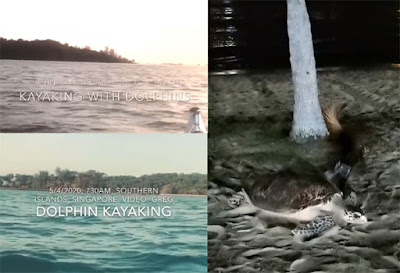 April is also the season for mass coral spawning of our reefs. But just because we were not out there to see, doesn't mean life doesn't go on in our waters!

Dolphins encountered by kayakers out at the southern islands on 7 Mar 2020, shared by Kayakasia who added that the video was by Greg (7 March 2020. ard 8.30am).

On 20 Mar, Suzairhe Sumari shared: Welcome To Singapore My Friend. Wow, I'm Flabbergasted. She's Been Searching For a Spot To Lay Eggs For About An Hour. Unfortunately Not A Right Country To Leave Behind Her 'Gems'. Maybe. Btw, I Did Informed Acres Wildlife Rescue Centre.

On 5 Apr, kayakers once again encountered dolphins. At 7.30am at the Southern Islands, shared by Greg.

We look forward to more sightings of amazing marine life on our shores after the COVID-19 crisis eases up!

More about our dolphins and sea turtles.

During the Circuit Breaker 7 Apr-4 May 2020, the shores have been off-limits. Beaches are cordoned off, leisure craft not permitted to host trips and all of us should not leave the house except for essential activities.

Coral mass spawning in Singapore was first recorded by Dr James Guest in 2002. It was the first record of coral spawning in the tropics. At least 18 different coral species from ten genera and five families (Acroporidae, Faviidae, Merulinidae, Oculinidae and Pectiniidae) have been observed to spawn in our waters! Mass spawning occurs on the third to fifth nights after the full moon between 8 and 10 p.m.

In interviews with the media, Dr James Guest emphasised that corals are part of Singapore's biodiversity and natural heritage. "There are 255 species of corals recorded here, and there may be some corals here that were around before Stamford Raffles arrived."

The fact that our corals mass spawn shows that our reefs are functioning well! According to Dr James, the number of coral species in Singapore that mass spawn is "as high as on other Indo-Pacific reefs, like the Great Barrier Reef... " This shows how rich Singapore's natural heritage is. We can find right at our doorstep: "diverse, functional and fascinating coral reefs, that people would normally associate only with countries like Australia."

Posts about previous annual mass coral spawning in Singapore.
Posted by Ria Tan at 9:54 AM