With kind permission and company of NParks friends, we surveyed this interesting shore next to Labrador MRT station with mangroves, rocky shore, seagrass meadows and sandy shores! 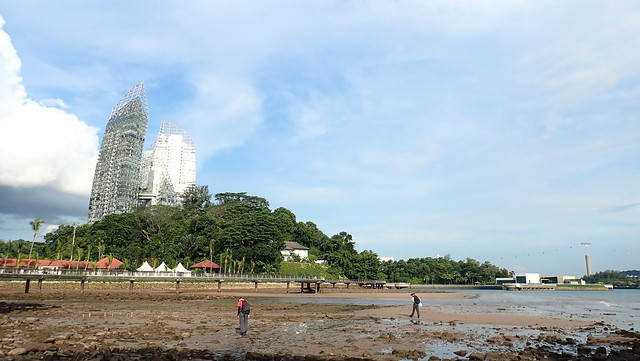 The sandy area at the mouth of the Creek is alive and well, and healthy seagrasses have spread out in the area. The team find a small Knobbly sea star, the rare Cryptic sea star, as well as other interesting marine life such as octopus, nudibranchs, flatworms and more.


For the first time, I saw large dense patches of healthy Spoon seagrass in the area nearer the seawall of the Park. 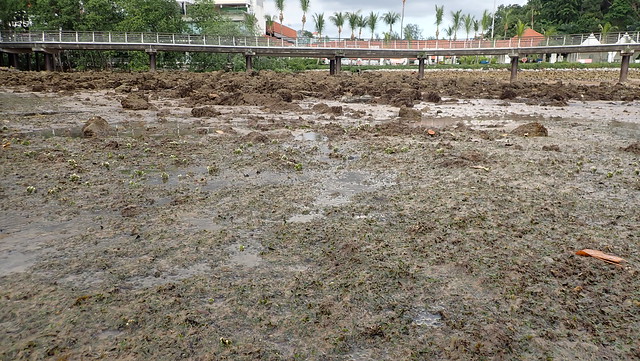 Spoon seagrasses are growing lush along the sides of the Creek at the mouth. And you can see it from the boardwalk! 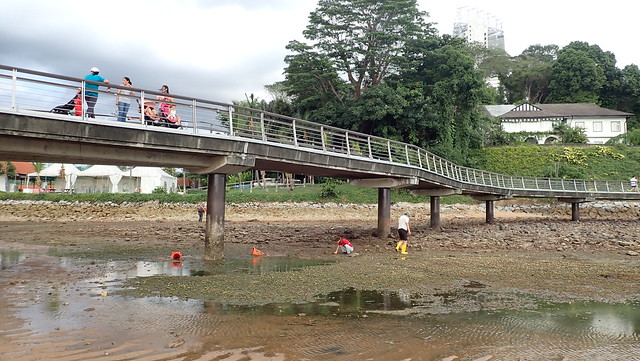 The seagrasses are still lush on the eastern end of Berlayar Creek boardwalk, past the growing stretch of sandy shore. All the Spoon seagrass on this shore had small to tiny leaf blades. 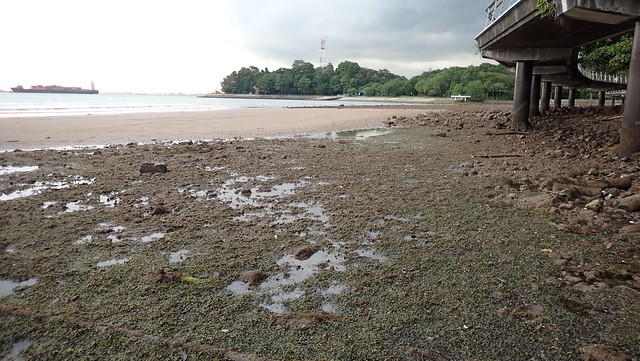 There were blooms of Small coin green seaweed at the seawall area as well as in the eastern patch of seagrass. This was also observed in Nov 2018. Spoon seagrass was growing among them. I'm not sure which came first, the seagrass or the seaweed? 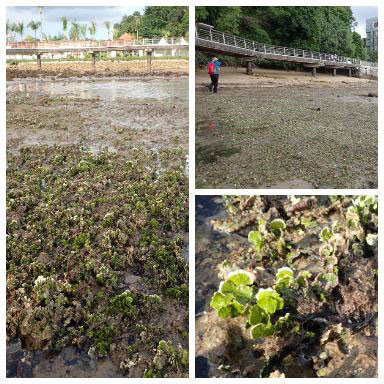 The patch of Tape seagrass is still there, now surrounded by a sandy area. Although the leaf blades are cropped short, one of the rings of seagrass  had three female flowers. I couldn't find any developing fruits or male flowers. 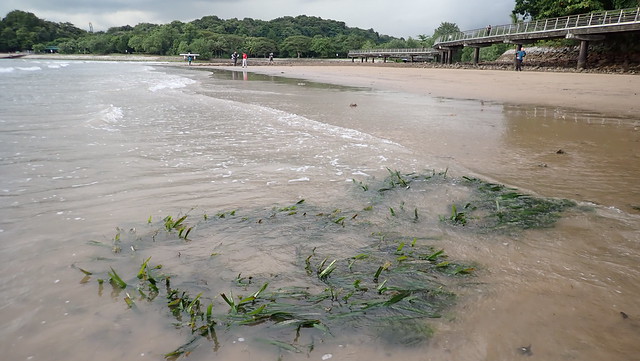 As in the photo below, this seagrass patch had long leaf blades and female flowers in Jan 2017. When it was surrounded by Spoon seagrass. 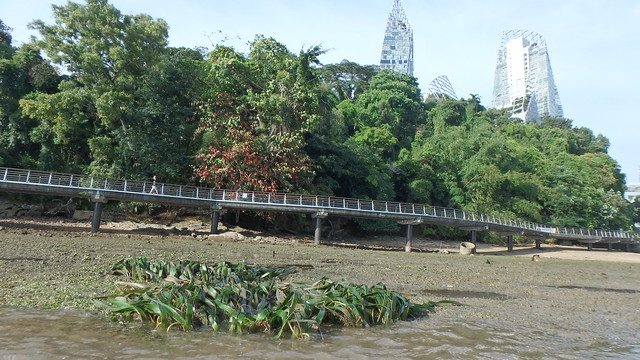 The mouth of the Creek has a growing mound of sand, as first observed in 2018. 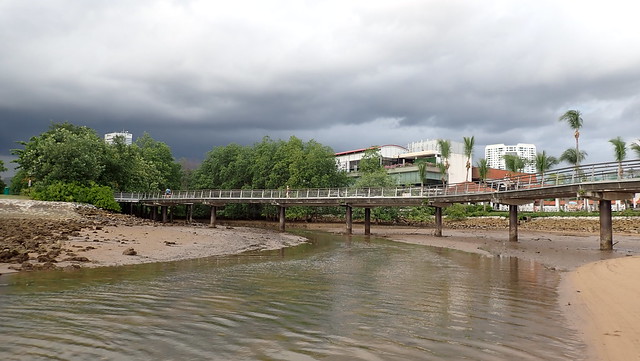 Sandy patches now form larger stretches at both sides of the mouth. 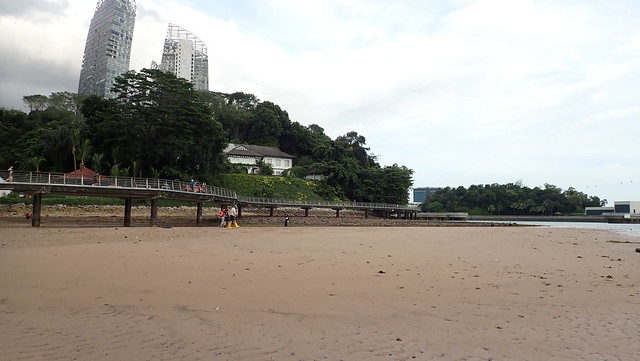 The sandy area is alive with a variety of animals. I saw several small Cake sand dollars. Kok Sheng found me a living Thick-edged sand dollar, which are not commonly seen. There were signs of sand bubbler crabs, some moon snail egg collars, and I saw one Weasel olive snail. I didn't see many tubeworms though. Kok Sheng found the Common sea star which I first saw in Nov 2018. 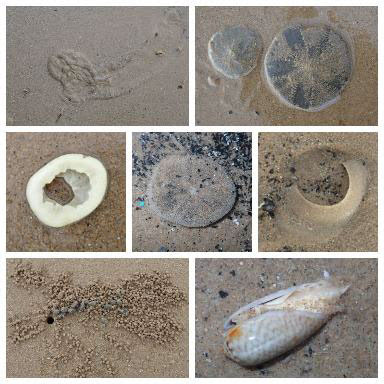 There were also still lots of Haddon's carpet anemones on the sand bar where the seagrass used to be. I also a  few Frilly sea anemones. 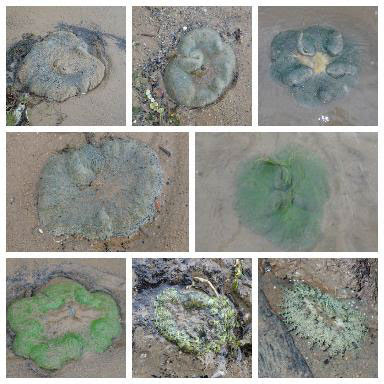 There is still an interesting rocky rubbly area near the entrance of Marina at Keppel Bay. The hard surfaces providing a place for hard and soft corals to settle. The rest of the team saw interesting examples. 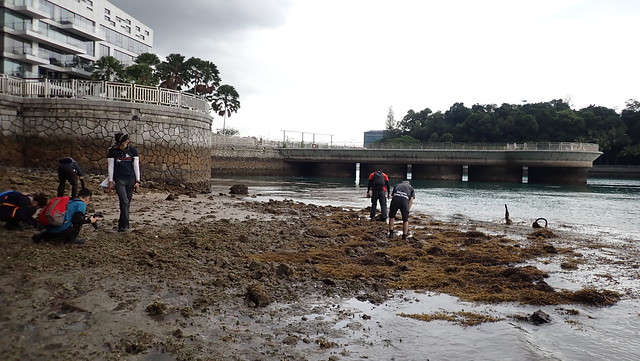 A Knobbly sea star was seen!

As well as the rare Cryptic sea star.

There are still some golf balls on the shore, but not in the huge quantities we used to see in the past. These come from the Keppel Club golf course on the northern bank of Berlayar Creek. 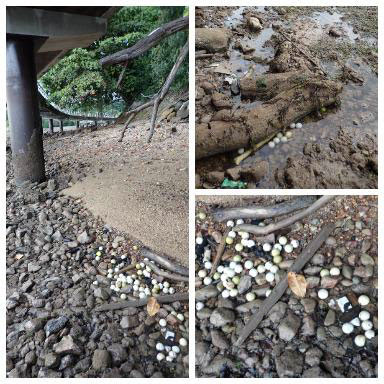 After our last survey in Oct 2017, Ronald Batchelor, Senior Horticulture Officer at Keppel Club recently shared with me that the Club had taken measures to stop the golf balls from entering into the Berlayer Creek mangroves and shores. The gratings had been already installed at a big drain outlet to prevent the golf balls from going into the mangroves from the driving range. More drain traps were placed to prevent more balls from being discharged into the Berlayer Creek. He also shared these photos Club workers have also been cleaning up golf balls from the Creek. So bravo to the Club! 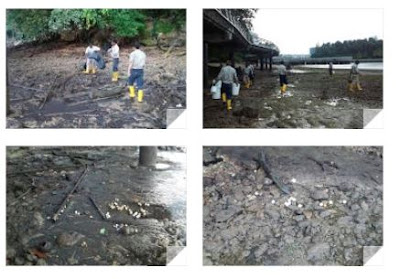 There seems to be a growing bloom of young Sea lettuce seaweed on the seawall. We've also observed this at Changi recently. I seems rather unusual to me. 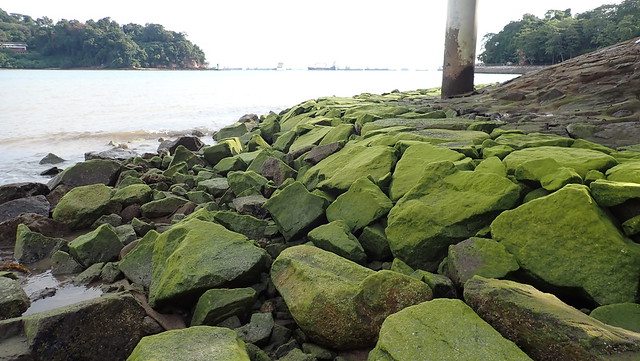 I noticed a thin line of flotsam on the land grass, suggesting that the high spring tide now already breaches the seawall. An early sign of rising seas? And a cause for worries about erosion? 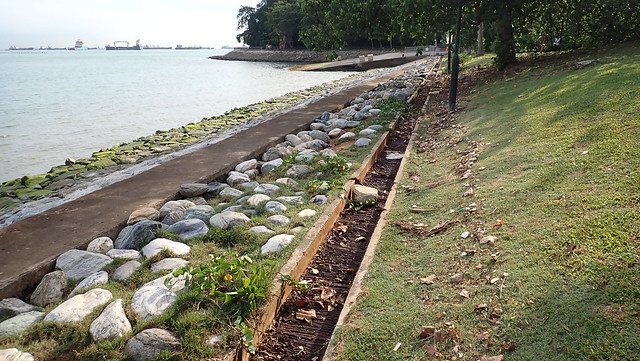 As the sun set and ominous weather developed, the emissions from the petrochemical plants on Pulau Bukom becomes more obvious. 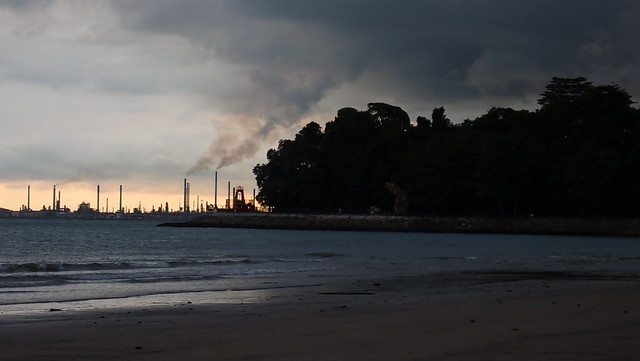 Thanks to NParks for permission to survey the shore. Special thanks to Darren and Pin Chong for looking after us and for taking care of these precious shores.


Others on this trip: Jonathan
Posted by Ria Tan at 11:16 AM