Codefish-SG: How to build a Singapore fish library

Today is the launch of the Singapore Marine Fishes Expedition 2019! Scientists and volunteers are coming together for 12 days to build a fish library. 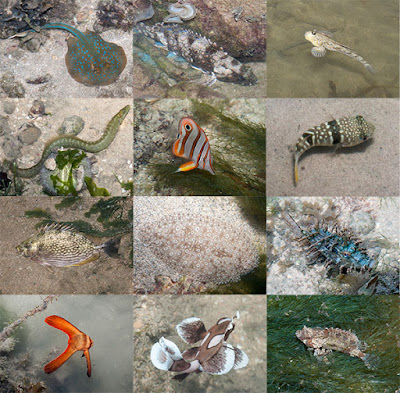 Why do we need a fish library? Why is it even important to know what fishes Singapore has?


What fishes are found in Singapore and why is it important to know our fish biodiversity?

The variety of fishes found in Singapore is a great indicator of the health of our waters. A wider variety of fishes suggests that we have the clean water and healthy ecosystems (mangroves, seagrasses, reefs, sandy shores) needed to support such biodiversity. Tiny fishes support a healthy ecosystems as part of the food chain. Larger predatory fishes can only thrive if there is enough food for them to eat.

How can we easily monitor the variety of fishes found in Singapore waters?

eDNA allows scientists to identify the fishes found in an area simply by sampling a cup of the water from the area! How is this achieved?!

Scientists must first build a library of the DNA sequences of our fishes. Mucus, scales and other traces of fishes in a water sample provide DNA sequences that can be compared to the sequences in the library. In this way, scientists can identify the fishes found in the sampled area. This method is known as ‘environmental sampling (eDNA)’. It is an efficient way to biomonitor the fishes living our marine areas.

How are we building the library of Singapore fish DNA?

More than 800 fish species are known from Singapore waters, about half are associated with coral reefs. A team of researchers are hard at work to build this inventory of fish species by gathering samples for the Lee Kong Chian Natural History Museum. Here, the fishes are catalogued and referenced by scientists, just as in a library.
The team also plans to build another library: of the DNA information of these fishes. They will use ‘DNA Barcoding’. In this method, specific genes (e.g. cytochrome oxidase I or cytochrome b) are systematically sequenced and compared for all species. The DNA sample and barcodes are kept in the library for future reference.

DNA Barcoding is a reliable method to detect fishes that look very different but are actually the same species. Or a fish species that changes drastically as individuals grow older. For example, many species of parrotfishes can change their sex as they mature. These changes, from juvenile to adult, and from one sex to the other, include drastic changes in patterns and colours at different stages. But their DNA will remain the same!

Another application of DNA Barcoding is to differentiate between two species that appear very similar, but are actually different species, these are known as ‘cryptic species’. Applying DNA barcoding can thus help identify unknown species among fishes that look very similar.

Although it is a difficult and tedious task to build this inventory, after the library is created, it will allow easy cross-referencing of the species, their traits, associated environmental data, and DNA sequences. 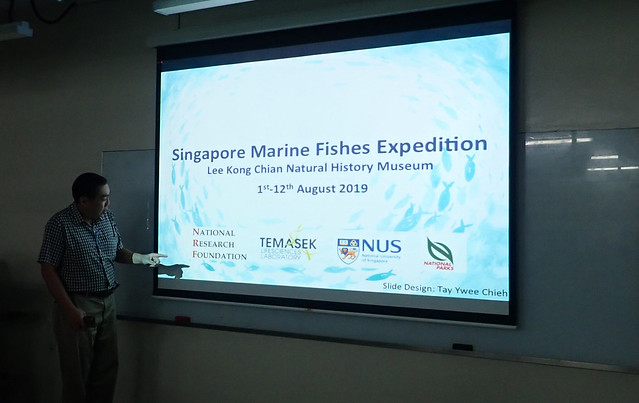 The Singapore Marine Fishes Expedition 2019 is part of the larger study CODEFISH-SG funded by Marine Science R&D Programme, National Research Foundation, Singapore. The expedition runs for 12 days (1-12 August 2019) with involvement from 7 international and 6 local scientists, as well as help from over 30 staff and volunteers in Singapore. All specimens obtained will be deposited at LKCNHM. In addition to taking the DNA, the fishes will also be closely studied, including x-rays and photographs. All sampling sites and methods are approved by National Parks Board and other relevant agencies and meets IACUC international ethical standards in scientific research.

Why do we need to kill the fishes?

This question is often asked. Here’s the reasons why a proper fish library requires specimens of entire fishes.

Photos are usually not sufficient to identify species with certainty. Often small or internal features must be closely studied and compared, sometimes after dissection and looking at tiny features with powerful microscopes.

All specimens collected during the Expedition will be kept at the Lee Kong Chian Natural History Museum. A well preserved specimen can last for decades and contributes to a vital archive of biodiversity in Singapore. These specimens are also invaluable for scientific study here and around the world.

Some specimens are particularly precious because they are the animals used to descibe a new species. Called a Type Specimen, this particular specimen will be vital as scientists all around the world will study it to compare with known species as well as newly discovered animals.

A specimen of a well known species is also important, to vouch for the existence of the animals on our shores. Also, to document the variation within the same species (slightly different shapes, colours and other features), as well as to show where they were found in Singapore.

The fishes found during this Expedition will be euthanised as painlessly as possible. The specimens will be handled with respect and care. Experts will preserve, photograph, X-ray and process the fishes so that they will contribute to science in the decades ahead. These fishes will not have died in vain.

What happened at the Singapore Marine Fishes Expedition 2019?

Daily and other updates are posted here.

Email ThisBlogThis!Share to TwitterShare to FacebookShare to Pinterest
Labels: fish-expedition