Pulau Jong is among the last untouched islands in Singapore. It has not been reclaimed or directly impacted by development. Pulau Jong is what all our Southern islands looked like before they were reclaimed. 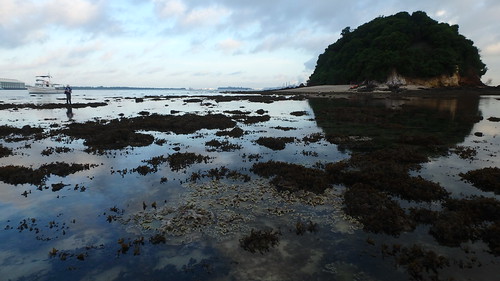 Dubbed the 'char siew pau' island because of its cute dumpling shape, Pulau Jong has a huge reef flat that is exposed at low spring tide. This reef flat together with the domed island is said to resemble the silhouette of a Chinese sailing junk, thus 'Jong'. Our last survey was in Jun 2016 at the height of mass coral bleaching. It was relief today, to see no mass bleaching. Although there appears to be fewer hard corals on the intertidal now. 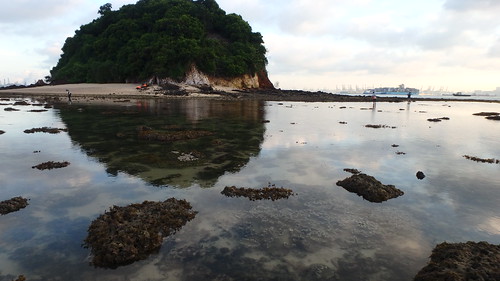 Although it lies next to major shipping lanes, petrochemical plants, tank stores and Semakau Landfill, this tiny island is very much alive! 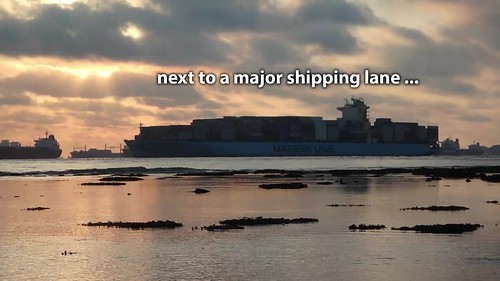 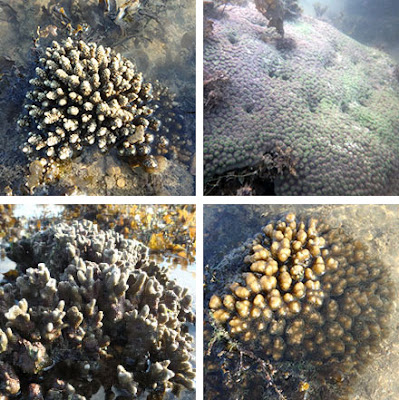 I saw some large Disk corals corals that were alright, although one was very pale green with dead portions. I only saw one small Flowery disk coral and it was bleaching. 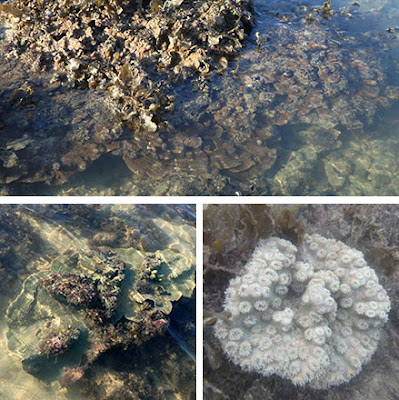 I saw a few Merulinid corals, most seemed alright but some had pale patches or dead portions. 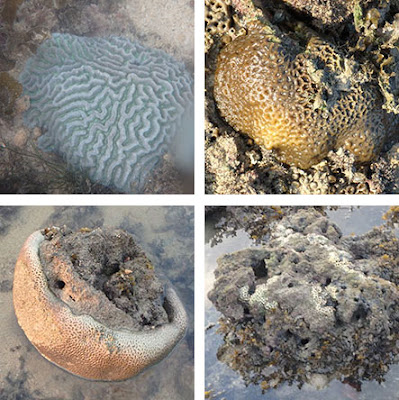 I saw a few Small goniopora coral and a few Anemone coral colonies, they were not bleaching.

Most of the large corals were Boulder pore corals, they were not bleaching, although some were pale on top or had dead portions. I'm not sure if green is a normal colour for this coral. 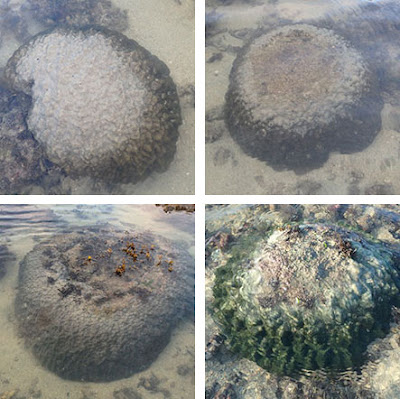 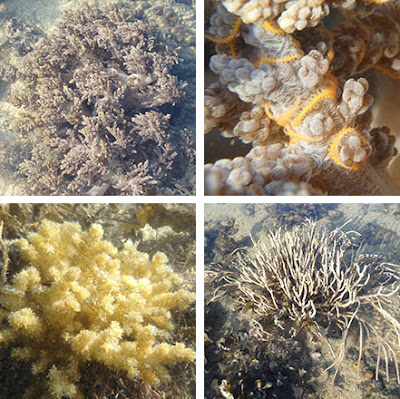 I saw many Frilly anemones, they were not bleaching. I saw one Smooth frilly sea anemone and one Magnificent anemone. Richard found the Merten's carpet anemone. 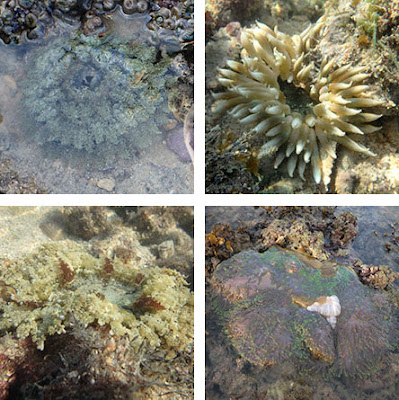 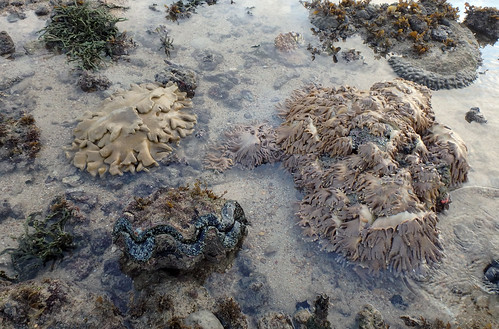 There were sprinkles of Sickle seagrass, with fresh green leaf blades, not burnt or covered in epiphytes. 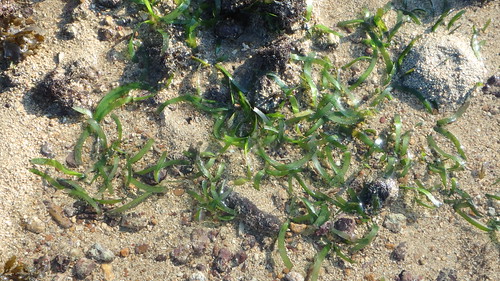 Pulau Jong has a cloak of coastal forest, with special rare plants such as Delek Air and Sea teak. 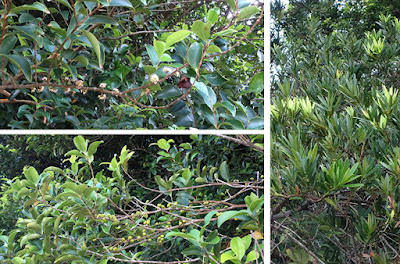 Today, I noticed a gap in the forest. 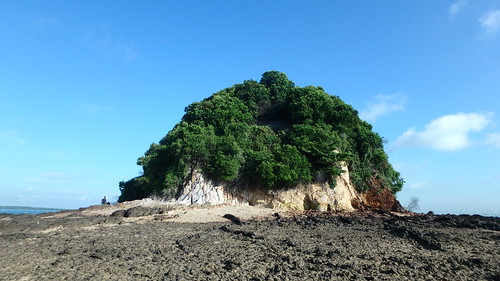 Probably caused by a landslide? 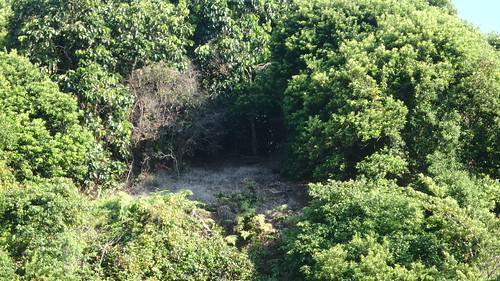 Today, I saw a large fish trap stashed on the high shore. I disabled it. On our last trip in Jun 2016, we did find a fish trap on the high shore but didn't have time to disable it as we rushed off as a thunderstorm gathered nearby. 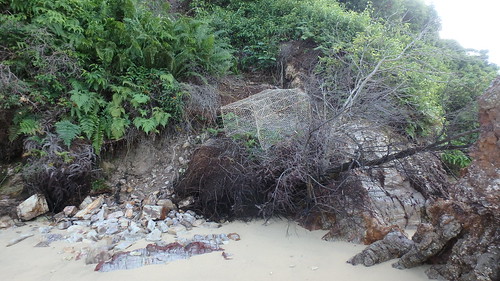 Pulau Jong lies near the petrochemical plants on Pulau Bukom, producing a plume of emissions in the clear blue sky today. 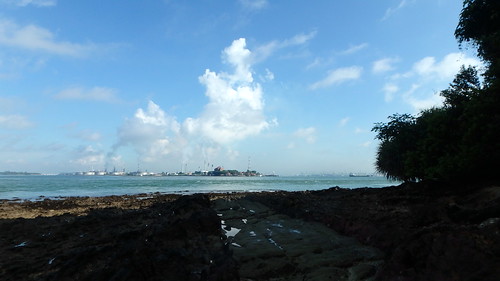 Pulau Jong is one of the existing natural shores that may be impacted by the landuse plan by the Ministry of National Development released in Jan 2013 in response to the Populations White Paper with a 6.9 million population target. The dotted margined blue areas are "Possible Future Reclamation". The other shores impacted by this plan include Pulau Hantu, Terumbu Pempang Darat, Terumbu Pempang Tengah and Terumbu Semakau.

Let's hope the last of our unspoilt islands, Pulau Jong will stay safe until we return next year.

Others on this trip: Mr Kuet, Joelle Lai
Posted by Ria Tan at 9:29 PM