We check on Big Sisters Island for the first time since mass coral bleaching affected the reefs here. 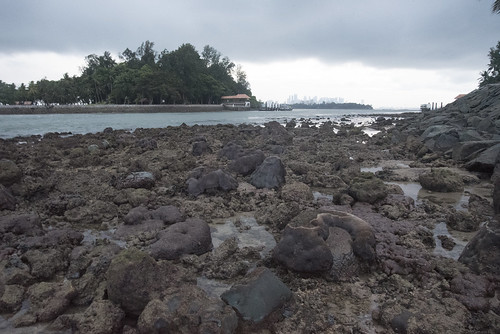 It was a relief to see that most of the corals were not bleaching. But we sense about 50% of the corals have died, and some corals had bleaching portions or were very pale. We also saw signs of some disturbing threats.


This is what I saw in Jun 2016 at the height of mass coral bleaching. At that time, the survey team asssess about 60% of the hard corals we saw were bleaching, 50% for leathery soft corals and 50% for sea anemones. Today, I didn't see any totally white coral colonies.on the shore facing Small Sisters Island.
Some of the Boulder pore corals were pale or had very pale portions. 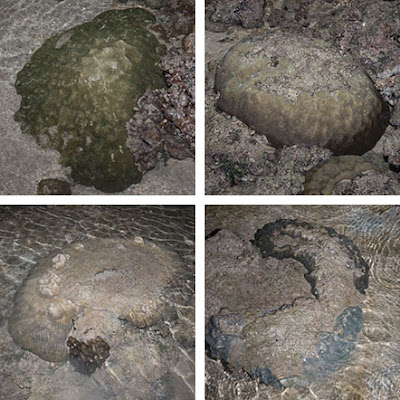 Some of the Merulinid corals (previously Family Faviidae) were alright, but many colonies were mostly dead with only small portions of living tissue. There were some small colonies starting to grow on dead corals. 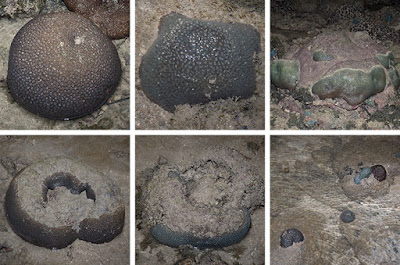 I saw a few small Flowery disk corals, all of them bleaching. I only saw one other small Disk coral.

I saw one Cauliflower coral, half of the colony was dead. I saw several Crinkled sandpaper corals that were alright. 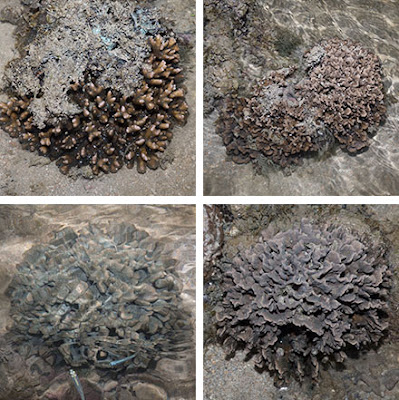 There were a few small Brain corals, most with dead portions.

I saw one small Acropora coral growing on the sea wall and a few Montipora corals. I did not see any Carnation coral or Ridged plate coral.

I saw a few Anemone corals, most with dead portions. The small Goniopora coral colonies I saw were alright although some had pale patches. And a few small Galaxy corals that were alright.

Some coral colonies  had white patches. 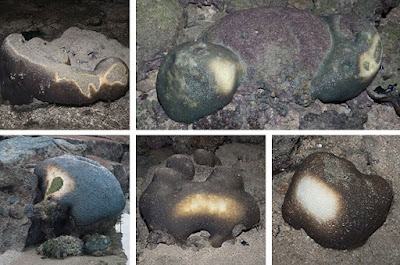 This is a short video clip of the shore facing Small Sisters Island. 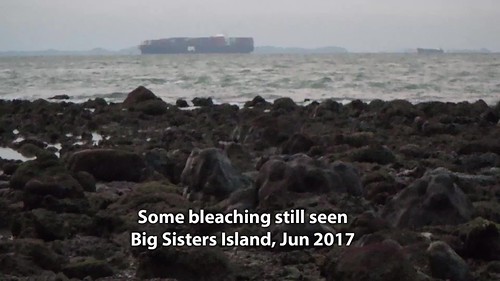 I saw one Asparagus flowery soft coral, and many small leathery soft corals of various kinds. None of them were bleaching. 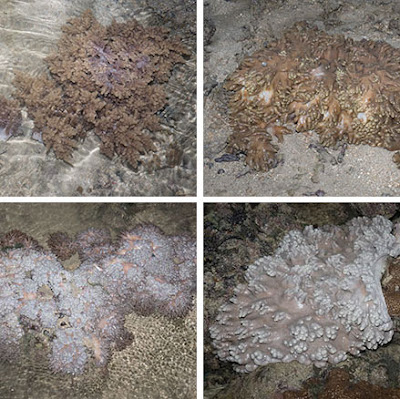 But this Omelette leathery soft coral was seriously peeling, although it was not bleaching.

There were large patches of Sea mat zonathids, and Button zoanthids. None of them were bleaching. Although the Feathery soft corals had paler patches.

There were some corallimorphs of various kinds in small clusters. None of them were bleaching. 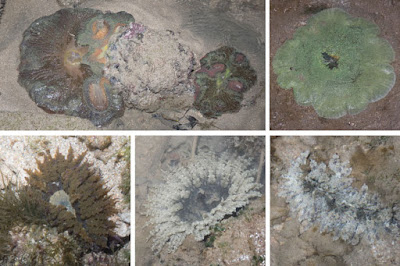 There were still lots of fishes in the big lagoon. Many Tropical silversides and some Common mojarra. I saw one Snake eel and one small Anchor tuskfish. 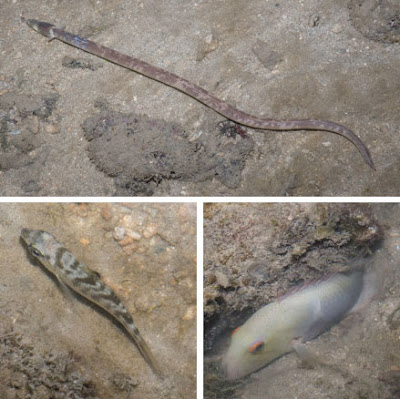 Other animals seen include many Red egg crabs. One Spangled flatworm, a few Ornate leaf slugs. There were many large Common sea stars gathered closely together in the big lagoon. 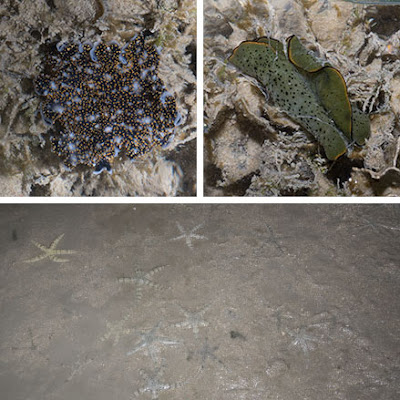 I couldn't find any Spoon seagrass in either lagoon. The small patch of Tape seagrass in the small lagoon was cropped.

Today, we didn't see any monkeys. The dustbins don't appear to be locked and they appear accessible from the underside too.

Shortly after sunrise, there was an overwhelming stench of sewerage while I was on the shore facing Small Sisters Island. The rest of the team in the big lagoon also smelled it. It was much too strong for a small pile of monkey poo. Then I remembered Alex our skipper, telling us that every morning, a huge barge full of live pigs arrives from Indonesia (1,000 pigs per day according to this Today article 14 May 2017).
Indeed, there was a barge near the Sisters Islands. It stopped there, waiting for immigration clearance. In the half an hour that I was in sight (and smell) of the barge, the immigration boat still had not arrived. Meanwhile, the barge drifted as the tugboat tried to maintain position without anchoring. Is it just the smell that hits the Marine Park? Or is pig shit actually dumped over the side and thus pollutes the Marine Park?  What happens if the tugboat loses control of the barge and the barge hits the shores of the Marine Park? Here's a video of the barge. 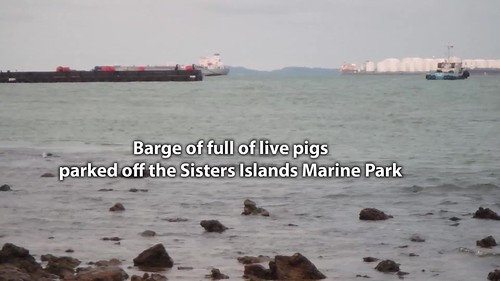 There isn't much plastic trash on the shore. 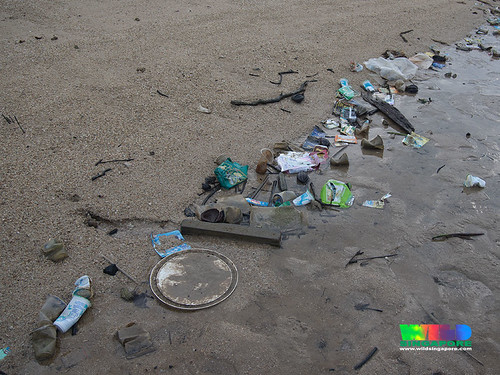 But as usual, a lot of single use water cups (the kind given out at funerals) which is not commonly used by Singapore picnickers. Where do these come from? Ferries that ply the waters nearby? 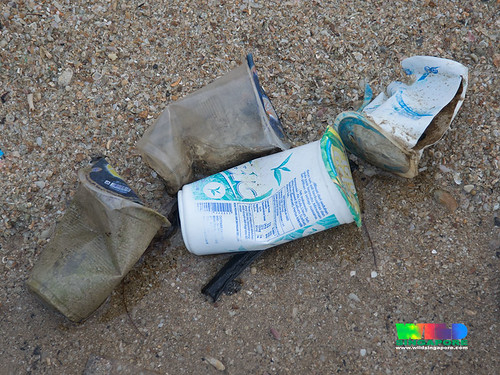 I also came across two hooks with sinkers, and a short stretch of monofilament with 6 small fish hooks. They were in the middle of the reef and I easily picked them up. They were not caught in the rocks. So why did the fishermen cut these off? 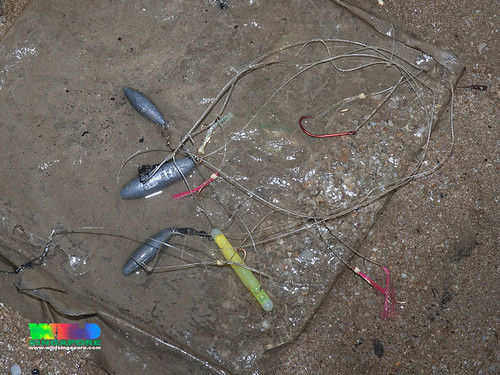 On the shore, I saw at least 6 large fishing poles and a shelter was cordoned off with music playing in the area. Later, I had a friendly chat with one of the occupant. He shared how he used to come often and was very sad that the corals were all dead now. He said he and his sons came last night and did catch and release. There aren't any good fishes here anymore. 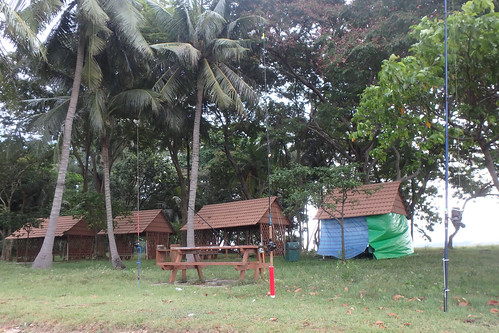 Fishing is now prohibited in the Marine Park. Near the jetty, there is a sign outlining the Do's and Don'ts in the Park. 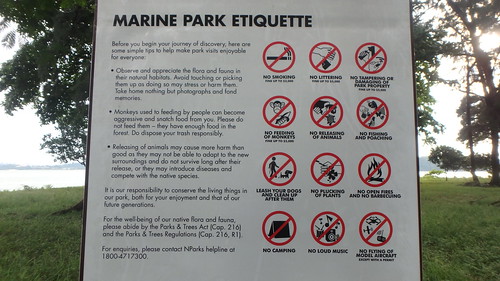 Like many parks in Singapore, you can visit Big Sisters Island any day from 7am to 7pm. You don't need a guide or a permit to visit. There is no ferry to the Sisters Islands but you can hire a water taxi to take you there from Marina South Pier. There are about 10 commercial water taxi companies located there. You can call to book a taxi or just go to the Pier and get a taxi. Most leisure visitors go with Island Cruise, which caters to tourists. More about the Sisters Islands Marine Park on the NParks website. 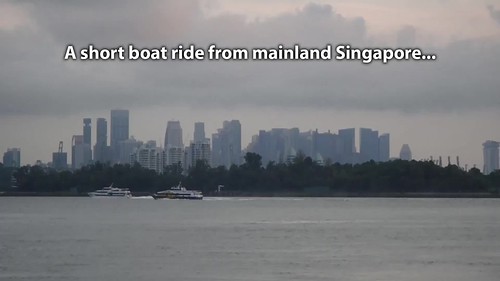 I hope Big Sisters Islands will recover by the time of our next survey!