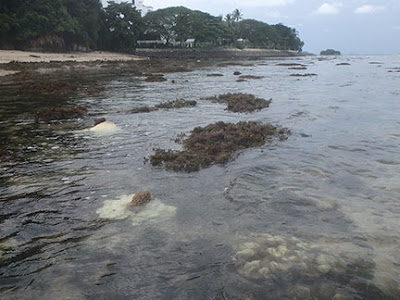 Mass coral bleaching in Singapore is not unexpected. From the NOAA's coral reef watch satellite monitoring, Singapore is in the blue Watch zone. But our corals are still bleaching. 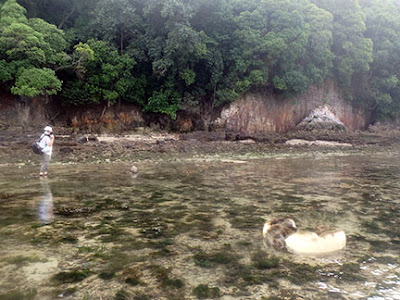 Coral are colonies of tiny animals called polyps. Each polyp lives inside a little hard skeleton. The huge colony is made up of the skeletons of countless polyps. The polyps of all reef-building hard corals harbour microscopic, single-celled algae (called zooxanthellae). The polyp provides the zooxanthellae with shelter and minerals. The zooxanthellae carry out photosynthesis inside the polyp and share the food produced with the polyp. Corals generally have white colour skeletons, which is believed to assist in photosynthesis by reflecting light onto the zooxanthellae. When there is massive loss of zooxanthellae in a hard coral colony, the polyps become colourless and the underlying white skeleton shows through. Thus patches of the colony appear pale, white or 'bleached'. The polyps are still alive and the hard coral is not dead (yet).
Hard corals harbouring zooxanthellae live close to the upper limit of temperature tolerance. Thus a temperature increase of even 1-2 degrees centigrade can redust in bleaching. It is believed that global warming will lead to massive bleaching. Once the cause of bleaching is removed, however, polyps may eventually regain zooxanthellae (which live freely in the water) and thus recover their health. But prolonged bleaching can kill corals and seriously damage large sections of a reef.
Factors believed to cause bleaching include: temperature fluctuations (too high or too low), excessive exposure to ultraviolet light, excessive sedimentation in the water, changes in salinity and disease. It is generally believed that bleaching is related to unusual prolonged temperature increases in the seawater.
I did see some corals that were not bleaching. There were many small to medium-sized colonies of Small goniopora coral, most were not bleaching. And a few small Flowery disk corals that were not bleaching. Small colonies of Crinkled sandpaper coral, however, mostly had bleaching patches. The tide wasn't low enough to properly see the corals behind Underwater World. But the water was clear enough to look at those next to Rasa Sentosa. Much of the shore near the beacon is still covered in layers of colourful sponges.

I saw a few leathery soft corals of various kinds. None of them were bleaching. 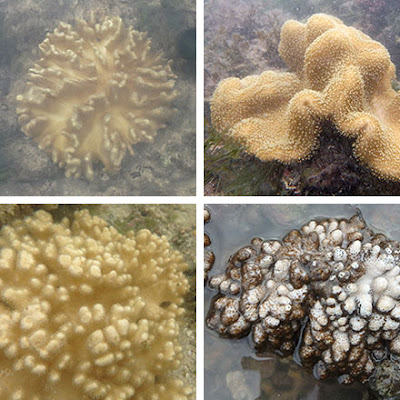 There are many patches of Fine feathery soft corals. About 50% of them were bleaching. 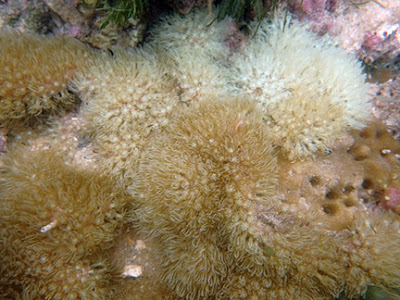 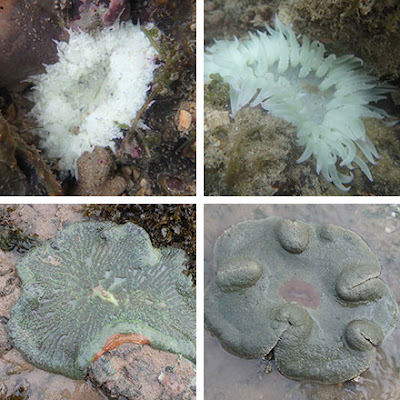 Here's a short video of the lovely marine life found on this shore in surprisingly clear waters. 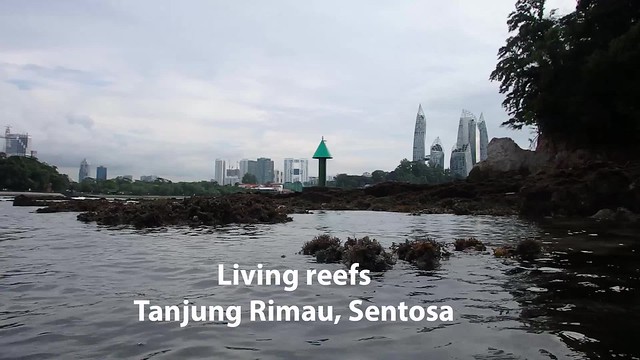 This natural Sentosa shore has among the last natural rocky cliffs in Singapore. Here, all manner of rare plants are found. Among them a young Nyireh laut which was nearly cut down accidentally by workers. I checked on it on our last survey in Apr 2016.  Today, it looked fine. Nyireh laut is Critically Endangered in Singapore and we probably have only about 7 trees on our shores. Thanks to Bian Tan for pointing out this young one to me. 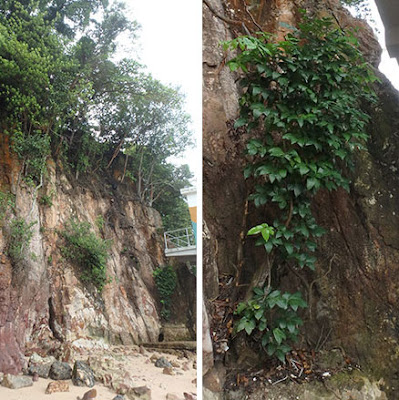 This shore also has lots of seagrasses. I checked the shore behind Underwater World as well as the shore next to Rasa Sentosa. There are still lush growths on both sides of Spoon seagrass (small leaf blades), Sickle seagrass and Tape seagrass (long leaf blades about 50-60cm). Needle seagrass (only near Underwater World). I saw very few Tape seagrass flowers though. The bloom of Bryopsis green seaweed on the Rasa Sentosa shore seems to be over, replaced by a bloom of Bee hoon green seaweed. 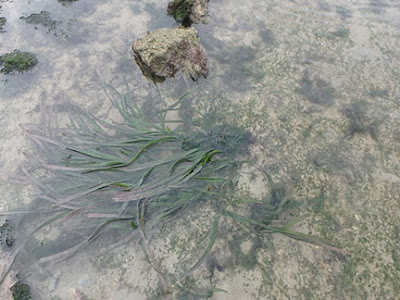 Alas, I noticed a few clumps of Tape seagrass floating in the water, that looked like they were broken off at the base. Is that why Tape seagrass on our other shores appear 'cropped'? What is causing this? 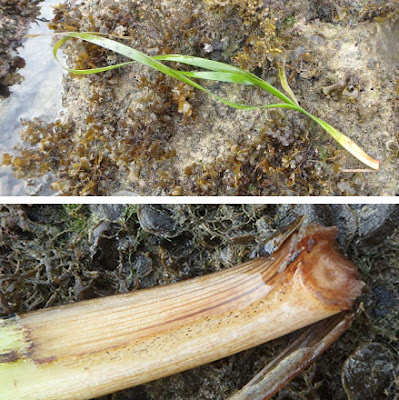 Because the shores are rather accessible, there are many threats to them. I saw a fish trap. I also saw many dead corals 'arranged' on the seawall. Was someone trying to collect them? 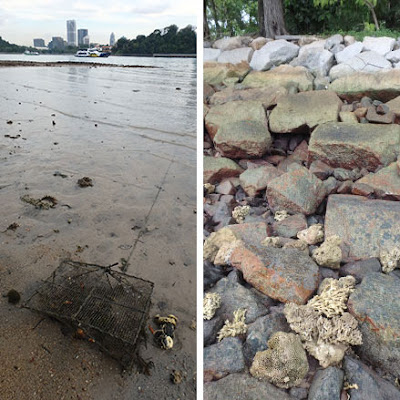 As usual, all kinds of trash wash up on the shore. But a large metal contraption that doesn't look like it floats might have been dumped on the shore. Balloons are heartbreaking to see on the shore as they are often eaten by marine life such as sea turtles who mistake them for jellyfish. The sea turtles eventually die a slow and painful death if their innards get blocked by the balloons and other trash. We removed this balloon and safely disposed of it in a proper rubbish bin. 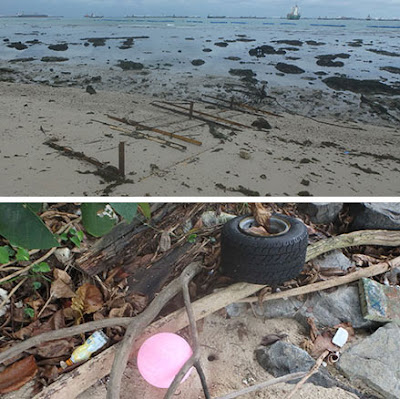 Speaking of sea turtles, alerted by a post by Ivan Kwan yesterday, I had a look at display just outside the Underwater World aquarium and yes, there were still about 8 large sea turtles there. The aquarium is now closed. I hope someone is looking after the sea turtles? What will happen to them? 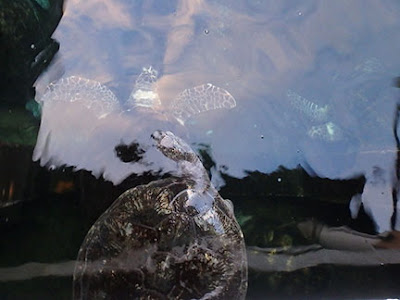 Yesterday, the Nature Society held a walk on this shore for kids. Some of our regular surveyors helped with the walk. Here's some photos shared by Lena Chow. 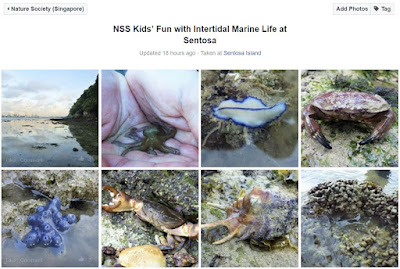 This is a great way to connect kids with their shores. Hope they will grow up to do more to protect them.