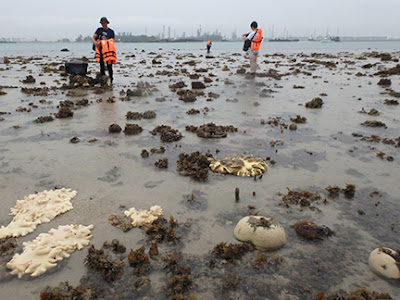 The survey team estimates about 50% of the hard corals we saw were bleaching, 50% for leathery soft corals and 10% for sea anemones. I was delighted to see lush seagrass meadows in the middle of the submerged reef! 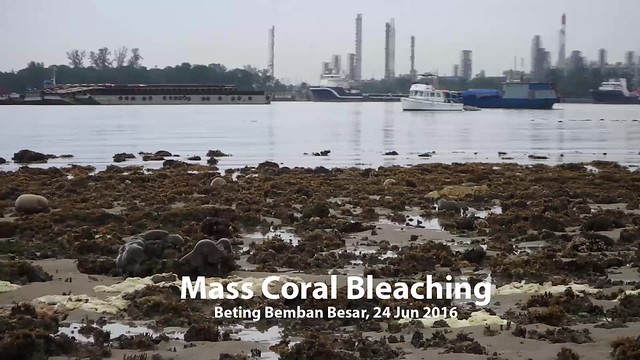 Coral are colonies of tiny animals called polyps. Each polyp lives inside a little hard skeleton. The huge colony is made up of the skeletons of countless polyps. The polyps of all reef-building hard corals harbour microscopic, single-celled algae (called zooxanthellae). 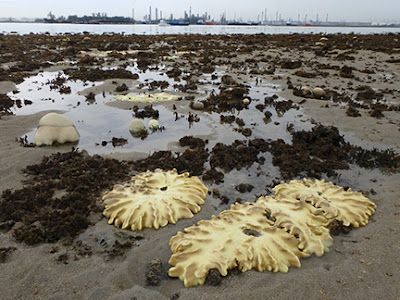 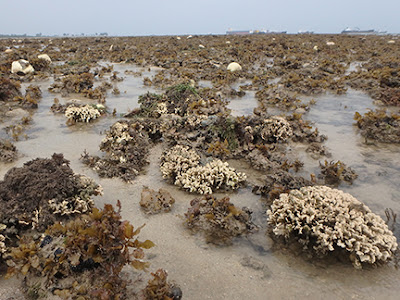 When there is massive loss of zooxanthellae in a hard coral colony, the polyps become colourless and the underlying white skeleton shows through. Thus patches of the colony appear pale, white or 'bleached'. The polyps are still alive and the hard coral is not dead (yet). 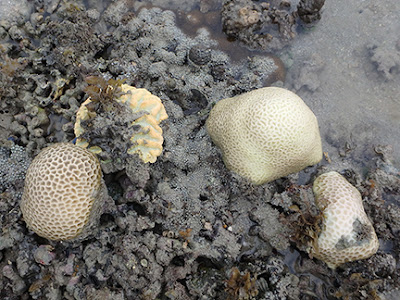 Without the food provided by the lost zooxanthellae, the polyps will be stressed and prone to diseases. Skeleton production and reproduction are also affected.
Once the cause of bleaching is removed, however, polyps may eventually regain zooxanthellae (which live freely in the water) and thus recover their health. But prolonged bleaching can kill corals and seriously damage large sections of a reef. Factors believed to cause bleaching include: temperature fluctuations (too high or too low), excessive exposure to ultraviolet light, excessive sedimentation in the water, changes in salinity and disease. It is generally believed that bleaching is related to unusual prolonged temperature increases in the seawater. 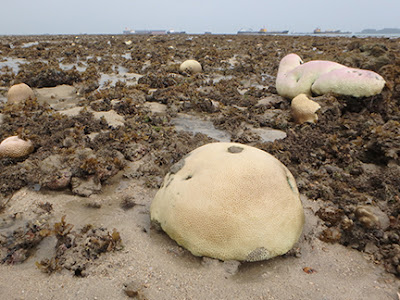 Hard corals harbouring zooxanthellae live close to the upper limit of temperature tolerance. Thus a temperature increase of even 1-2 degrees centigrade can redult in bleaching. It is believed that global warming will lead to massive bleaching. We estimate about 50% of the hard corals were bleaching. 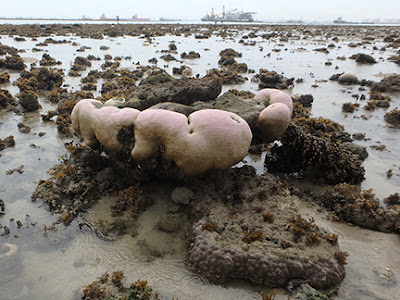 Bleaching corals are often found right next to corals that are not bleaching. Most of the Anemone corals I saw were alright, with about 10% that was bleaching. I saw several colonies of small Goniopora coral they had yellowish patches. 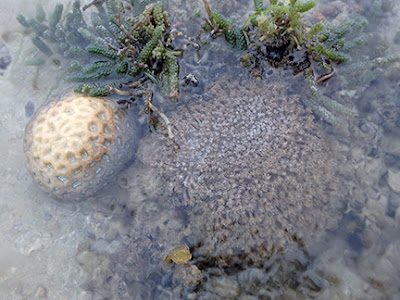 All the brain corals I saw were bleaching, some had spectacular colours. Only about 5% of the Boulder pore corals were bleaching. Most of them were alright or just a little pale or pinkish. Many of the Merulinid corals (previously Family Faviidae) were alright, even those growing on the seawall. But some of large colonies were bleaching. 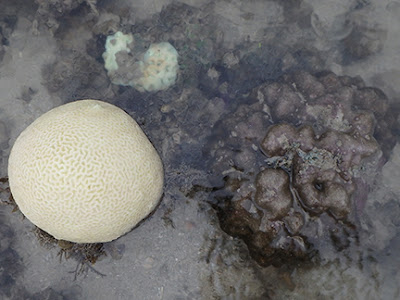 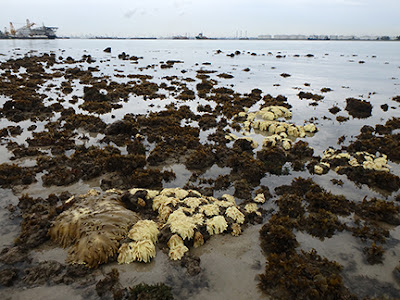 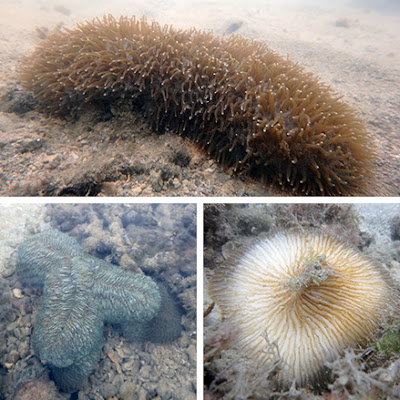 I saw several large colonies of disk corals and all were not bleaching. About 50% of the Flowery disk corals I saw were bleaching. 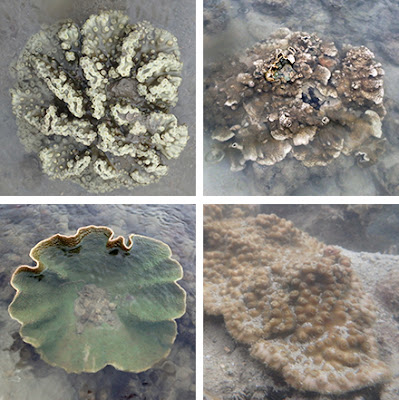 The Terumbus often have corals that are less commonly seen, such as Galaxy coral, Carnation coral, Lettuce corals. Those I saw were alright. I also saw what looked like a Lithophyllon mushroom coral, and it was bleaching. 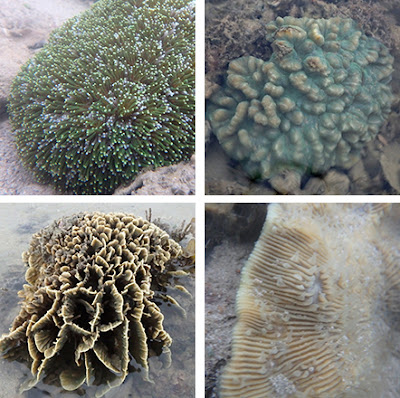 I saw several colonies of Anchor corals  and surprisingly, most of them were not bleaching. These were the ones I saw bleaching.

I came across several Cauliflower corals and they were all bleaching. I saw several Crinkled sandpaper corals and most were very pale.

I saw several small colonies of various Acropora corals. Most were partially bleached.

Bleaching doesn't just hurt the corals, but also the animals that depend on them. This Acropora coral is half dead, the white bleaching portion probably still alive. It was only when I processed the photo that I saw the Broad-barred acropora goby. This little green fish lives only in the hard coral. It is tough and can survive out of water during low tide. But it won't survive long if its host coral dies. 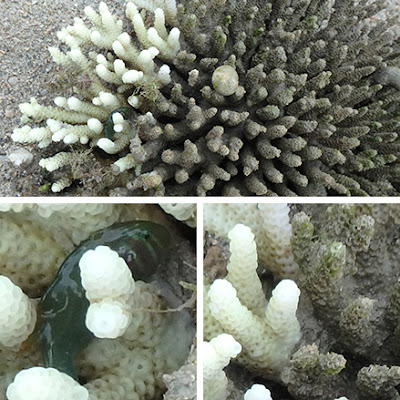 The reef is home to many animals. Like this Reef octopus. What will happen to them during mass coral bleaching? 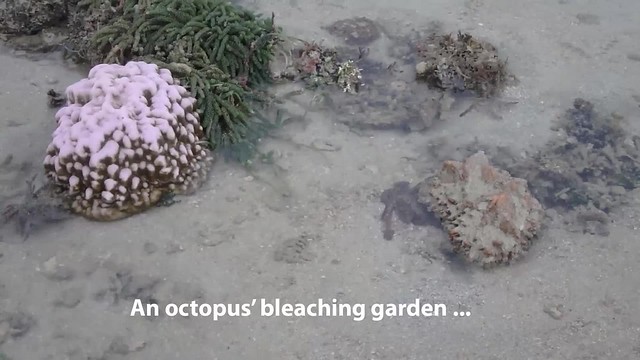 The patch of branching Montipora corals that we saw on our last survey in Jun 2015 are still alive and well. Most of it was not bleaching! 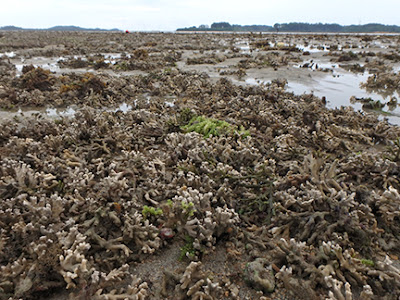 Here's some bleaching animals among the Branching montipora, a small colony of Flowery soft corals, the only one I saw today. And a small bleaching Merulinid coral.

A nice surprise today was to see lush seagrass meadows in the sandy areas in the middle of the submerged reef. During our last survey in Jun 2015, I only saw some patches of seagrasses which were heavily coated in epiphytes. Today I saw patches of lush seagrasses that were fresh and green! 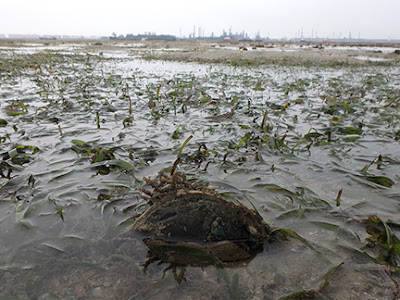 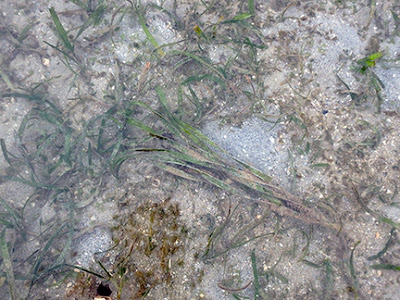 Here's a video of the seagrass meadows I saw at Beting Bemban Besar today. 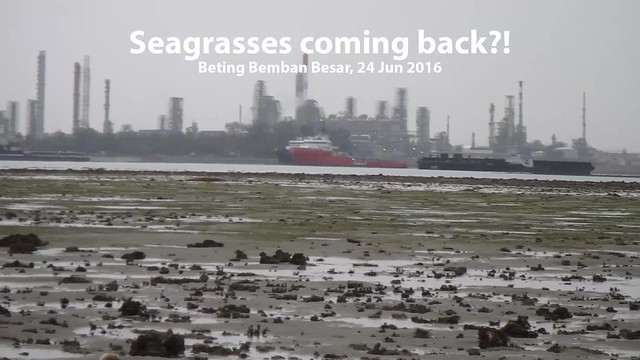 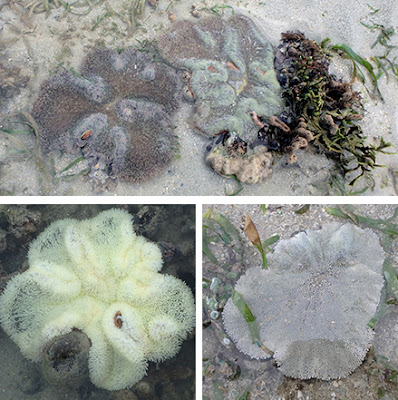 This submerged reef lies opposite Pulau Semakau. Alas, we didn't see any Knobbly sea stars though I looked in the same area where we saw them during our last survey in Jun 2015. But I was glad that we did not find any nets or traps on the shores.

Tomorrow is the last survey for this lunar cycle. We are going to visit Pulau Tekukor for the first time in many years.


Others on this trip: Stephen Beng.