A freighter carrying 560 metric tonnes of bunker fuel sank in Indonesian waters in the Singapore Strait, 11km north-west of Batam. Singapore islands nearest the site are Kusu Island, Lazarus Island, St John's Island and the Sisters Islands.
According to media reports, "Maritime and Port Authority of Singapore (MPA) said there is no disruption to shipping traffic or reports of any oil spills in the Singapore Strait currently. Still, the MPA has readied anti-pollution craft on standby."

Oil spill alert. Please let me know if you spot signs of a spill near or at the islands above. 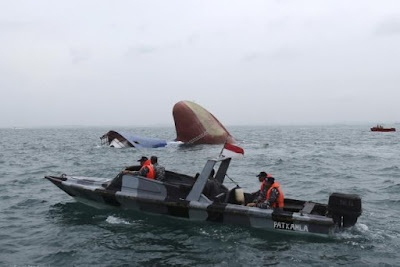 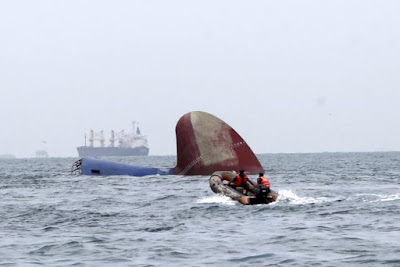 An Indonesia rescue team approaches the sunken Antigua and Barbuda flagged freighter MV Thorco Cloud which sank after colliding with a tanker the night before, in the Singapore Strait off the Indonesian island of Batam December 17, 2015 in this photo taken by Antara Foto. REUTERS/M N KANWA/ANTARA FOTO

The trajectory of the two ships are captured in this YouTube video by Vessel Finder.
More info from media reports: The incident had occurred at 8.14pm on 16 Dec 2015 in Indonesian waters when freighter “Thorco Cloud” collided with chemical tanker, “Stolt Commitment”. The tanker sustained minor damage, but is in stable condition.

Meanwhile, the MPA has issued navigational broadcasts to vessels in the vicinity to keep clear of the area and to report any sightings of the missing crew members.

Thorco Cloud has sunk after the collision 17 Dec 15

We are extremely sorry to confirm that our ship Thorco Cloud, a multipurpose carrier, sunk yesterday after having collided with the tank vessel Stolt Commitment from Stolt Tankers. There were 12 crew members on board and six of them were rescued shortly after the collision with help from the Maritime and Port Authority of Singapore, the Police Coast Guard and Stolt Commitment. Six crew members are still missing and the search and rescue is ongoing. The involved families have been notified. At the moment our primary focus is to find our crew and our thoughts go out to the families still in a state of uncertainty.

The collision happened yesterday on December 16 at 8.14pm local time in the high-traffic area of the Singapore Strait. Thorco Cloud was primarily loaded with steel and headed for Brazil. Our board and management are duly informed and are following the development closely. At this time, there are only limited details and information available. An investigation of the accident and a sea inquiry is currently being conducted and as soon as we have more information, we will update you accordingly.

Below you find details on the vessels involved:

We hereby provide you with the latest information and details about the tragic incident that took place December 16, when Thorco Cloud after a collision sank in the Singapore Strait. We are still searching for the six missing crew members, and our deepest sympathy and thoughts go out to their families.

We have received official statement, from the Department of the Maritime and Port Authority of Singapore (MPA), which contains details of how the accident happened. You can acces the statement from the link below.

Furthermore, Indonesia has now taken the lead concerning the investigation of the accident, and at the moment, the Captain is being interviewed by the investigators together with the Thorco Shipping appointed lawyer. The Antigua & Barbuda Flag State is contributing in relation to IMO casualty code for fact finding, and witnesses has been interviewed by them as well. It is our hope that the VDR (voice data recorder) will be released today for investigation purposes. Diver will be requested to investigate the wreck at first daylight if possible. Moreover, the local authorities have activated an oil pollution alert and the situation is under control.

The MPA stated the following this morning:

- From what is known so far, the incident reportedly took place on 16 December 2015 at 2014 hours (Singapore time) in the eastbound lane of the Traffic Separation Scheme (TSS) in the Singapore Strait (Indonesian territorial waters) 6 nautical miles north-west of Batam. The Thorco Cloud was attempting to cross the TSS from South to join the westbound TSS, while the Stolt Commitment was transiting the eastbound TSS [Approximate position of collision – 01 deg 12.23’N 103 deg 54.2’E]. The chemical tanker sustained minor damage and is reportedly in stable condition.

- According to RCC Tanjung Pinang (BARSARNAS) a search covering a radius of 10 Nm from the incident site was being conducted. They have recovered 2 life rafts, 1 lifeboat and the EPIRB from the MV Thorco Cloud. MPA’s hydrographic surveys revealed that the Thorco Cloud had broken into 2 sections. The stern section was located on the seabed where the ship sank. Depth over the wreck is 39 metres. Although there is no impact to surface navigation, all ships have been advised to keep clear of the sunken wreck. The bow section of the ship is still visible and has grounded about 1000 metres to the east of the sunken stern section.

- While there are currently no reports of any oil spill, MPA has also put anti-pollution craft on standby.

Having reviewed the media and press releases, a video on YouTube has been discovered showing the AIS courses of M/V “THORCO CLOUD” and M/T “STOLT COMMITMENT”:
https://www.youtube.com/watch?v=MzVQqBXQ4r8

We hereby provide you with the latest information about the sunken Thorco Cloud. First of all, we are sorry to report that we do not have anything new on the six missing crew members, but a search and rescue are still ongoing in the local area. Our thoughts go out to their families who were gathered the day before yesterday at Marlow, the crew provider in Manila. The six surviving crew members are also gathered at Marlow for an internal debriefing. They have received medical treatment and examination and have furthermore been interviewed by the authorities. They will as soon as possible be travelling back to their families.

The first diving survey has been completed, which have resulted in good 3D images (below). The images reveal that Thorco Cloud reportedly has broken into two pieces, divided with 1600 meters. They furthermore show that the wreckage is stabile. Only minor oil leakage has been reported and the situation is under control by the local authorities. A wreckage and bunkers removal plan is currently being devised. Site scanning and ROV investigations are expected to be completed soon. We are working on getting a full overview of the entire situation to be able to comment further. We are sorry to report that we have been informed by local search and rescue teams that over Christmas three lifeless bodies were recovered relatively close to the wreckage of Thorco Cloud in the Singapore Strait. One of them has been officially identified as one of the six missing crew members from Thorco Cloud. We are deeply affected by the loss the family has suffered and our deepest sympathy and thoughts go out to the them, as well as to the families still in a state of uncertainty. DNA samples and personal records have been forwarded to the authorities to affirm the identity of the other two recovered, and if they are related to Thorco Cloud. The search for the remaining missing crew members continues unabated, as well as the authorities’ investigation.

December 29 we released information that three lifeless bodies had been recovered by local search and rescue teams near the sunken Thorco Cloud in the Singapore Strait. One of them was already then identified as one of the six missing crew members on board Thorco Cloud, when it collided with the tank vessel Stolt Commitment and subsequently sank. Today we can confirm that the two other ones recovered have likewise been identified as two of the initially six missing crew members. We are deeply saddened and want to express our sincere condolences to the families grieving the immeasurable loss they have suffered and likewise to the families still in a state of uncertainty. The investigation and potential salvage discussions are ongoing.

Copenhagen: It’s been six weeks since the multipurpose carrier Thorco Cloud sank in the Singapore Strait after a fatal collision with a Stolt Tankers vessel, in which three crewmen lost their lives and three are still missing.

Thomas Mikkelsen, the CEO and partner of Copenhagen-based Thorco Shipping, says there’s no new information regarding the collision – as of yet. However, they are in close contact with the local authorities regarding the ongoing investigation.

“Thorco Cloud was hit in the starboard side and subsequently sank within few minutes. Currently an investigation is still ongoing and until all the loose ends have been gathered and we have the full picture, we cannot say much about what exactly caused the collision”, Mikkelsen explains.

The tragic sinking has left several families without their beloved ones, and Mikkelsen says they are working closely with the crewing agent to ensure that the families and the surviving crewmembers are being cared for.

“It has been a tragic incident with the worst thinkable outcome. The fact that three crewmembers lost their lives and three have not been found, is the worst thinkable for a shipping company. We are deeply affected by the immeasurable loss their families have suffered and our deepest sympathy and thoughts go out to the them”, Mikkelsen tells Maritime CEO.

Thorco Shipping is currently awaiting any news regarding a possible salvage of the wreck. However, the company expects to have a clearer picture of the situation during February.


Media articles on the collision

Oil spills on our Southern Islands

Our Southern Islands including the islands of our Marine Park lie close to the Singapore Strait, a major shipping lane connecting the Indian Ocean and the Pacific Ocean.
Large vessels from the Middle East, India to China, Japan and Korea ply this route.
We are fortunate there is no major oil spill from this recent accident.

More posts about oil spills in Singapore.
Posted by Ria Tan at 10:56 AM