A bumper crowd of more than 100 visitors joined the last Naked Hermit Crab tour of the Chek Jawa boardwalk for the year! We saw a snake and lots of other cool critters. 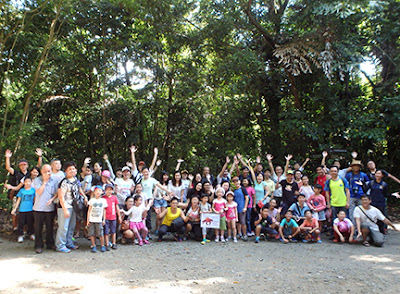 The tide was super high, a great opportunity to debunk the idea that you can only enjoy Chek Jawa during low tide.

A special treat even before the walk began. One of the kids had spotted a snake on the ground near House No. 1. It is a Keel-bellied Whip Snake which lives high up in trees and thus rarely encountered on the ground. So we decided to put it back in the forest. Along the way, we took the opportunity to let the kids have a closer look at it. 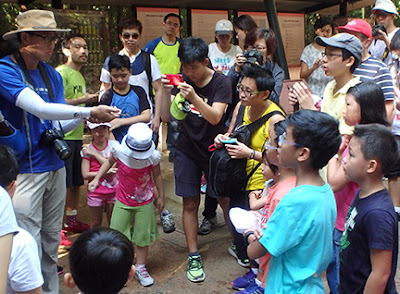 Ivan shares stories about the snake with everyone. While snakes are beautiful and generally will not harm people, we should NOT handle snakes if we don't know how to do it. This is both for the safety of the snake as well as ourselves. 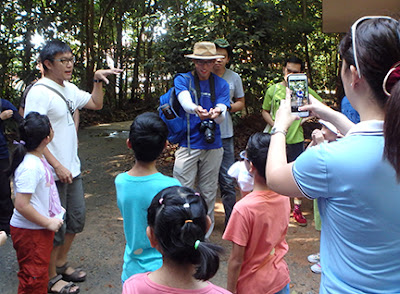 The snake remained calm throughout the brief encounter, and was soon gently released into the forest where it belongs. 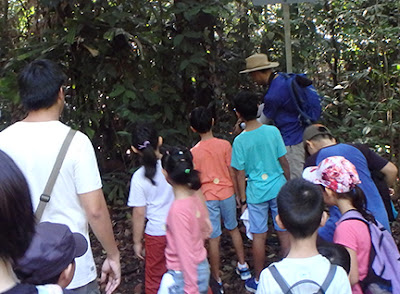 The tide is so high today that the 'Rhino Rock' at Ubin Jetty is barely peeking out of the water. 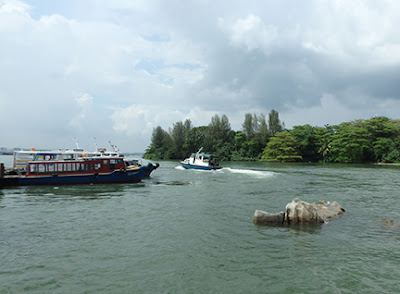 In the back mangroves, the incoming high tide results in a much livelier animals. These are usually hidden away when its hot and dry. The whoosh of water gets them all excited. There were many tree climbing crabs and several Giant mudskippers. 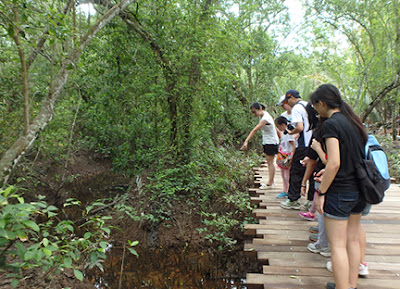 The tide was predicted to peak at about 3m for the day. This brings the water surface closer to the boardwalk and makes it much easier to spot marine life swimming in the water! 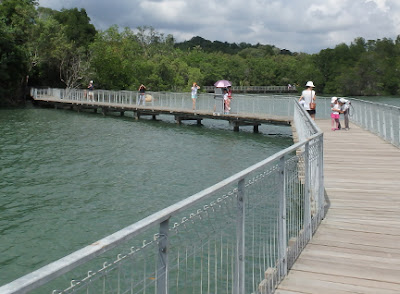 Like these needlefishes swimming among the Nipah palms at the seaward side of the mangroves. 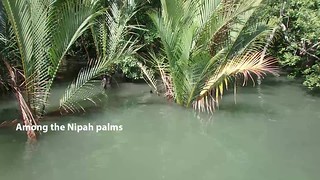 At high tide, small creatures like snails and mudskippers get out of the water where there are predators to eat them. They are much easier to spot as they cling to roots and rocks. 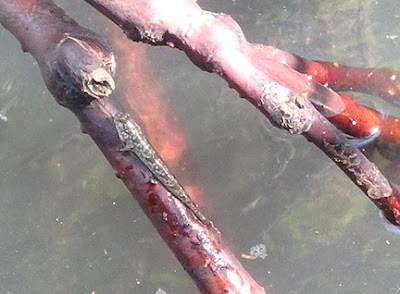 It's fascinating to see the waves wash up so close to the boardwalk! The young ladies are very well prepared for the walk! They brought along a stash of BP Guidebooks! These nature guidebooks are a great treasure for exploring our wild places! 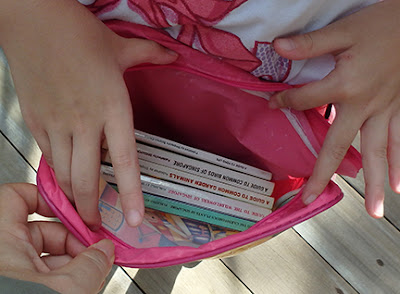 This young gentleman not only found many interesting things but also shared them with all the other people in the group. 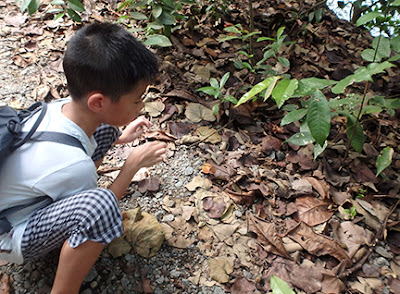 Among his awesome spotting is this small dragonfly which is so transparent we all missed it. There were also some small spiders and many Cotton stainer bugs. 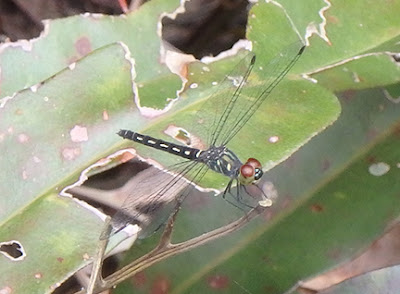 One of the kids spotted this pretty ladybird beetle on the boardwalk railings! 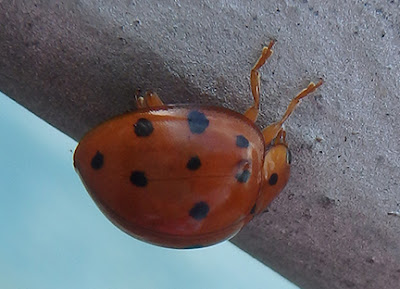 We really enjoyed the lovely sunny morning. There are stunning views from the Jejawi Tower! 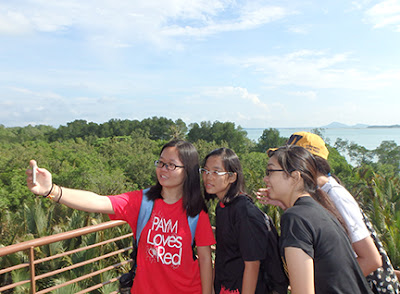 Besides the marine life, Chek Jawa also has special coastal forests. The beautiful Delek air trees were blooming. These trees are Critically Endangered in Singapore and Chek Jawa is one stronghold for them. Alas, looks like the Cheng teng tree may be dead. On walk here last month, it was already crispy. Also called the Malva nut (Scaphium macropodum), it is listed as Endangered in Singpaore.More about it on Uncle Tony's Flora Singapura website. 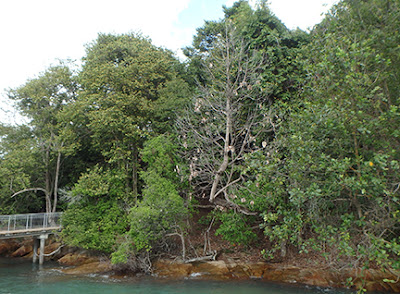 At the end of the walk, everyone shares their thoughts through drawings. My favourite drawing is by Clara! 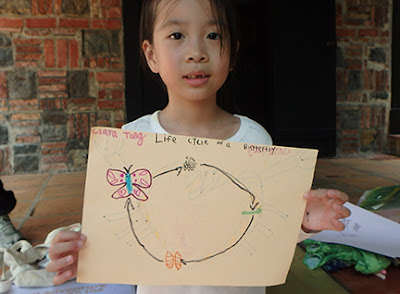 The wild boar family is still hanging around the Chek Jawa entrance. The young wild boar are all grown up. As usual, if we do not feed the animals and do not disturb them, they are quite peaceful towards humans. 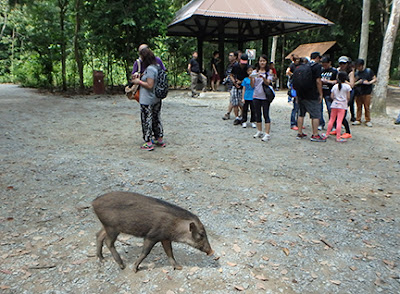 On the way home, the water looks a little tinged with brown. A sign of plankton bloom? Recently, there were sightings of a few dead fishes in the East Johor Strait. Pollution, litter and other stresses affect water quality around Pulau Ubin. 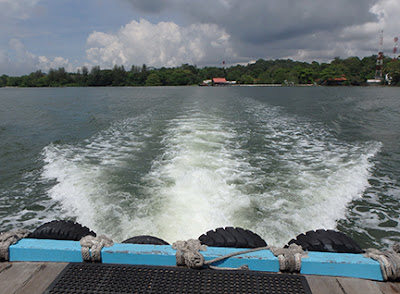 The Chek Jawa shores are cleaned regularly (otherwise visitors will complain), but there is a constant flow of trash coming in. Including large bags such as this one that used to contain fish meal, probably from one of nearby fish farms. The 60 licenced fish farms off Pulau Ubin are not provided with trash collection. 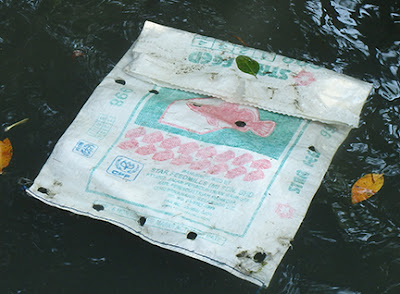 The high tide brings the water very close to the 'Rubbish Jetty' at Pulau Ubin used by NEA. This makeshift jetty that looks rather ricketty is used to store trash collected by NEA contractors from Pulau Ubin before it is transported to the mainland. 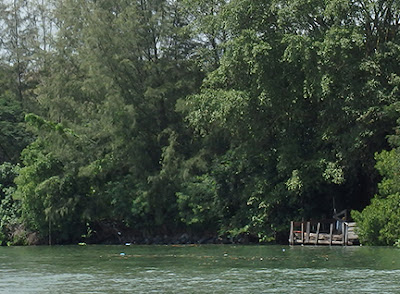 There were two fish farmers nudging some kind of floating platform towards the area at Changi which they use to load and unload. 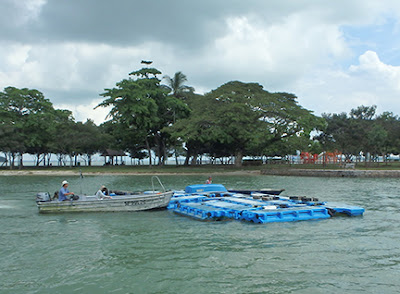 The Naked Hermit Crabs will take a break in January and the free monthly guided tour of the Chek Jawa boardwalk will resume in Feb 2016. Check out their blog for the latest updates.
Posted by Ria Tan at 12:05 PM