Checking up on Big Sisters Island

Now a Marine Park, Big Sisters Island lies just 15 minutes from the main business district on the mainland, all aglow during our predawn trip. 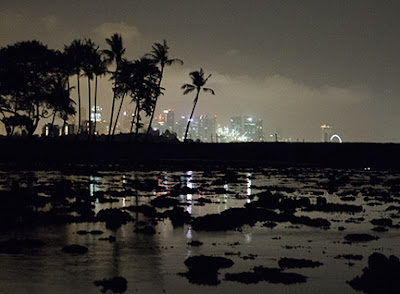 Today I saw lots of fishes, but I sense there are far fewer corals than on our previous surveys. My recent visits to Big Sisters Island were mostly related to guiding or training guides. This is the first time since July 2013 that our team does our usual survey of the island.


Everyone's favourite fish is the 'Nemo' or False clown anemonefish. I was glad to see some in several Giant carpet anemones. While these fishes are easy to spot during daytime trips, most reef fishes are shy. A night trip allows us to encounter and more easily photograph a wider variety. A Scissortail sergeant which so far I only commonly see on Big Sisters Island. 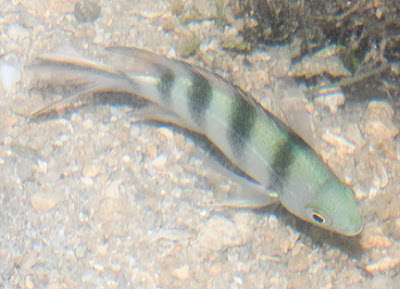 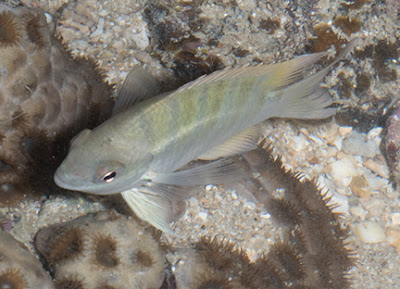 This Bengal sergeant appears to be injured. There were also many small halfbeaks and abundant Tropical silversides. 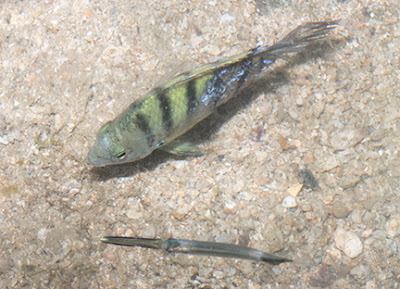 An Orbicular cardinalfish which I have commonly seen only at Big Sisters Island and on Pulau Hantu. 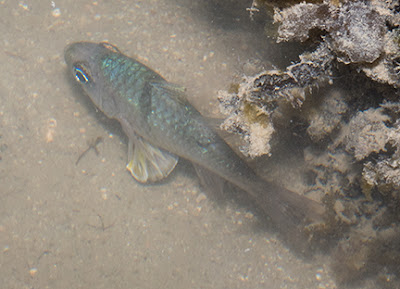 A Spangled emperor. Indeed, many of our reef fishes are glittery and gleam with a rainbow sheen. 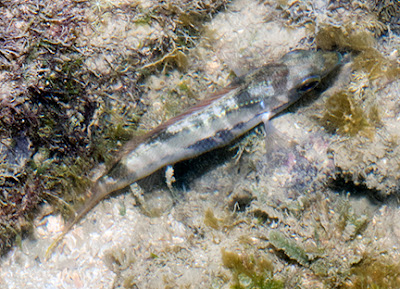 Some fishes are very well camouflaged like this Frill-fin goby. 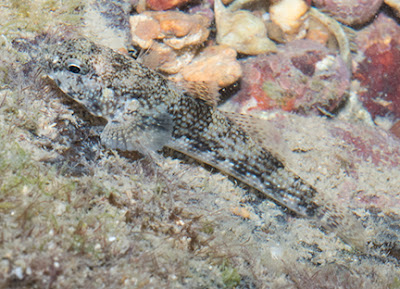 A pair of Seagrass filefishes which blend superbly with their surroundings. 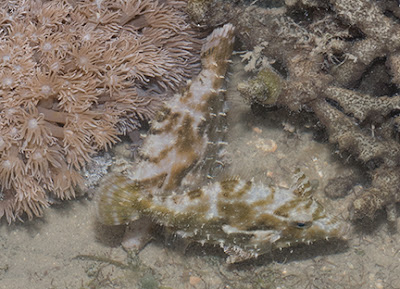 I also saw many fishes that I am not familiar with. Please leave a comment if you can identify them.
I saw many of this beautiful greenish fish.
Alas, we are sad that we did not come across any seahorses. Although Kok Sheng saw a baby shark.

Some interesting sightings include this this large Olive snail. The first time I've seen it outside of Cyrene Reef! 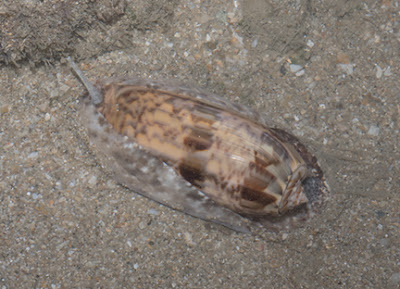 This is the only nudibranch I saw, some kind of Gymnodoris. We looked but couldn't find any living Giant clams on the intertidal today. I saw a few Spotted black flatworms. 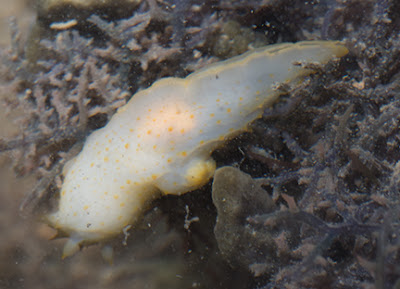 In the crevices of the seawall, I saw a large Diadema sea urchin as well as a few tiny ones. There were also many Long black sea cucumbers and a few Big synaptid sea cucumbers. 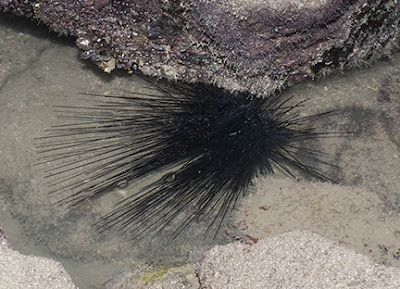 Busy at night among the coral rubble were many small Reef octopuses which are so well camouflaged that I only spot them when they move. 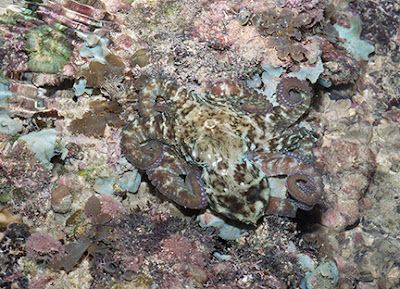 The Land hermit crabs are more active at night. On the high tide line I saw many, including this cluster. I thought they were about to exchange shells, but it turned out they were quarreling over food. 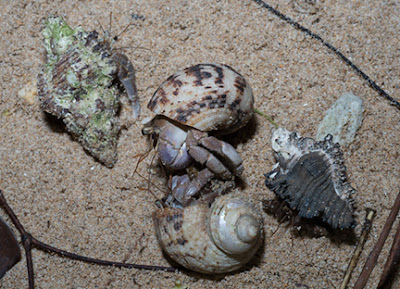 We are surprised to see many Common sea stars in the big lagoon. Many of them were paired up. Perhaps this is because the big lagoon has become much sandier? 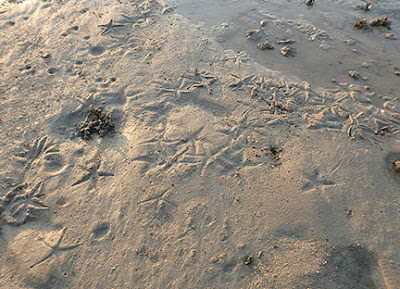 There are still some large healthy corals on the reef flats. But I sense we saw fewer colonies compared to our trips in May 2013 and July 2013. The shore was much quieter than even my brief walk through in Apr 2014 when I was still recovering from a broken foot and didn't cover much ground. 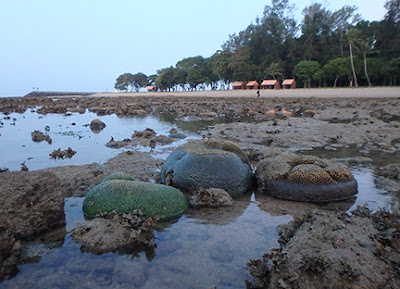 As usual, I check for coral bleaching. While I didn't come across any outright bleaching corals, many colonies were half dead. What is coral bleaching and why this is of concern on the Bleach Watch Singapore blog. Fortunately, the latest Bleaching Alert Areas from the NOAA website shows that Singapore now falls outside the 'Watch' status. Let's hope our corals have passed the danger period for the year.

As usual, the most abundant coral were boulder-shaped Favid corals. Most were alright although many had small pale or bleaching portions.

There were many Boulder pore corals and most were alright. Only a few were pale or had greyish dead portions. 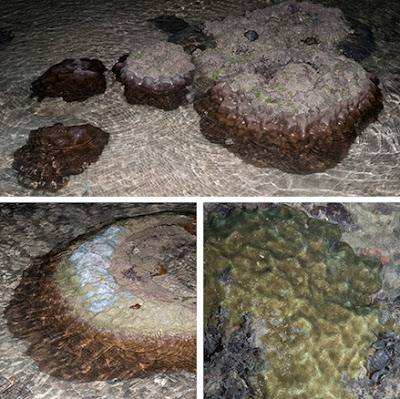 The large colony of Anemone coral in the middle of the lagoon is still there. This and the few other Anemone corals I saw were not bleaching. 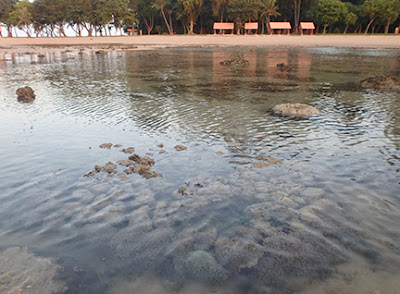 I saw two small colonies of Acropora coral. There were also some branching Montipora corals, they were not bleaching.

I only saw one colony of Cauliflower coral with the top portion dead. I saw several Crinkled sandpaper corals and they were alright.

I saw a few Brain corals and aside from slightly yellowish portions, most of them seemed alright, although their top parts were dead. 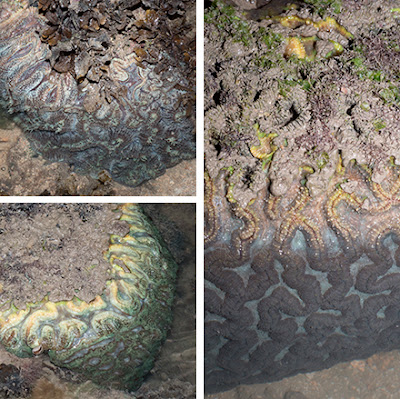 I saw a few Flowery disk corals and they were all pale or yellowish. But none were outright bleaching.

I saw a few colonies of Carnation coral, Ridged plate coral and Galaxy coral. The Anchor coral colony is half dead although there were living healthy portions. I also saw a small half dead Lettuce coral. Kok Sheng saw a few Circular mushroom corals. 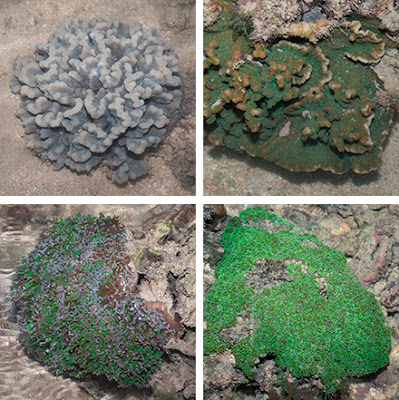 In the morning, we saw prints of a baby Long-tailed macaque. There are many wild monkeys on this island and they can be quite aggressive to humans who are alone. Pei Yan got bullied by some in the morning but she knew how to take care of herself. 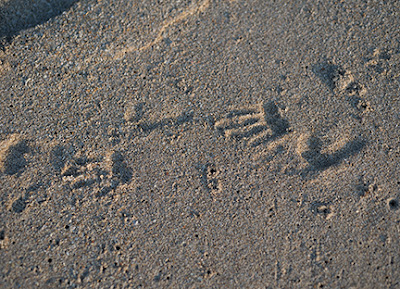 Seen today at the Big Sisters Islands Jetty, some sensible tips on courtesy in our Marine Park to protect our marine life and the ambience so everyone can enjoy the Park. I'm glad to see that finally, fishing and poaching is clearly disallowed. Today, we didn't come across any nets or traps. In Oct 2011, we came across two nets laid on the reefs which caused much damage. 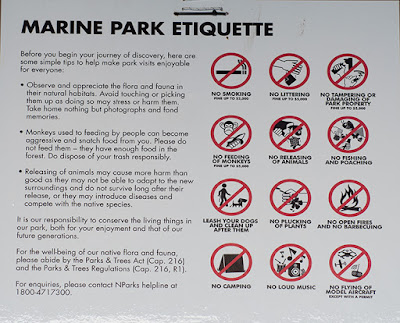 More about the Sisters Islands Marine Park on the blog and facebook page.