How delightful to come across several Masked burrowing crabs during quick visit to two Changi shores this morning. 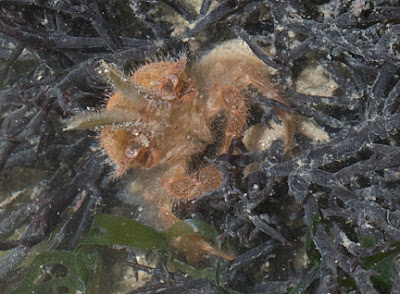 One shore was very sandy with not a wide variety of animals, while the other shore was lush with seagrasses and teeming with marine life.


The Masked burrowing crab does indeed burrow if it is placed in a sandy pool. And its pair of very hairy antennae appear to zip up together when the animal is buried, probably forming a breathing tube for the animal. Is this the season for this rare crab? Because we saw lots of them too on our last visit here in May 2014 and in Jun 2013. 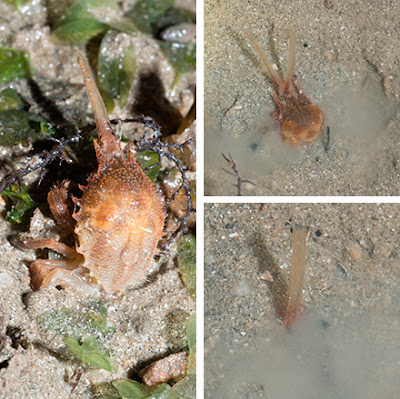 I saw one, and the rest of the team saw several, baby Knobbly sea stars. Just as we did in Jun 2015 when we visited this shore. 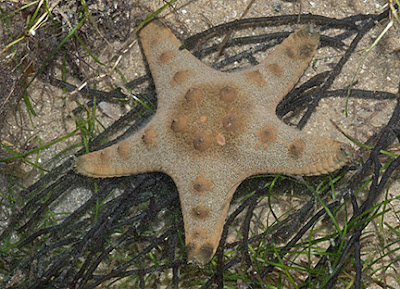 There were many Flat-armed brittlestars among the seagrasses. Also some tiny to small Biscuit sea stars, a few Painted sea stars and some very tiny Plain sea stars. We didn't see any other kinds of sea stars. 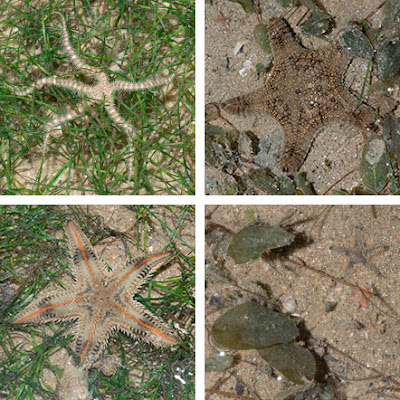 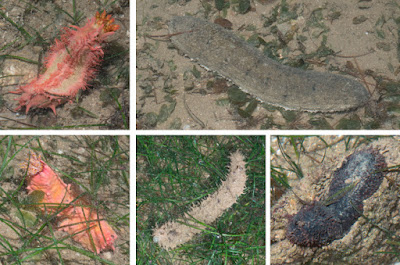 There were lots of large White sea urchins today. As usual, 'carrying' all kinds of things. So we have to be careful where we step to avoid crushing these animals. 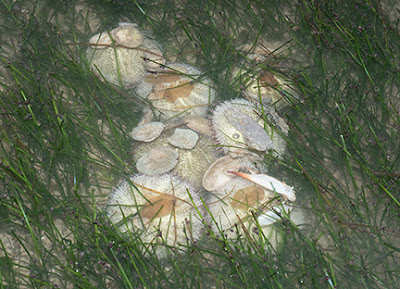 These sea urchins often have a kind of worm wrapped around the mouth on the underside of the urchin.

I saw a few large Haddon's carpet anemones. They had lots of tiny anemone shrimps. I didn't see any cerianthids and I only saw a few sea pencils, and one slender sea pen. 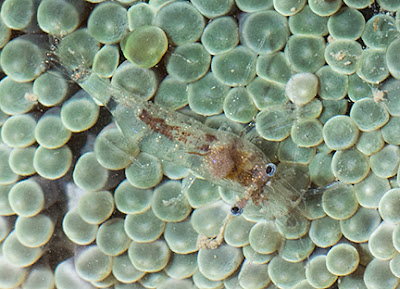 In one of the Haddon's carpet anemones, I saw a small Chequered cardinalfish swimming very close to the stinging tentacles. I've seen this fish do this before.

There were many small Longspined scorpionfishes. I saw a few small White spotted rabbitfishes and some juvenile Trumpeter perch. 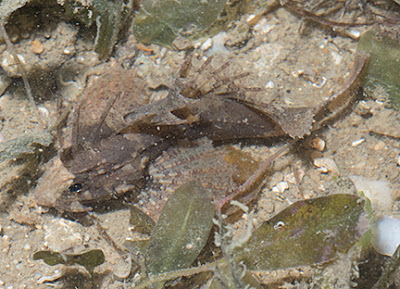 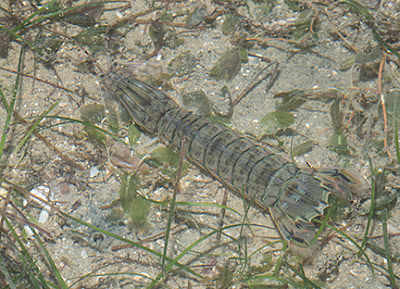 A gathering of Orange-stripped hermit crabs. I'm not sure what is going on here. I didn't see many of the other kinds of hermit crabs that I usually here such as the Lavender hermit crabs. 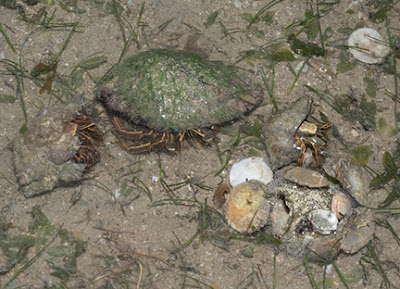 Among the snails I saw today were a Pink moon snail, Miliaris cowrie and a Mitre snail. I saw several Black-lipped conch snails and many Gong gong. There were also many Big brown mactra clams. I saw few live Hammer oysters, and some small Window-pane shells. There were also many small Fan clams. We didn't see any of the large snails such as the Noble volute. There were lots of Leaf slugs on the shore today, but we didn't see any sea hares or nudibranchs. 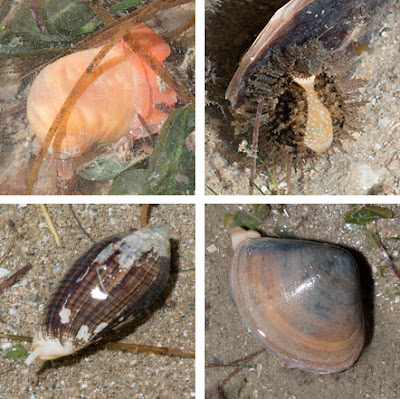 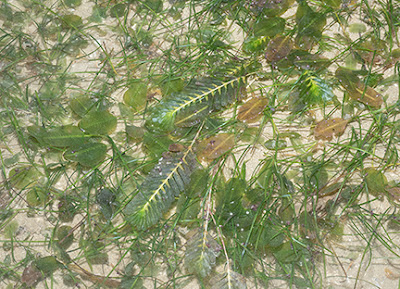 The seagrasses were teeming with tiny creatures. Like these super tiny snails. 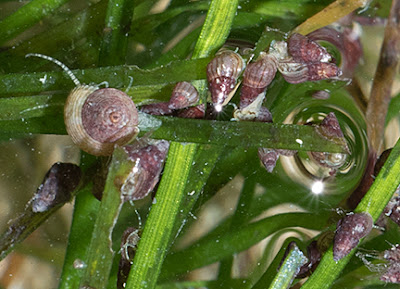 Here's some other tiny creatures I saw among the Needle seagrasses. 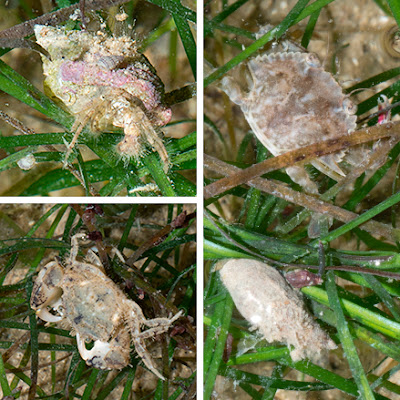 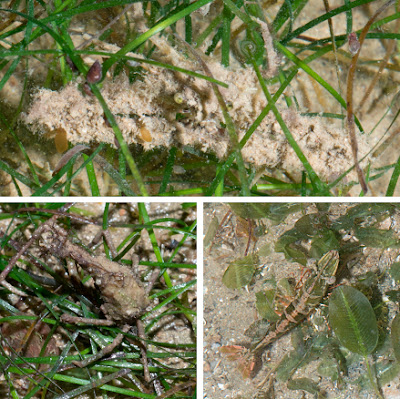 We started our morning on another very sandy stretch of Changi. There were a few Haddon's carpet anemones, one of them had a pair of the larger anemone shrimps. I also saw some Tiger anemones.

This shore had some small sparse patches of Spoon seagrass, Needle seagrass and Fern seagrass.

There were lots and lots of Sea pencils on this shore. But alas, even Chay Hoon couldn't find any of the nudibranchs that are believed to eat these Sea pencils. We also saw many Flower crabs large and small. And I saw one Moon crab.

Hiding next to the Sea pencil, a tiny filefish that looks like a seagrass blade. Alas, there wasn't much else on the shore so we decided to zip over to another shore at Changi. 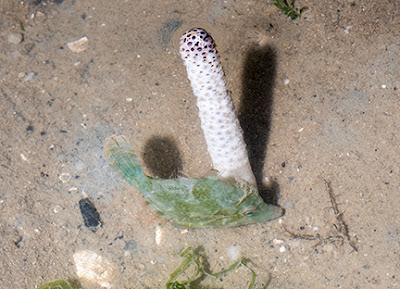 We moved to this Changi shore with lush seagrass meadows and spent most of the morning here. Having seagrasses does increase the diversity of animals that can be seen on the shore. But this shore has changed and we no longer see many of the creatures that we saw in Jun 2013. 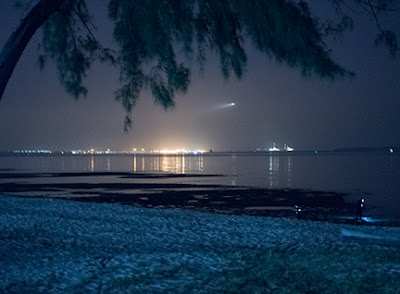 Today we were alone on the shore and didn't encounter other people. I saw some fishing lines, but no fish nets. Tomorrow, Koh Sheng will survey another part of Changi, while some of us head out to Pulau Hantu. Too many shores, not enough low tides!