Thanks to the kind support of nearly 40 people, I am able to print AND give out 36,000 copies of guidesheets to Singapore's shores! The marine community in action.
I've been asked why I don't raise the print cost through KickStarter or something similar. But it's not just about funding. I can't on my own, give out 36,000 copies within 1-2 years before they rot. I need the help of the marine community for these copies to reach families, kids, divers, kayakers, schools and many more people. Thank you!

I only needed help for 16,000 orders for the print to go ahead, but within less than 24 hours, I exceeded it and finally stopped the orders at 36,000 copies because I wouldn't know how to store more than that! The last time I asked for help in 2012, I only printed 5,000 copies.
All of this week, I have slowly been delivering the guidesheets. It was a great opportunity to meet up with old friends and meet new ones. Thank you everyone! 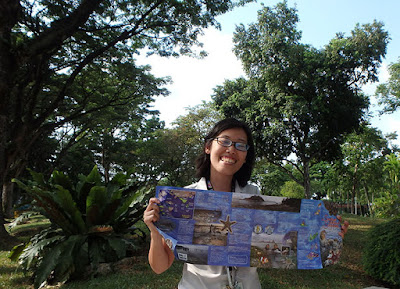 Thanks also to Joan Yeo who donated 500 copies and only asked for 1 copy of each to be snail mailed to her. And Zeehan Jaafar for donating 500 copies and another kind soul who wants to remain anonymous for donating $200 (which pays for 700 copies). Thank you! 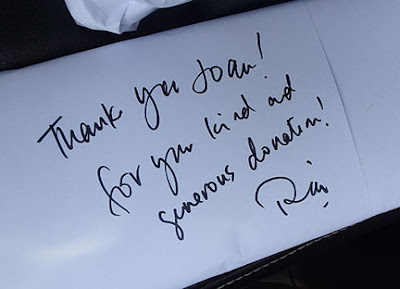 These donated copies will go to groups who do a lot of outreach but who do not have funding. Such as the awesome Hantu Bloggers who conduct guided dives at Pulau Hantu every month for 12 years. I was so glad to catch Debby Ng on her home trip to give her 1,000 copies for the Hantu Bloggers. 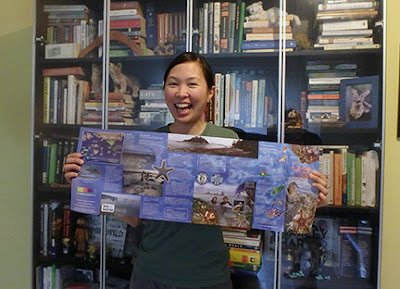 Another group are the Naked Hermit Crabs who conduct free guided walks for families at the Chek Jawa boardwalk every month for the last 8 years. They gave out the Northern guidesheet on Ubin Day to the 70 people who came for their walk.
The guidesheets made their debut on Ubin Day, both Northern and Southern guidesheets being included in the welcome pack for the 400 volunteers who helped make Ubin Day possible! Thanks to Min Lin for organising the packing with the FUN Ambassadors! 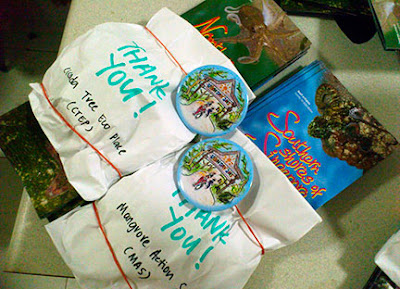 The Northern guidesheets were also given out on Ubin Day by member of the Restore Ubin Mangroves (R.U.M.) Initiative. It was so nice to see the kids looking at them. We also took the opportunity to pass the 500 copies that Alan Tan of Ubin NParks ordered. These will go out to the people he meets on Ubin through out his work. Thank you! 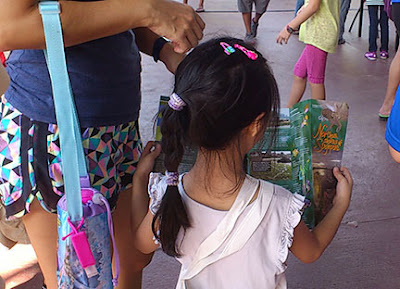 The poor little car was weighed down when I delivered the largest order of 4,000 copies. Thanks to N. Sivasothi for ordering 2,000 copies for his students at NUS and Alvin Wong another 2,000 copies for International Coastal Cleanup and Toddycats.  They will no doubt be given out during cleanups, walks, at exhibitions and their many other activities. I also took the opportunity to deliver the 200 copies to Chay Hoon. She goes for a lot of dives and other trips. 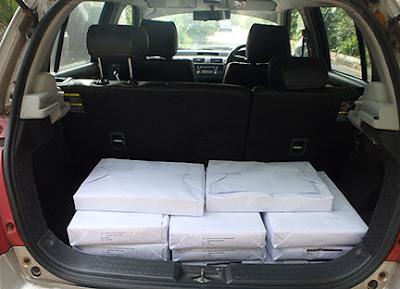 The other massive order was at NParks National Biodiversity Centre. Dr Karenne Tun took 2,000 copies and Dr Jeffrey Low took 1,000 copies. I'm sure they will go out to all kinds of people that I couldn't possibly reach. Thanks also to all the people who helped haul the order up the stairs! 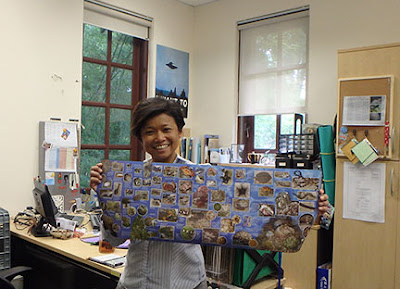 Ian Siah's 200 copies will go to all the kids and families who join him on his intertidal walks which he organises on his own. 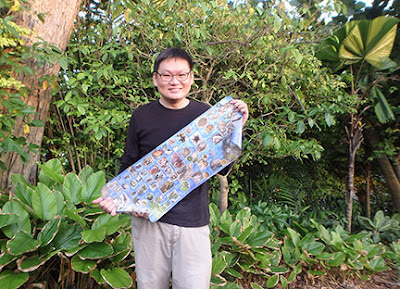 Thanks to Chua Li San for not only ordering 400 copies but also coming to The House on the Dark Side of the Moon (which is where people think I live) to pick them up. She will probably give them out at Outward Bound Singapore and at her many nature and welfare activities. 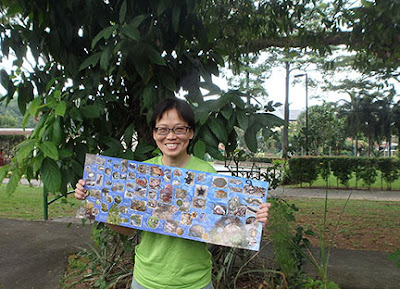 I was delighted to have the excuse to visit Cher Huey at his awesome KayakAsia store at Chinatown. He did up the floor and everything in the store on his own. I was so busy gawking at the array of booties, and cool outdoor gear, not to mention kayaks that fold up into a backpack. Huey's 1,000 copies will go out to all the people he meets and brings around on his wondrous adventures. Thank you! 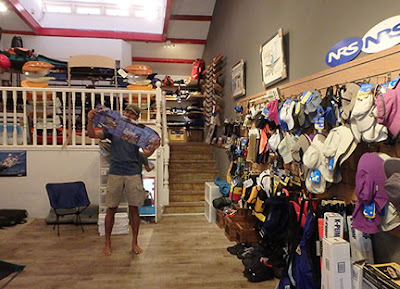 The very next day, was again awed by Stephen Beng's Sea Hounds dive shop. He also built the shop on his own. Besides dive gear of all kinds, he also sells books on marine life, and has a little classroom for dive training, a pantry where he makes a killer cup of coffee, and more. His 1,000 copies will go to divers and people on his cool trips. Thank you! 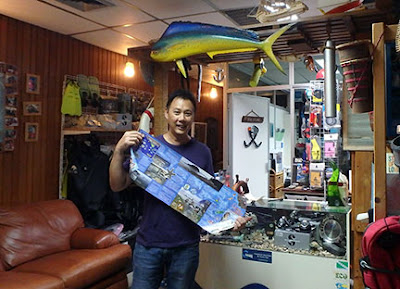 Esther Loo ordered 500 copies to give out to preschoolers at MindChamps where she works. Wow! I am sad that I just missed meeting her when I made the delivery. 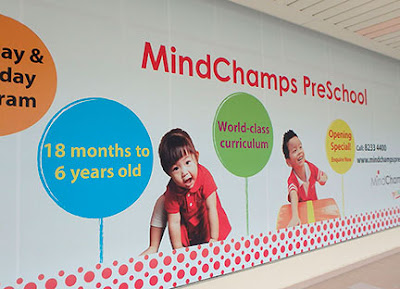 As school reopened in July I made lots of deliveries to many teachers who will be sharing the guidesheets with their students. Thanks to Loh Kok Sheng for sharing 600 copies of the guidesheets with his students at Dunman High School. For four years running, Kok Sheng has also been conducting a programme called EXCEL for his students to learn about nature and nature guiding together with the Naked Hermit Crabs. 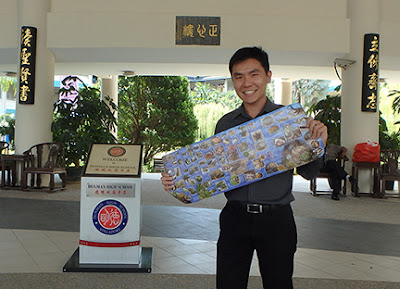 Finally I got to meet Teo Rui Xiang who has just returned from Africa and will share his 200 copies with his fellow classmates at the Bachelor of Environment Studies (BES) at NUS. I am so touched by his plans to personally share about the guidesheet before giving them away. He also plans to encourage his friends to share the guidesheet with others. Bravo! 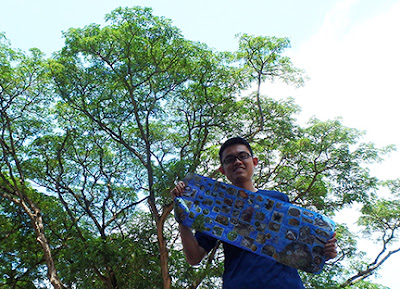 Loh See Ping will share her 500 copies with students at the Singapore Sports School! She teaches history there and is quietly trying to get the students to appreciate and learn more about nature. Hurray! 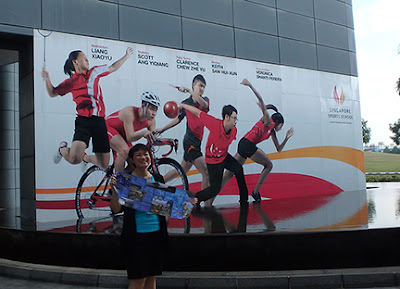 Tan Sijie and Dr Abigayle Ng of the Raffles Institution have been staunch supporters since earlier prints of the guidesheet. Sijie will share his 500 copies with his students at awesome programmes such as the Raffles Ecological Literacy programme that among others, produce delightful children's books about Singapore's native plants and animals. Abby donated 700 copies and took only 250 copies to share with her students. She runs the amazing Raffles Open Lab. Thank you! 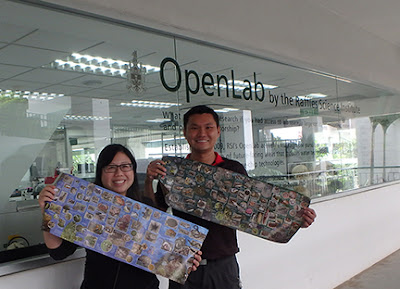 Nicholas Yap will share his 500 copies with the students he works with at the National Institute of Education (NIE). It was great to catch up with Nick who does awesome work like describing sea anemones new to science from Singapore! 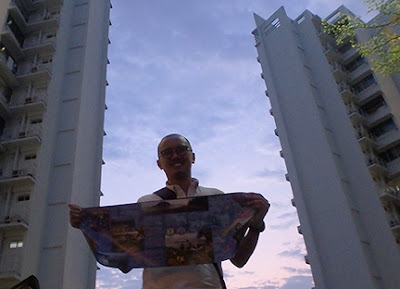 The low spring tide trips have started and yes, I should especially thank the team who do the regular shore trips even during ungodly hours. AND the wonderful skippers and boatmen who get us to our shores in strange ways. Without all of you, to find stuff and share them, I could not have taken the photos for our guidesheets. 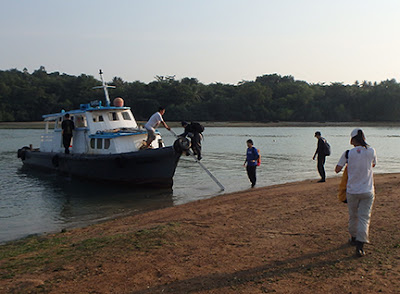 Some of the people who supported the print run are also part of the regular team who survey our shores at low tide! Like Russel Low who donated 1,000 copies! Check out Russels Singapore Reef Watch community on facebook. Mei Lin also affectionately known as Dr Glam Giant Clam will also share 500 copies in science and other circles that I couldn't possibly reach. She is ill and yet came by to fetch the copies from me. In the rush to transfer them, I forgot to take a photo of her! So sorry Mei Lin! 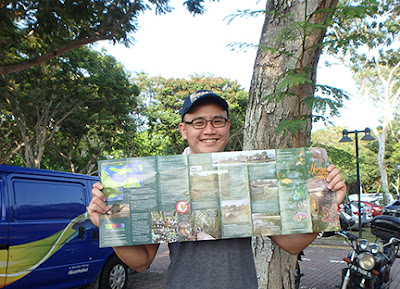 The morning low tides brought me to the east on a Saturday. A great excuse to visit Kelvin Lai of Adventurepaddlers. He and his friends are fixing up on their own, a lovely establishment for a seasports centre at Pasir Ris Park that will allow people to enjoy the sea from Pasir Ris to Pulau Ubin and beyond. He will be sharing the 500 copies with them, and also plans to paste them up on the walls. Wow, thank you! 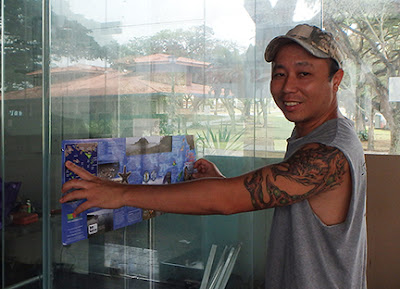 In between low spring tide trips and it's time to do more deliveries. July will share his 200 copies with the kids at the West Grove Primary School where he teaches. Thank you! 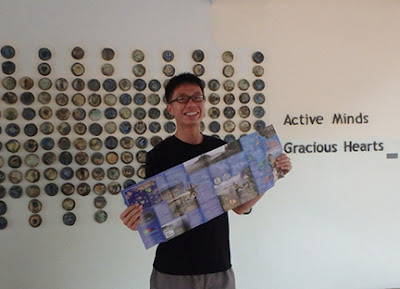 Dr Jean Yong took the trouble to pick up the 2,000 copies which he will share with the vast variety of people he meets in Singapore and all around the world. Dr Yong is a wonderful mentor to me and many others on everything from mangroves to life issues. He is an author of countless books and I'm so touched he is helping with the guidesheets. 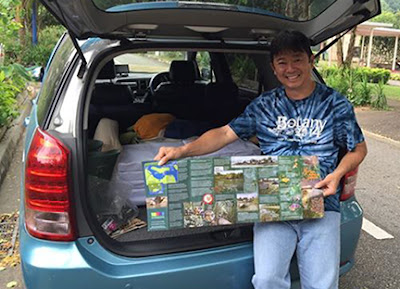 The very next day, Dr Yong posted this photo of his class with the guidesheets. I'm so deeply touched! 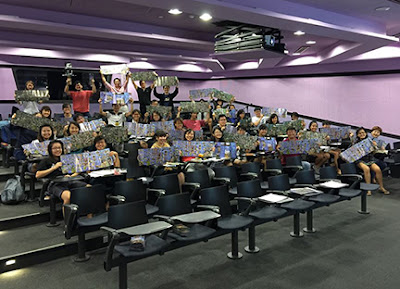 Heng Pei Yan will share 2,000 copies with everyone in her school, Katong Convent. Wow, thank you! She has been a staunch supporter of past prints as well. Among her many life pursuits, Pei Yan is also a nature guide, and is the Drone Commander on our intertidal trips. Check out her blog for more seashore stories. 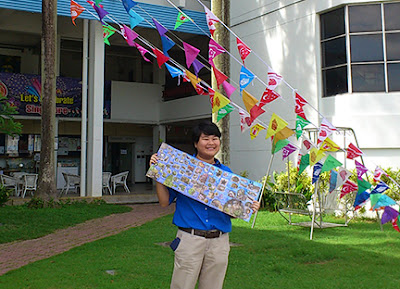 Tsu Soo Tan is a long time facebook friend and I finally got to meet him. I'm so glad that through him, the 500 guidesheets he ordered will reach divers everywhere. He is a well traveled diver and is active in two dive groups in Singapore. He is also doing some awesome work at Nanyang Polytechnic, from studies on wheelchair accessibility to sustainability issues. 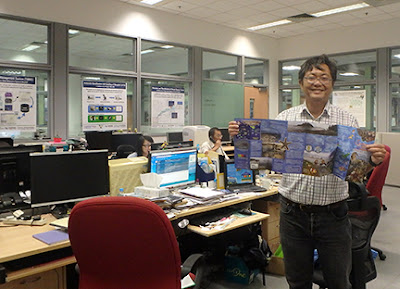 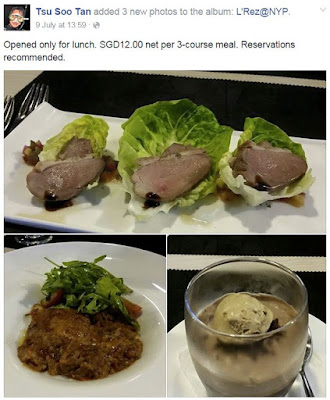 Meanwhile, guidesheets are already being given out at various events. Such as the screening of "Birth of a Marine Park" by Victor Tang on Discovery Channel. Mei Lin, who was featured in the film, shares more about her Giant clam work with a neat spread of guidesheets to give away. Some marine guides set up a mat with games and the guidesheets as prizes. We  had to weigh down the guidesheets with bananas to stop them from flying away in the breeze.

Finally got a chance to deliver to Lisa Lim the 1,000 copies she ordered. The very next day she shared them with the visitors who came on the Sisters' Islands Marine Park public walk where she volunteers as a guide. She also shared them with Richard Kuah who brought visitors to Punggol as a volunteer guide. Thank you!
I spent an awesome afternoon with Brian McAdoo, Prof of Science at Yale-NUS College who kindly bought 500 copies. As I delivered them, he was with guests who wanted to visit the Lee Kong Chian Natural History Museum. I jumped at the chance to bring them there. This is the first time I've been to the museum since the launch in Apr 2015. Then Brian treated me to a lovely lunch. Brian is an expert on tsunamis and studied the Aceh tsunami. We talked about sharing Singapore's shores with his students. I had so much fun, I totally forgot to take a photo! So instead, below, a photo of the lovely new Yale-NUS campus which just opened. Thanks also to Sarah Weiss who bought 100 copies to give out to visitors at Yale-NUS. Thank you Brian and Sarah for sharing Singapore's shore with Yale-NUS students and visitors!
Thanks to Tim Tan of Eco Adventures for supporting with 100 copies to be given out to the many people who join his wonderful nature trips. "Awareness before Change" he wisely told me. 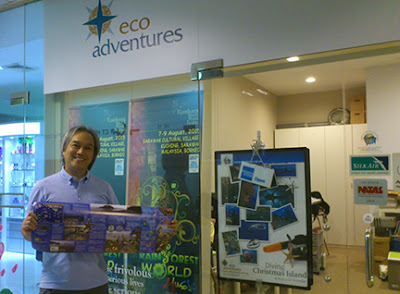 I'm in awe of nature lovers like Tim, who make a business out of their passion and offer ways for people to experience nature. Tim organises trips to all kinds of exotic places like Christmas Island and East Timor, and yet shares about Singapore's own wild places. Thank you Tim! 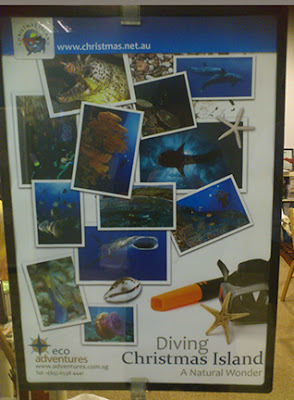 It will be many months later before I make the final guidesheets deliveries to some kind supporters who are now overseas. Chim Chee Kong who ordered 200 copies, and Robin and Wei Ling who donated 1,000 copies. Thank you everyone for the awesome support to not only make the print possible but also to give the guidesheets out far and wide.

More about the guidesheets here.
Posted by Ria Tan at 8:02 PM