Fun at Chek Jawa with families

Spent a glorious Saturday morning with enthusiastic visitors to Chek Jawa on the Naked Hermit Crabs' free monthly guided tour of the boardwalk. 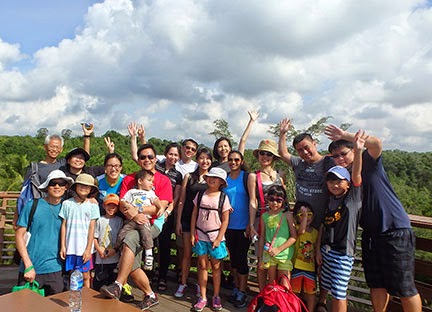 As usual, the kids spot the most amazing animals!


Before we began our walk, a rhinoceros beetle dropped by to say hello. We learn to be gentle with it. 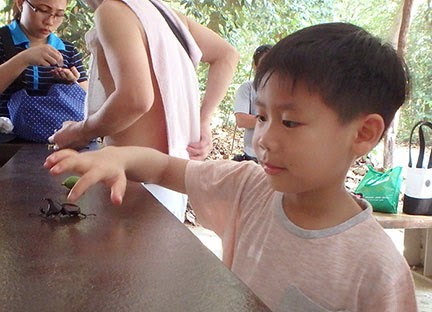 For the first time ever, when I asked what I could show the visitors on our way, one of them produced a list! Wow. Unfortunately, they were mostly of garden plants and not the wild plants that we commonly see at Chek Jawa. 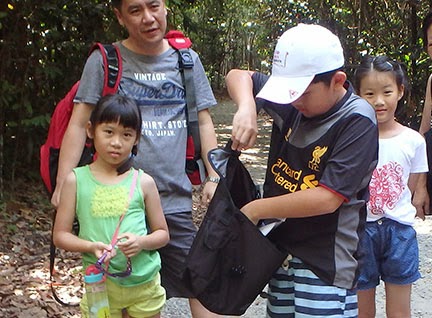 The kids are great at reading the map! 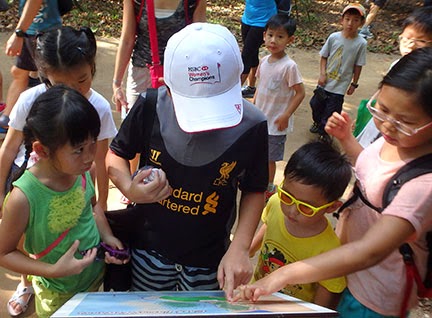 The view from Jelutong Tower is breath-taking on this gorgeous day. The tide is low so we can see the vast extent of the Chek Jawa intertidal flats. In the distance, the mountains of Johor, and in between Pulau Tekong, Singapore's largest natural off-shore island. 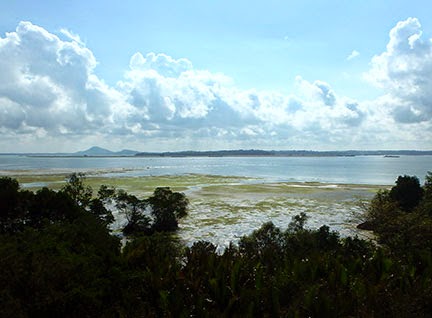 'A Dragon!' Leroy spots from the Tower. Yes, indeed this piece of wood on the intertidal flats does look like a dragon! 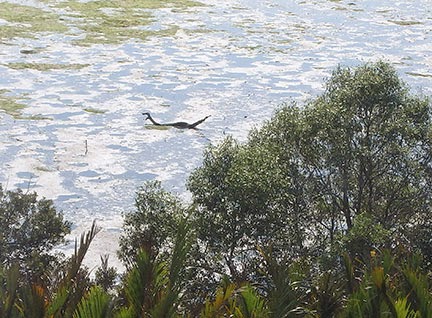 There were lots of crabs, spiders. Also dragonflies, birds. 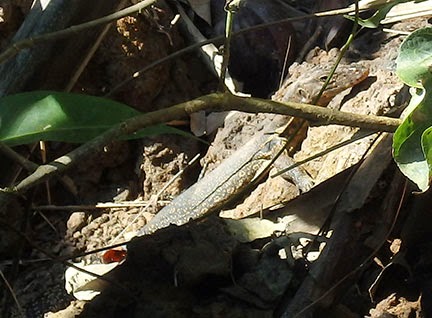 We also saw the Giant mudskipper, and many other kinds of mudskippers too. 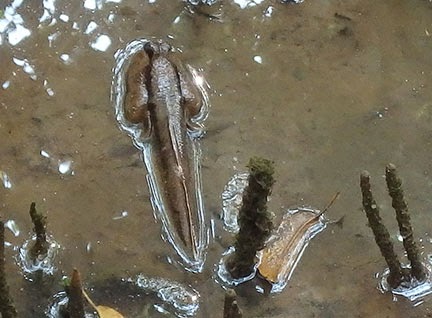 A super teeny tiny spider on a mangrove leaf! Only the kids can find such special creatures. 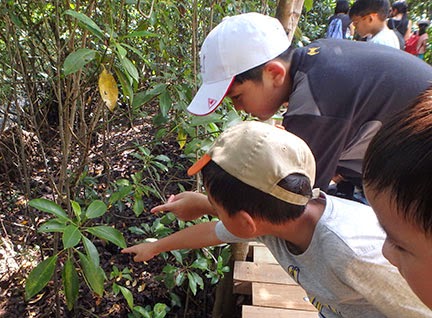 Oh, fluffy seeds with a parachute. It came from a seedpod of a Mangrove wax plant! 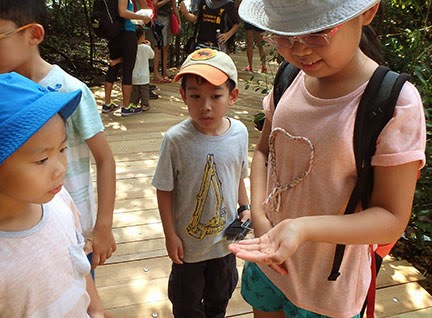 Min Lin encourages the kids when they spot cool stuff. 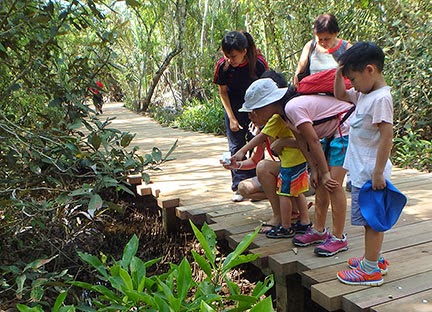 There were lots of fiddler crabs as we approach the sea. The kids take a photo of the Dragon Stick which we saw from the Tower! 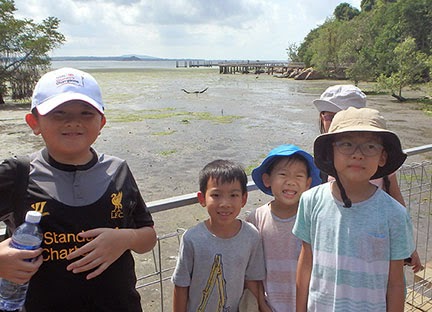 The seagrass meadows were lush and green. We could even see a happy green carpet anemone from the boardwalk. 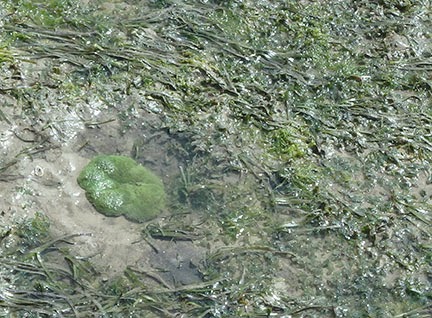 The tide was incoming and a stingray was spotted! 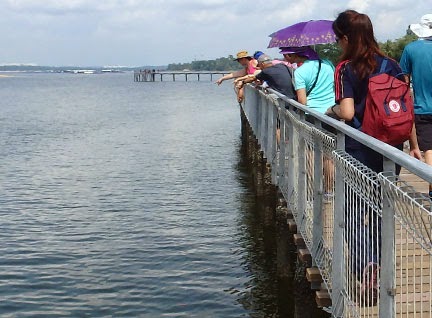 It's easy to spot cool stuff from the boardwalk as the tide comes in, like these Needlefishes. 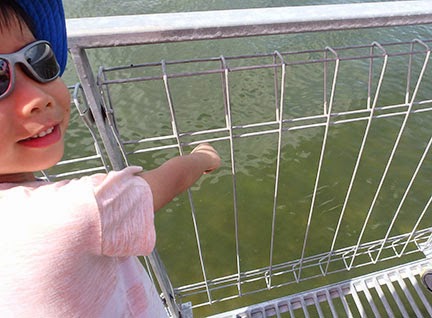 A closer look at the Needlefishes. 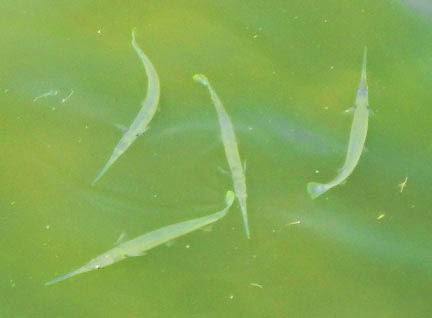 Sumita is pointing out cool fishes to the kids. 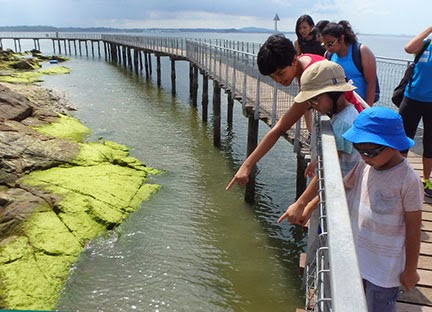 Hurray, the Durian is blooming. In 100 days, we should have a new crop of durians. The best durians come from Pulau Ubin! 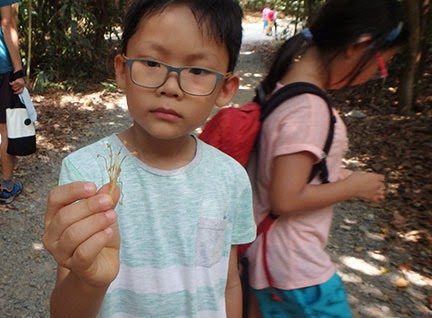 As usual, we end off with a nice round of drawing at House No. 1, the Chek Jawa Visitor Centre. 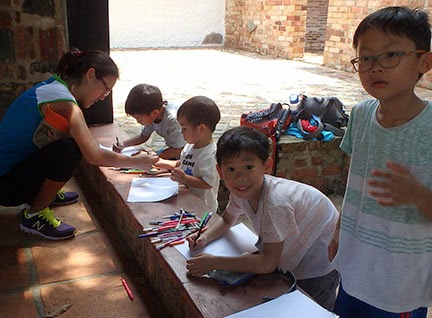 Thanks to the kids and the young-at-heart for sharing such lovely memories of our day at Chek Jawa. 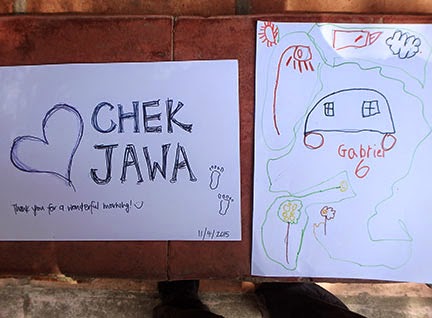 As we were going home, Mama wild boar came by with her 12 new babies! They are still tiny and have their 'watermelon' stripes which make them really hard to spot among the fallen leaves! 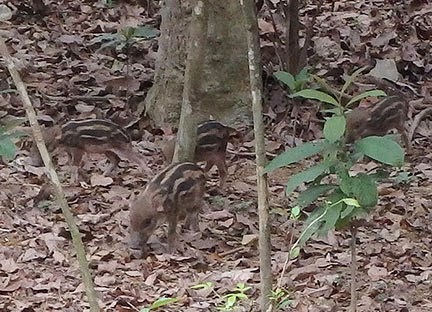 Come and join the Naked Hermit Crabs for the next free monthly guided tour. Or find out more about Pulau Ubin and explore it on your own.