Checking up on a rare mangrove tree at Pasir Ris

One of the world's rarest mangrove trees grows at Pasir Ris! The beautiful Bakau mata buaya (Bruguiera hainesii) which is listed as 'Critically Endangered' not just in Singapore but globally too! 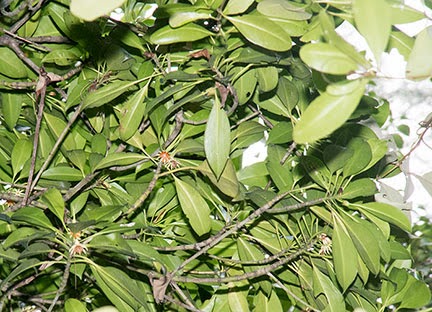 Yesterday, I visited the tree and I was glad to see it blooming profusely. It is now the last large Bakau mata buaya on the mainland. The one at Sungei Buloh is on the verge of death. Sadly, I also saw lots of seagrasses bleaching, and of course, lots of marine trash.


Alas, the tree (pink pointer) is surrounded by marine trash. 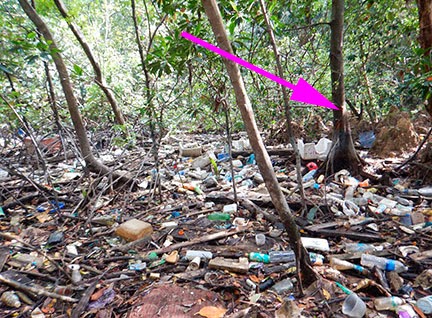 I only came across one propagule on the ground. It was hard to look for them in the litter laden shore. 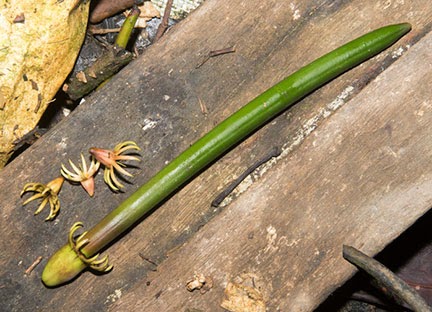 In the mangroves where the Bakau mata buaya is, there was an arrangement of blue drums that looks like it is being used to store stuff. There were also several kayaks in the area. 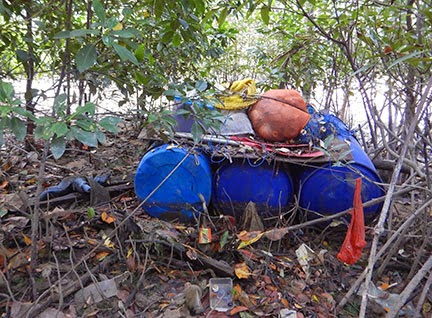 Large trash found near the mangrovey area included a fridge, furniture, drums. Styrofoam was plentiful, including this box that was floating at the low water mark. 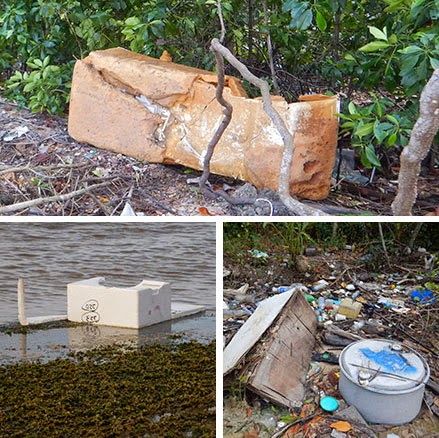 On the way to the tree, I noticed bicycles are still parked against the mangroves there. And there is lots of trash as usual. 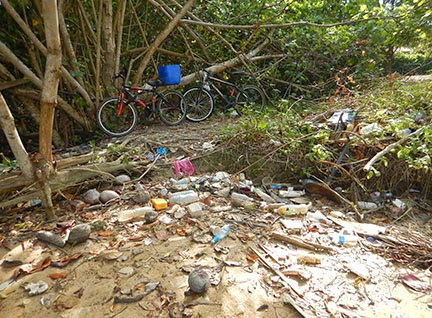 Wood and other large trash are piled up on where the last wild Pisang-pisang (Kandelia candel) used to be. The last time I saw the plant alive was in Jan 2011. 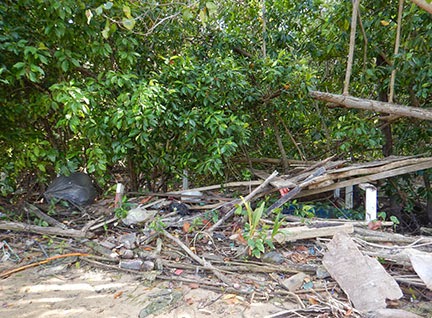 There is a large mound of sand in front of the old shoreline where the Pisang-pisang used to be. 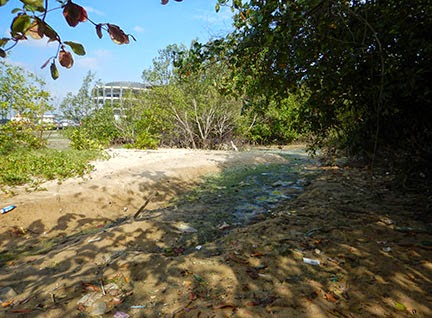 On the shore, I was alarmed to see almost all the Spoon seagrasses were bleaching. The trash is also depressing. A closer look at a clump of the bleaching seagrasses. All the green stuff in the photo is actually Sea lettuce seaweed (Ulva sp.). 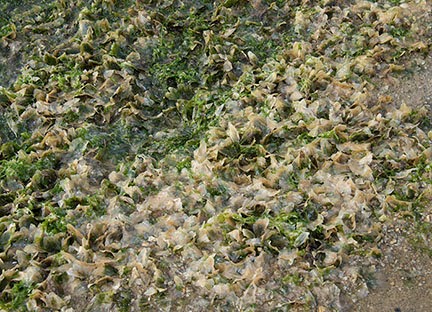 'Bleaching' happens when the seagrasses lose their chlorophyll, the green pigment that helps them undergo photosynthesis. More on the TeamSeagrass blog. The last time I saw this happen was when Chek Jawa was hit by a massive oil spill in 2010. 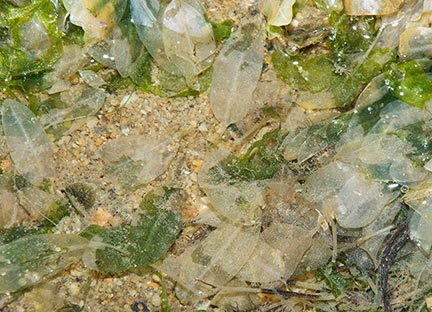 All along the beach, while there were some trash from beach users, other trash probably have industrial origins or come from the fish farms located in the area: parts of fan, containers of industrial fluids, large plastic bags that used to contain rice, sugar, detergent. More about where all this trash may come from. In 2010, there were extensive works at Pasir Ris as part of Restoration of Shoreline Along Pasir Ris Park.
Despite these shore works, there is still massive erosion on the shoreline today. 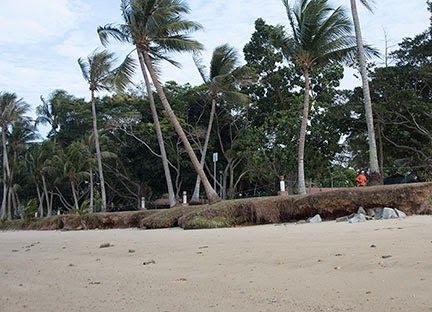 I saw a mangrove tree (left) growing just below the artificial shoreline. Is it time to consider incorporating natural elements such as mangroves to protect the shoreline? 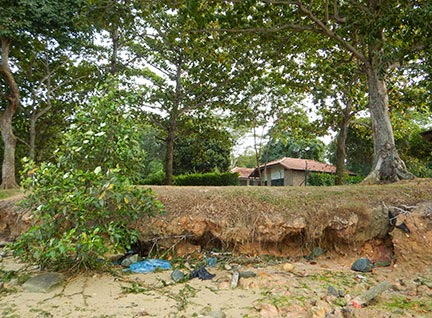 Pasir Ris is well enjoyed by people. There were many families camping out at the Park. 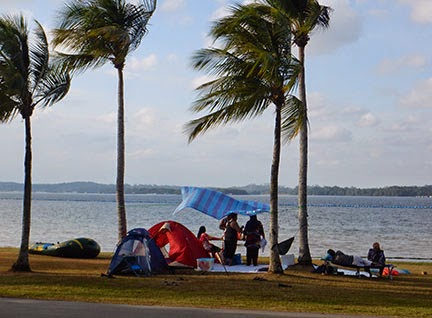 We do have to look out for falling coconuts while we're there! 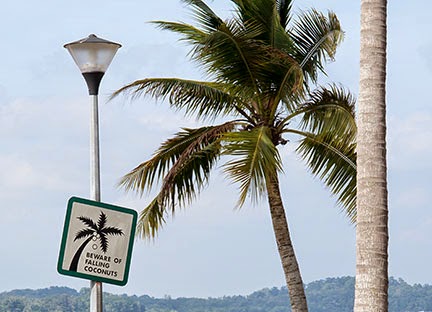 A fisherman carrying his rod and a cangkul (hoe) to dig for worms on the shore, and his wife. 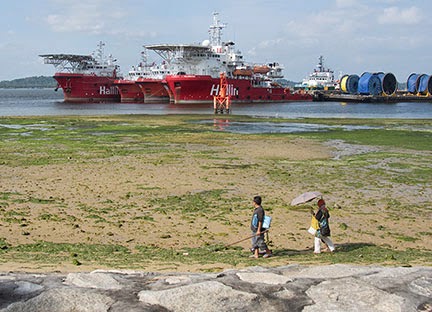 On a small boat, a pair of men were handling a fishing net just off the shore. 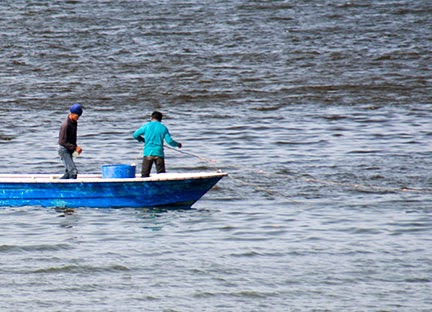 There are usually few marine life out and about in the hot daylight, so it's not surprising to see none on my trip. But I did come across the empty shell of a dead shell. It is Babylonia spirata first recorded in Singapore in 2013. More in this paper on the Lee Kong Chian Natural History Museum. 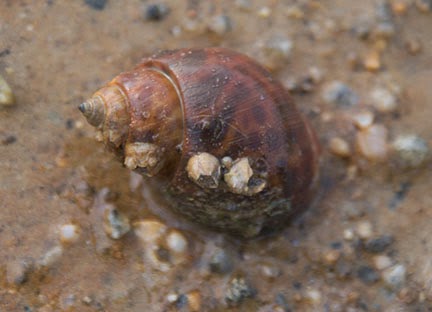 Our shores have precious and rare plants and animals. There are not enough low spring tides to check all of them as frequently as I would like to. I hope this Pasir Ris shore stays well until our next check.