The Sisters Islands Marine Park is the forever home of corals salvaged from the Semakau Landfill. Thanks to NEA for inviting me for this visit to mark the relocation. 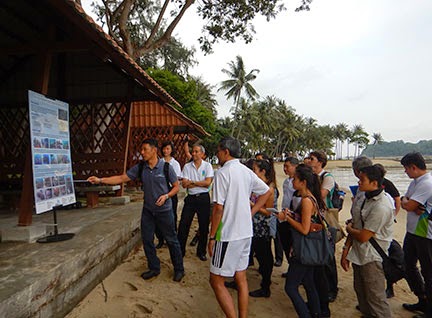 Here's Eugene Goh from DHI, which conducted the relocation, briefing Dr Vivian Balakrishnan, Minister for the Environment and Water Resources at Sisters Islands.


On the shore, the Minister was briefed on the corals relocated to Sisters Islands by Dr Karenne Tun, Deputy Director, Coastal & Marine, National Biodiveristy Centre at NParks.
Here's an assortment of hard corals rescued from Semakau Landfill, waiting to be placed on reefs at Sisters Islands. 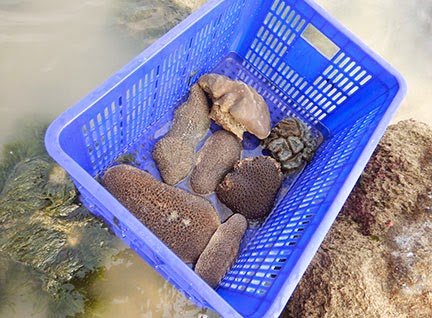 I couldn't make it on the rocks (foot still not so good), so I watched the action from a distance. 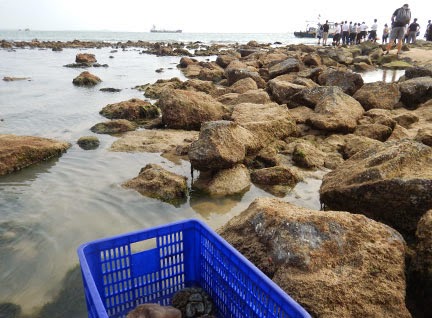 At the sea edge, the Minister hands over a Giant clam rescued from Semakau Landfill for divers to place on the reefs at Sisters Island.
Over the last few months, divers have worked hard to carefully remove corals found in the Semakau Landfill lagoon.
The rescued corals are eventually placed on their forever home, the reef at Sisters Islands.
Among the amazing finds in the Semakau Landfill lagoon was this Neptune’s Cup Sponge, which was once considered extinct until they were re-discovered in our waters in recent years.
After the ceremonies, I was glad to be able to share a little of Sisters Islands with the Minister. Here, he has found Common sea stars and arranged them into our Singapore flag formation. 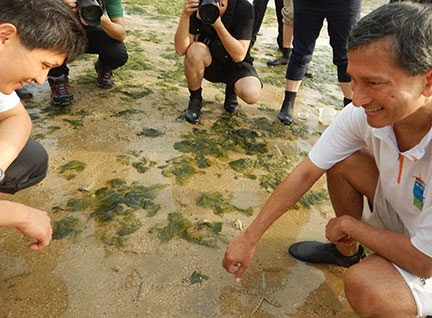 He takes a photo of the arrangement. Here's more of Minister's photos of his trip on facebook. 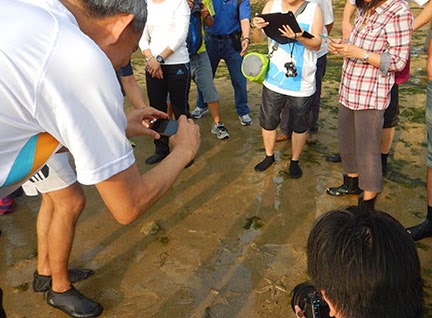 Although we couldn't find an animal to form the cresent moon, we did find a humungous Moon snail. 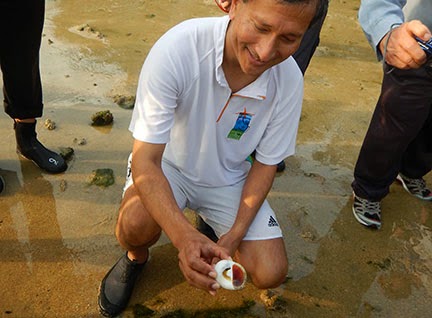 Oh dear, one of the photographers is pinched by a young flower crab. 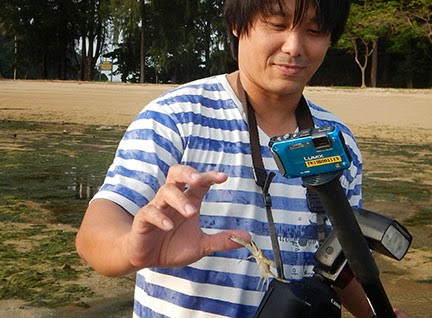 The Minister helps release the crab. Once we put the crab in water, it will let go. 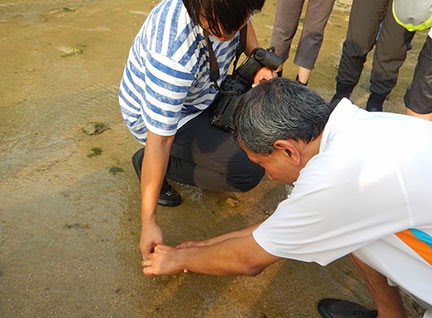 Fortunately, there was also a public walk at Sisters Islands at the same time. So we took advantage of the seekers who found fabulous creatures including this seahorse! They also found a spider conch. 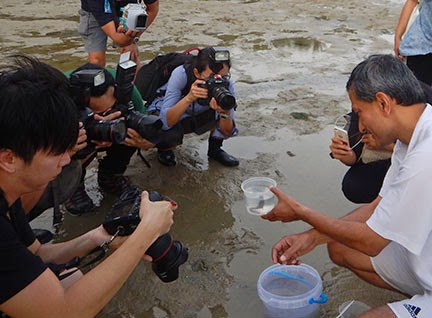 Thanks to other nature people attending the event, we also managed to show him other common marine life such as carpet anemones, a leaf slug, synaptic sea cucumber, phyllid nudibranch, land hermit crabs, hairy crab, marine spider and more!

Where exactly did these corals come from in Semakau Landfill?

The existing Phase 1 Landfill area is almost all filled up, so NEA is closing up the gap in the seawall on the Semakau Landfill, forming one big pool. Ash will then be dumped into this big pool. 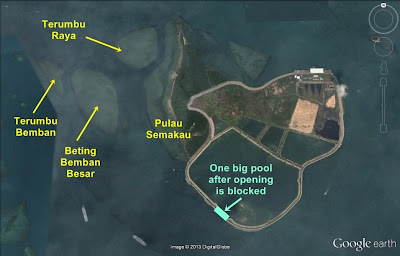 The Semakau Landfill was created by building a seawall around existing submerged reefs including Terumbu Jarat (which was buried in the Phase 1 of the Landfill operations) and Terumbu Pemalang Besar. What is being relocated in this exercise are the corals and marine life found in these existing natural submerged reefs that were enclosed by the seawall. With the closure of the gap in the seawall and dumping of ash into the big lagoon, these marine life would have been killed.


What does this event mean for our shores?

Our trash habits have a direct impact on our marine life. What happens after the big lagoon is filled up? We need to work on zero waste so that the Semakau Landfill can last as long as possible. Because if we need to further expand the Semakau Landfill, more of our wild reefs may be affected. You can make a difference! Reduce (this should be our first effort), Reuse and Recycle (this should be our last resort).

I was asked to say something for the NEA press release on the event. Here are my full quotes:

"Although I am sad that the natural patch reefs have to make way for our waste disposal needs, I am glad that much care and effort has been made to salvage the marine life that flourished there. It is fitting that these will have their forever home at the Sisters' Islands Marine Park, Singapore's first marine park.

The Semakau Landfill is a great example of how Singapore is ahead of the curve in dealing with resource constraints. I am proud that with the Semakau Landfill, Singapore can show that it is possible to develop sustainably despite limited land, without destroying all of our marine heritage.

I am also proud of the Pulau Semakau public intertidal walks, which allow ordinary people to see rich marine biodiversity next to a well-managed Landfill. The walks helps pass a powerful message: if we each do our part to work towards zero waste, we can avoid expanding the Semakau Landfill and thus preserve the amazing marine life that thrive in the submerged reefs and waters around the Semakau Landfill."


Other posts by those on this trip

Media articles about marine life rescue due to the Landfill expansion