This morning I saw many freshly dead fishes washed up at Lim Chu Kang jetty. The dead fishes look like those raised by fish farms. 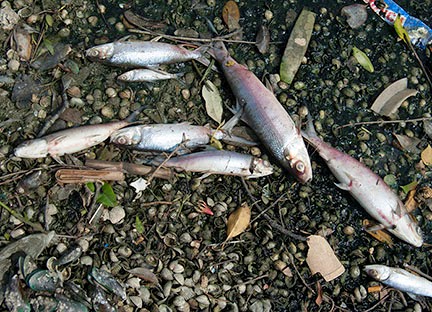 What killed these fishes? Were these dead fishes deliberately dumped by the fish farms instead of being properly disposed?

There are about 60 floating fish farms near Lim Chu Kang and Sungei Buloh. These are all licenced by AVA who ostensibly regulate farming practices. The yellow line along the Johor Strait is the international boundary between Singapore and Malaysia. 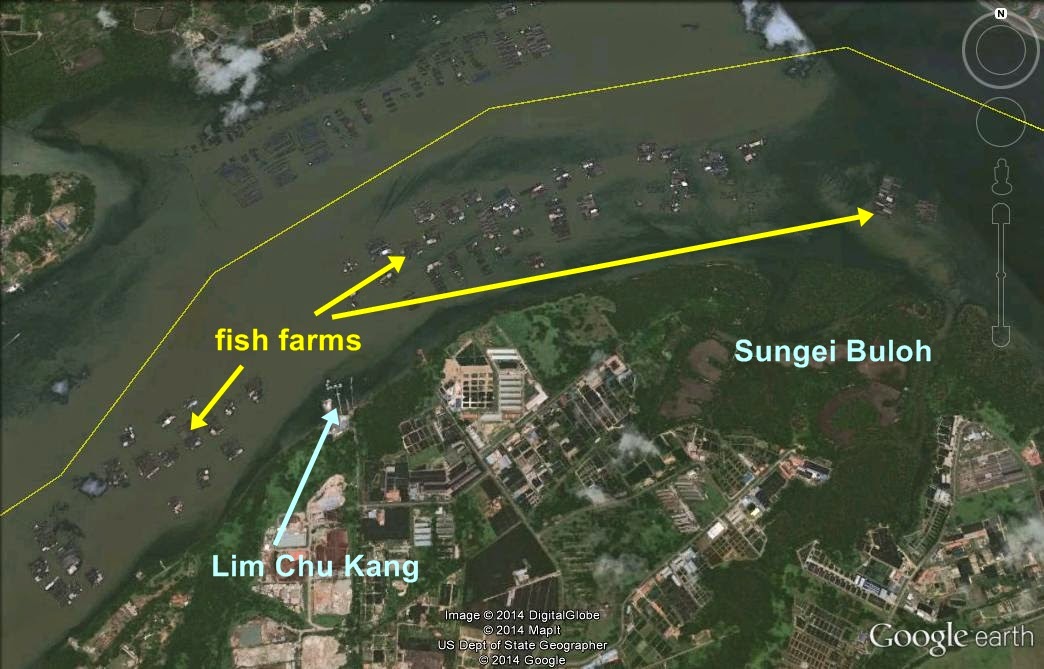 I walked about 20m along the mid-water mark east of the jetty. 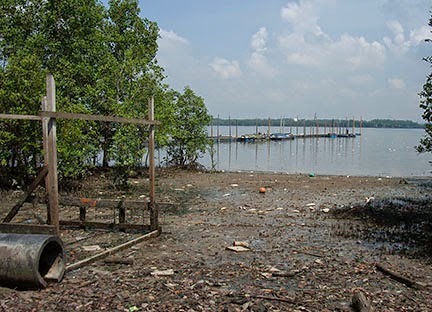 All along the shore, there is a line of dead fishes at today's low water mark. With more fishes floating in the water. 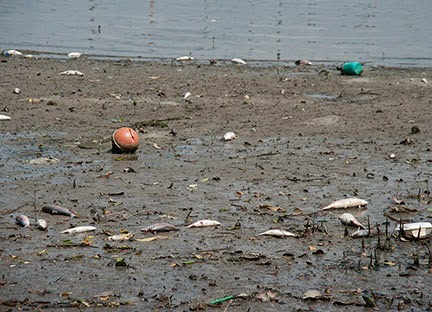 A lot more dead fishes are floating in the water between the shore and the fish farms. 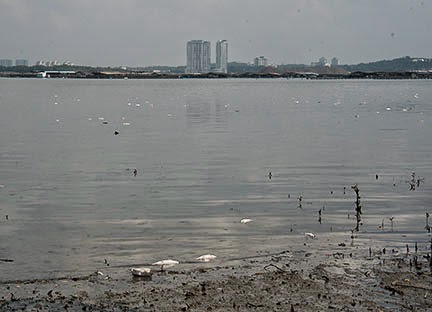 There is a line of dead fishes at the most recent mid-tide mark. 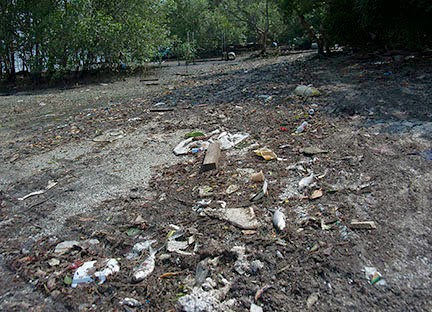 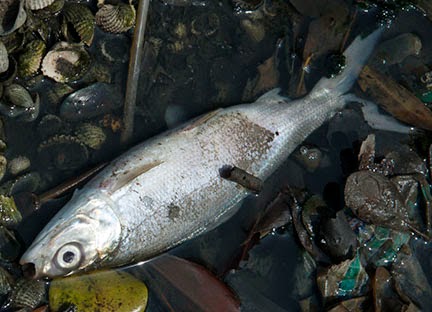 At the high water mark, the dead fishes here are starting to decompose. Have dead fishes been washing up for a while? Smaller quantities in the days before? 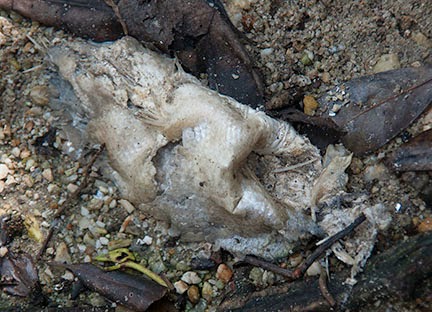 This fish was crawling with live maggots. 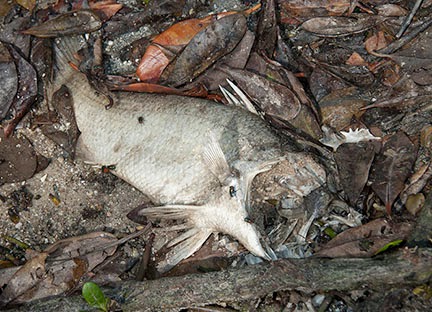 Quite creepy! I didn't see any dead wild fishes. 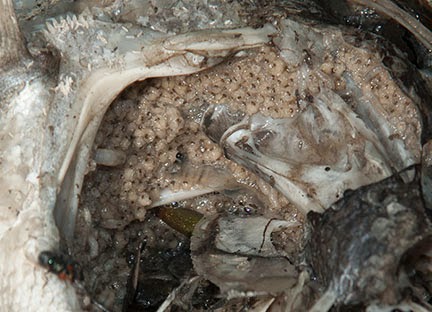 Although there this is notice that "Trespassers will be Arrested" there are very obvious signs of regular use in the mangroves. 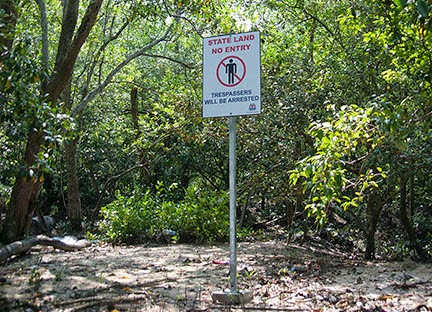 On the high shore, piles of what appears to be stores or other stuff. 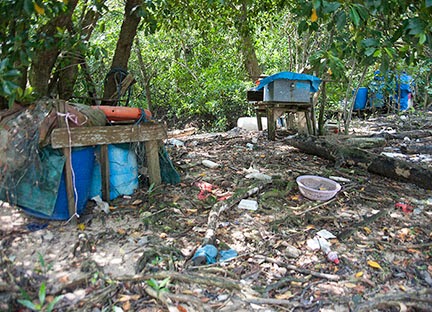 There's even this cosy-looking table and bench in the mangroves! 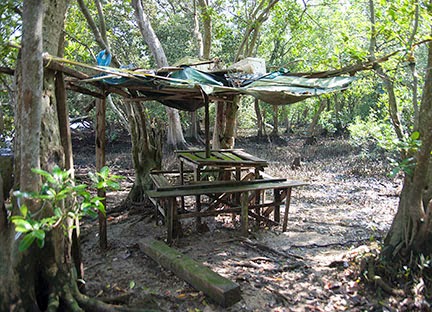 Several small boats are 'parked' among the mangrove trees. Blue drums, large styrofoam boxes are scattered here and there. 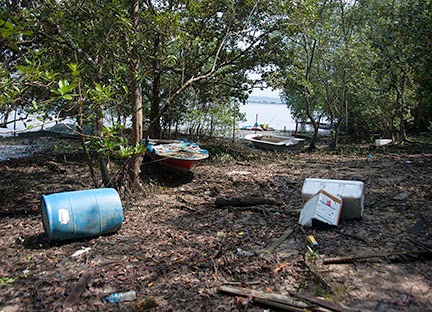 At the low water mark, all kinds of stuff seem to be 'stored' on floating platforms. 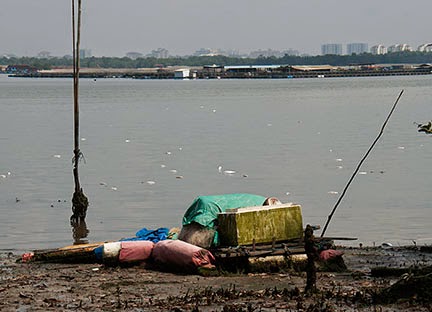 Including this large pile of fishing nets. 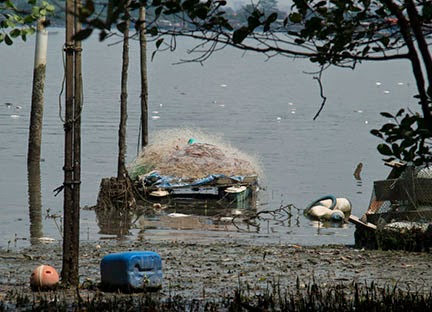 There's even an abandoned section of pontoon 'parked' on the mangrove trees. 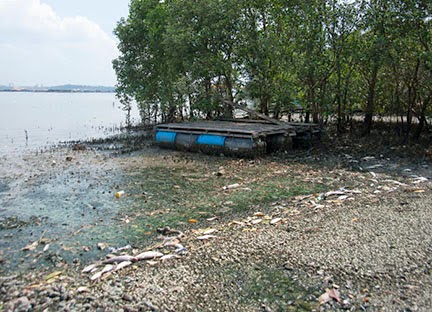 On the high shore, there is a great deal of trash. 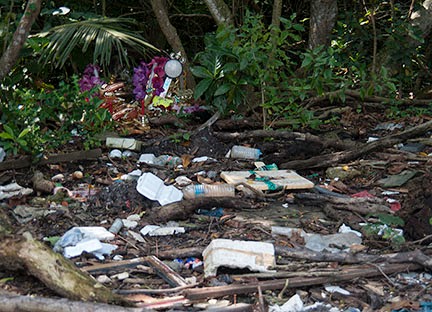 There jetty was busy with lots of people hauling goods and coming and going in small boats. No one seemed bothered by the dead fishes all around them. 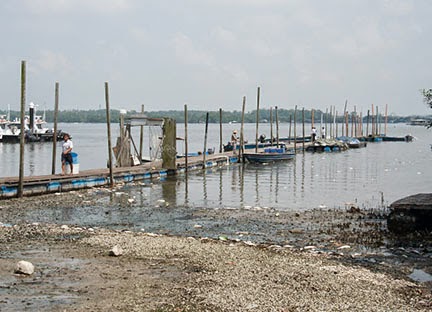 There was also a pile of living Green mussels that were dumped near the jetty. Why were they dumped? Diseased? 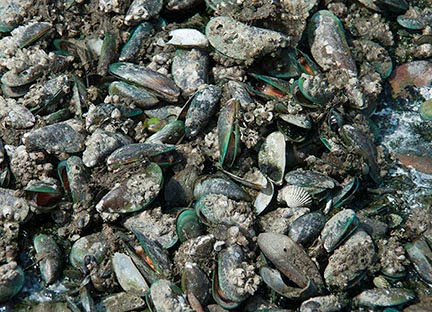 I notice the dead fishes were all on the east side of the jetty. 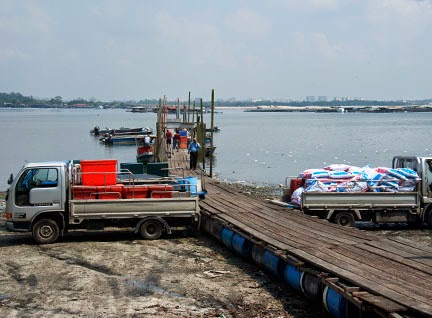 A closer look at the fishes floating east of the jetty. 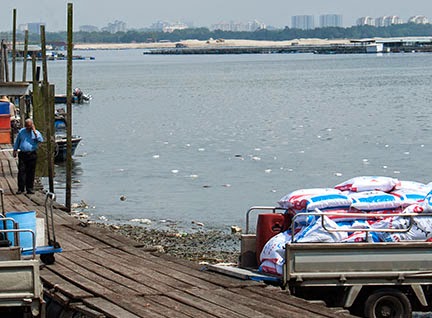 I couldn't see any floating fishes on the west of the jetty. 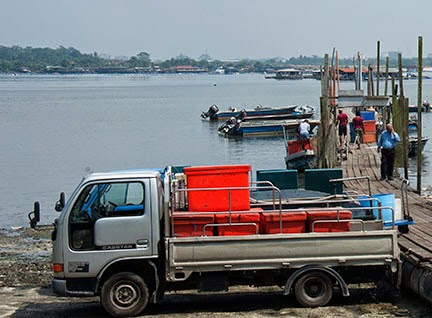 A large tank and a smaller bin is provided at the jetty for use by the coastal fish farms who have to bring their trash back to the mainland. They are not provided daily door-to-door trash collection. The tank is somewhat full. I did not get a strong smell of dead fishes near the tank, which would have been the case if dead fishes were dumped in the tank. 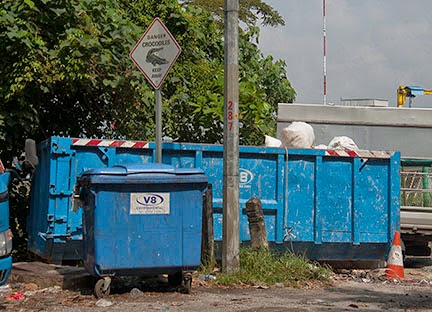 What I saw today reminds me of the dead fishes that washed up at Lim Chu Kang in Jul 2013 following mass fish deaths at our fish farms in the area. AVA confirmed 90 tonnes of fish died in farms off Lim Chu Kang at that time.

Channel NewsAsia reported today that: "Fish farmers at Lim Chu Kang received an alert from AVA last Friday (Oct 10), notifying them of impending low dissolved oxygen levels in the waters around the farms. AVA said the low dissolved oxygen levels at Lim Chu Kang could have been caused by several factors, including the relatively dry warm weather and tidal conditions. It has also received reports about the fish mortality in some farms in Lim Chu Kang, and these farms have turned on their aeration systems to mitigate the low dissolved oxygen level situation. The affected farms have also conducted an emergency harvest of the fish to reduce their losses. AVA said it has also deployed oxygen cylinders and aerators to supplement the farms' aeration systems."

No mention of AVA helping the farms dispose of their dead fish responsibly.

Have dead fishes also washed up at Sungei Buloh too? 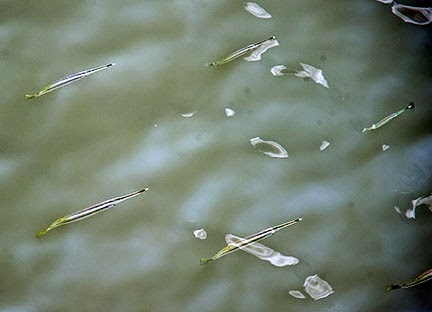 I walked to Platform 1 and didn't see any dead fishes along the way or in the water off Platform 1. 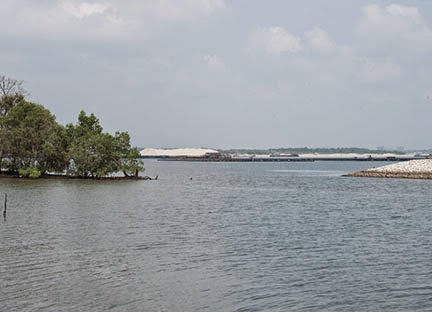 I walked to Platform 2 and no dead fishes either. I did see a small group of Archerfishes here. 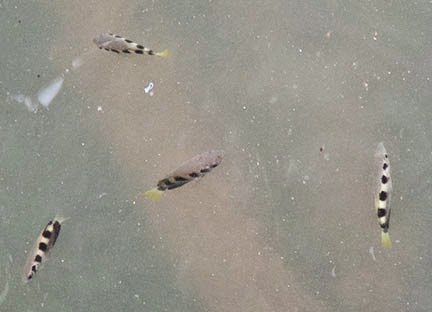 In the pond near the Main Bridge, I saw a school of wild mullets. All the wild fishes I saw seemed alright. 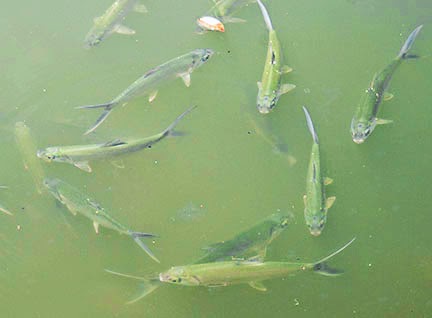 I noticed two bright yellow bins at the Main Bridge which are not usually there. 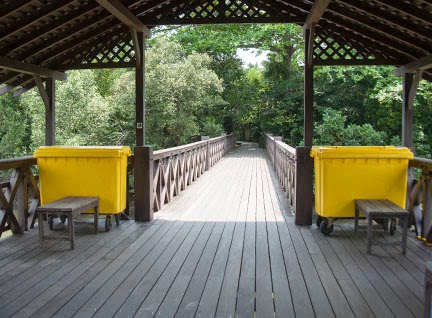 The bins contain booms. Probably to stop the dead fishes from floating up the river, if and when they arrive at the Reserve? It is heartbreaking to see that NParks has to work extra hard to protect our Reserves simply because fish farms do not dispose of dead fishes responsibly. 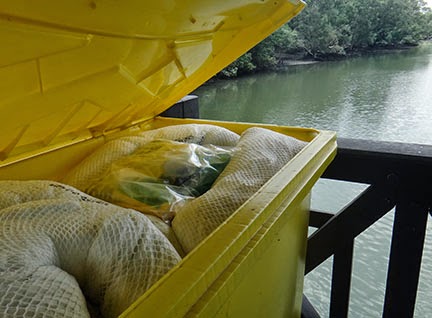 Wouldn't it be better for the environment, and save manpower and cleanup costs, if our coastal fish farms were provided a way to responsibly dispose of their trash?

Once again, I would like to highlight that the authorities should work together to provide all fish farmers a practical and reasonable way to accommodate their trash needs. Today, every business and household on the mainland and every ship parked in port is provided with daily door-to-door trash collection. But all coastal fish farms licenced by AVA are NOT provided with a similar service.

Posts about sightings of dead fishes washed ashore in 2014

Fish farm trash on our shores