Thanks to NParks for inviting me to be a part of a special visit to Singapore's first marine park with MOS Desmond Lee and the media. 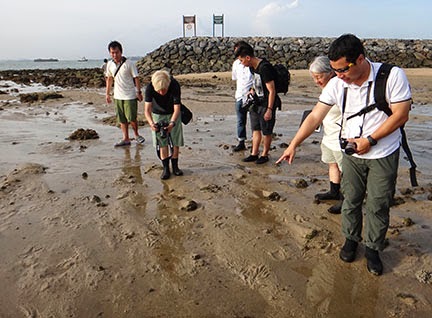 How nice to be greeted by sea stars, on a cool cloudy but sunny day. Perfect for exploring the amazing marine life found at Sisters Island. With good news for those who want to come for public walks at Sisters Islands!

I'm not sure if it was a good idea to make me be the one to give the safety briefing. "If you can't find the stonefish on the pamphlet," I said, "you can't go down to the seashore!" Everyone had fun attempting to find it and realised it is hard to spot it even on a piece of paper. We discussed some important ways to avoid being hurt and to avoid hurting our shores. 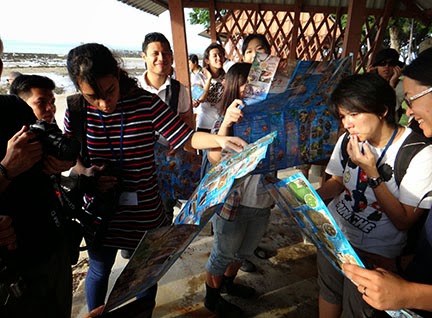 Then we were off to explore Sisters Island! Dr Karenne Tun found a moon snail, we examined some weird acorn worms, and other critters that live in the sand. 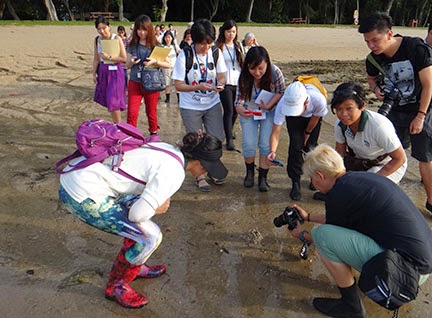 Dr Lena Chan takes photos of the visitors looking at some intertidal corals which included some Mushroom corals. While Leong Kwok Peng of the Nature Society shares with MOS Desmond and the rest of the visitors his unpleasant experience getting stung by a Diadema sea urchin, an example of which was found by the 'seekers' who came beforehand to find interesting specimens. Nearby, we also saw a Long black sea cucumber. 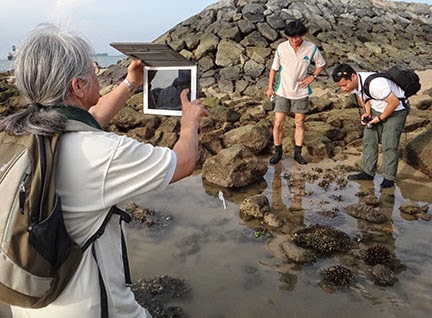 Kok Kwan Siong pointed out a Giant carpet anemone with some 'Nemo's (aka False clown anemonefishes) but they were too shy to come out. 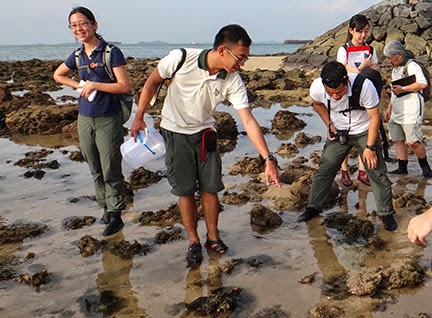 Collin Tong urges the visitors to find the well camouflaged Tiger-tail seahorse. And soon enough, everyone managed to find it! These NParks officers worked very hard to make the Marine Park a reality, and continue to work on the upcoming public walks and other activities to share this Park. 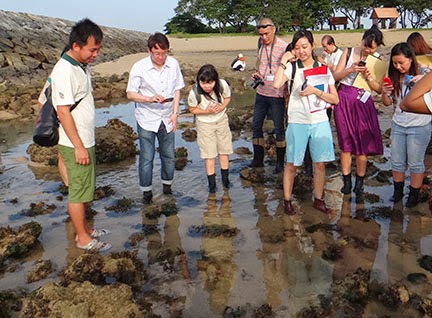 A lovely large green Haddon's carpet anemone! This one has a mama and papa anemone shrimp. 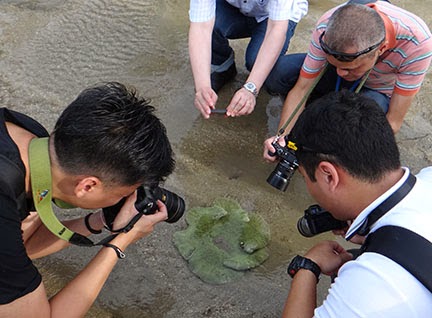 The crabs on the shore can be quite ferocious. This Flower crab was menacingly waving its scissor-like claws even though it's so much smaller than us. It's best not to excite or alarm these animals, so we left it alone after taking some quick photos. 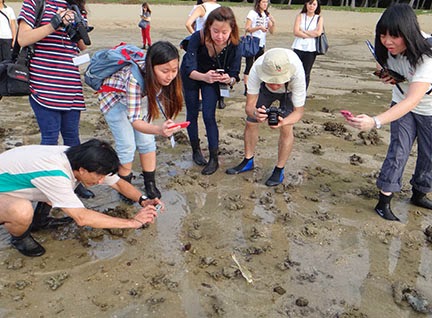 Among the highlights is a Fluted giant clam that the NParks team found during their recces. We totally missed this on our own surveys! Are these clams popping out from somewhere? So much more to learn and discover. 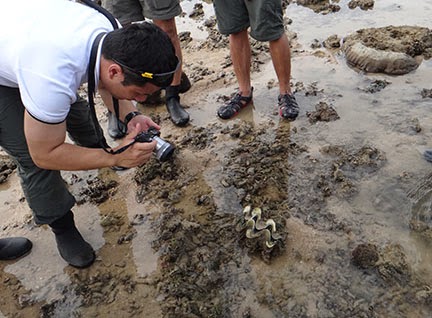 The media interviewed MOS Desmond intensively, ignoring the tide as it turned and covered all the corals in murky water. Behind on the horizon, a huge container ship passes. Despite the massive shipping, industries and less than clear water, Singapore still has amazing reefs and marine life! 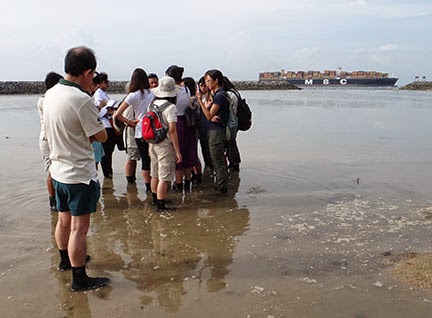 Later, when we got back to the boat, there was a little ceremony with MOS Desmond handing a Giant clam to Dr Neo Mei Lin for 'planting' underwater at Sisters Island. The Marine Park will not only be a place for ordinary people to visit during low tide, but will also be a site for restoration and scientific work on our marine life. The Giant clam effort as well as coral reef relocation are some of the ongoing efforts.
Here's a video clip on Today online which shows the Giant clam 'handing over' to Mei Lin and lots more.

On the way home, we had a look at some of the other shores that are included in the Marine Park, i.e., the western subtidal shores of Pulau Tekukor and St. John's Island as indicated on this diagram.
St. John's western shores include some of our rarest trees such as Nyireh laut. Poor tiny swimming camera couldn't take good photos of this, so here is one I took on my trip to this shore in Jul 2009. 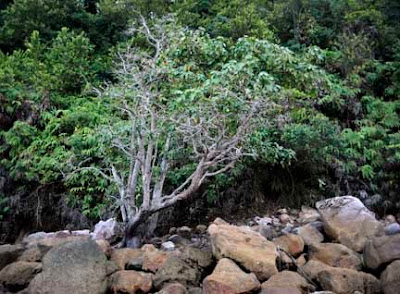 Want to come for public walks at Sisters Island? MORE dates are available! From the NParks website (also the link for online registration when registration opens).

I will be guiding on many of these dates, so hopefully, I would see you then?