Near death at Cyrene!

It's 4am and we arrive on Cyrene Reef for a predawn survey to check up on the seagrasses and corals on this submerged reef that lies in the middle of the industrial triangle.
The trip was cool and uneventful until the weather turned very bad just as we were about to leave.


I didn't manage to cover much ground as I still struggle to walk well on the sea shores. My last trip to this, one of my favourite shores is nearly a year ago in Aug 2013. Some seagrasses were coated with a kind of brown fluffy growth. 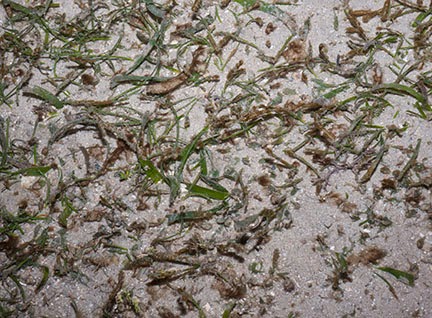 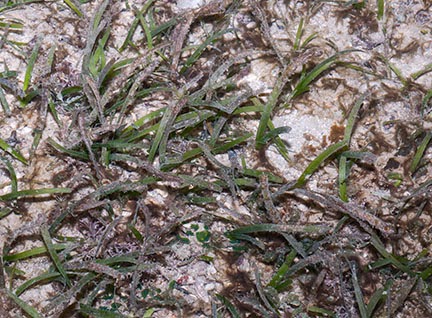 The sandy shores are alive with animals seldom seen on our other shores. We were lucky to spot this Grey bonnet snail in the midst of slowly eating a Cake sand dollar! I also the  large Olive snail which so far, I've only seen on Cyrene. As well as many Pink moon snails. 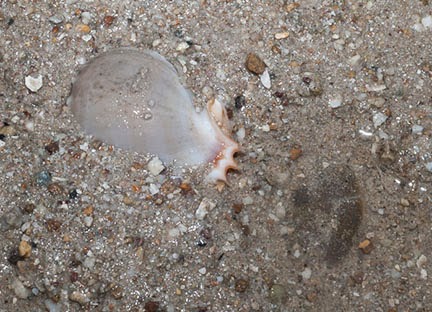 As usual, we are concerned about coral bleaching on our shores and I check out a small area of corals near the northern tip of the Reef. Most of the large coral colonies I saw were not bleaching. Some had a small patch bleaching, only one small colony of plate coral was bleaching badly. 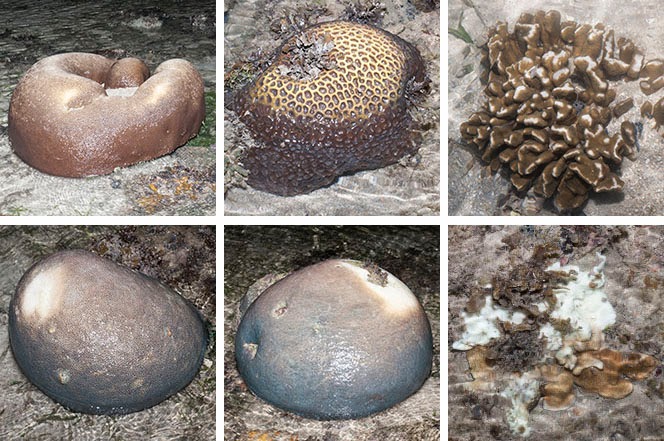 All the Asparagus flowery soft corals I saw were a healthy purple, and most of the leathery soft corals were alright. I only saw a few that had bleaching patches. When we got back at Marina at Keppel Bay, we noted that all the usual marine life are still growing on the pontoons. Most of the hard corals seem fine. The soft corals are still plentiful although some are a little pale, none were out and out bleaching. 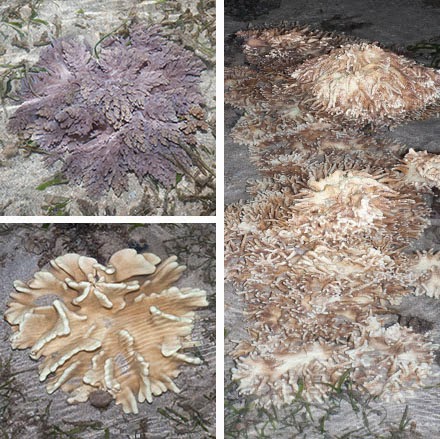 The large Knobbly sea stars remain plentiful. I saw many gathered near our landing point. I also saw one small one. 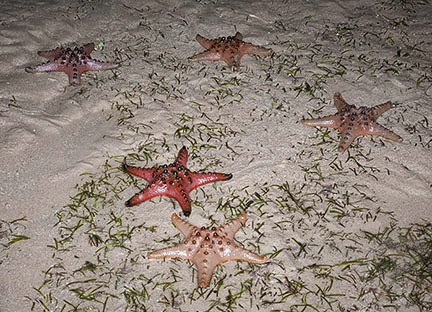 Jianlin spotted this, which looks to me like a rotting Knobbly sea star. Oh dear. 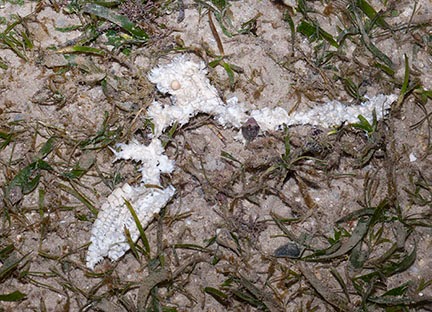 There were also a lot of Common sea stars. I believe Cyrene Reef probably has the largest number of these sea stars of all our shores. 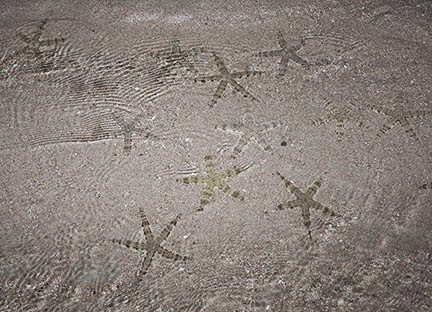 I also came across one Common sea star which had lost all of one arm and most of the other four arms. 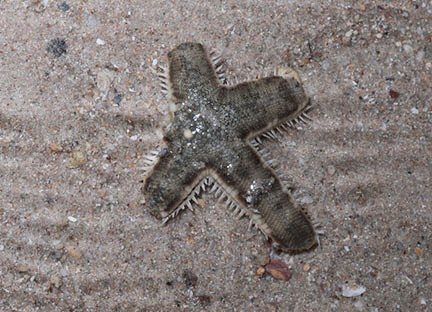 The only slugs I saw was this small Spotted sea hare. 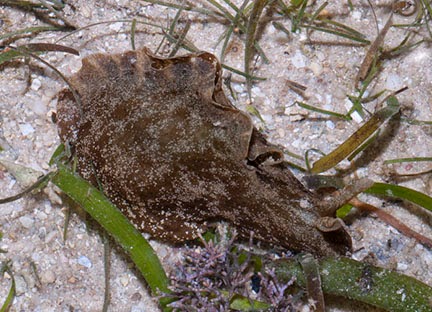 And a Melibe nudibranch but which has dropped off most of its lobes. 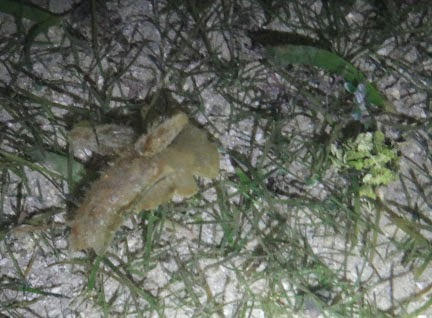 Sadly, Juria spotted this abandoned net.
Just as we were waiting for sunrise and to fly the Drone, a strong wind picked up from the West. Uh oh, it's the dreaded Sumatras, also called in 'Barat Barat' which means in Malay, 'the Western Wind'. Fortunately, the team was already gathered nearby, we hurriedly put on our life vests and headed out into a surging sea to attempt to leave by dinghy.
Oh no! The high waves made departure very difficult. Meanwhile, lightning started flashing all around us! And the tide was rapidly rising. I really thought we were going to die!
Fortunately, by some miracle, the Sumatras made a U-turn around Cyrene! The winds and waves died down. Kok Sheng redirected the dinghy to a less rocky spot, with Chay Hoon using the paddle to hold it away from the shore as the first team clambered on board. Eventually, everyone made it safely back to the big boat. Phew. Thanks to Alex and crew for making sure we don't drown! (Why is it we often have a near death experience on Cyrene? During our last trip there in Aug 2013, Russel found a living cone snail!) 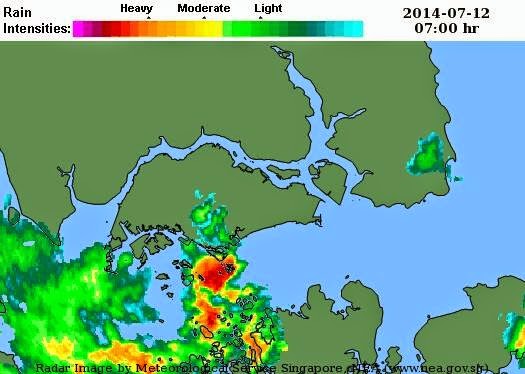 After the drenching in the dinghy, we all felt as slimy as slugs. A quick shower at a public pool, and we're ready for the Festival of Biodiversity at VivoCity. Where our collections of seagrasses and seaweeds were added to the display tanks there. This Festival is very special because Singapore's first Marine Park is being unveiled! Here is Dr Karenne Tun sharing more about this with the President. 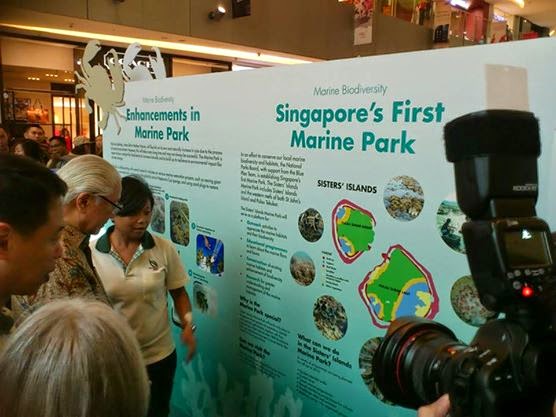 Heng Pei Yan aka the Drone Commander also shared with the President and MOS Desmond Lee about how she pilots the SG Sea Drone to take awesome aerial shots of our shores!
By the end of the VIP visit, Pei Yan, Chay Hoon and I were exhausted and finally limped home. After dealing with a mountain of washing up, it's nearly time to pack again for tomorrow's trip! In a few hours, we will be back out in the early morning to check out another submerged reef in Singapore. Let's hope we have better weather, cross fingers!

Posts by others on this trip
They saw a lot more and covere more ground than I did.