Did you know that different species of sea stars and sea cucumbers are able to reproduce in different ways when survival of their species is threatened? These marine animals protect their eggs and even self-divide when conventional reproduction is inadequate. 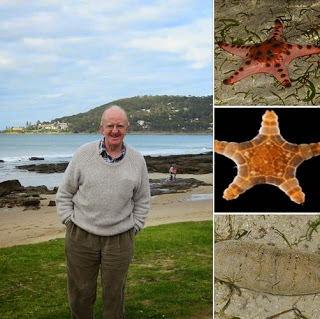 If you are curious about their reproduction strategies, join us for an evening with Dr Peter Mark O’Loughlin, a world authority on sea stars and sea cucumbers.

The talk is free but pre-registration is required at http://tinyurl.com/m25q6qr by 2 July.

Abstract: Echinoderms such as sea stars and sea cucumbers are marine invertebrates which (usually) have five-fold symmetry. Like most marine animals, they are typically dioecious (ie. it has distinct male and female individual organisms) and reproduce sexually.

When conventional sexual reproduction is inadequate for species survival, additional strategies develop. These include behaviours that increase the probability of fertilisation such as the aggregation of males and females when releasing gametes. They may even pseudo-copulate or protect fertilised eggs to increase survivorship. In some cases, morphological characteristics such as dedicated body marsupial pouches are developed to ensure that fertilised eggs are protected. On the other hand, some sea stars and sea cucumbers supplement sexual reproduction with asexual reproduction.

Over some decades, Dr O’Loughlin has searched for micro-species of sea stars and sea cucumbers in the rocky shallows of the coast of southern Australia. Today, he is a world authority on Asteroidea and Holothuroidea, having described a total of 128 new species and erected 18 new genera of these echinoderms. As an Honorary Research Associate with Museum Victoria since 1980, his work focuses on the systematics and reproductive biology of echinoderms. Dr O’Loughlin is currently collaborating with University of Florida to conduct molecular phylogenetic analysis of echinoderms. He also engages in extensive collaboration with marine researchers in Asia and the Middle East.

The Wallace Lecture Series was a series of important lectures delivered in the 1960s by well-known biologists in the then University of Malaya. These lectures stimulated discussions and encouraged exploration of new ideas in systematics, ecology and natural heritage.

It seemed especially appropriate and timely that this lecture series, named after one of the two discoverers of modern theory of evolution, should be “resurrected” to further research interest and activities in Singapore’s rich biodiversity.

This is the sixth Wallace Lecture Series delivered by a Shell Visiting Research Scientist, brought in by the Lee Kong Chian Natural History Museum (National University of Singapore), in collaboration with National Biodiversity Centre (National Parks Board); and supported by Shell Singapore.


The talk is free but pre-registration is required at http://tinyurl.com/m25q6qr by 2 July.