Piglets overdose at Chek Jawa with the Naked Hermit Crabs 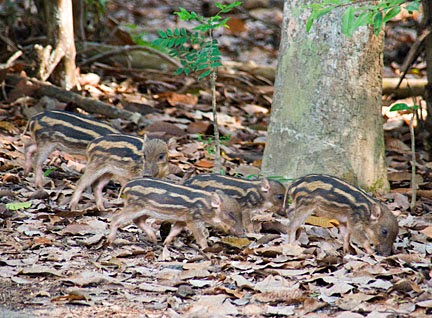 I was glad to be able to join the first Naked Hermit Crab walk for 2014! It was my first 'overseas trip' in six months since I broke my foot.


Chek Jawa is a beautiful coastal area on Pulau Ubin, an island just 15 minutes away from the mainland by bumboat. One of the tricky portions for The Foot is getting on the boat at Changi Jetty. This happened quite safely and easily with help from the Crabs. 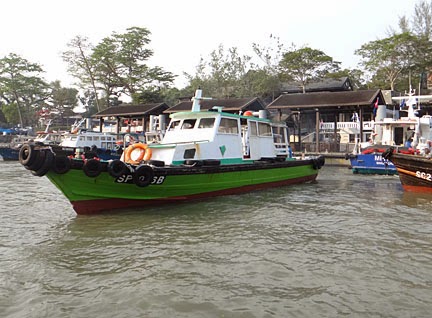 The other tricky bit is getting off the boat at Ubin Jetty. The tide was very low, revealing the full length of the scary, barnacle encrusted steps that I need to walk up. Also no problems with help from Crabs. Once I got hold of the railings, it was easy to slowly climb up. 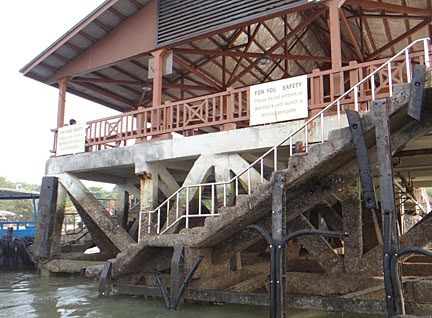 The paths at Chek Jawa are gravelly, with some slopes. All possible to do safely by walking carefully with the aid of a walking stick. I made sure to look down and ensure The Foot is stable before transferring weight, so that there aren't any surprising wobbles due to large pieces of gravel. 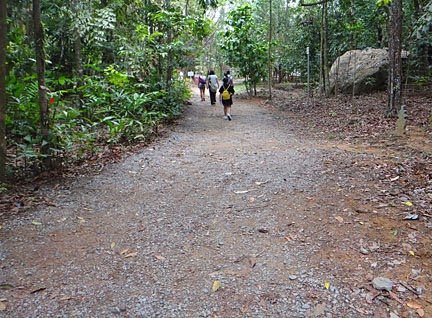 Here's the families who made the time and effort to come for our walk. Thank you! 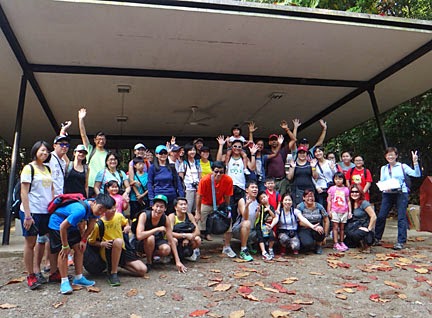 The rest of the route is on a boardwalk, which is very easy to walk on. Here's Pei Yan (in blue) with her group sharing about the towering Nipah palm which produce 'attap-chee'. The palms were blooming today! 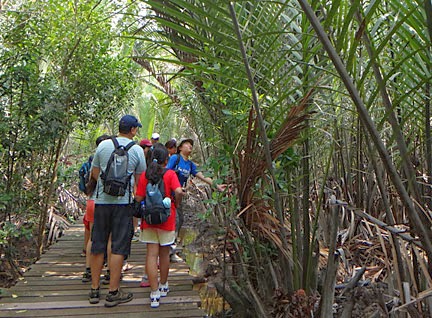 Sankar and Jonathan (the two guys in green facing camera) take another group. Chay Hoon and Ley Kun and Ivan also guided, but I neglected to take photos of them. So sorry. 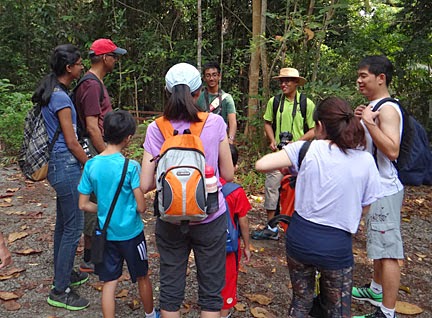 Among the awesome wildlife spotted (by the visitors!) was my favourite mudskipper: the Blue-spotted mudskipper. 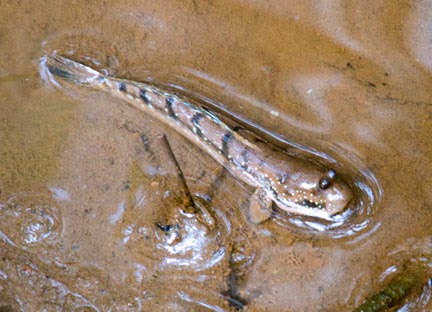 There are also many tiny colourful fiddler crabs that usually the kids spot first. 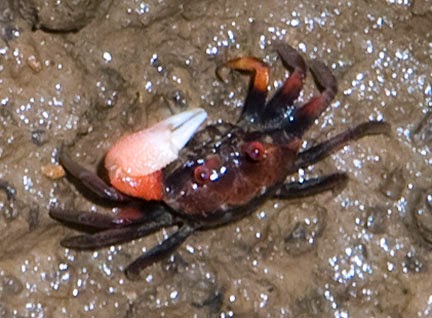 Mama Crab Ley Kun was very excited by the carpet of fallen durian flowers! This means that we should have a good durian crop in about 100 days! 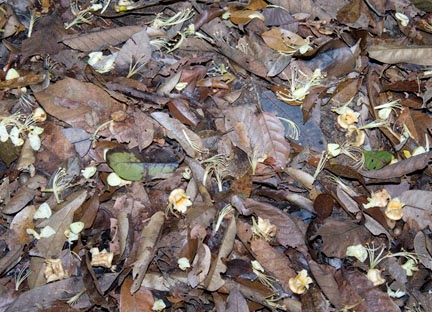 There was another large group of visitors who gathered for a treasure hunt-like event. We found out it was a parent support group event. Very nice to see parents and their kids at Chek Jawa. A pity about the use of the megaphone though. 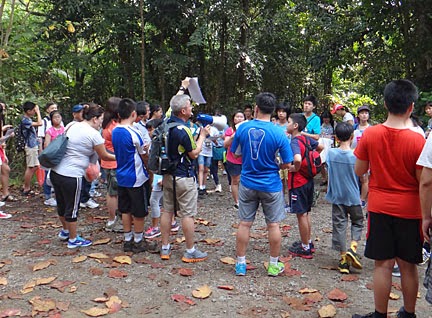 The parents had an info pack which included the NParks Chek Jawa pamphlet. I asked to look at their "treasure hunt" sheet and it turned out to be the guide sheets put up by the Raffles Museum of Biodiversity Research at the time when we were doing guided walks in 2001 before reclamation at Chek Jawa was deferred. 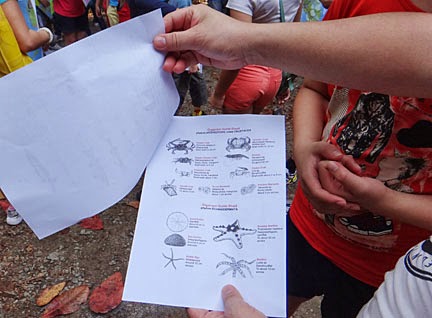 Chek Jawa is a beautiful series of mangroves, rocky shores, seagrass meadows and sandy shores. I ducked out half-way of our usual 2km tour and was exhausted by the time I got to the Visitor Centre where we usually end. I didn't even take photos of the kids doing their beautiful drawings. My bad. 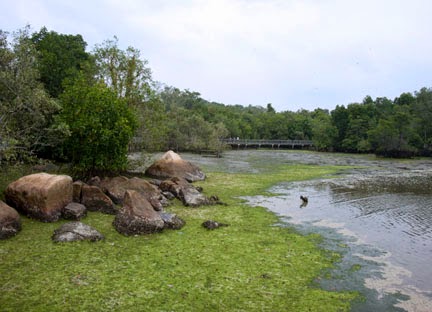 The big highlight of the trip is Black Pepper Crab! I've missed eating this for 6 months! When the dish arrived, all conversation stopped and was replaced by quiet, blissful crunching and sucking. 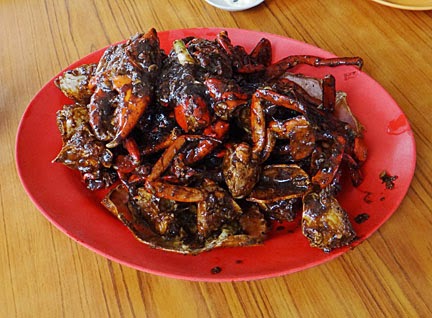 On the way back to the mainland, I was all prepared to show my metal implant card at the metal detector that we usually have to go through. The Foot (in photo) looked fine after the longest walking day out so far (8 hours). A little swollen and sore, but not incapacitating. Once I got home, I elevated and iced and had a short nap and all was good. 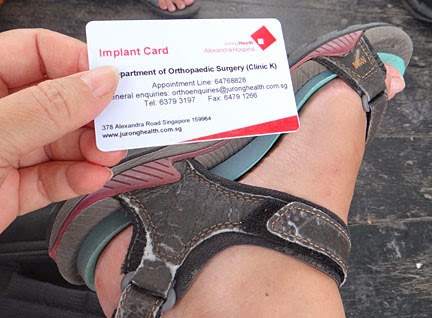 Thanks to all the Crabs who looked after me getting on and off the boat, and who allowed me to pretend to guide, when actually, I didn't do much of it. I'm slowly regaining confidence in being able to do field trips soon.

There's lots of reasons to visit Pulau Ubin and Chek Jawa. Come and join the Naked Hermit Crabs for the next free monthly guided tour and find out more about Pulau Ubin and explore it on your own.
Posted by Ria Tan at 12:43 PM