What caused the recent mass fish deaths? What does it mean for coastal fish farming and the shores nearby?
NO. The cause is NOT the recent oil spills. Because ... Geography!


First of all, I seriously doubt the recent three oil spills in the SOUTH had anything to do with the mass fish deaths in the NORTH. As you can see from the image below.
Yes, the 2010 oil spill reached Changi and Chek Jawa because it was huge (2,500 tonnes) and located at the EAST. The three oil spills in Jan-Feb 2014 totaled 760 tonnes and happened well in the south. So basic geography suggests that the recent oil spills are most unlikely to have anything to do with mass fish deaths in the Eastern fish farms and Western fish farms.

What killed the farm fishes?

According to media reports the Agri-Food and Veterinary Authority (AVA) attributes the mass deaths of farmed fishes variously to 'neap tide', 'hot weather' and 'plankton bloom'. What does this all mean?

Thanks to Shannon Lim, I got a better idea of what probably happened:

Since December 2013, it has been relatively cloudless. This means more light falling on the narrow Johor Strait, raising water temperatures. Smaller bodies of water heat up faster than larger bodies like the waters south of Singapore.

What is neap tide and how does it play a role? Every day, Singapore has two low tides and two high tides. But the height of the tide is not the same every day and changes with the phase of the moon. During a full moon or new moon, the moon and sun are lined up. Their combined gravitational effect results in an extra high and extra low tide. This is called a spring tide because the water appears to spring up. At a quarter moon or three-quarter moon, the sun's gravity works at right angles to that of the moon. This results in a smaller difference in height between the low and high tide. This is called a neap tide. More about tides here.

During a neap tide, the water is more 'stagnant' and there is less water circulation because the difference between high and low tide is less. Micro-organisms thrive in such calmer water conditions.

It has also been relatively dry since December 2013. This means the waters in the narrow Johor Strait is less diluted with freshwater flowing down from the rivers in Johor that drain into the Strait. Micro-organisms thrive on nutrients, and less dilution means more concentrated nutrients. The nutrients that oxygen-sucking organisms thrive on can come from various sources including uneaten fish feed, fish poop, agricultural run off, even phosphates in detergent. More about fish kills on Wikipedia.

Dumping dead farm fishes into the water just makes things worse. Rotting fishes mean exploding micro-organisms as they 'eat' the dead fish while sucking up more oxygen in the process.

Shannon also points out that increased temperatures also speed up the growth and population of bloodsucking and flesh-eating fish parasites. These target the gills and thus literally clog the fish to death.

[Update 18 Feb: On 13 Feb, Malaysian media reported that at Tanjung Kupang in West Johor Strait "at least 10 fish farms and 250 traditional fishermen were affected by the death of the fishes in the past four days, believed to be due to off-shore land reclamation works in the vicinity." On 16 Feb, Malaysian media reported the Johor state government expected "a full report from the Environmental Investigation Agency within this week" and "Whatever it is, we have to wait for the report before pointing fingers". They also reported that "The Johor government-owned Kumpulan Prasarana Rakyat Johor Bhd has denied that the mass fish deaths was caused by land reclamation work nearby."
On 17 Feb, Malaysian media reported that The Department of Environment attributed the mass fish deaths, including those farmed in sea cages off Tanjung Kupang, to "the 'red tide' phenomenon"... "caused by excessive plankton resulting in reduced oxygen in the water." It added "A similar incident also occurred on Dec 28, 2009. Nevertheless, DOE will continue to monitor and take enforcement measures on the premises in Gelang Patah," 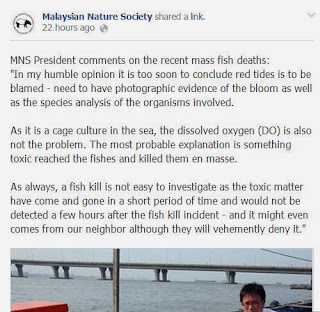 In a post on 17 Feb on the Malaysian Nature Society facebook page, the MNS President commented on the recent mass fish deaths: "In my humble opinion it is too soon to conclude red tides is to be blamed - need to have photographic evidence of the bloom as well as the species analysis of the organisms involved. As it is a cage culture in the sea, the dissolved oxygen (DO) is also not the problem. The most probable explanation is something toxic reached the fishes and killed them en masse. As always, a fish kill is not easy to investigate as the toxic matter have come and gone in a short period of time and would not be detected a few hours after the fish kill incident - and it might even comes from our neighbor although they will vehemently deny it."

What about wild fishes?

As populations of oxygen-sucking organisms explode, they create 'dead zones' in the water lacking oxygen. These zones kill immobile or slow-moving animals. Animals that swim into such a zone can succumb quickly and die too. Dead zones occur throughout the world in freshwater and seas. They can be vast and some occur periodically with annual seasonal changes. More about dead zones on Wikipedia.

On 11 Feb, Channel 8 news reported that thousands of dead fishes were seen at Raffles Marina (next to the Second Link) and the team from the St John's Island Marine Lab also observed similar sightings between the Second Link and Tuas View.

On 12 Feb, Chay Hoon did a survey of Changi Point and another stretch of Changi and found many dead wild fishes too. On 14 Feb, volunteers continued to conduct surveys. The entire stretch of Pasir Ris was surveyed by Heng Pei Yan and Loh Kok Sheng. At Changi, Monday Morgue reported "Lots of fishes that were likely from the fish farms (e.g. groupers, snappers, barramundi, pompano and golden trevally), but there were quite a number of wild fishes affected as well." More photos of dead fish at Changi on 14 Feb by Ivan Kwan. Very similar to what I saw at Pasir Ris during the mass deaths of farm fishes in 2009.

Is the water safe for humans?

On 12 Feb Today Online reported that "The AVA said it has collected samples from the affected farms for analysis and no marine biotoxins were detected."

Besides killing marine life by reducing oxygen levels, some kinds of algal blooms can be dangerous to humans too. These are often referred to as 'red tides' (although they are not always red or caused by the tide) and more properly called Harmful Algal Blooms. Such a bloom can be dangerous because the tiny algae produce toxins. Filter-feeding animals such as clams concentrate these toxins. The toxins do not harm the clams, but can be fatal to humans and other animals such as otters that eat the clams. The toxins are not destroyed by cooking. Crabs and other marine creatures can also concentrate these toxins. More about red tides here.

What is being done by farms during the mass fish deaths?

Here are some of the actions reported in media articles and my comments about them:

"Send in more workers to deploy aeration systems to help normalise the water conditions"; "Set up standby aeration systems"; "Lower net cages" ostensibly to less oxygen-poor water: This kind of action seems futile in the face of a 'dead zone' of unknown size and cause.

"Pouring medicine into the water to increase the immunity of the fish": Adding more chemicals to already stressed water conditions does not seem like a wise course of action to me.

"Reduce or stop feeding, so as to improve water quality and circulation": Good to know AVA and fish farmers realise farming activities do compromise water quality.

What is being suggested to avoid another mass fish death incident at farms?

One farmer suggested "designating new sites to set up fish farms, such as north of Pulau Tekong or in waters with less algae count, which can be used to house stock in the event of a crisis of this nature": Once again, probably futile in the face of a 'dead zone' of unknown location, size and cause. The area near Pulau Tekong is probably not ideal for fish farms as it lies at the mouth of the Johor River. The constant flow of freshwater reduces the salinity in the area and also brings with it pollutants from upstream.

"The Government could monitor the algae or plankton levels in the waters weekly and alert farmers when levels become critical so precautionary measures can be taken." I am astonished this is not already being done. Particularly since the fish farms had already experienced a similar mass fish death in 2009.

Some possible actions that were not mentioned in the media:

Why don't we avoid rearing "more susceptible species like grouper, threadfin and golden trevally" (as identified by AVA in Minister Khaw's blog post). Wild groupers found in nature are adapted to high-salinity reefs. The Johor Strait has low salinity because of the constant flow of freshwater from the rivers of Johor that drain into it.

A more sustainable approach to coastal farming in Singapore would probably result in better quality and quantity production. Why not look into farming methods that do not pollute the water or blight the environment. Why not rear animals more adapted to the existing water conditions in the Johor Strait and which can better withstand low-oxygen 'dead zones'? Particularly as such events will probably become more regular and more closely spaced with climate change?

Shannon Lim shares more about a sustainable approach to aquaculture in this video clip. More on his OnHand Agrarian facebook page.


Updated 15 Feb: Shannon also left the following comment on the MND facebook post entry of MOS Dr Maliki Osman's visit to affect fish farmers on 13 Feb. Unfortunately, due to facebook settings, only Shannon's facebook friends can see his comments. So I reproduce Shannon's comments below because I feel it highlights some of the critical issues facing the coastal fish farming industry in Singapore today.

- DO monitors, all along the straits.
- Scientifically sound advice like what livestock do well in the straits(We currently farm reef fish in an estuary)
- Civil engineering support. These platforms are made from wood. Wood rots. Plastic and 6063 aluminium are cheaper, cleaner and longer lasting. And they burn diesel generators instead of using solar panels because they think moisture content affects aluminium is affected by "rust". No electricity means no aerators.
- Knotless nets so farmers don't kill their fish every time they take stock
- A rubbish collection service
- A proper place to berth boats. Changi Creek is NOT acceptable. They can't fit anything bigger than a sampan there.
- Blackwater disposal service. Currently farmers are forced to shit in the sea. Amongst the seafood. Seriously, I'd die too if I had to live in that for 12 months.

Come on AVA, you guys have more than enough resources and it's obvious that these farms desperately need help. We're Singaporean, we don't sit around waiting and hoping for the tides to turn. We make shit happen.


Related links
My previous posts on aquaculture issues in Singapore
Posted by Ria Tan at 3:01 PM