Crocodile! What should I do?!

In Singapore, we are fortunate to be able to regularly see crocodiles at Sungei Buloh Wetland Reserve! What should we do if we see one?
First of all, we should make sure that what we are seeing is indeed a crocodile!


Often, large Malayan water monitor lizards are mistaken for crocodiles. Our monitor lizards can grow to 2m or longer. While in the water, the lizard often swims by placing its limbs against its body and undulating its long tail from side to side. Its snout is quite short and tail is long and slender.

A crocodile has a long snout and a much thicker fatter tail. It may swim in the same way as the monitor lizard. It may also often sink into the murky water and emerge some distance away. Here's a video clip of a crocodile doing this, by sgbeachbum.
disappearing croc @ sg buloh wetland reserve - Oct2012 from SgBeachBum on Vimeo.

Sometimes, all that sticks out above water are the crocodile's eyes and the tip of its long snout.

A crocodile on the other hand, has a long snout and jaws full of teeth! And a thick fat tail. Its scales are also much bigger. Here's more on how to tell apart monitor lizards and crocodiles on the Sungei Buloh website. And more about how ordinary monitor lizards are mistakenly identified as all kind of animals that don't even occur naturally in Singapore.

So it IS a crocodile! What should I do?!

When we are sure it's a crocodile, we should admire it from a distance, leaving it alone to go about its business. Among the things a crocodile might be seen doing is simply lying in the sun. It does this to warm up. Sometimes, it might have its mouth wide open, which is how a crocodile tries to cool down on a hot day (much like the way a dog pants). It's not doing this to show aggression or to get ready to bite. Here's a video clip of a crocodile doing this, taken by sgbeachbum.
solar-croc @ SBWR from SgBeachBum on Vimeo.


Sometimes, we may be lucky to observe a crocodile hunting! Crocodiles usually hunt while submerged in water, often lying in wait and pretending to be an innocuous log. This is also why it is important to stay on the path and not go into the water. Here's a video clip of a crocodile lurking in the water, taken by sgbeachbum.
crocodylus porosus @ Sg Buloh 23Apr2011 from SgBeachBum on Vimeo.

Why are crocodiles special?

The presence of crocodiles at Sungei Buloh Wetland Reserve shows that the ecosystem is rich and thriving. Thus able to support a population of these magnificent top predators. Crocodiles have been seen at Sungei Buloh Wetland Reserve for more than a decade. These awesome beasts are most often seen near the Main Bridge especially at lowish tides. Visitors have always been alerted to crocodiles by the prominent triangular "Watch It" signs posted all over the Reserve for the last decade or so. 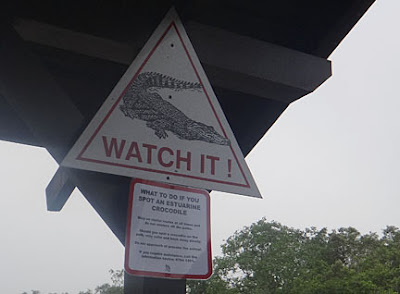 Recently, the crocodiles at Sungei Buloh were in the news, with many people expressing concern that the crocodiles posed a danger to humans.
Like any wild animal, crocodiles will not harm humans if they are not disturbed and we keep a respectful distance from them. The Sungei Buloh Wetland Reserve website has sensible advice on "What to do if you spot an Estuarine Crocodile?"


Visitors are strongly advised to stay on visitor routes and not venture off the paths. On occasion, the crocodiles have been spotted basking on the visitor routes. Should visitors encounter a crocodile on the path, they should stay calm and back away slowly. Do not provoke the animal. Staff are present to help visitors should they need any assistance – please call the information counter at Tel: 6794 1401. Under no circumstances should visitors approach a crocodile. As with all wild animals, crocodiles should be treated with caution.

This advice is also posted at the entrance and many other places in the Reserve. 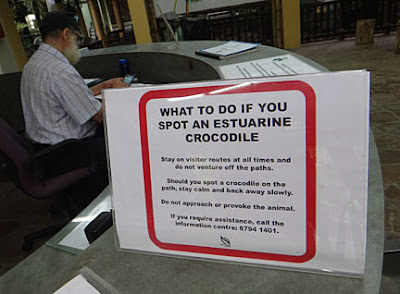 In response to some alarm expressed in the media, several experienced nature volunteers have written letters to allay public fears. Here is the letter written by David Tan.


It was with great disappointment that I read Mr Shawn Low’s letter regarding the “recent sightings” of crocodiles at the Sungei Buloh Wetland Reserve. As a birdwatcher, I have been a regular visitor of Sungei Buloh for well over a decade and can confirm that the presence of Estuarine Crocodiles at Sungei Buloh is neither a recent occurrence nor a secret, and that at no point have the crocodiles posed a significant threat to the visiting public.

In fact, prominent signs warning visitors of the potential presence of crocodiles – the most conspicuous of which is located at the first sluice gate just beyond the main bridge – have been in place since well before my first ever visit to the park in 2001 as an 11 year-old, and several new signs have recently been put up by NParks.

In fact, despite Mr. Low’s claim that attacks by crocodiles have been ‘regularly’ documented in Australia, the International Union for Conservation of Nature (IUCN) reports that the average number of crocodile attacks per year in Australia (2000 - 2007) is only 3.6, with most of the attacks occurring when people are physically in the water. At Sungei Buloh, the raised gravel paths and boardwalks ensure that visitors are kept well away from the water and visitors are not allowed to stray from the designated trails, thus limiting the number of crocodile attacks on humans to zero.

This is not to say that the risk is entirely absent, and it is important to remember that crocodiles are wild animals that will defend themselves when disturbed or provoked. It is thus important that visitors to the nature reserve remain respectful and keep their distance from wild crocodiles even as we appreciate their beauty within their natural habitat.

Singapore's leading nature guide and vertebrate expert, Subaraj Rajathurai, also shared more on TV, about the crocodiles and what we should do when we encounter one.


How can I see the crocodiles at Sungei Buloh?

Crocodiles are magnificent jewels that crown the mangroves and wetlands of Sungei Buloh Wetland Reserve!

The best chance to spot a crocodile is to go with a nature guide. There are free guided walks at the Reserve every Saturday, as well as many other exciting nature happenings there. You can also volunteer with the Reserve, to be a nature guide as well as help with other nature work there. More details on the Sungei Buloh Wetland Reserve website. I hope you will have the good luck to view the crocodiles for yourself!