Trash at Pulau Ubin and fish farms nearby

We check out more trashy shores at Pulau Ubin this wet Sunday morning. Andy is doing a recce for a teacher leading students to do clean up at this stretch of Ketam beach at Pulau Ubin for International Coastal Cleanup later this month. 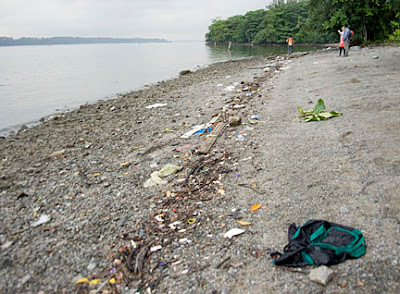 First stop is Ketam beach, then a quick look off the Sensory Trail.

This Ketam shore is just opposite many floating fish farms (indicated with yellow arrows). 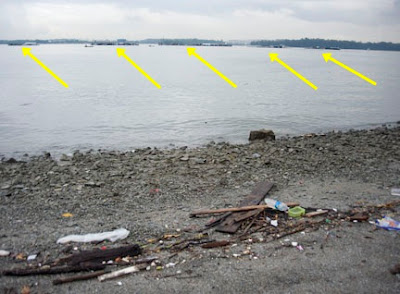 There are some people fishing with lines here. As well as three untidy shacks along and floating on the shore. 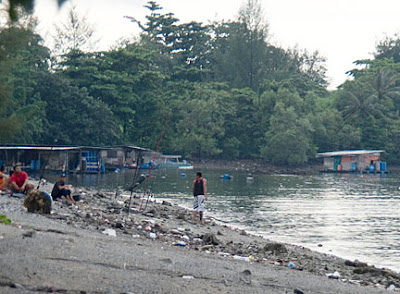 A closer look at one of the shacks. I'm not sure what is going on here. Do they have anything to do with the fish farms? 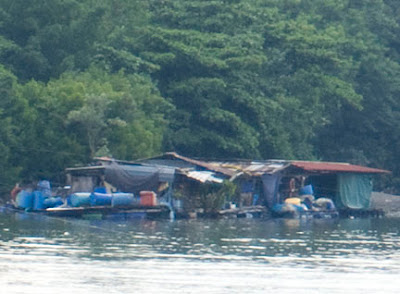 When we were there, the shore was being diligently cleaned by the official cleaners in their bright uniforms (we met one two weeks ago). We saw some hard at work in the distance. 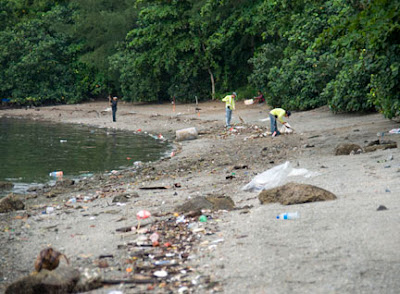 The cleaners not only worked to clean the beach, but also had cycled all the way from Ubin Town on their tricycles and bicycles. The white van is Uncle Chu's who drove us here. 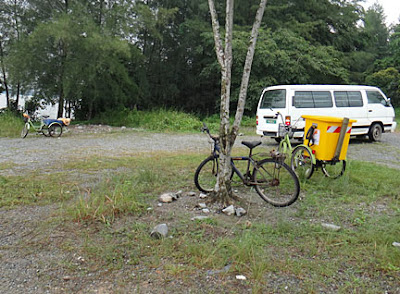 The trash load was light, and these items probably just 'landed' on the beach: gunny sacks, large plastic bags. 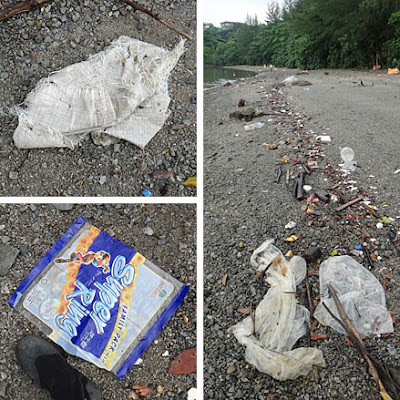 Not everything that washes up is trash. There are lots of mangrove seedlings and seeds of other shore plants that float and end up in the same high water line as trash. Animals small and large find food among the natural flotsam. Andy spotted footprints of wild boar along the trash line. The demand for a clean beach, however, means everything is swept up (see the difference between the cleaned part in the photo on the right). If we can stop litter from landing on the beach, the natural processes of nature can be left alone as there is no need to clean up the beach! 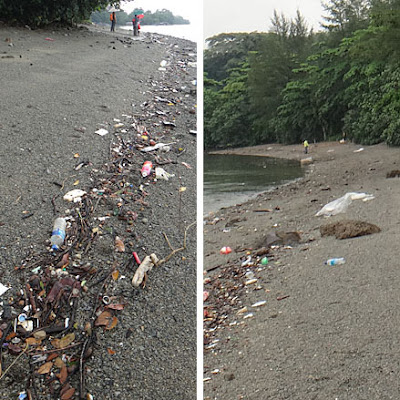 The shore is alive! Pei Yan found this Sponge crab without a sponge. 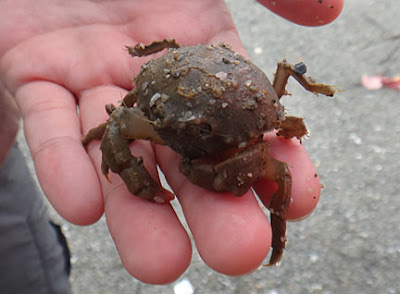 We then headed out a short stretch of shore near the Sensory Trail. There are fish farms near this shore too. I took these photos of them on the way to Ubin. These fish farms are closer to Chek Jawa. 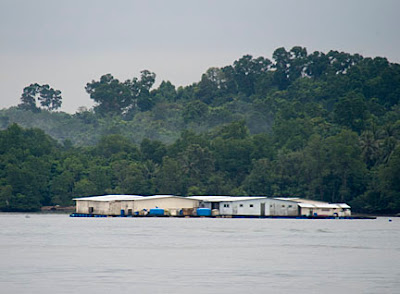 Like other fish farms, they seem to be built on platforms that float on blue drums. 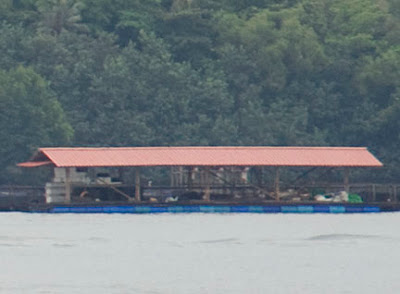 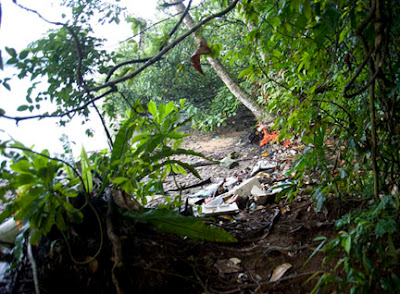 This mess included orange webbing, lots of styrofoam and all kinds of plastic. 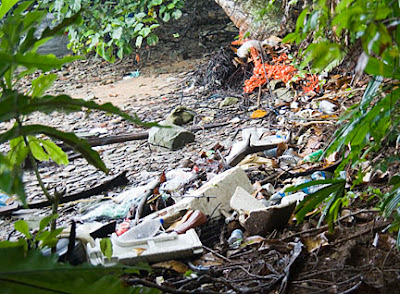 Also seen along this short stretch: several blue drums, large tarpaulins and heavy nets that are used to make up fish farm cages (not to catch swimming fishes, like driftnets). 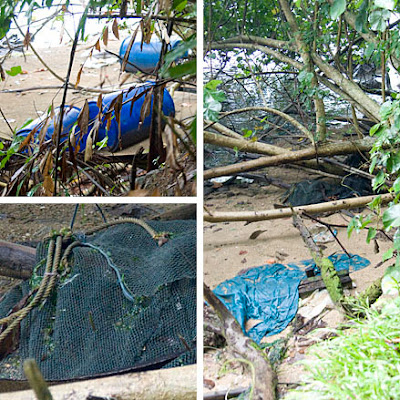 This heavy net was draped very high up on the shore. 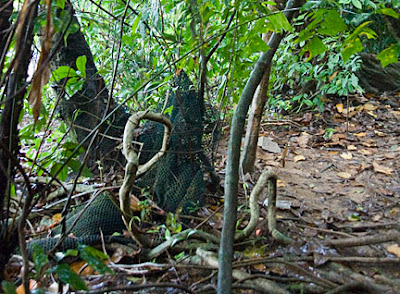 The remains of a  coffee table. 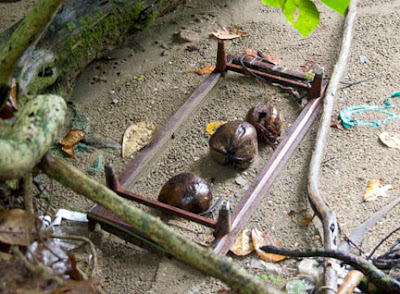 There is also a lot of trash that clearly come from campers or beach goers. Trash was strewn all around the remains of this fire. 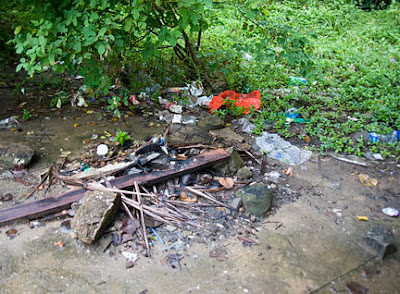 There was a heartbreaking pile of rubbish comprising mainly of beer cans and the remains of meals. 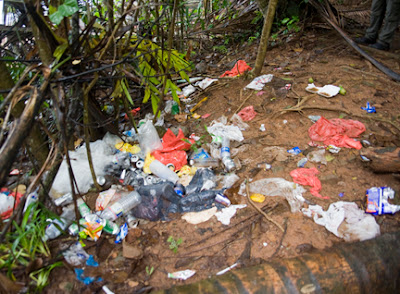 A closer look at the trash. If the party goers could bring filled cans of beer to the beach, why can't they bring out the empty cans? 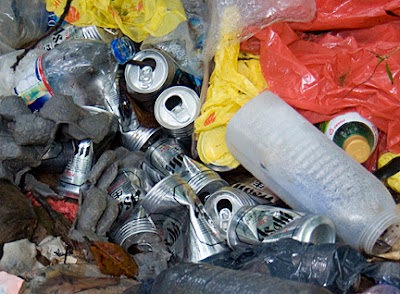 On the way home, we saw jet skiers parked at the Ubin restaurant. Let's hope the jet skiers don't zoom over Chek Jawa's and Pulau Ubin's seagrass meadows. This can tear up the meadows, and it takes a while for such damage to recover. 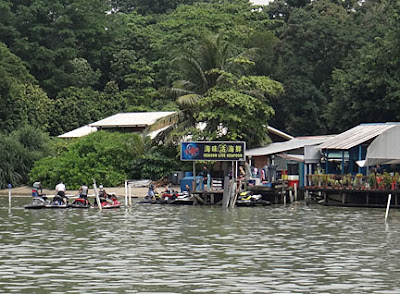 On the way to Pulau Ubin, as usual, I saw a fisherman in a sampan just off Changi beach who appears to be laying a fish net or trap. On the horizon is Pulau Tekong. 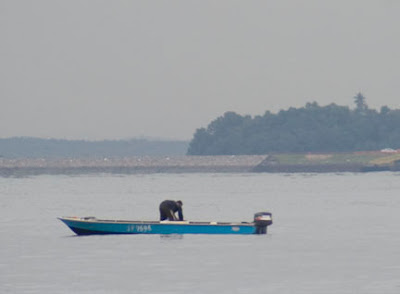 Yesterday, there was a  large floating platform tied up next to Changi Point Ferry Terminal. 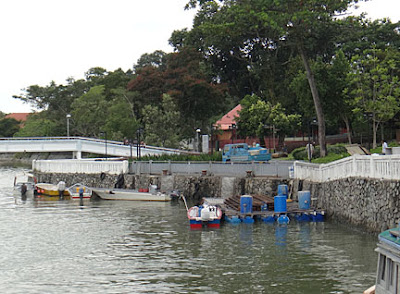 A closer look at the platform which looks like those used at fish farms. And a huge stack of bags of ice being transferred into a small boat. These look like people from fish farms. 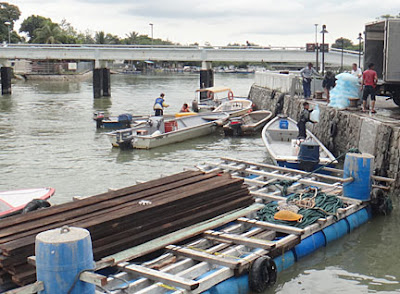 There was also a large pile of wood and plywood at this area. 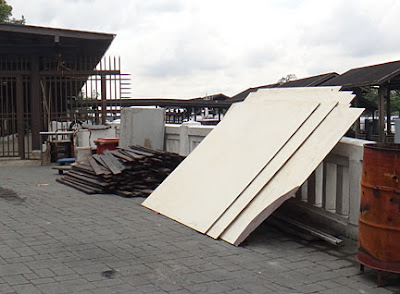 This morning, the platform was gone. But the area was busy with lots of stuff being unloaded into small boats. 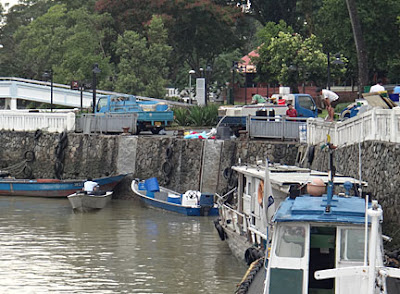 Here's an overview of the floating fish farms near Pulau Ubin and Pasir Ris Park. 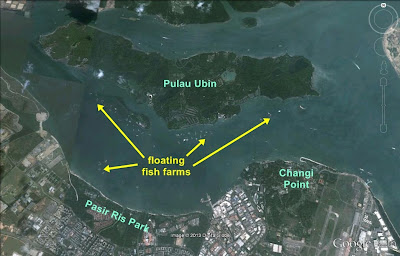 The two areas we checked out today are marked with orange spots. 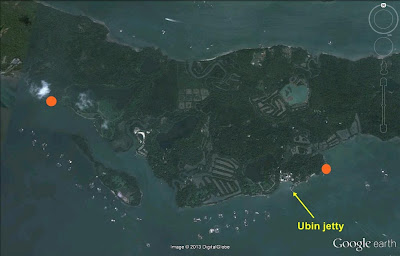 Here's a slide show of the trash I've seen at Pulau Ubin that probably came from the nearby fish farms.

Created with Admarket's flickrSLiDR.
Trash on our recreational beaches costs taxpayers $1.4m a year to clean up! Surely, it makes more sense to stop the trash from entering our waters in the first place?

More about trash on Pulau Ubin and fish farms during our survey two weeks ago of another part of Pulau Ubin.