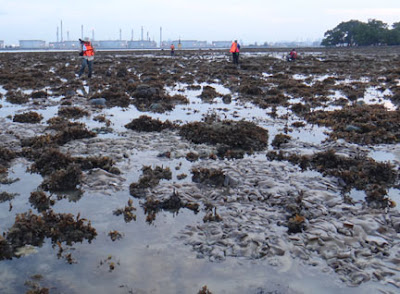 I noticed some coral bleaching and the team had an encounter with a fisherman and his nets and traps.

We finally decided to visit the part of northern Pulau Semakau that faces the rich reefy shores of Terumbu Raya. This shore is usually a very long walk by land, so we decided to make an amphibious landing there!

Among the special finds is this Tiger cowrie (Cypraea tigris) which is rather well camouflaged when its 'hairy' mantle covers its shiny shell. 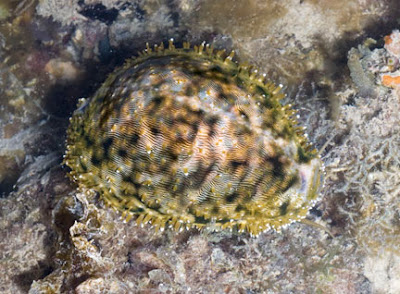 Here's what the spotty shell looks like when the flesh mantle is retracted. We have seen these snails at Terumbu Semakau as well as Terumbu Raya while divers sometimes spot them at Pulau Hantu. 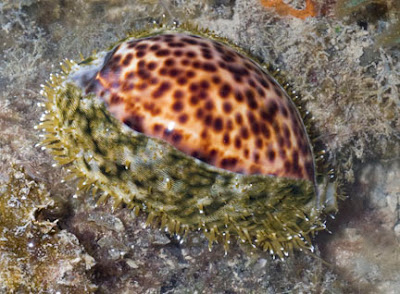 My first time sighting of these very pretty spotty corallimorphs! Corallimorphs (Order Corallimorpharia) are not true sea anemones. They were growing among Button zoanthids (Zoanthus sp.). 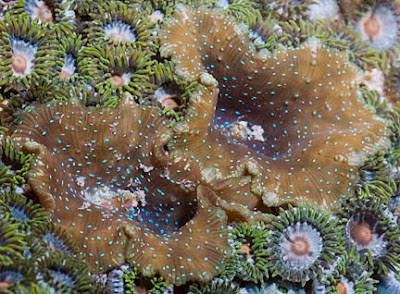 Here's some other corallimorphs that I saw on this shore, some have ridges, others look like hairy short-pile carpets and yet others have beaded oral disks. They all have yet to be identified.

Although it was daylight, I did manage to catch a glimpse of this little octopus sliding away into its burrow. 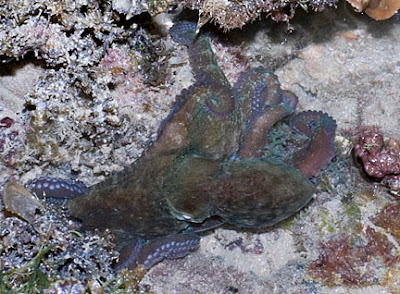 I saw the Thurdilla slug first before I realised there was a nudibranch nearby: Chromodoris lineolata. 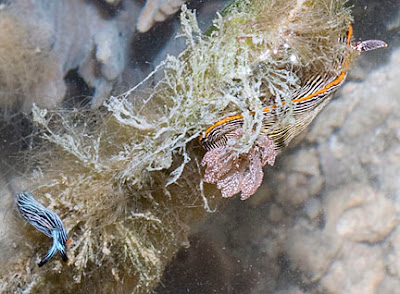 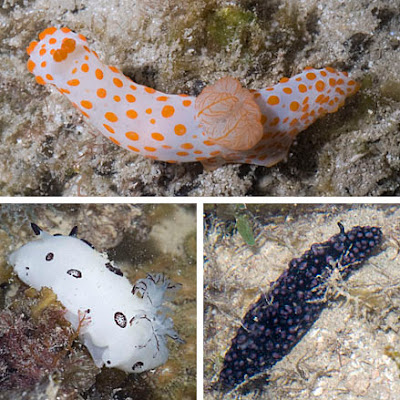 As I was trying to take a photo of a sea anemone, when an elegant Yellow-lipped sea krait (Laticauda colubrina) slithered into my frame! It was slowly and methodically checking all the crevices including the one near my bootie! Although this snake has venom deadly to humans, it is a calm and peaceful snake that will not harm anyone if it is left alone to go about its business. 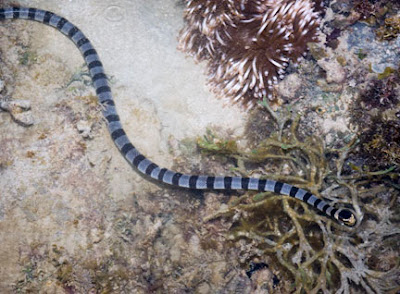 I saw several clumps of these pulsating Xenia soft corals (Heteroxenia sp.). I have seen them on the Eastern shore of Pulau Semakau as well as some nearby Terumbus, so it's not really a big surprise to see them here too. 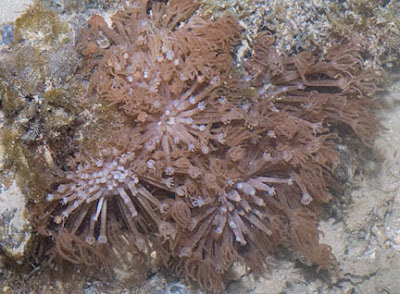 Another interesting sighting for me was this humungous sea cucumber (it was about 40cm long). I think it's Stichopus hermanni which so far I've only seen on Pulau Semakau. Those seen were black or dark green, but I've searched online and it seems this sea cucumber may also be pale.

None of the Bubble-tip sea anemones (Entacmea quadricolor) were bleaching. Most had signs of anemonefishes but the fishes were too shy to show themselves.

I saw this cluster of Magnificent anemones (Heteractis magnifica), several Giant sea anemones (Stichodactyla gigantea) and one Fire anemone (Actinodendron sp.). Of course, also many Frilly sea anemones (Phymanthus sp.). None of the anemones I saw were bleaching. 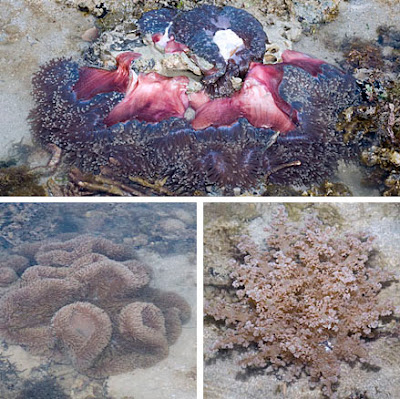 This part of the shore is very rich in corals, many different kinds found here often growing crammed near one another. I checked for bleaching and noticed a few pale colonies, strangely, mostly in deeper water at the reef crest. Colonies out of water this low tide seemed mostly alright. 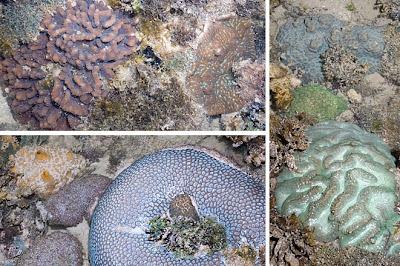 These corals are usually the first to bleach but those I saw seemed alright: Anchor corals (Family Euphyllidae) and Cauliflower coral (Pocillopora sp.). I didn't notice any Crinkled sandpaper coral (Psammocora sp.) though.

The most common corals were Favid corals (Family Faviidae) and most of them seemed alright except for a few small ones on the reef crest that were bleaching. 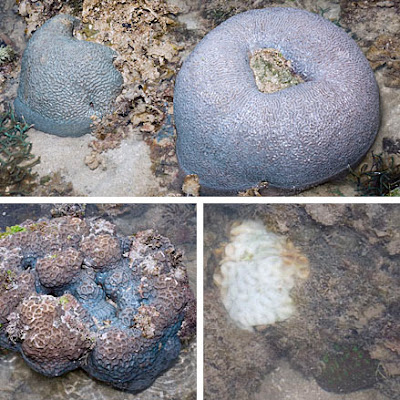 As usual, Pore hard corals (Porites sp.) were abundant and most were alright except for a few that were very pale. 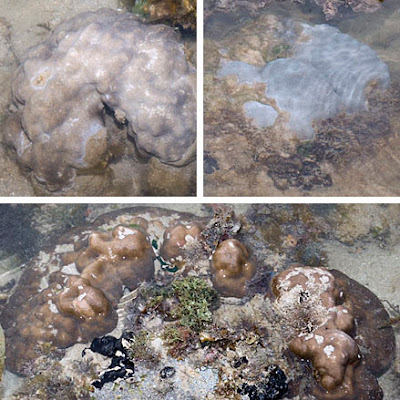 There were many Brain corals (Family Mussidae) on this part of the shore and most were alright although a few were very pale and some had small bleaching patches. 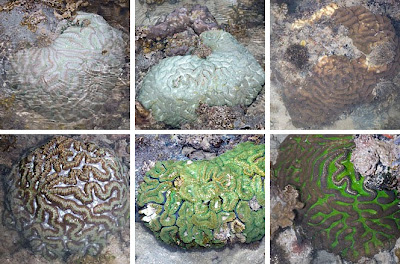 I've seen an entire colony of Brain coral that is whitish, but this one is half white and half not. Is it bleaching? 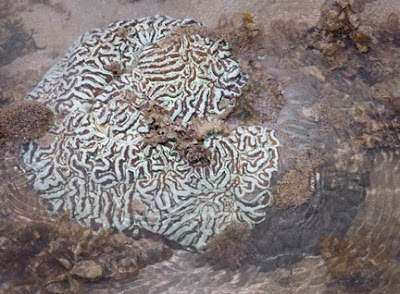 Many of the Anemone and Goniopora corals (Goniopora sp.) I saw were rather pale but none were bleaching. 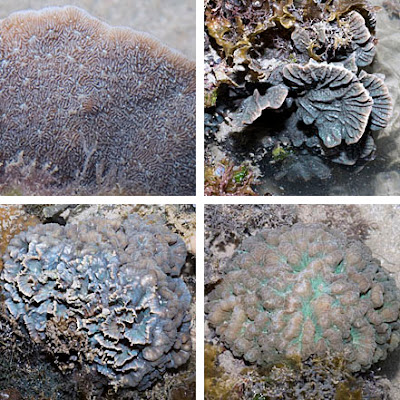 Some of the Disk corals (Turbinaria sp.) I saw were very pale or bleaching, but other plate-like corals like Montipora plate corals (Montipora sp.) and Ridged plate corals (Merulina sp.) were not. 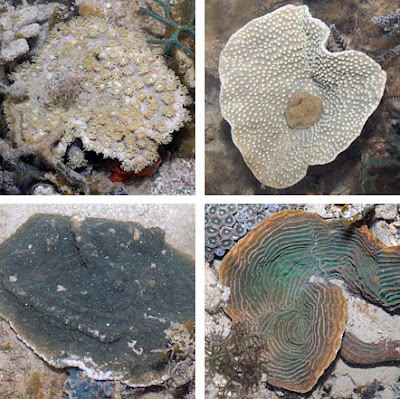 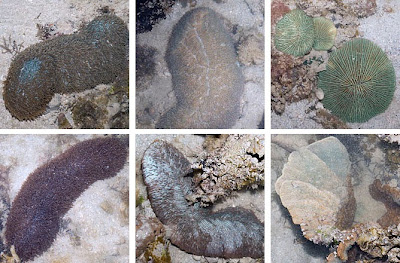 There were large patches of Omelette leathery soft corals and most of them were not bleaching. 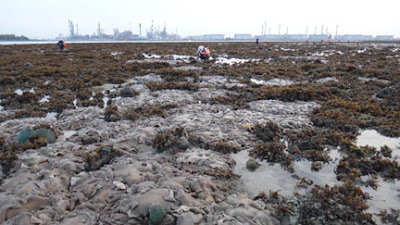 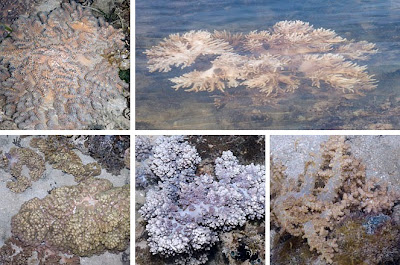 I was happy to see many large Barrel sponges (Xestospongia testudinaria) as well as a wide variety of colourful sponges. 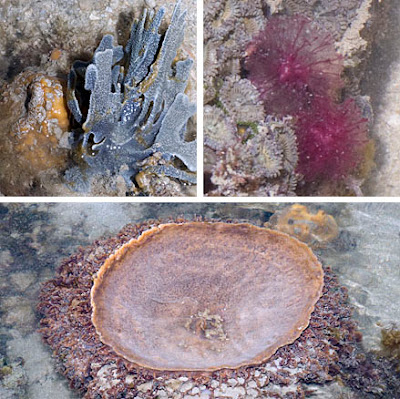 The water was very clear in the outgoing tide but still, I noticed specks in my photos. These turned out to be super tiny things with big eyes. I don't know if they are shrimps or fish or what. Wow! 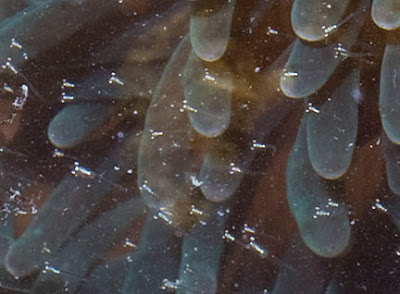 As soon as we arrived in the dark, a fisherman walked over to us and started berating us for damaging and removing his net. Later, I saw him removing his nets which were laid out parallel to the shore around the middle of the seagrass meadows and reef flats.

He carried out two big boxes of these nets, which seemed to span several hundred metres.

The boxes were loaded up onto this clean white sampan flying a Singapore flag. They then appeared to be waiting for the tide to turn, perhaps to lay out the nets then? Andy spent the entire trip checking for abandoned nets and removed one that was about 25m long. I'm sure he will soon blog about it.

The team also saw all kinds of other interesting stuff, especially at the reef edge in deeper water. 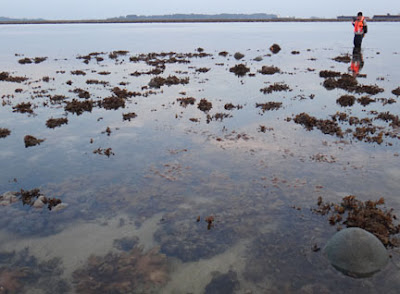 We had a great trip on a beautiful shore with many interesting findings. What a lovely way to end the morning low spring tide trips for the year.

We get a break in September and most of October as there are very few low tides then. The low spring tides will be in the evening for the rest of the year. The glorious morning tides will only resume next year around March or April.

Being away from the shores due to lack of low tides means we can't check the shores for bleaching and other impacts like fishing. I hope the shores stay well until we resume our surveys.