Rocky Changi with nudis and more

The pretty Pink hypselodoris nudibranch! We almost always see this nudibranch on this stretch of rocky shore at Changi! 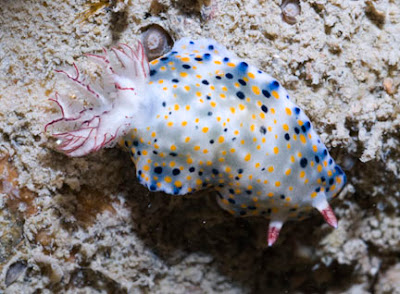 We also saw a seahorse and I noticed interesting animals living on other animals!


I was intrigued by the odd 'branch' curled around some abandoned and encrusted fishing nets. It turned out to be the tail of an Estuarine seahorse (Hippocampus kuda) that was hanging upside down out of water! It must have gotten caught in the low tide. We put it into some water in a rock pool and it seemed fine. I haven't seen a seahorse here since 2011. 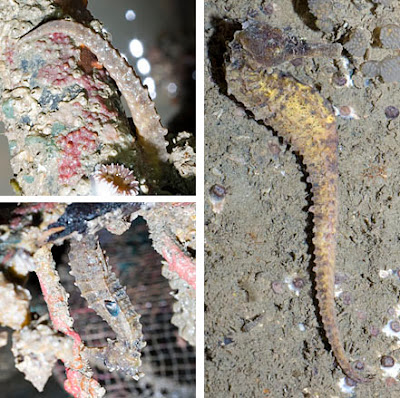 I took a closer look at the clumps of zoanthids (Order Zoanthidea) on the shore and noticed all kinds of animals living among the zoanthid polyps: A kind of fanworm (blue arrow), a sea cucumber (yellow arrow) and possibly a sea anemone (orange arrow). 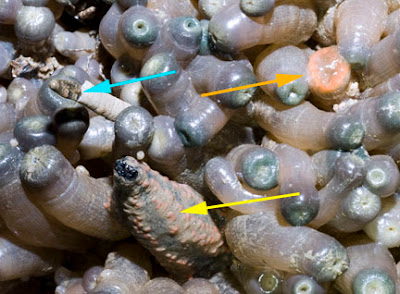 I also saw a strange little sea cucumber as well as many tiny porcelain crabs.

I came across several of these Blue spotted flatworm (cf Pseudoceros indicus), suspiciously wrapped around ascidians, eating them? The rest of the team saw a strange flatworm that we have not seen before. 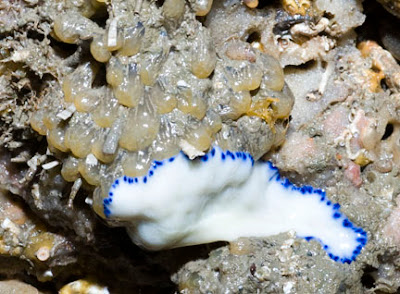 There are sea fans (Order Gorgonacea) on this shore too, but not as many as I had seen in Jun 2012. I saw some sea fans that had recently died. I saw some cerianthids (Order Ceriantharia) but didn't see any flowery sea pens (Family Veretillidae) or Slender sea pens (Virgularia sp.) and didn't see any pink flowery soft coral (Family Nephtheidae). 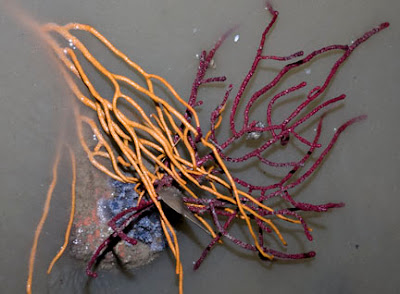 There were, however, many 'bushes' of Stinging hydroids. In this clump, a mama squid had laid her egg capsules! Perfect protection for her young ones. 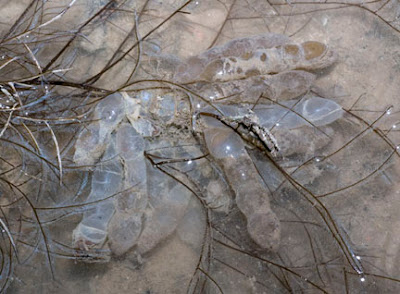 There are also many small patches of Zebra corals (Oulastrea crispata) and smaller patches of other kinds of corals. There were also lots of fan worms (Family Sabellidae) among the rocks. 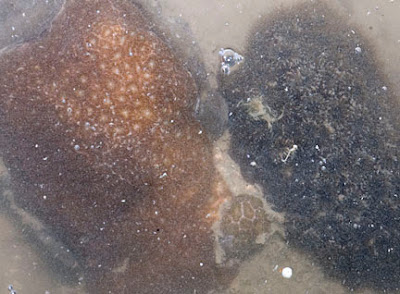 The other special animal found on this shore is the intriguing 'armoured' sea cucumber that I first saw in Jun 2012. I was glad to be able to show them to the team so they can help look out for more. They seemed larger and I saw them even out in the open. There were also many other kinds of sea cucumbers here like the purple and orange ones, and even one large Garlic bread sea cucumber (Holothuria scabra). 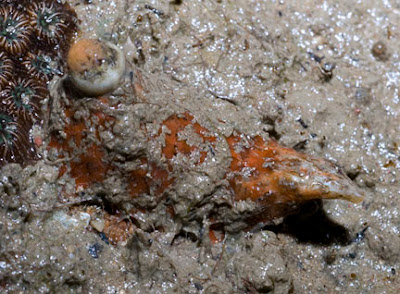 At night, the shore is more lively and we get a better chance of seeing animals like these pretty brittle stars (Class Ophiuroidea). These fast-moving animals rapidly hide even from torchlight and are seldom seen during the day. 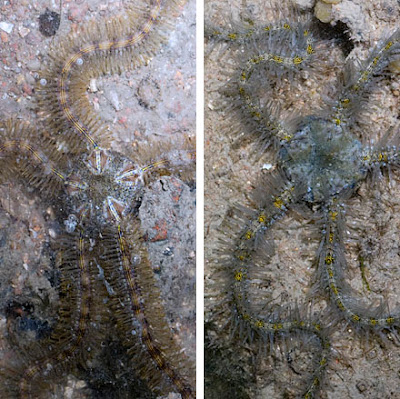 I only saw one feather star (Order Crinodea), but Kok Sheng found five and they had all kinds of interesting animals living on them. 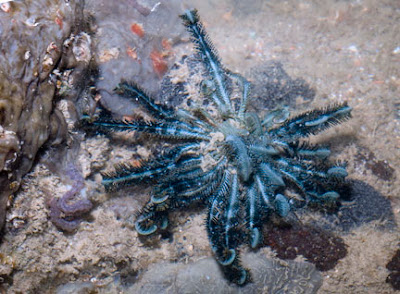 Kok Sheng found this small Ludia sand star (Luidia sp.)  that seemed to have lost some of its arms. Among the identifying features of sea stars at the structure of the tiny features on their bodies.

Mei Lin found this large Eight-armed sand stars (Luidia maculata) with only six arms. We seem to be seeing this 6-armed sea star regularly. Perhaps it is some other kind of Luidia species?

Other sea stars I saw included: A Plain sand star (Astropecten sp.), a Spiny sea star (Gymnanthenea laevis) and many Crown sea stars (Asterina coronata), most were dull and rock-coloured but we found one that was bright orange. 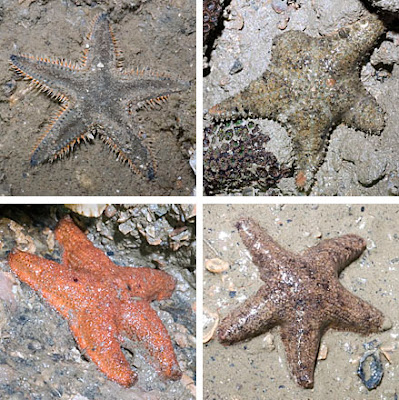 There were many different kinds of swimming crabs (Family Portunidae) in the water. The rocks were full of Purple climber crabs (Metopograpsus sp.) and in the water there were many large Stone crabs (Myomenippe hardwicki). On the pillars Mangrove tree-dwelling crabs (Selatium brocki). There were also many Ovum coweries (Cypraea ovum) on the rocky shore. Sponges are a wonderful home for many kinds of animals. From tiny shrimps, sea anemones, brittle stars to all kinds of worms with long tentacles. 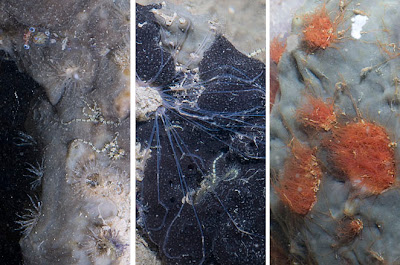 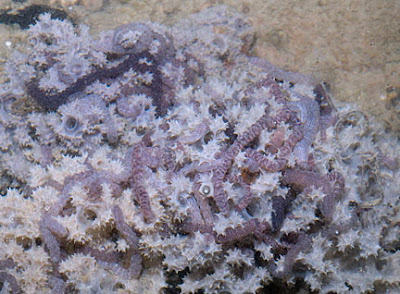 I spotted a lump of sponge moving! Of course sponges don't move. This is because there was a tiny sponge crab underneath! The sponge crab (Family Dromiidae) holds onto the sponge and carries it around as protection. 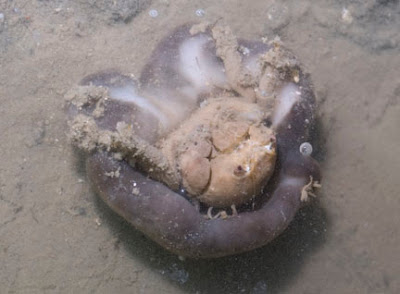 Alas, many of the beautiful animals are impacted by fishing that goes on relentlessly on this shore. There are fish traps, abandoned fishing lines and all kinds of litter than entangled, smother and kill marine life here. 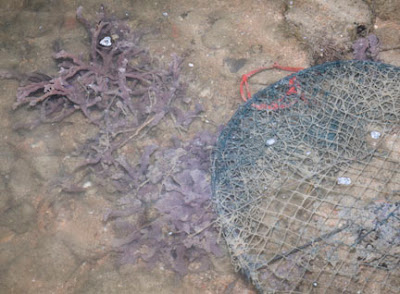 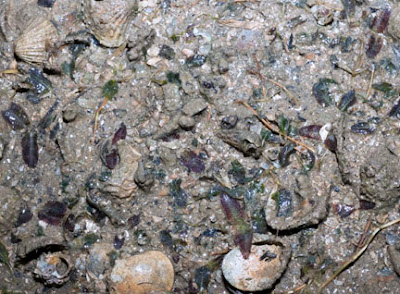 We began our trip at 4am and the sky was still rather clear. We could see the moon! 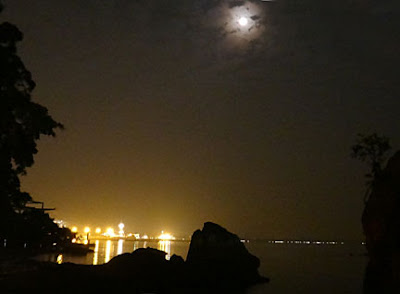 But by the end of our trip just before sunrise, the haze was beginning to build up. I find it more tiring working on the shore with haze.