There doesn't seem much here at first glance. But a closer look reveals a humungous nudibranch! 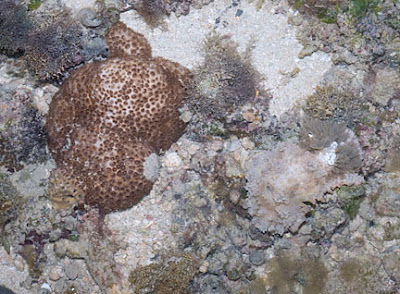 Can you spot it? The nudibranch is about half the size of the brownish lump on the left--which are Sea mat zoanthids (Palythoa tuberculosa).


Here's what the nudibranch looks like. It's the Cauliflower nudibranch (Dendrodoris tuberculosa) and it was about 12cm long. It has white spots on its underside. Kok Sheng later found an even bigger one!

Other nudibranchs I saw were common ones like Glossodoris atromarginata and Phyllidiella pustulosa.

We have learnt from Chay Hoon to carefully check seaweeds for suspicious sap-sucking slugs that closely resemble the seaweeds. I was lucky to spot this slug that has a pair of 'shells' so it appears to be a clam. It looks like Berthelinia sp. We have seen these before but didn't realise they were special until after the Northern Expedition of the Mega Marine Survey, when Dr Kathe Jensen said they were a new record for Singapore! 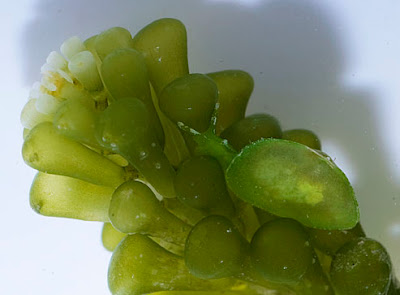 I realised after I took a closer look that there were three slugs of varying sizes on this tiny section of seaweed. Indeed, when I took a closer look at the photo I first took of the slug, it looks like a smaller slug was attached to the bigger one. Perhaps a smaller 'male'? Similar to the situation found with Volvotella slugs (Volvatella vigourouxi)? I also noticed that the slugs remained firmly attached to the slugs by a strong strand of mucus, kind of like terrestrial caterpillars.

It was good to see lots of 'Nemos' today. The rest of the team saw some and I saw at least four fishes of different sizes in this sea anemone. Debby Ng of the Hantu Bloggers explains why they are found in graduated sizes and includes a great video clip of a pair of females fighting. These are False clown anemonefishes (Amphiprion ocellaris) and we missed for a while, until we saw them again on our last trip to Pulau Hantu in Nov 2012. I hope they don't 'disappear' again. 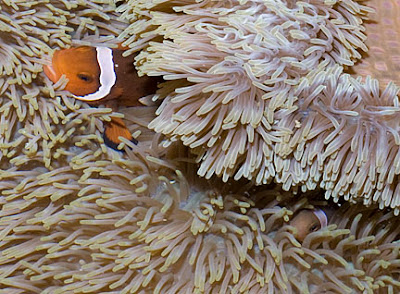 There were also some Blue-spotted fantail rays (Taeniura lymma) skulking among the corals. This is why we need to be careful when exploring the reefs. Marcus found a baby frogfish! Fortunately, no one encounter Mr Stonefish today. 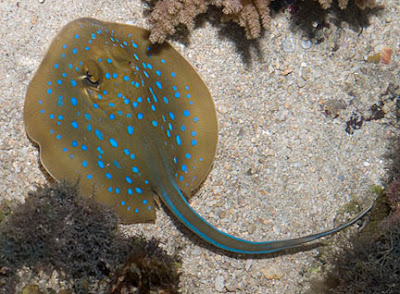 Pei Yan found great stuff too. She found an Alicia anemone (Alicia sp.)! We have suddenly started seeing these anemones. I'm not sure if it's because we are getting better at spotting them or if it's because they are more abundant on our shores. Something to ask Dr Daphne when she comes for the upcoming Southern Expedition. Meanwhile, we must find the intriguing cousin of the Alicia anemone, the amazing Phyllodiscus sea anemone. 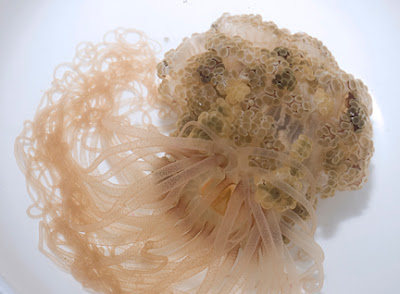 Pei Yan also found this curious shrimp that is already naturally bright red. We're not too sure what it might be. 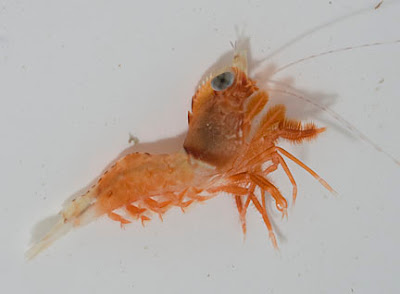 Kok Sheng spotted the evil-looking Haeckel's anemone (Actinostephanus haeckeli) almost as soon as we started our survey. Kwan Siong spotted a bunch of posy anemones. While the usual Magnificent anemone (Heteractis magnifica) was still there, I found another one which looks rather different from it, but similar to those I saw on Terumbu Pempang Tengah a few weeks ago. 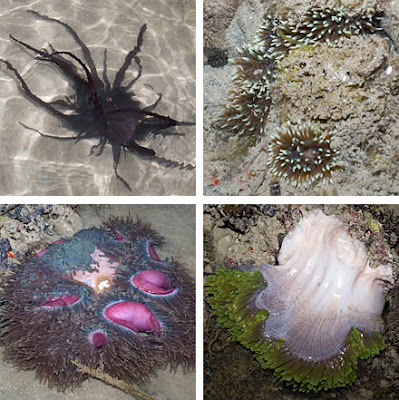 We saw a Coastal horseshoe crab (Tachypleus gigas) and remembered Dr Dennis Gordon's Workshop on Bryozoans and looked for bryozoans on the shell. We found a suspicious cluster.

Today we came across some corals that were partially bleaching, something I had already observed on our Nov 2012 trip here. They were of various species. All the Asparagus flowery soft corals (Family Nephtheidae) were still purplish but many had yellowish tips. Most of the bleaching corals were seen at the mouth of the lagoon facing Pulau Bukom, although I saw a few on the reef flats too. 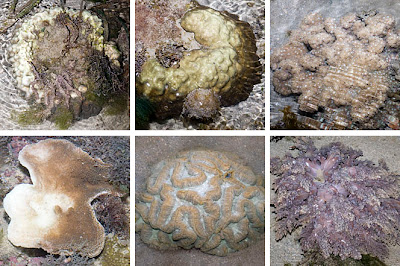 Fortunately, none of these corals I saw were bleaching. These were the first to bleach during the mass coral bleaching event in 2010: Anchor corals (Family Euphyllidae), Cauliflower corals (Pocillopora sp.). I didn't see any Crinkled sandpaper coral (Psammocora sp.) though.

Most of the corals, however, seemed alright and were their usual colourful selves. 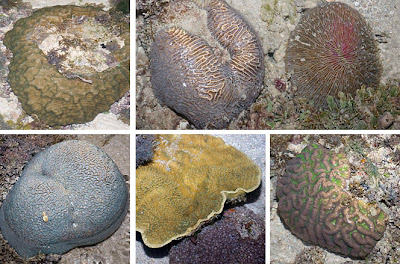 I was pleased to see some of my favourite corals: Horn corals (Hydnophora sp.), Lettuce coral (Pavona sp.) and more. Kok Sheng saw some spectacular corals as he braved the deep reef edge. The water was quite clear today! 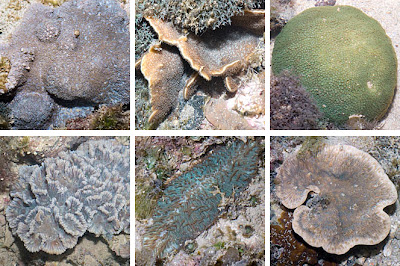 I didn't see any leathery soft corals (Family Alcyoniidae) that were bleaching. Various species all looked fine. We were able to better explore the reef flats today because the bloom of Sargassum seaweed (Sargassum sp.) is finally over.

Wow, our first time seeing a Cushion star (Culcita novaeguineae) on the intertidal at Pulau Hantu. There were also lots and lots of Common sea stars (Archaster typicus) on the sandy shores, many in 'mating' position.

Kok Sheng spotted these four baby Fluted giant clams (Tridacna squamosa). Kwan Siong spotted one more. Wow, we are so thrilled. But also sad because we couldn't find the Burrowing giant clam (Tridacna crocea) that is usually in the middle of the lagoon. Could the clam have been killed by a boat strike or boat grounding on the lagoon?
There are all kinds of animals living on seagrasses and seaweeds. The Tape seagrass (Enhalus acoroides) were all nice and long (none were 'chomped' like those on Cyrene) and many blades were covered with green gum drop ascidians and feathery hydroids. While I saw squid egg capsules attached to the seaweeds, and several squids squirted ink at me before zooming away. I didn't see any octopuses, but the rest of the team did.

At sunrise, Kwan Siong has a look at the amazing mangrove trees that have regenerated naturally on the artificial seawalls of Pulau Hantu. The trees have grown tall and look healthy. 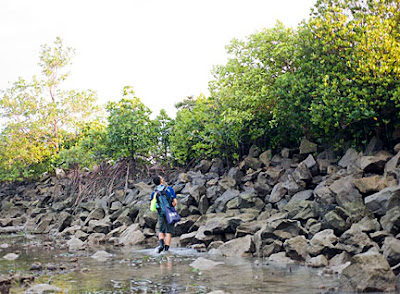 As the tide turns, we check out the blooming sponge garden near our exit point. As well as the mangrove trees growing nearby. Alas, we couldn't find any bryozoans on the trees. 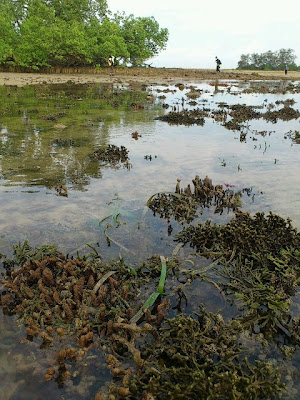 As we waited (a long time) for the boat to pick us up, we briefly met with a small group of people who had been camping on the island but only just got up at sunrise and missed the low tide. Later on, we realised there was quite a large number of them camping on the island. It's good to know that young people are taking time out to spend outdoors. 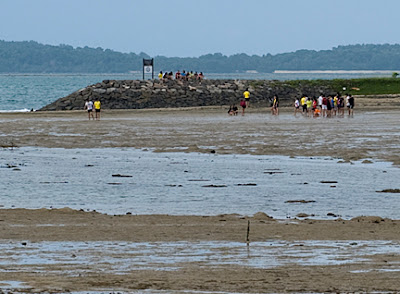 Our day started well before dawn! The lights of the petrochemical plants on Pulau Bukom are pretty in the dark from Pulau Hantu. 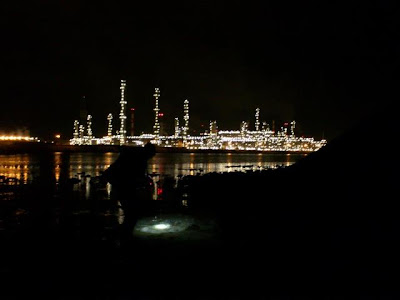 After the trip, a quick update for wildnews, I zoomed off for the NParks volunteer dialogue session with in the afternoon. Now it's time for a short nap before I wake up way too early again tomorrow for another predawn trip to Big Sisters Island.