New donut nudi on Day 1 of the Southern Expedition

The Southern Expedition explodes on St John's Island with a boatload of humungous gear! 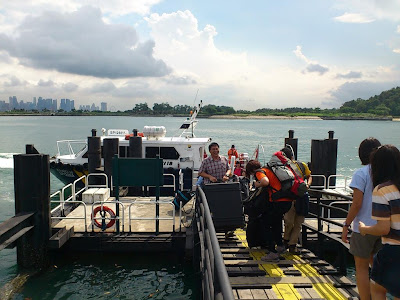 Fortunately, there's lots of enthusiastic folks to get everything sorted out.


We arrived at Base Camp and everything was so well organised! With lots of helpful signs, including the one for the 'Unisex Toilet' with some graphics to suggest the rather graphic outcomes of NOT knocking before entering. Oops. 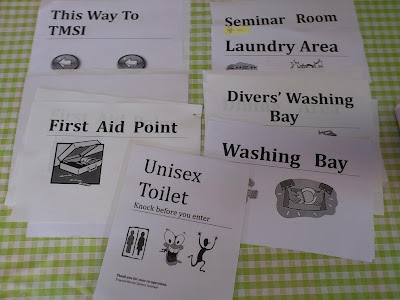 One of the Most Important Items is REAL COFFEE. Kindly arranged by Dr Joelle Lai who brought the Nesprezzo machine. The coffee is so good, that sadly, it is charged at $1 per cup. All other beverages are free!

Razali is the man we have to thank for all the wonderful arrangements at Base Camp. There's a well equipped cooking area, laundry area, all kinds of dormitory arrangements, and lots lots more. Of course with lots of help from Helen and the rest of the tireless staff. 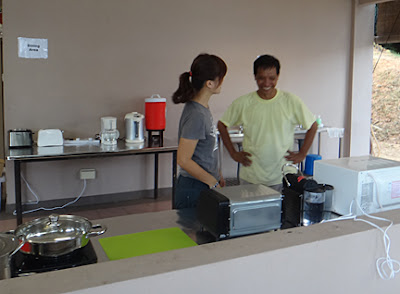 Dr Tan Heok Hui gave a briefing session covering the major programme, safety and other issues. Followed by a lively round of introductions. This is just a small part of the total expedition as many scientists have yet to arrive and none of the volunteers have yet to turn up. 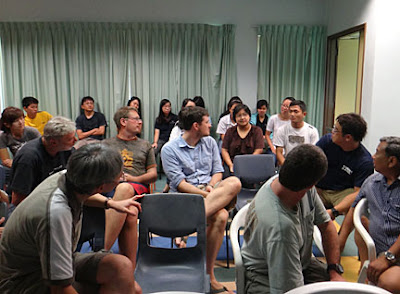 All too soon, it was time for lunch! In the midst of lunch, we heard the dredge boat had come back early. Oh dear, this probably meant that some of the equipment got damaged while dragging it on the sea bottom. 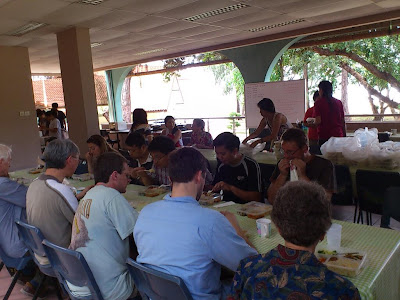 I thoroughly enjoyed my lunch! 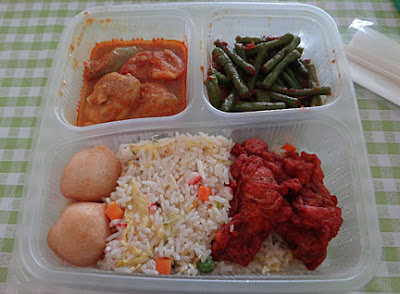 After lunch, we get right to work on the dredge. There's lots of excitement at the sorting stations as all kinds of critters are teased out. Dr Bertrand seems to be explaining some large thing that he found. 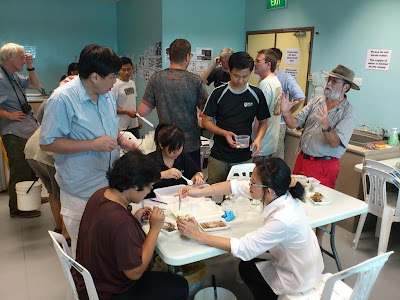 Earlier on, Yen-Ling had a briefing session with the helpers at the sorting station. 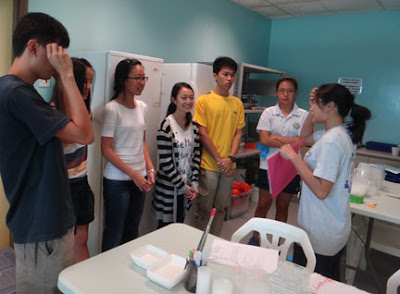 A nice addition to the sorting station are photos and pictures of various common types of animals to help those who are less familiar with our marine life. Thanks to Rene Ong for putting these charts together. 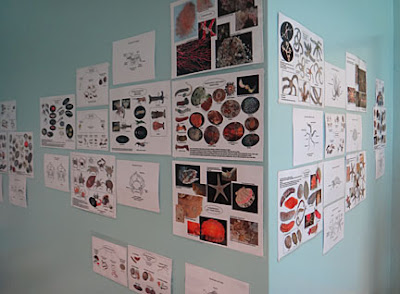 It's great to have many young sharp eyes do the sorting! 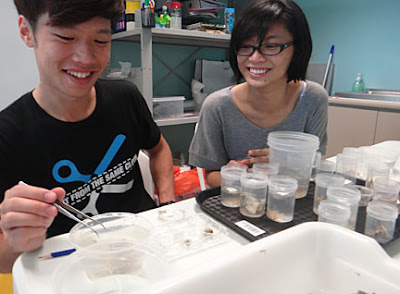 Older folks like Prof Peter have to use super special glasses to look at the teeny tiny crabs that have come up in the dredge. 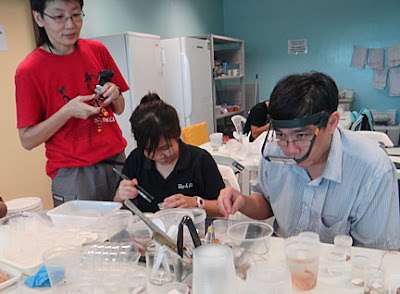 Here's a look at some of the beautiful, crazy and awesome animals found in today's dredge. 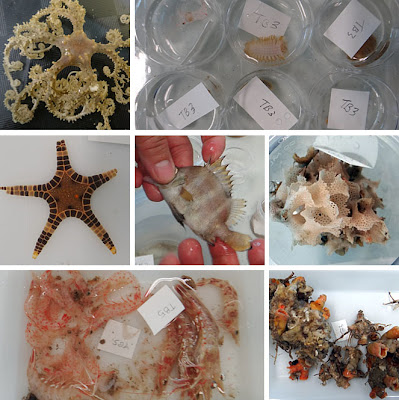 Oh dear, here's the broken beam trawl. No worries. It can be fixed. 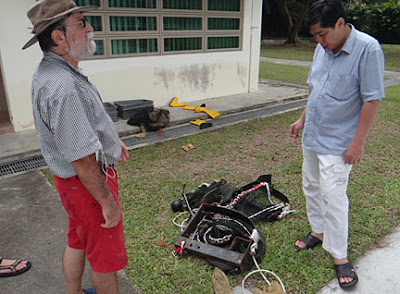 The awesome photo equipment have been set up in a special room just for taking photos of live specimens. 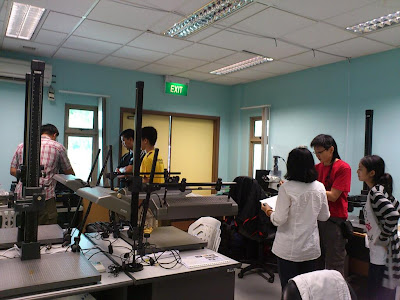 The Ladies of the Crypt are hard at work. The Cryogenic team carefully takes tissue samples and freezes them to preserve the sample for future genetic and other work. The Expedition gives them an opportunity to rapidly build a good library of our many common animals, as well as special ones. 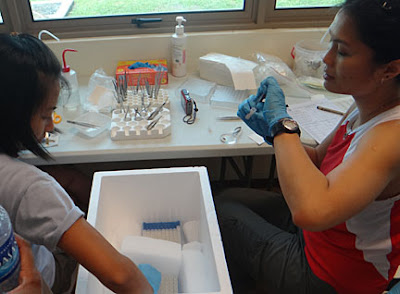 Some of the scientists have already set up their work areas within hours of arriving! 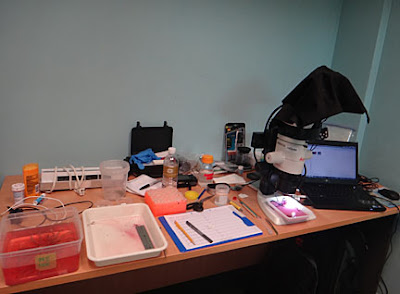 Meanwhile, out back, the scientists are patiently going through the dredged sediments! 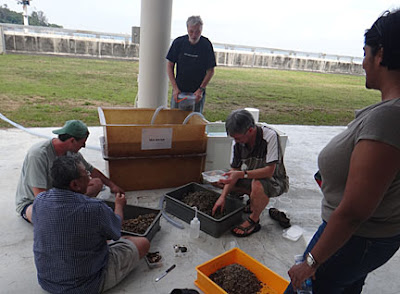 After lunch, Prof Daphne and I had a look around at the shore nearby. But we decided we should do a proper survey tomorrow with our field gear on. 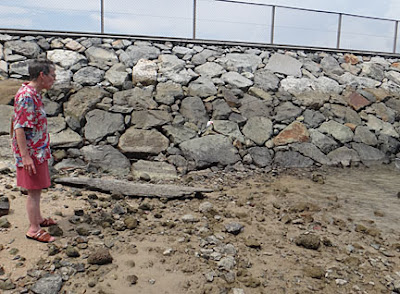 Wow, Rene announced, after confirming with Chay Hoon, that this nudibranch with 'donut' shaped things on its body is a first record for Singapore! 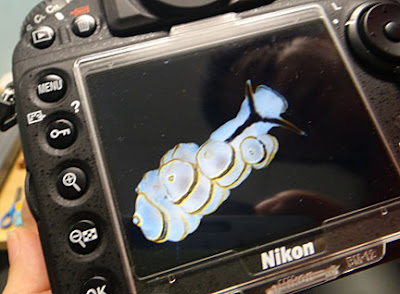 As I leave for the day, it's still daylight and I enjoy the view of the only place in the Southern Islands where we can see both the city skyline and mangrove trees! 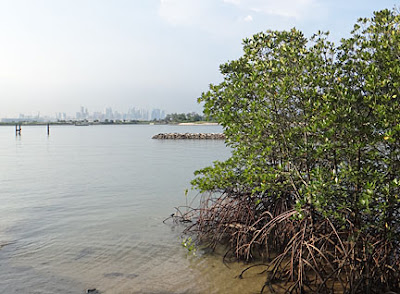 I left on the early boat so I missed dinner, which just arrived in large numbers, together with more staff and helpers. Here's Chee Kong bringing back the dinner. 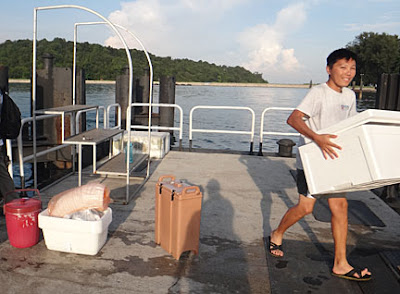 Rene kindly shared a photo of dinner.
Goodbye to the Expedition, until tomorrow! 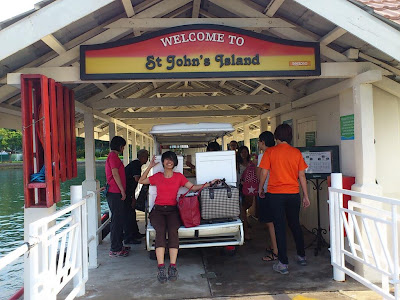 Volunteer sign up for the Southern Expedition are already closed due to limited places and early logistical arrangements needed for participation.

But no worries, you CAN still join the Survey! Lots of surveys will continue after the Expedition, just at a less frenzied rate. There will be lots of other opportunities for volunteers to participate in dredging, field surveys as well as laboratory sessions. To join the Mega Marine Survey, register your interest in this form and you'll be invited to join the mailing list to receive updates on the Survey and sign up for Survey activities.  Also check out the FAQs for more about the Survey.
Posted by Ria Tan at 11:06 PM