Dispersants applied to oil spills interfere with natural processes that degrade oil, including oil-eating bacteria. Some naturally occurring microbes act like "oil-seeking missiles" that 'eat' and break up crude oil resulting in 'self-cleaning' effects, a study of the US Gulf of Mexico oil spill found.
Dispersants are basically detergent sprayed on crude oil to break them up, like using soap on greasy dishes. When the oil is dispersed into tinier bits, we don't see them but the oil is still there. The study found that this oil-dispersant mixture is 52 times more toxic to bacteria than just the oil alone or dispersant alone.


The study also found that dispersants interfered with other natural processes that degrade oil, such as effects from sunlight and ground-level ozone. Dispersants also caused sediments to absorb more of the harmful compounds, lengthening their effects on the environment.
More about the Gulf Oil spill study on BBC News and wildsingapore news.

The Gulf Oil spill happened around the same time as the massive oil spill at Singapore's east coast in May 2010. Large amounts of dispersants were used in our oil spill. 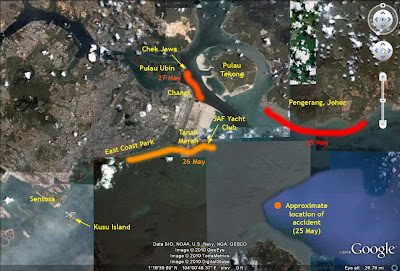 So far, I have not come across any public report on what caused the Singapore May 2010 oil spill and the environmental impact of the spill.

Email ThisBlogThis!Share to TwitterShare to FacebookShare to Pinterest
Labels: issues-oil-spill