Return to the Lost Coast

The Lost Coast is a remote shore in Singapore that is seldom visited. Travis introduced us to this marvelous place, trekking kilometers - a Death March! Since then, we've found an easy way to visit; Alex and his crew takes us there by sea! 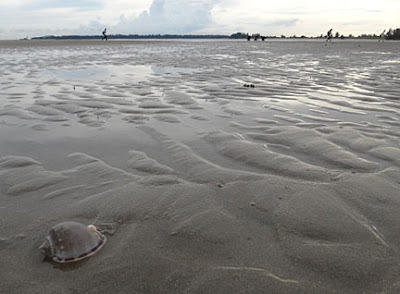 Here, animals that are rare elsewhere in Singapore are abundant. Like this large Grey bonnet snail (Phalium glaucum). There were so many of them that I simply had to ignore them in order to look at the rest of the marine life.

One of the most intriguing finds for me were several of these coils of what seem to be egg capsules. I have never seen anything like it and I have no idea who the mama is. Probably some kind of snail and probably a large one too as the capsules were quite big. 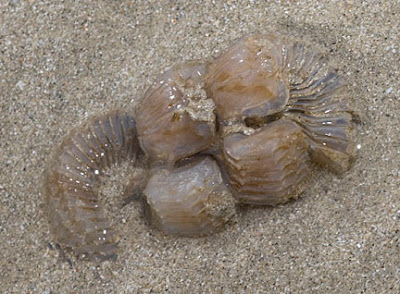 On this trip, we saw lots and lots of Fig snails (Ficus variegata). Many more than on our trip here in Oct 2011 and Nov 2011. These snails are quite lively and I came across many that were 'standing up' on the sand. I'm not sure what is going on, possibly they were pushing into the sand with their large foot? 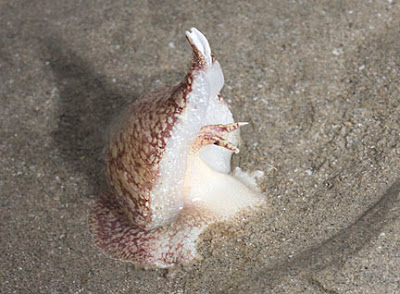 The Fig snails seemed to be 'leaping' out of the sand. I came across many that were quite some distance from a hole in the sand from which they probably emerged. 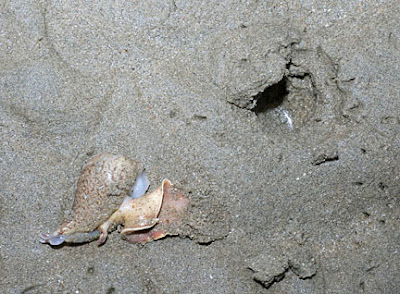 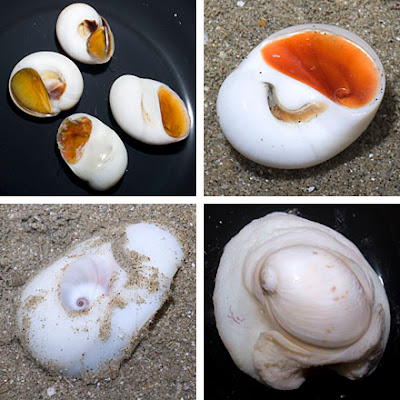 I also came across a humungous moon snail that I've only seen at the Lost Coast. It looks like a Ball moon snail but it is much much bigger. The body is very brown and it has a lovely operculum that has a transparent edge! Wow. 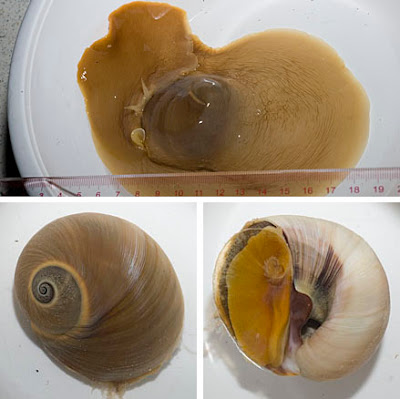 Also abundant on this shore were Olive snails (Family Olividae). 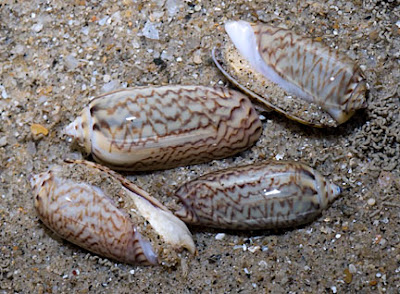 Olive snails are really hard to tell apart. So we will have to rely on the experts to help us. 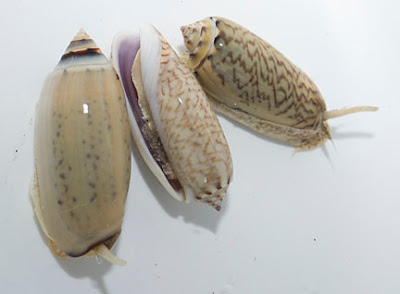 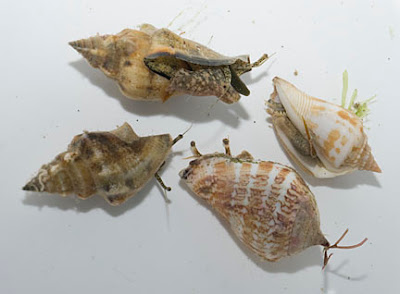 A nice surprise to see this Moon-headed sidegill slug (Euselenops luniceps). This cartoonish slug is not a nudibranch. It is adapted for living in a sandy habitat. A broad foot and flattened body for crawling over sand or burrowing underneath. A long siphon on its back which brings fresh seawater into its gills while it is buried in the sand. With the incoming seawater the animal can also sense chemical released by potential prey nearby. It has a large oral veil fringed with lots of sensory 'hairs' on the underside to detect prey. The slug can swim for some distance by flapping the sides of its body. 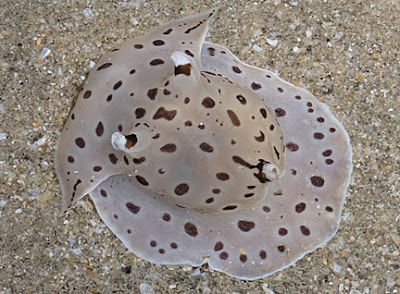 The way to find buried animals in the sand is to look at marks on the sand. Here's strange markings that I've not seen before. Gently scraping away the sand, I discovered a Ghost crab (Ocypode ceratophthalmus) buried in the sand! 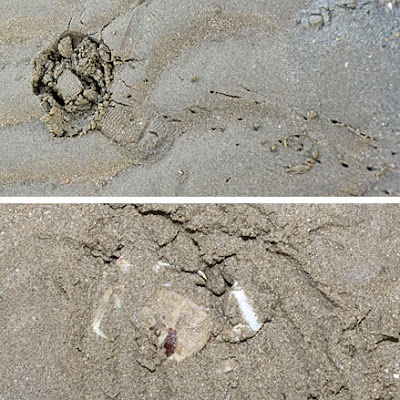 Marcus found a small octopus stranded on the sand. We are careful not to touch it in case it's a Blue ringed octopus, which has been recorded for Singapore and whose bite is fatal. But we didn't see any blue rings. 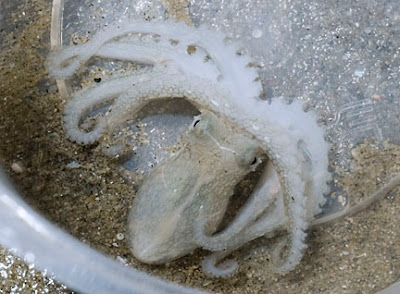 This sea star looks quite ordinary from above but it was bright orange underneath! Kok Sheng reminds me that we've seen a similar Sand star (Astropecten sp.) on our previous trip here.

Kok Sheng found a pretty sand dollar with slots that was pink! It looks different from the Keyhole sand dollar (Echinodiscus truncatus) that we see elsewhere. On the underside, there was a strange thing poking out. A tiny parasite?

The most amazing find was of course made by Chay Hoon. She found many of these super well camouflaged slugs among seaweeds. Can you spot it? 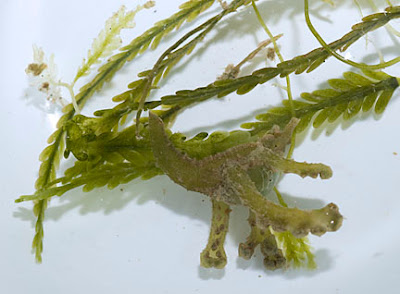 This is what it looks like when it's startled. It opens up its appendages, revealing colourfully marked tabs. It also produces a lot of slime. I'm sure there is some sort of defensive stuff going on to deter small predators from taking a nibble on it. It looks a bit like but also different from the Tendril slug (Lobiger viridis) that she found many years ago. 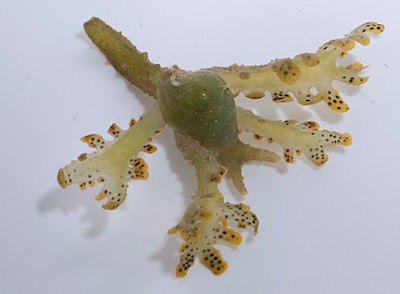 Singapore has lost most of its natural sandy shores. Ironically, this artificial reclaimed shore is among the last vast sandy habitats and is home to animals that are rarely seen elsewhere. 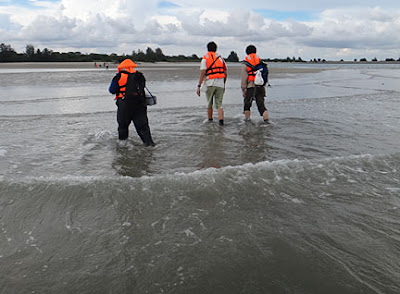 We had great weather for the wet season! And it was good to see that the shore is still doing well. The only missing piece is Travis, who was tied up with work and unable to join us. Well, hopefully next year!

Tomorrow, TeamSeagrass heads to Cyrene to do our regular monitoring there.