Today, Shell arranged to brief a few of us on their plans to replace the SBM pipeline which would involved dredging and other major works. 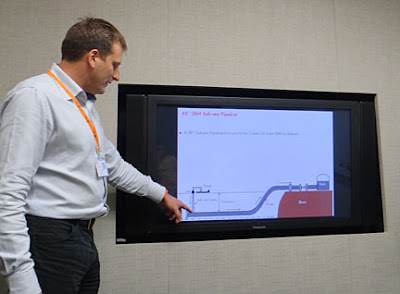 Ramon Martinez, who is leading the project, gave a friendly and very detailed briefing of the project.


What is an SBM pipeline? It is a single buoy mooring (SBM) pipeline that transfers fluids between a tanker and another facility. They are capable of handling even very large crude carriers (VLCC) (from wikipedia). Here's a photo of a VLCC and a yellow SBM.
There is a 5km long SBM pipeline that runs from Pulau Bukom to an area just off Pulau Sebarok which allows VLCCs to transfer crude to the refineries on Bukom. VLCCs are just too large to approach closer to Pulau Bukom. The pipeline is more than 30 years old and some parts of it have to be replaced. Here's an earlier post of repairs to the SBM in 2009.
Here's a more detailed look at the area from an MPA circular on the restricted area around Pulau Bukom and the SBM area and Pulau Sebarok.
Basically, Shell plans to remove and replace a 2km portion of the SBM pipeline (in red) that leads from the SBM off Pulau Sebarok to Pulau Bukom. The important shores nearby include Terumbu Semakau and Pulau Jong. Terumbu Bukom which we visited once is also nearby. As dredging is involved to prepare the ground for the pipeline, sediment plumes may form and other important shores that might be affected include Pulau Hantu, the Sisters Islands and Raffles Lighthouse. More about what is sedimentation and why does it matter.
Here's a look at the rich reefs of Pulau Jong. Shell's pipeline work will be taking place in the channel between Pulau Jong and the Semakau Landfill on the horizon in this photo. More posts about our trips to Pulau Jong, and more photos of marine life on Pulau Jong. 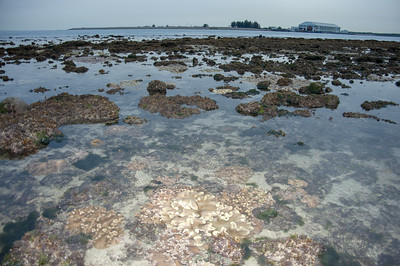 Terumbu Semakau has among the best seagrasses and good coral reefs of our submerged reefs. Here's a view of the reefy shore on one of our sunrise trips this year, facing the Semakau Landfill and Pulau Jong on the horizon. 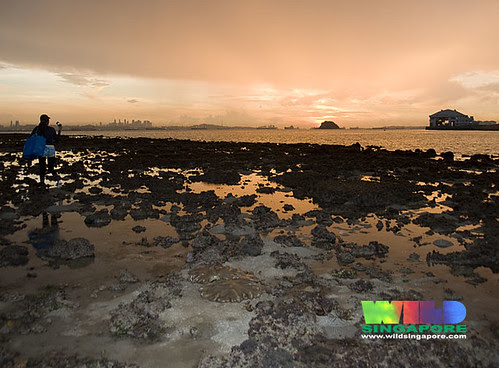 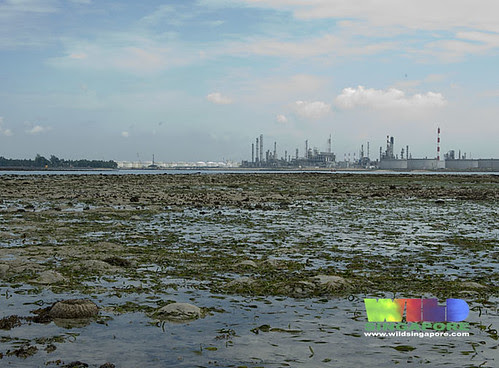 The new pipes will be laid according to MPA guidelines which include an 'armour' of rocks to prevent accidental damage. To prepare the area, dredging will be done by the Queen of the Netherlands which is so famous it has its own wikipedia page. Shell says it is a "state of the art Trailer-Suction-Hopper dredger" and will do a good clean job of it. More about what a Trailing-Suction-Hopper dredge does. The dredging will take place from Sep to Dec 2012.
DHI has been engaged to do the environmental study and this is their report on the sediment plume impact from the dredging. In addition, they will set up monitors that will constantly measure the spill rate and if the sediment levels are excessive, the dredging will stop. Shell says the limits are set with corals in mind, because DHI believes seagrasses are more tolerant of sedimentation than corals are. Shell says MPA, NEA and NParks were consulted on this project too. 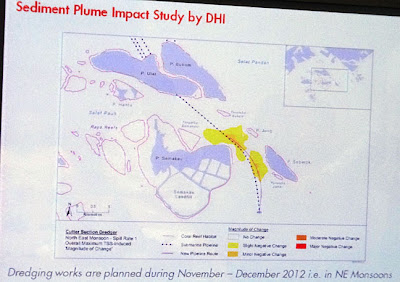 Shell also shared how the pipes will be cleaned. Among others, this involves two 'PIG's (pipeline insertion gauges) in a process called 'pigging', more on wikipedia. 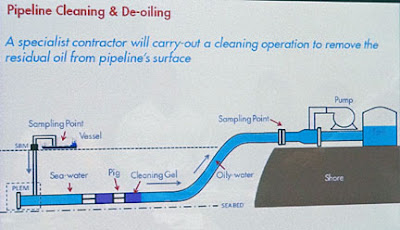 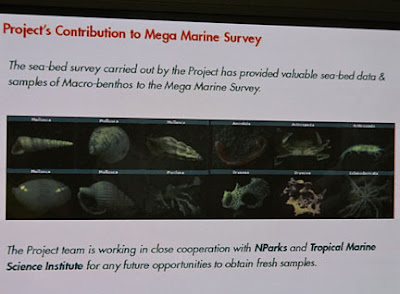 Also attending this briefing were Debby Ng of the Hantu Bloggers, and Jackie and Ricky from the Singapore Underwater Federation.

Ramon asked and we shared about recent dolphin sightings in the work area, like this sighting of a family of dolphins by Goh Pei Hao in 2011. More about dolphins in Singapore. 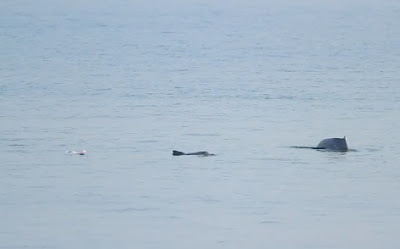 Ramon said a dugong was sighted by the project during preliminary work. Wow! He said they did report the sighting to SWiMMS. He asked about dugongs in the area and we shared about dugong feeding trails seen in May 2012 at Terumbu Pempang Laut quite close to Pulau Bukom. Kok Sheng also saw dugong feeding trails at Pulau Semakau in 2011. More about dugongs in Singapore.
I'm glad to have had the opportunity to speak with Ramon, who invited us to provide him any feedback and observations on impact of work on the shores nearby.

Debby and I also offered to give talks to Shell about the marine life found near Pulau Bukom and elsewhere. And to bring Shell on dives at Pulau Hantu or for an intertidal trip on the nearby shores.
Cyrene Reef, which lies in the middle of the industrial triangle is particularly amazing! I have brought some Shell volunteers there and will be glad to introduce more Shell staff to Cyrene. 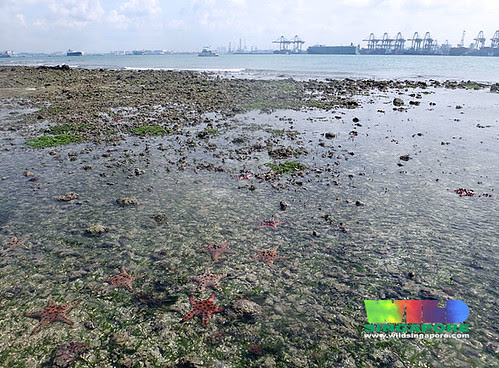 We hope Shell will take up our invitation to help them discover the amazing marine biodiversity in Singapore, despite the many industrial uses and coastal developments that are taking place.

Update: Lau Jue Hua, the intern at Shell who sat in for the briefing has just signed up for the Mega Marine Survey and shared that he was keen to see our shores first hand. Bravo!
Posted by Ria Tan at 9:45 PM