"Less than 60 metric tonnes of bunker fuel was spilled" in a collision between two bulk carriers, with "the area of spill concentrated within about 700 metres east of Sultan Shoal" it was reported in the media. 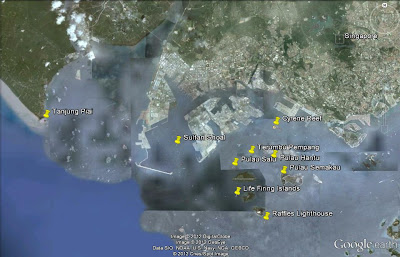 Shores that lie east of the spill the site include the pristine islands and submerged reefs of the Live Firing Area, Raffles Lighthouse. Further away are Pulau Hantu and the submerged reefs nearby.

Sultan Shoal is the location of the Sultan Shoal Lighthouse. As with all our shores, there are some corals growing on the seawalls here, as well as fishes and other marine life. Here's more about it from one of my visits there in 2011. 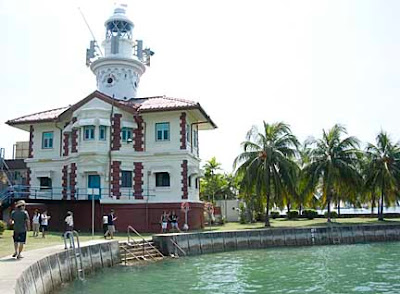 The eastern marine habitats that are probably closest to the spill are Pulau Salu, and the pristine islands which lie within the military Live Firing Zone: Pulau Senang, Pulau Pawai and Pulau Sudong.

As well as Raffles Lighthouse, which as among the best reefs in Singapore.
On the western side of this spill at Sultan Shoal are the Ramsar wetland sites in Johor such as Tanjung Piai. Sadly Tanjung Piai had recently been affected by oil spills too.

Another collision in Jan 2012 led to a spill of 5 metric tonnes of marine fuel oil near Pulau Pawai and Pulau Senang.

The largest recent oil spill was in May 2010 which led to a spill of 2,000 tonnes of crude oil. This massive spill affected vast swathes of shores in eastern Singapore and in Johor. More about this spill on this facebook page. I have yet to come across public accounts of the cause of this accident and lessons learnt or efforts made to avoid similar incidents.

Update on 11 Sep from media articles:

MPA says there are no further leaks of fuel from the liquefied petroleum gas (LPG) carrier but as a precautionary measure, an oil boom has been deployed around the vessel. The clean-up of nearly 60 tonne oil spill is continuing using ' biodegradable oil dispersants'. patches of treated oil were seen at reclamation sites on the western part of Jurong Island and Tuas View Extension, and at a rock bund in Sultan Shoal.

Meanwhile, the Indonesian Navy has readied several of its vessels to monitor dispatching nine warships and scores of patrol ships to the Indonesia-Singapore border to monitor the spill’s movement. A member of the Indonesian Fishermen Association in Riau Islands, A Nasution, said that the oil spill would definitely spell trouble for local fishermen because they must go further out to sea for fishing. He said that the oil spill would keep fish from approaching the seashore.

Update on 12 Sep from media articles:

MPA said waters in the affected area were generally clean with only patches of sheen sighted near the Jurong Island T-bund and Tuas View Extension. The rock bund and lagoon cleaning up operation at Sultan Shoal Island was completed. Sea-based clean up operation will continue, as will its work with JTC Corporation and the National Environment Agency on the land-based clean up.

Update on 13 Sep from media reports:

MPA said as of 1800 hrs 12 Sep 2012, no oil patches have been observed in the affected waters. The shoreline clean up operation along Jurong Island's T-bund and along Tuas View Extension has also been completed. Most of the shoreline has been cleaned, with only small light stains left. MPA will continue to monitor our waters closely and carry out any necessary clean up. MPA's patrol and emergency response craft remain deployed at the West Jurong area to deal with any oil patches that may surface. A total of 14 craft, 2 containment booms, oil recovery equipment such as a harbour buster, and more than 100 personnel were deployed for the clean-up efforts at sea and land.
Posted by Ria Tan at 9:39 AM