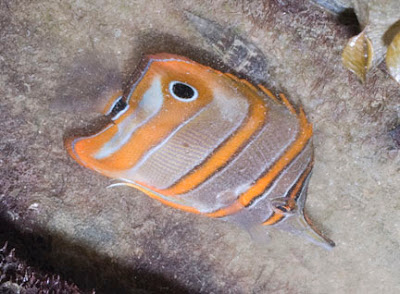 This is my first morning trip to Tanah Merah for 2012 and as usual, the fishes are much livelier in the dark. Also checked out the seagrasses and corals and most seem to be doing well.

I saw this large fish stranded in a pool of water. I didn't dare come too close to it as it trashed about a fair bit.I think it's some kind of Needlefish (Family Belonidae). 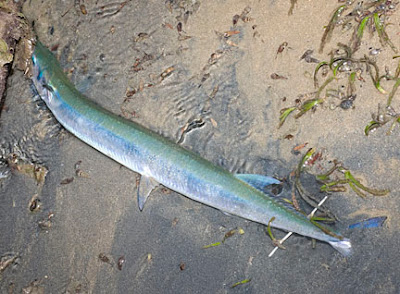 I only managed to spot one grouper: the Chocolate hind (Cephalopolis boenak). I didn't see any moray eels today. 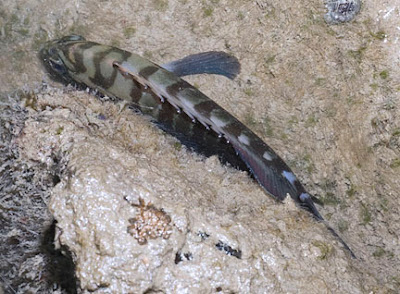 There were plenty of filefishes (Family Monacanthidae), although they are hard to spot as they can change their colours to match their surroundings and often position themselves so they look very unfish-like. 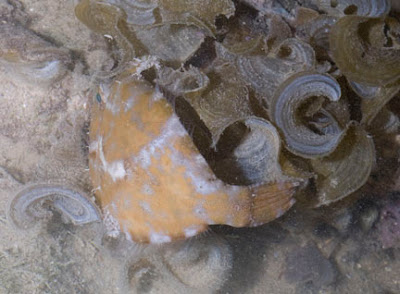 There are lots of gobies (Family Gobiidae) of all kinds. The large long one is probably the Crocodile flathead (Psammogobius biocellatus). 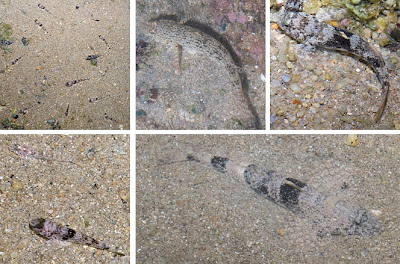 As well as many colourful little fishes. Today, there were lots of the little blue fishes probably young damselfishes (Family Pomacentridae). There were also lots of cardinalfishes (Family Apogonidae). 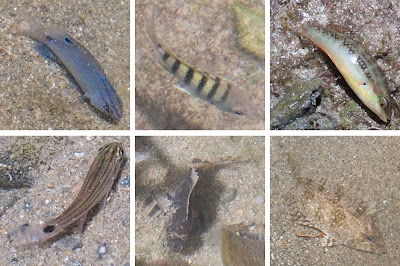 Tanah Merah has an abudance of Stonefishes! This is why we need to be very careful when walking on the shore. Today, I only spotted one of these Hollow-cheeked stonefish (Synanceia horrida). Can you see him? There were probably more, but I just didn't see them. 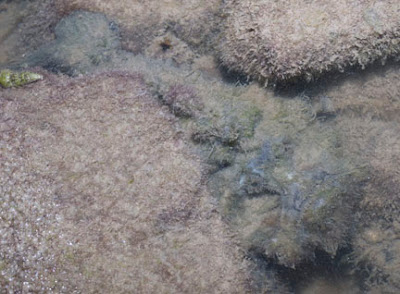 How nice to see some medium-sized mushroom corals (Family Fungiidae)! When small, these hard corals grow attached to a hard surface on a little stalk, and thus resemble mushrooms. As they get older, they break off and live unattached on the sea bottom. 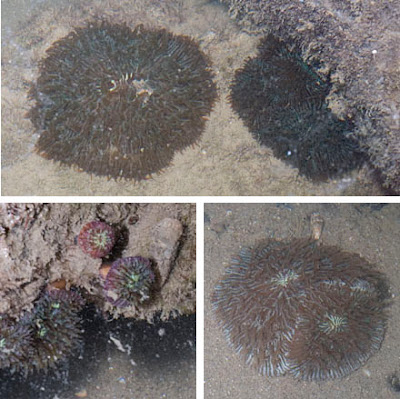 Some large coral colonies grow on the artificial seawall. Most of them seem to be doing well. 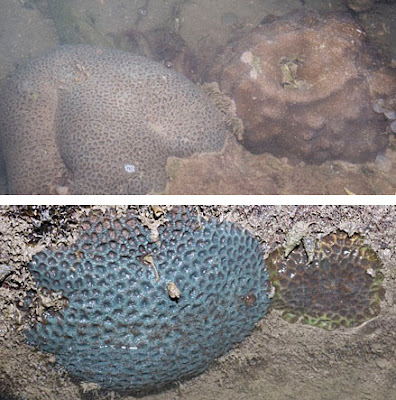 As usual, the most abundant hard corals here are Favid corals (Family Faviidae). None of them were bleaching. 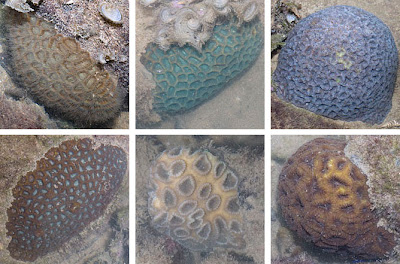 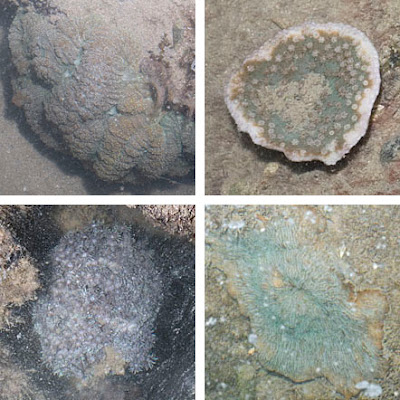 At first I thought this was just another cerianthid or peacock anemone. But when I got home and took a closer look, I realise it's probably a true sea anemone! 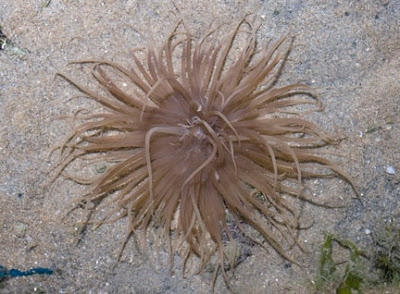 The animals doesn't have an inner ring of short tentacles that cerianthids have. And the tentacles have lots of little spot. I haven't seen a sea anemone like this before. 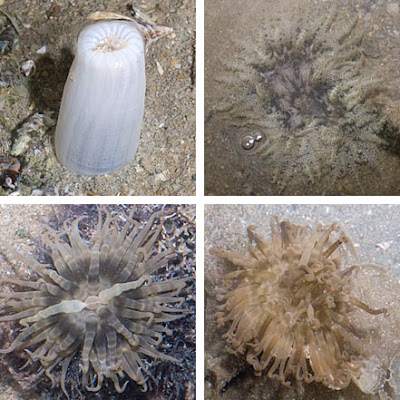 I saw several large swimming crabs that were coated in a carpet of living seaweeds. Usually, this means the crabs are not healthy and probably infested with parasites. This is not an uncommon sight on shores like Changi. So I don't think it's something to be too worried about. 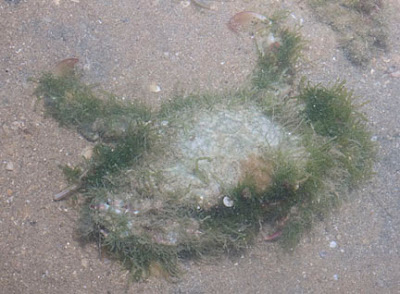 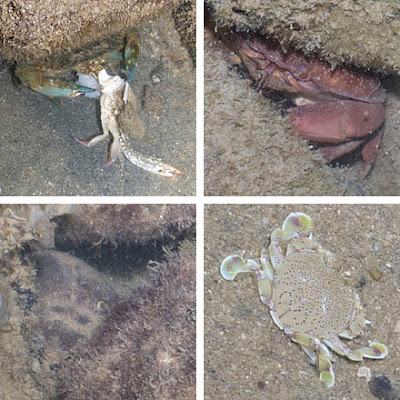 I saw a Saron shrimp (Family Hippolytidae. It's bright blue at first. But it seems that the shrimp can change its colours to match its surroundings! This same shrimp turned a dull brown among brown seaweeds.

Here's a closer look at the pretty Saron shrimp. 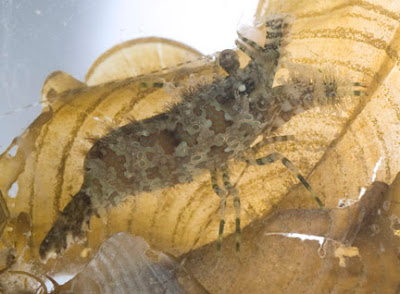 Today, I noticed several Firebrand murex (Chicoreus torrefactus) each 'clutching' a small snail, probably eating them? Most of them were eating Bazillion snails (Batillaria zonalis) which remain abundant on the shore. One was eating another kind of snail. I saw lots of sand collars, but I didn't see a single living moon snail (Family Naticidae) which create these egg masses. 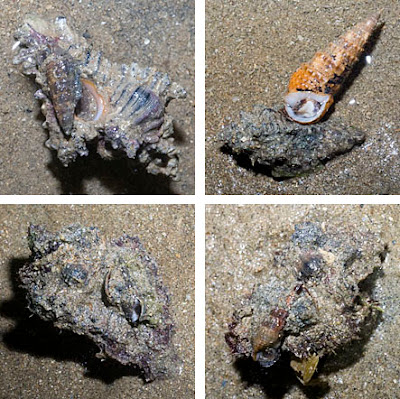 These little blue blobs are ascidians. I saw quite a few patches of them today. I don't remember seeing so many of them recently. 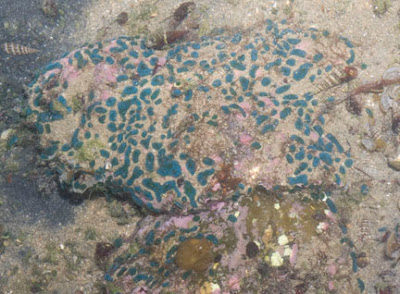 Hurray! I saw some small patches of Spoon seagrass (Halophila ovalis), for the first time in more than two years! The small patch of Sickle seagrass (Thalassia hemprichii) seems to be doing well. 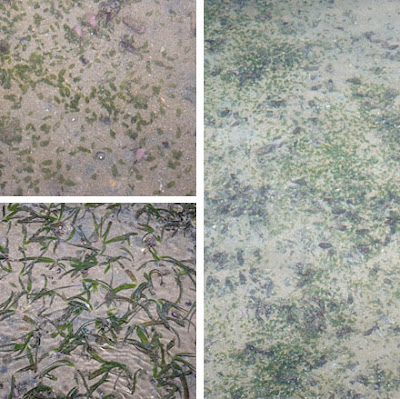 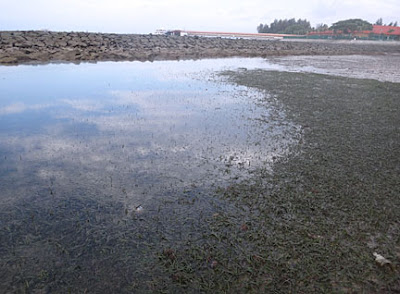 The Haddon's carpet anemones (Stichodactyla haddoni) that dot the Ribbon seagrass patches are still there and doing well. Some of them had a Five-spot anemone shrimp (Periclimenes brevicarpalis). In one of them, I saw an anemone shrimp.

The big patch of Tape seagrass (Enhalus acoroides) seems to be bleaching, but its leaf blades remain long. Today I saw four other small clumps of Tape seagrasses. Are the seagrasses growing back in the lagoon? I hope so! 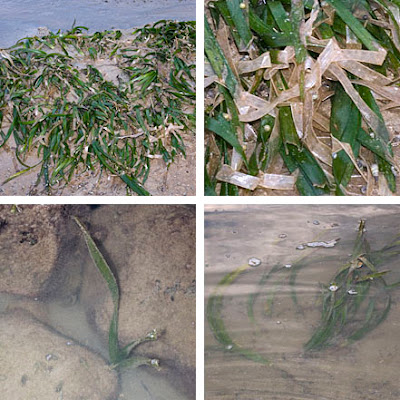 How nice to see several large patches of sea grape green seaweeds (Caulerpa racemosa)! These seaweeds are eaten by slugs and other marine life, so a return of seaweeds hopefully means a return of more of our favourite sea creatures. There wsome long strands of Sargassum seaweed (Sargassum sp.) and lots of Mermaid's fan (Padina sp.). 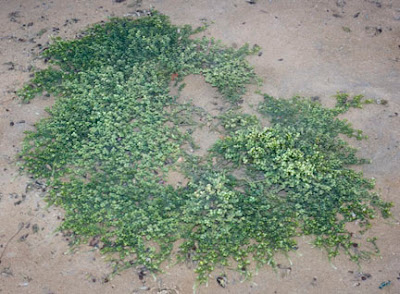 Today I saw a lot more Acorn worms (Class Enteropneusta) than usual. And most had large piles of relatively clean 'processed' coils of sand. There were also many signs of burrowing Sand bubbler crabs (Scopimera sp.). 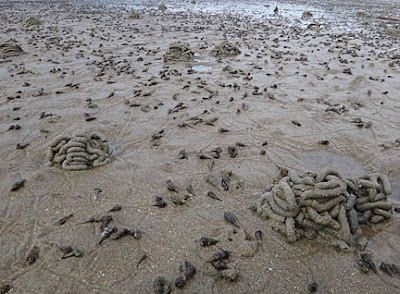 There were many fanworms, Thumbs up sea squirts (Polycarpa sp.), Today, I didn't see any special hermit crabs and missed spotting any Common sea stars (Archaster typicus). On some parts of the shore, crude oil was still seen under a thin layer of sand. And a sheen of sandy oil gathers over corals growing on the seawalls. 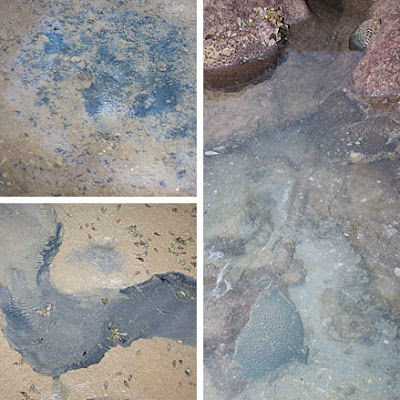 There is still a sheen of oil on many parts of the shore. 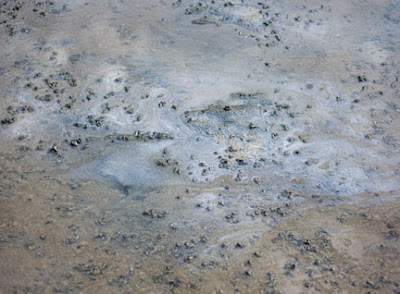 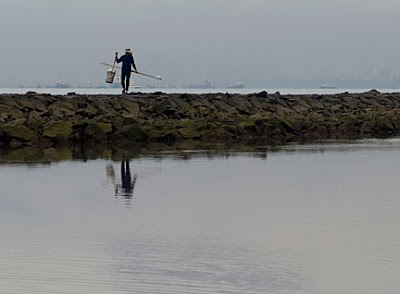 Litter continues to be found here and on our other shores. This can was floating near some young corals. There's a sprinkling of litter on the high shore. Fortunately, this will be taken care of during the International Coastal Cleanup Singapore's Earth Day clean up this coming Saturday. More details. Bravo for ICCS! 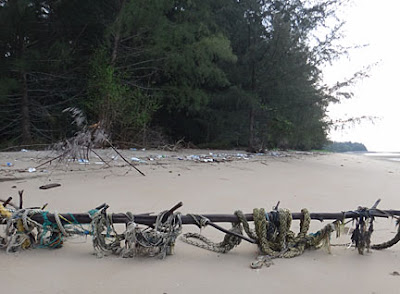 It sure was a lovely sunrise this morning! My last trip here was in February, and I'm glad that the shore seems alright. Tomorrow, I'm hoping to check out the rest of this long Tanah Merah shore. 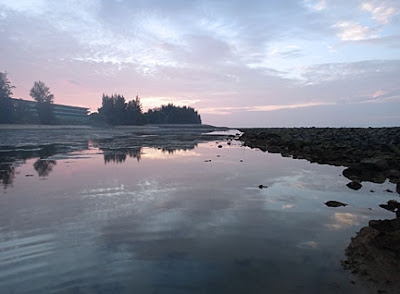 More about the oil spill on this blog and on the Oil spill facebook page.
Posted by Ria Tan at 10:21 PM