There are indeed lots of dead fishes along the banks of Sungei Tampines. 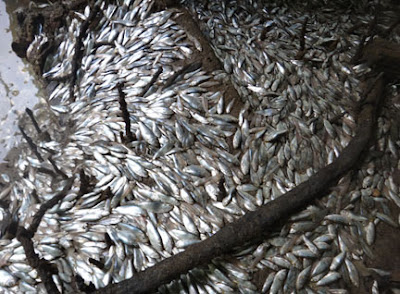 Media articles reported thousands of 5cm long dead fishes washed up along Sungei Tampines on 29 Mar, from Pasir Ris Drive 3 to the river mouth. I had a quick look this afternoon.


I started upstream where the Sungei is canalised, running under the busy Pasir Ris Drive 3. 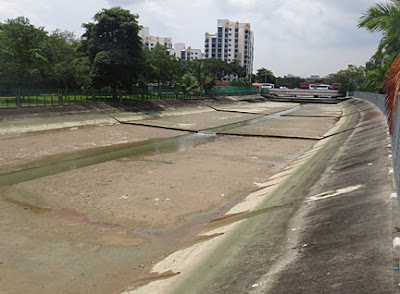 The canal gives way to a natural stream edged by the Pasir Ris mangroves. The eastern bank can be reached via the boardwalk that runs through this mangrove forest. I started checking along the western bank, popping in twice and found only a sprinkling of a few small dead fishes. 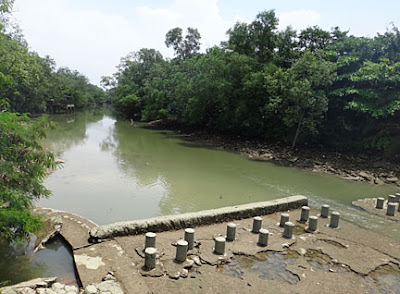 When I reached the bridge near the mouth of Sungei Tampines, I noticed a layer of small dead fishes along both banks, stretching about 10m on either side of the bridge. Here's a look at the western bank. 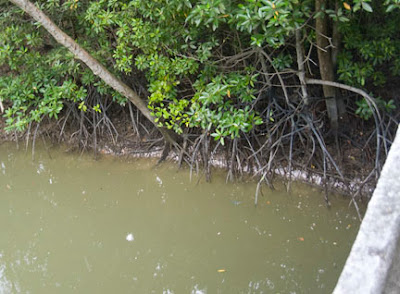 And a closer look at the accumulation of fishes. 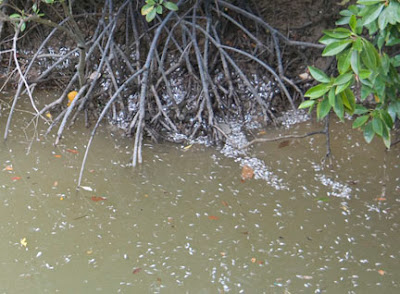 Also the western bank on the side of the bridge closer to the sea. 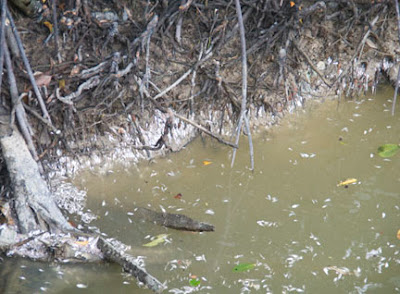 Besides the layer of dead fishes on the banks, there were also dead fishes floating in the water. 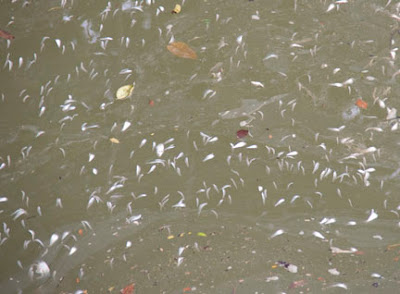 A closer look at the floating dead fishes. 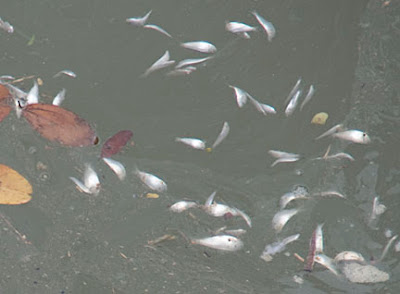 Here's a look at the eastern bank. 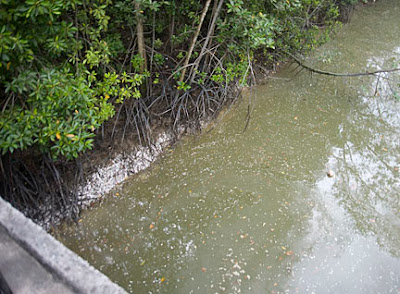 I got down to the water edge on the eastern bank to have a look at the accumulation. There's a thick layer of dead fishes all along the bank. Under the bridge. 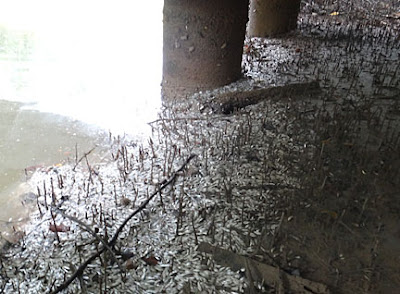 Also under the bridge. 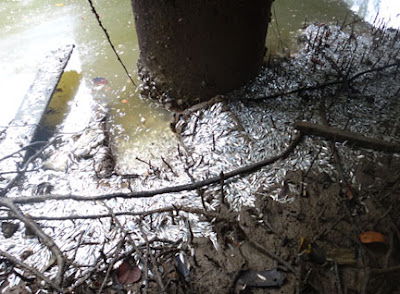 Beside the bridge among the mangrove roots. 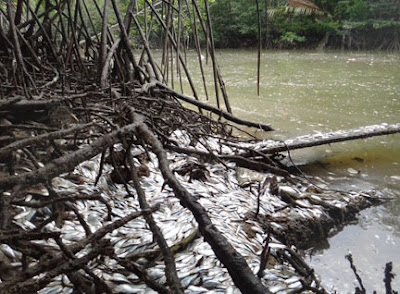 The fishes on the bank seemed freshly dead and didn't smell very bad. 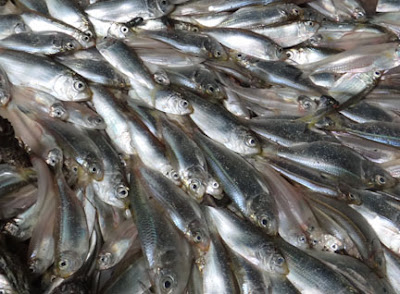 There were sprinklings of dead fishes on the mid-water mark. They were more smelly. 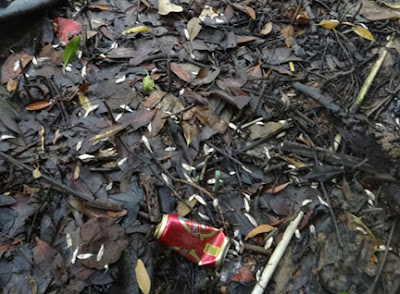 More sprinkles of dead fishes on the mid-water mark. 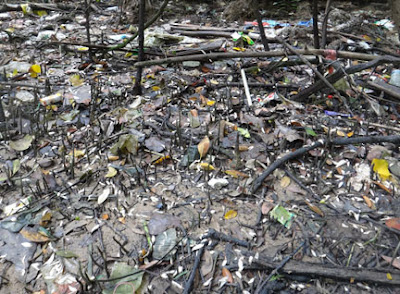 These fishes were not all small. Some were much larger. But they did all seem to be similar. 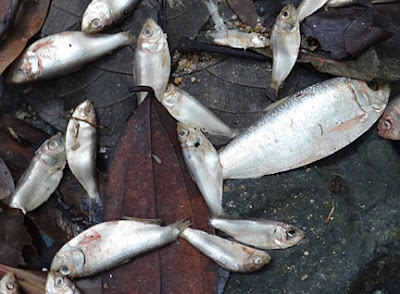 Here's a slideshow of photos of the dead fishes

I collected a few of the fishes so that the experts can have a closer look at them. 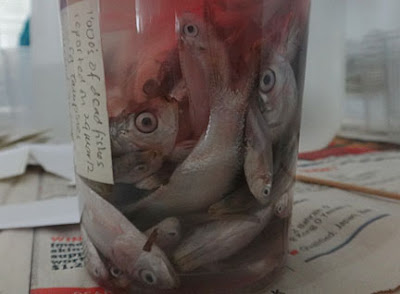 At the mouth of Sungei Tampines, I noticed there is a difference in the colour of the water of the stream (bluish-green) and the water in the sea (brownish). 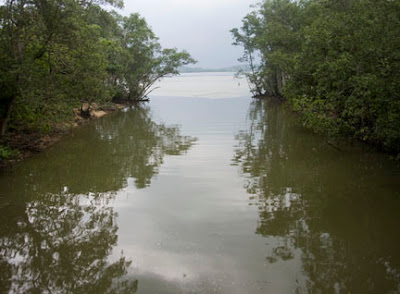 But this could just be an artifact of reflections. 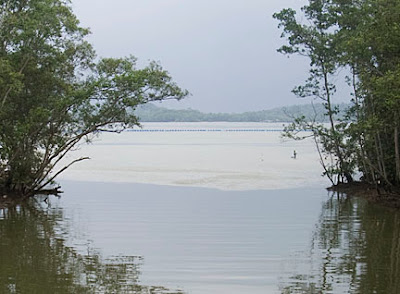 In the distance, a man was fishing with a cast net. One article about yesterday's incident quoted "Mr Eric Lim, who has been living in the estate for 14 years and fishes regularly at Pasir Ris River, said that he has seen net casters who "fish at the beach and throwing anchovies and tambans back into the water. Since this is the second time that this has happened, the authorities should pay more attention to the net casters," he felt. 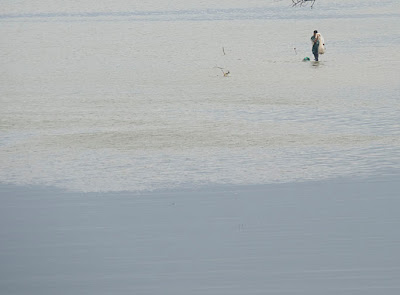 I went down to the beach to see if there were any dead fishes there. Along the way, I noticed for the first time this large outfall from a large covered drain that also opens at the mouth of Sungei Tampines. 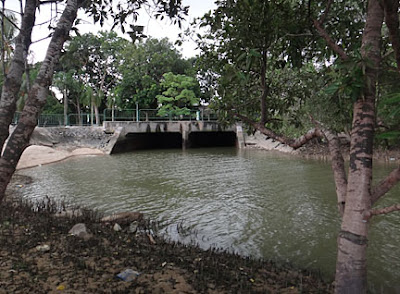 Alas, as usual, lots of litter wash up on this shore. In the distance is a large shipyard at Loyang. And a storm is brewing! 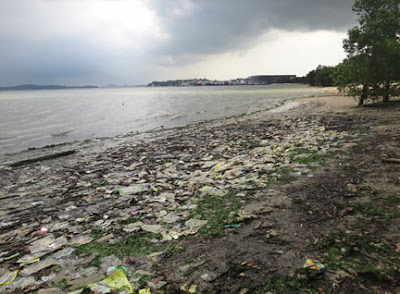 At the beach, I didn't see many of the small dead fishes in the short stretch that I covered at a rather high tide. The fishes I saw seemed similar to the dead fishes upstream.

There were plenty of mudskippers on the shore, very much alive. 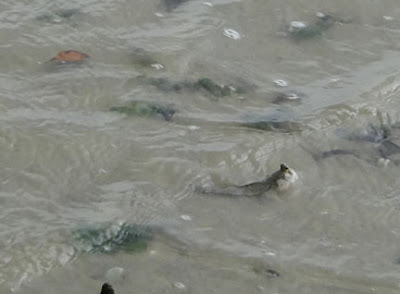 There were also lots of signs of living crabs on the sandy shore. The tide was not low and was rising. And rain and serious lightning started, so I had to hurry to shelter. 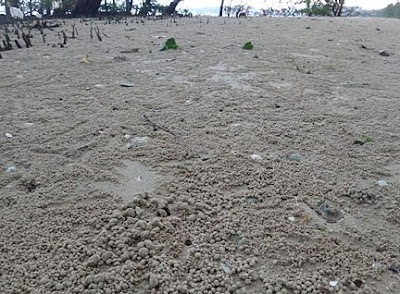 Here's a map of the area. The portion I surveyed is in blue. 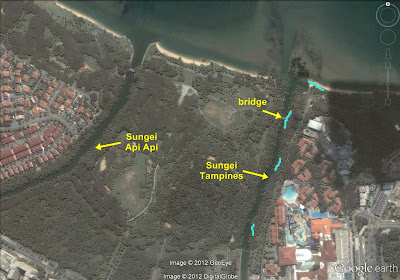 According to the media "In a joint statement yesterday evening, the PUB assured the public that yesterday's incident had no impact on drinking water quality. The NEA is also investigating the cause of the incident." There was a similar incident at Sungei Api Api on 20 Mar.

During this trip, I also saw hugging monitor lizards and other interesting wildlife.
Posted by Ria Tan at 8:20 PM