Back to the stunning reefs of Sentosa, Serapong

A special predawn trip to have a closer look at the amazing Serapong reef. 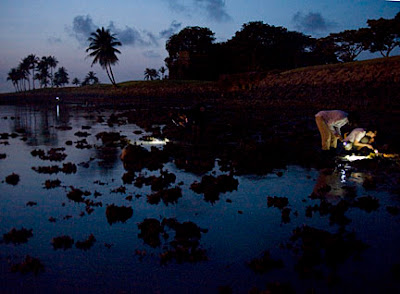 Thanks to the kind arrangements by Shao Wei, Xi Lin, Sheila and Sylvester who came at 5.30am for this predawn low spring tide! The ladies very sportingly decided to come along with us.

Sentosa had kindly arranged for me to visit in May. The tide was rather high then but I got a glimpse of a really exciting shore. A large team returned today during a lower tide and at night. We hope to see more of this shore! Kok Sheng found a red feather star (Class Crinoidea) almost as soon as we stepped on the shore! 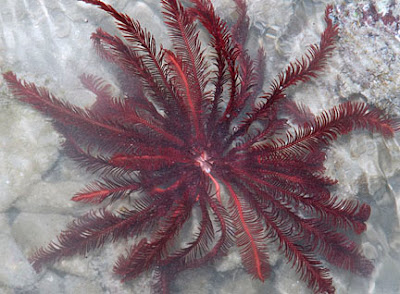 Later on, we realised there were lots of these red feathers everywhere in the reef! Perched on all kinds of hard corals and sponges! 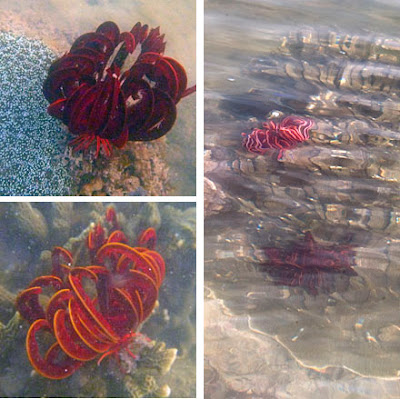 On this shore, hard corals are not only numerous but also packed closely to one another in some parts. In this photo, we can also see just how low the tide is today. At the usual tide (see the dark area on the seawall?), the murky waters hide this underwater garden! 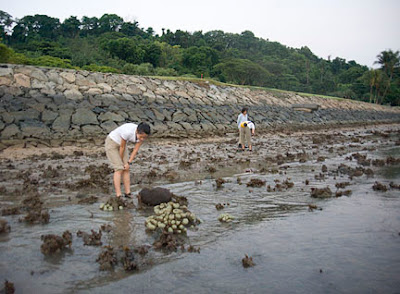 Here's a glimpse of some of the many clusters of different kinds of colourful hard and soft corals growing near one another. 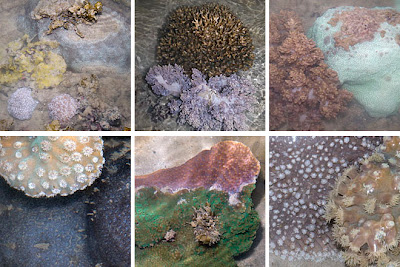 There were many different kinds of Favid corals (Family Faviidae). 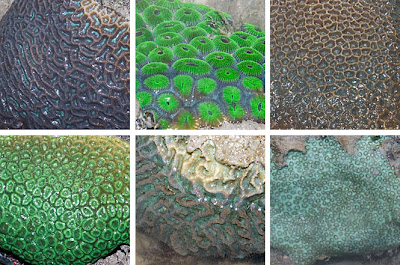 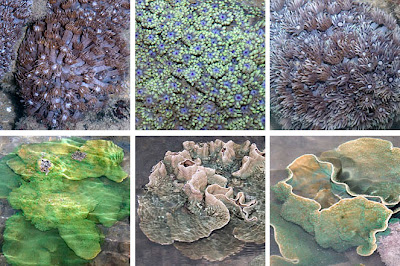 I saw many small to medium sized Cauliflower corals (Pocillopora sp.) and some large Sandpaper coral (Psammocora sp.). All those I saw seemed unbleached. This is great as these two species were badly affected during the coral bleaching last year.

It was nice to come across some healthy colonies of Anchor corals (Family Euphyllidae) as these were badly affected during the coral bleaching event last year.

There were a few Brain corals (Family Mussidae).

It was exciting to see healthy Acropora corals (Acropora sp.). Later on, I found out that the rest of the team saw very VERY large colonies of Acropora corals! Something we don't often see except at places like Raffles Lighthouse! 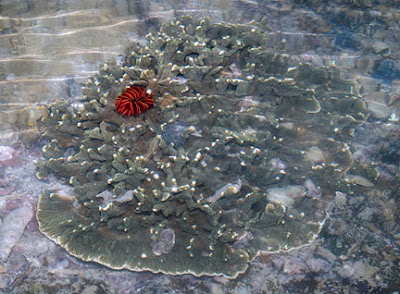 Other exciting sightings include Carnation coral (Pectinia sp.) and Lettuce coral (Pavona sp.) which are also not very commonly seen.

There were also some Mole mushroom corals (Polyphyllia sp.). 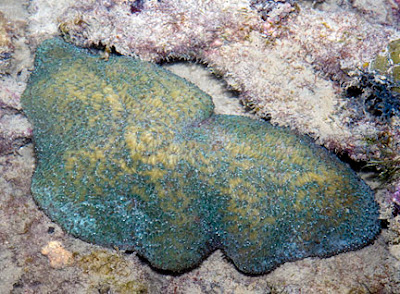 There were some nice large colonies of healthy Galaxy coral (Galaxea sp.). 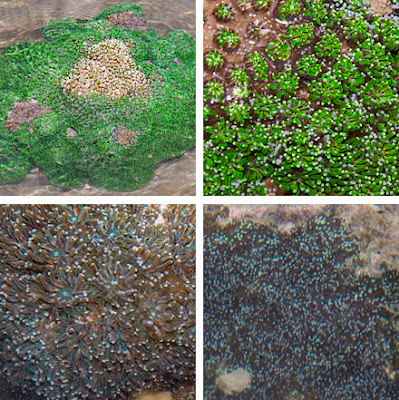 We saw many different kinds of leathery soft corals (Family Alcyoniidae) in various colours and shapes. 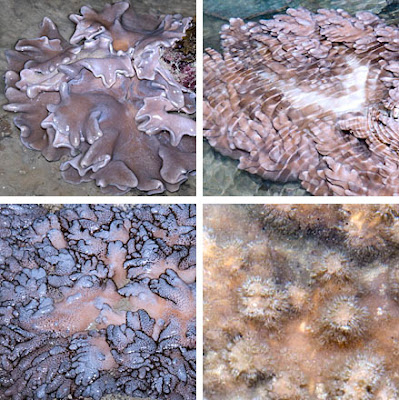 The Sentosa ladies are impressed by this huge leathery soft coral! 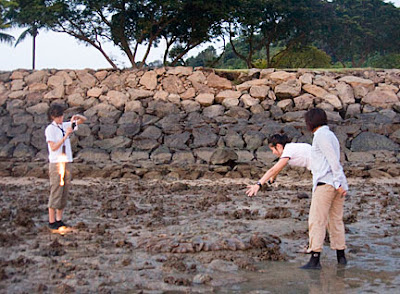 As well as clusters of pretty flowery soft corals (Family Nephtheidae) that formed an underwater garden. Some of them are very colourful, and as Kok Sheng mentions, reminds us of the shores at Tuas. 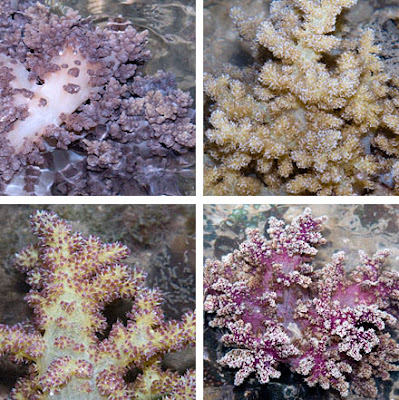 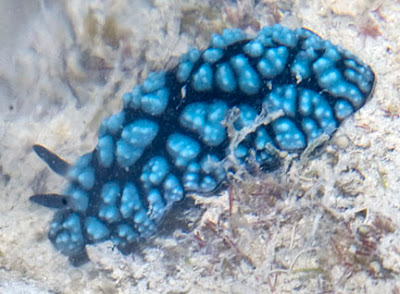 We also saw one Phyllidieila nigra which secretes a white substance when it's disturbed. Shao Wei saw an octopus, but I was too slow to take a photo of it. 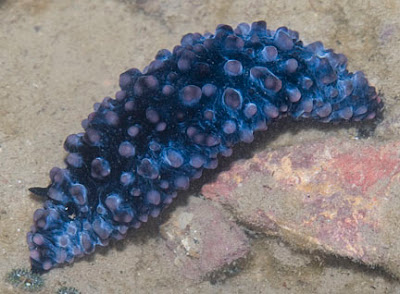 We saw several of these Black spotted flatworms (Acanthozoon sp.) which are not uncommon on our reefs. There were many large Barrel sponges (Xestospongia testudinaria) on the shore. 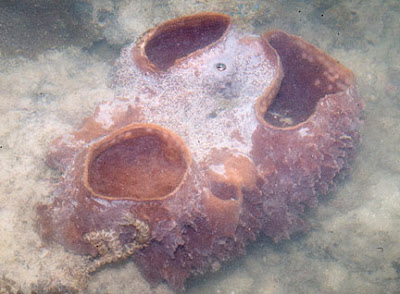 I only noticed this long Synaptid sea cucumber (Family Synaptidae) on the sponge when I got home to process the photos! 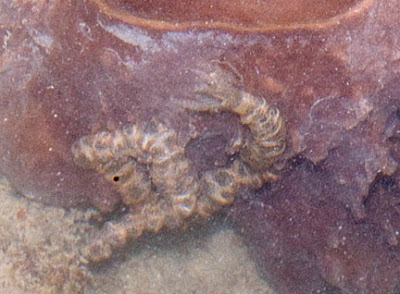 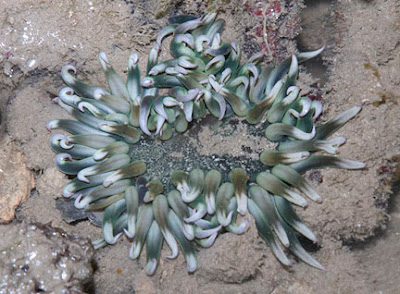 We also came across a cluster of many Magnificent anemones (Heteractis magnifica), at least six that I could see. By that time, the tide was coming in and it was hard to see if there were any anemonefishes in them. But I thought I saw a flash of at least one anemone fish. 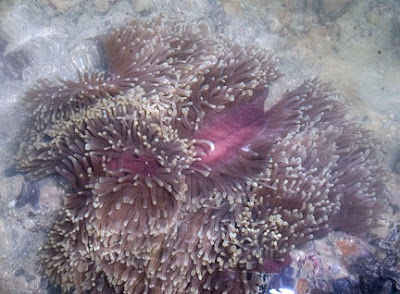 There was also a Giant carpet anemone (Stichodactyla gigantea) near them and I managed to get a bad blurry shot of a tiny anemonefish in it. 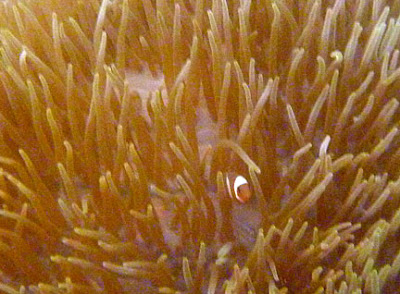 Dr Daphne Fautin, world authority on sea anemones who just left us (we miss her already) had shared that such 'anemonefish anemones' can live for 100 years or more. Plus the presence of many large hard coral colonies, I'm getting the feeling that this shore is quite old and has many marine creatures that might have been here for a very long time.

The rest of the team will soon share what they saw. The Serapong shore is very long. Although we spread out and tried to cover it as best as we could, it would be great to come back again to have a better look.

At sunrise, a large container ship in on the horizon near the shore while lies opposite the container terminals on the mainland. 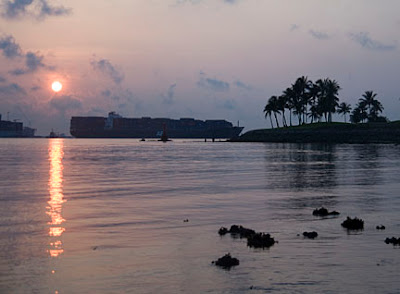 This shore reminds me very much of the Sentosa reefs that were reclained for the Resorts World integrated resort. Here's more photos of what was lost to reclamation.

So it's good to know about the lovely reefs at Serapong. And even more heartening to know that there are people like Shao Wei, Xi Lin, Sheila and Sylvester who care about them!

High resolution photos of this trip are on wildsingapore flickr.

Tomorrow is the last in a series of exhausting field trips. Back to Changi!