There are strange large fat red sea anemones at Punggol. The rest of the team have been seeing them on their visits there. Kok Sheng, Mei Lin and James have shared photos of them. 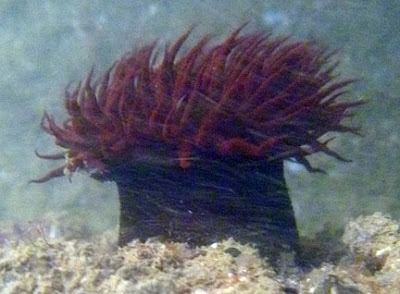 James recently showed Dr Daphne a photo of it and she is mystified! I thought we should let her have a closer look so that we can find out more about these anemones!

I arrive after sunrise (for a change) at this scenic boulder-strewn shore. 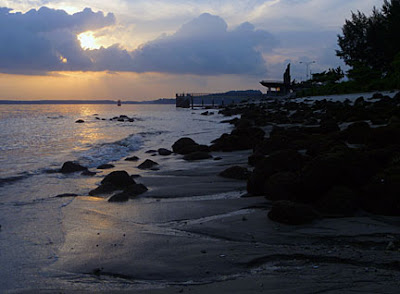 The most abundant sea anemone on this shore must be these Banded bead anemones (Anthopleura sp.). 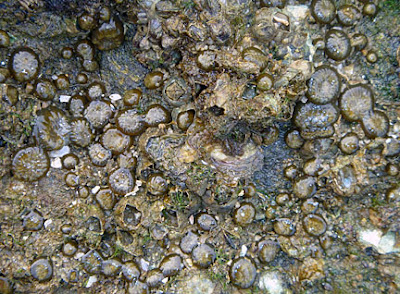 Most of them seem to be Anthopleura dixoniana, which Dr Daphne points out has a 'chequered' pattern on the oral disk when the tentacles are expanded. 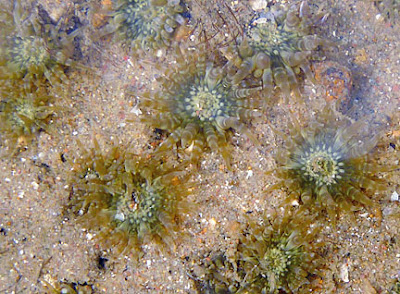 But the red anemone was quite stunning. There were many of these rather large anemones (about 5-8cm in diameter), scattered among the large boulders. So far, we haven't seen them on any of our other shores. Here's a closer look at the oral disk of the sea anemone. 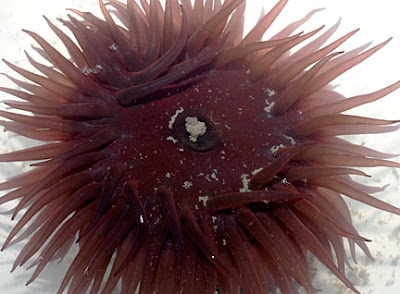 The short fat body column is full of tiny little bumps. Dr Tan Swee Hee commented that the colour resembles burgundy, and indeed, a much classier term than 'red anemones' would be 'burgundy anemones'! 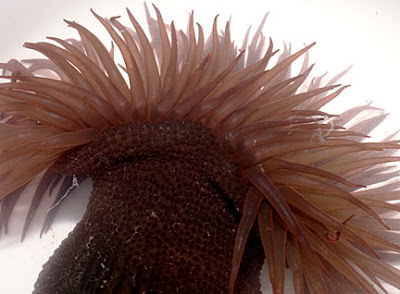 I also took the opportunity to get good photos of the pretty Diadumene lineata, which are among the most common sea anemones in the world. When submerged, it has slender delicately spotted tentacles. 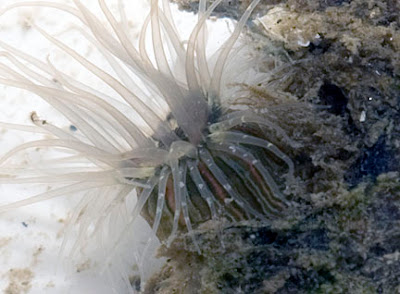 And a view from above. This tiny anemone is quite pretty! 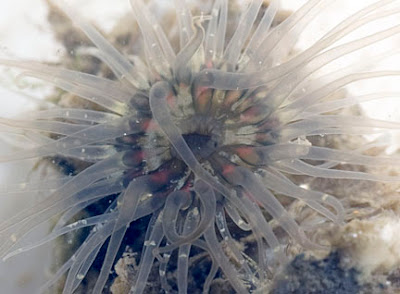 Not all slimy slippery blobs are anemones. Some of them are ascidians, some are sponges and this particular one was a nudibranch!! I mistook the flowery gills for anemone tentacles! 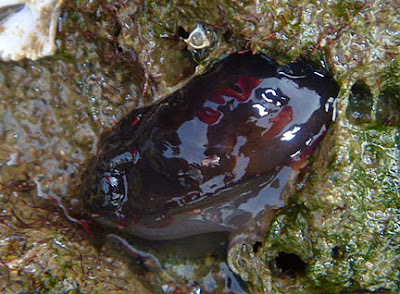 I'm not sure what kind of nudibranch it is. It was pale grey with a fine pink edge around the body, and the typical dendrodoris rhinophores. Hope some of the nudibranch lovers can help. 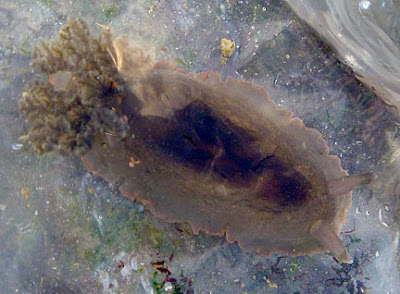 As usual, there's plenty of distractions from anemones. Although the boulders looked quite barren, a closer look reveals all kinds of animals living on, under and among them. There were patches of Zebra coral (Oulastrea crispata), lots of little and large crabs, many creeping Onch slugs. Snails like the Spiral melongena (Pugilina cochlidium) and drills (Family Muricidae) were abundant, as well as their egg capsules. In some areas, living waves of enormous sea slaters (Ligia sp.) washed among the rocks. 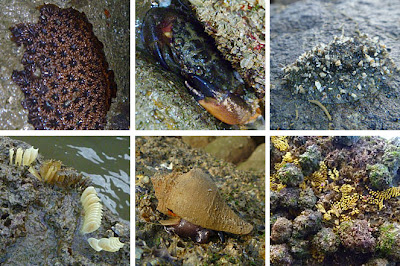 There were many coiled shells stuck on the rocks. These are not worms but are actually snails that create coiled shells! Like many other snails, these vermetid snails (Family Vermetidae) have a pair of tentacles, and an operculum that is used to seal the shell opening. 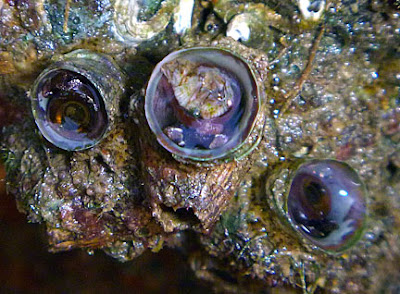 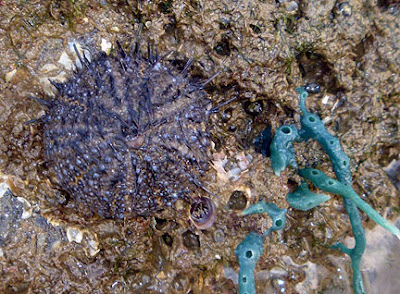 All kinds of colourful sponges were also growing on the rocks. I also saw some colourful hydroids and one sea fan (but the photo was too blurry). 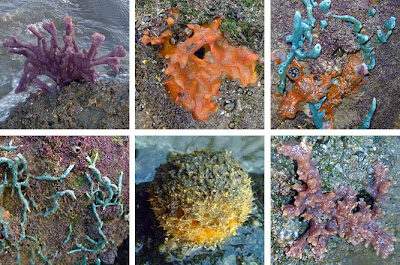 As the tide turned, two men started out into deeper water. Behind them are shipping facilities on Johor. 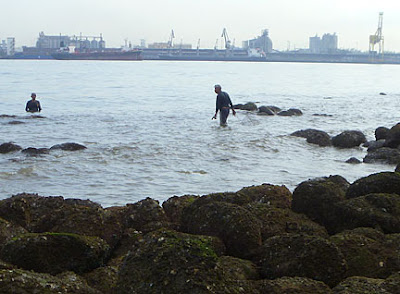 It seems that they are laying fish traps in deeper water. 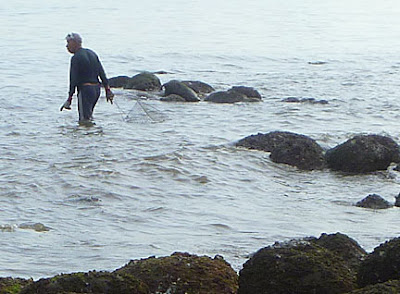 There was a family on the shore and the grandma came up to see what I was doing. She frequently visits the shore, she told me, to gather green mussels (Perna viridis) which grow plentifully here. She added that Chinese nationals often came to gather the oysters and other marine life. During our brief chat, I mentioned that she might want to reconsider feeding her family with marine life gathered from this shore as they are too close to the industrial facilities nearby. Shellfish and fish can accumulate toxins that can make us ill. 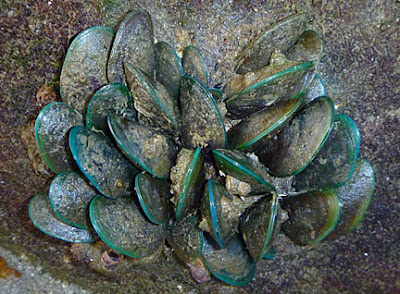 Although the beach is quite clean, there are still some disturbing litter such as two large road dividers that must have been on the shore for some time as they were covered in barnacles. 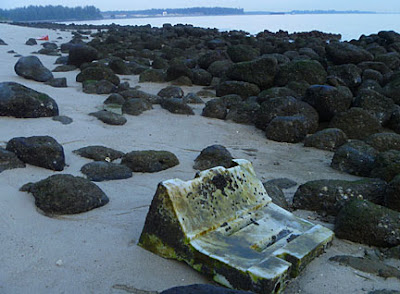 There are also some abandoned fishing lines and ropes. This bunch has entangled and uprooted a branching sponge that is now dying. It was well after sunrise when I got tired looking at the shores and headed back. I had a quick look at the shore near the jetty. Large groups of school kids were lining up on the jetty, getting ready to take the boat to Outward Bound Singapore on Pulau Ubin. 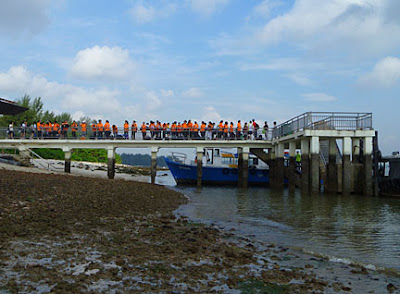 The tide was coming in and sun getting hot. I couldn't find the small anemones that Kok Sheng and Mei Lin saw. On the seaweeds there, I saw coils of eggs. 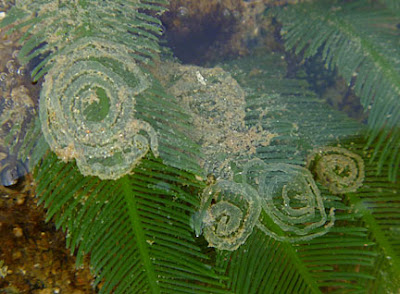 Hopefully Dr Daphne can tell us more about the burgundy anemones! One more species to add to the Singapore checklist? Hurray!

Find out MORE about our sea anemones. Come for Dr Daphne's "Sea Anemone Lecture"on 21 Jun (Tue) 7pm. It's free and all are welcome to attend. She will speak on "Hidden treasures of biodiversity: flowers of the marine world (sea anemones)"
Posted by Ria Tan at 2:54 PM