We saw a black-tipped reef shark on Pulau Semakau while we were removing a net from the shore! 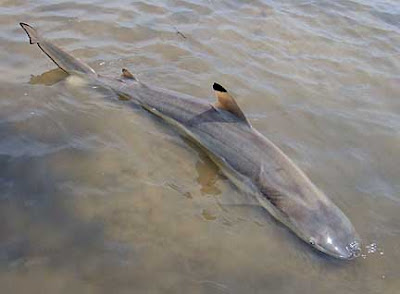 This shark (Carcharhinus melanopterus) does indeed have a black tip on its dorsal fin!

Sadly, it was a dead shark. Since we had the long tape for measuring the net, we measured the poor beast. 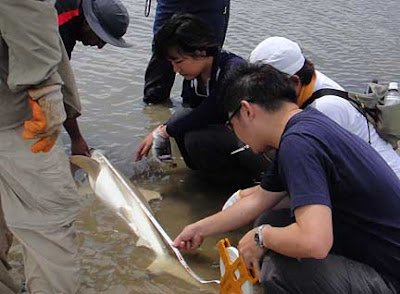 From the snout tip to the beginning of the tail it was about 1m, with the tail about 1.2m. 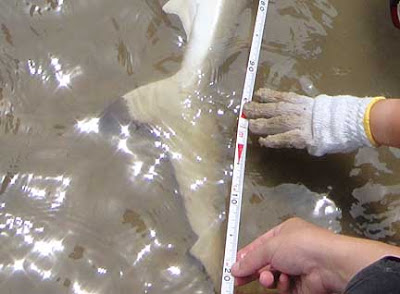 It was clearly a male with a pair of respectable claspers on the underside. 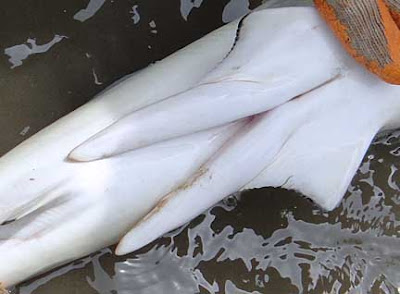 The shark seems recently dead, the eyes were still clear and it didn't smell bad. We looked closely at the shark and couldn't find any signs of why it had died. There wasn't a scratch on it. We put the shark into deeper water, just in case it might revive (it didn't). In any case, as part of nature's way, it will be food for other animals on the shore. 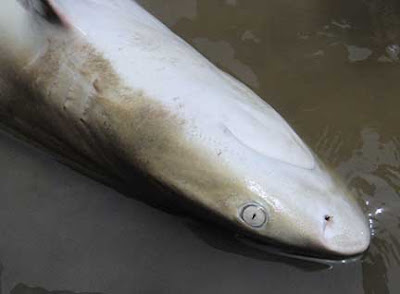 Black-tipped reef sharks are often seen at Pulau Semakau, as well as our other southern reefs. We have encountered them on our trips to the submerged reefs. Debby earlier shared a sad encounter with young sharks being fished at Pulau Hantu.

We were on Pulau Semakau to remove an abandoned heavy duty net. These heavy duty nets are not used to catch fish the way monofilament driftnets are. The net is likely to have come from a fish farm. More about the net on the Project Driftnet blog. 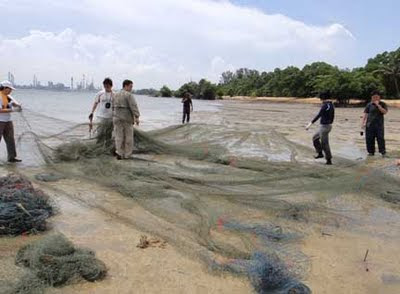 After we packed up the net, we decided to have a quick look at the Southern shore to check out the strange contraption that has been seen there. As we walk past, I noticed three of the large Pink-eyed pong pong trees (Cerbera manghas) have fallen over. 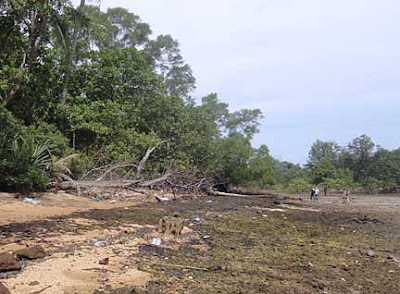 Here's a closer look at one of the fallen trees. Oh dear. These trees are listed as 'Critically Endangered' and the population on Pulau Semakau looks old and large. 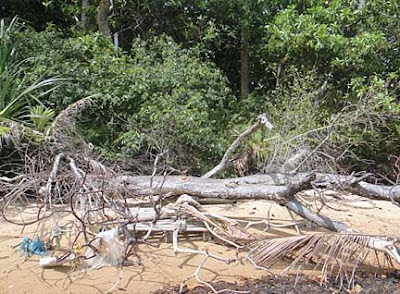 I haven't seen this pretty Tengar putih (Ceriops tagal) for a long time. It seems to have grown bigger! It had lots of flowers and developing fruits. 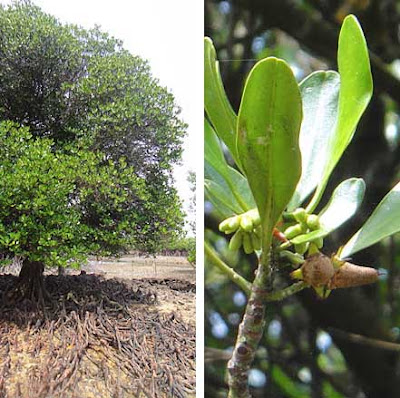 On the Southern shore, there's seagrasses and large anemones growing right up to the mangrove trees!
Finally, we reach the strange series of orange buoys arranged in a ring. They are quite large, about the size of an adult human! 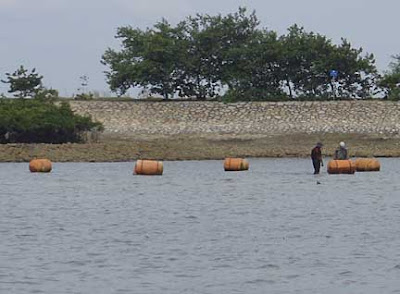 The buoys are attached to a heavy iron structure in the shape of a pentagon. 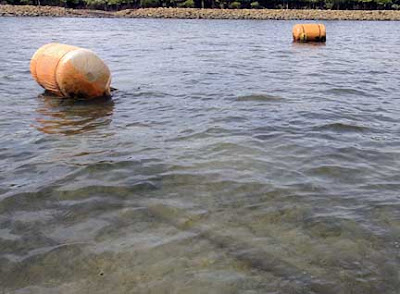 The buoys are attached with a short rope so it seems the iron structure is expected to float in high water. To support a net below? 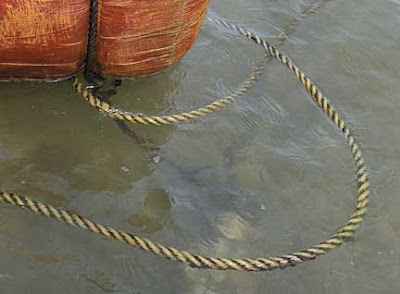 The entire contraption is attached to a huge anchor. Which is taller than Andy! The structure seems expensive. It is unlikely to have floated on its own to this shore. Was it dumped on Pulau Semakau? Why? 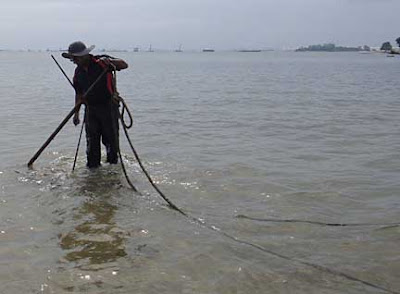 The contraption is very close to the fish farm near by. 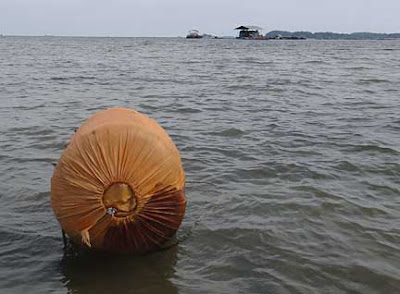 Before we started our trip, we had a look at the contraption from the seawall. Marcus first noted this structure last month (also featured on Nicole's blog), and also noted by Kok Sheng last week. 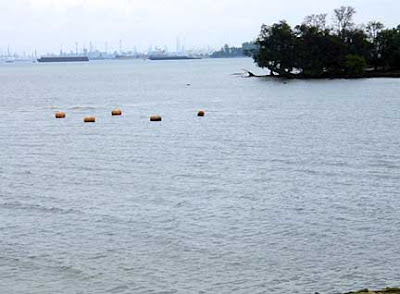 Here's the photo Marcus took in April during low tide. See how big it is, and the fish farm on the horizon.
Here's a look at the fish farm from the seawall. This is said to be one of the largest fish farms in Singapore. 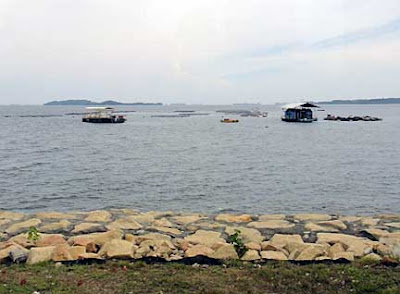 Does the contraption belong to the fish farm? Did they 'park' this contraption on Pulau Semakau? Did the heavy net we just dealt with also come from this fish farm? As we pondered these questions, we trudged back to drag the abandoned net to the roadside.

Today, lots of other happenings. Our diving friends are at Pulau Jong to do the regular ReefFriends coral reef survey. We notice a boat just off the 'char siew pau' shaped island on our way to Semakau. Hello Chay Hoon and friends, hope you are having a good dive! 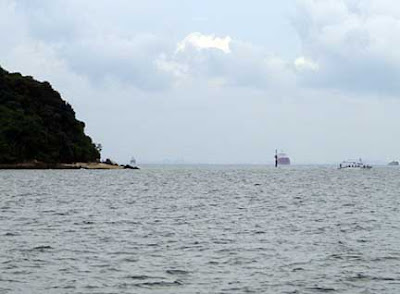 On the way home, a look at the massive reclamation for the Pasir Panjang Container Terminal project right next to Labrador and near Sentosa's natural shores and Cyrene Reef. Wind is blowing off plumes of sand from the mountain of sand on the project site. 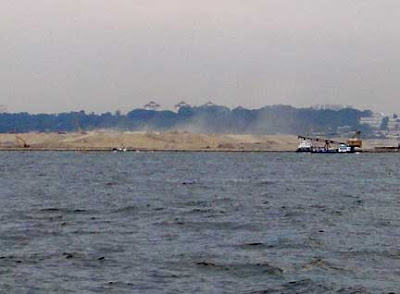 Off Cyrene, massive dredging is on going. 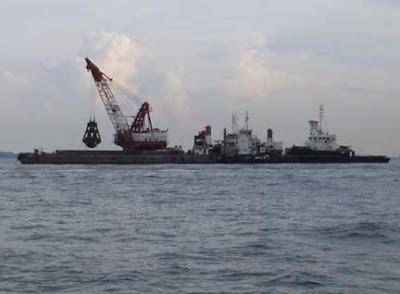 It was a bitter-sweet day out on Pulau Semakau. So much more to do for our shores...