ACRES aims to secure the freedom of the remaining 25 wildcaught dolphins bought by Resorts World Sentosa (RWS) for their attraction in Singapore. To do so, ACRES has launched series of resources including a facebook page.
Join ACRES at the “Save the World’s Saddest Dolphins” roadshow at the Far East Plaza (Level 2 Concourse) from 27 May (Fri) until 29 May (Sun) 11am - 9pm daily. Record your video petition at the roadshow and urge Resorts World to please let the dolphins go.

In a press release, ACRES explains that RWS bought 27 wild-caught Indo-pacific bottlenose dolphins from the Solomon Islands between 2008 and 2009. In 2010, two of the dolphins died whilst undergoing training, despite the top-class care that RWS had promised. The dolphins are currently being trained in The Philippines and will be transported to RWS this year for an interactive dolphin spa programme.

ACRES also has a website for the campaign. Which includes a comprehensive report about the dolphins for RWS including dolphin 'training'.

This page explains why RWS's plan is cruel. The key points are:
The ACRES website also has campaign reports, the latest news and how you can show your support. And this moving video clip.
Related links

In his first public comments on the controversy, RWS CEO Tan Hee Teck said they had followed the Convention on International Trade in Endangered Species of Wild Fauna and Flora (CITES) rules on the trade of endangered species. He added: ""All our dolphins in Subic Bay today are very healthy and we hopefully will be able to bring them, what I call back home here, in the next 12 months."

In a Straits Times report on 29 May, "RWS issued a statement, saying the team was providing the 'very best care' to the dolphins, including a superior diet and veterinary attention. It added that it was committed to marine research, conservation and education. Asked to respond to Mr O'Barry's appeal, an RWS spokesman said yesterday his CEO will do so after he has seen the letter." 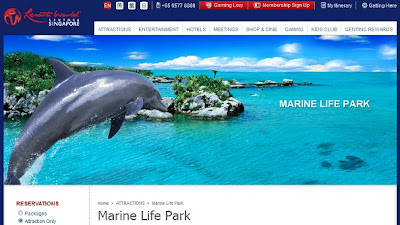 Including their page on 'marine conservation'. 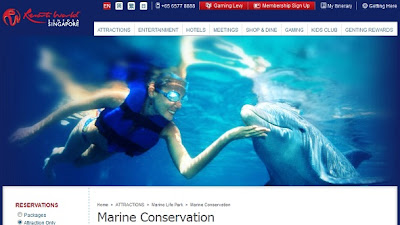 Today, Resorts World Sentosa is reported to have said it's "on track" to open the second phase of its integrated resort, which includes a maritime museum, an aquarium and a marine life park. These attractions will open progressively from the third quarter, this year, beginning with the museum.

Related posts in this blog