It was dark, the water was murky. I was trying to photograph a gianormous squid during a predawn trip today when this even larger THING silently swam towards me. 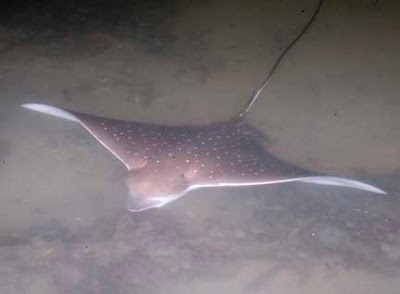 It was a beautiful ray! I think we both got a shock!

It hovered a little in front of me before splashing away. Wow! I think I almost forgot to breathe for a while.

Later on, it swam by me again as I continued surveying the shore. So I had a chance to take more photos. As you can see, the water has a 'sandy' sheen of oil, so it was difficult to take a nice photo of this beautiful animal. It was about 60cm wide with a very long skinny tail.

It has a such a cute face! I think it's a Spotted eagle ray (Aetobatus narinari). According to the IUCN's fact sheet, this fish is globally Near Threatened. One of the reasons it is threatened is that it reproduces slowly. Females give birth to live pups.

The fact sheet adds "The presently known Aetobatus narinari is most probably a species-complex of at least four different species. However, it is here considered as a single species as presently recognised." Subaraj also saw an Eagle ray in this lagoon some years ago!

This is the huge squid I was trying to photograph. It was about 30cm long. It was rather lethargic and didn't move about quickly, settling on the sandy bottom.

Later on, I saw a similarly large squid that must have died recently. Tiny snails were already gathered around it. Perhaps these squids have just mated? And are now dying as part of the natural life cycle?  Did the Eagle ray come to feed on them? The IUCN fact sheet says spotted eagle rays often enter coral lagoons to feed on a wide variety of bottom-dwelling animal including worms, clams, snails, cephalopods (octopus, squids), crustaceans and fishes. Wow, so much more to learn about our marine life!

Besides the humungous squids, I also saw some small ones that I've seen here before.

There's lots and lots of fishes in the lagoon. Tiny ones everywhere, and big ones lurking among crevices in the rocks.  There were lots of gobies (Family Gobiidae), cardinalfishes (Family Apogonidae), damselfishes (Family Pomacentridae) large and small, with many striped Bengal sergeants (Abudefduf bengalensis). I also saw a few filefishes (Family Monacanthidae) and halfbeaks (Family Hemiramphidae). 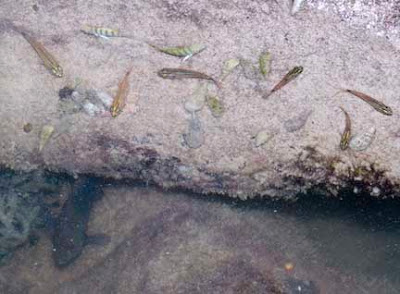 As usual, I make a quick check on the coral growing in this lagoon. Among the special corals I saw were one small colony of something that looks like Bracket mushroom coral, and one colony of Anemone coral (Goniopora sp.).

I saw many large and small colonies of Pore corals (Porites sp.) and most seemed alright.

As usual, the most abundant hard coral on the shore are Favid corals (Family Faviidae). Some of them were half dead or yellowish, but most seemed alright. 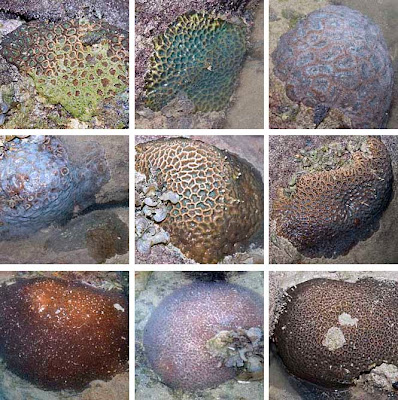 This jellyfish was stuck next to a hard coral that looks rather pale. 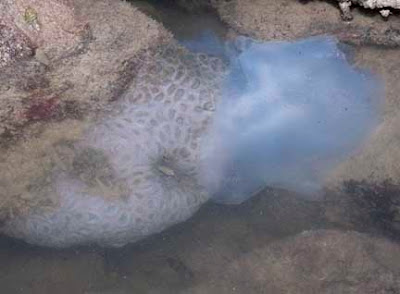 Another special find! I saw this pretty little box crab (Family Calappidae). I'm not sure exactly what kind it is. It was only about 3cm across. 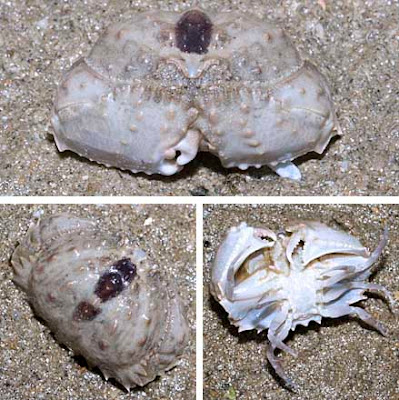 I also saw a small Spotted hermit crab and some lively Spotted moon crabs (Ashtoret lunaris). There were many small swimming crabs (Family Portunidae) too!

I saw several Haddon's carpet anemones (Stichodactyla haddoni) today. Two were settled near the rock wall, and seven in the beds of Ribbon seagrass. Most of them had anemone shrimps (Periclimenes brevicarpalis). 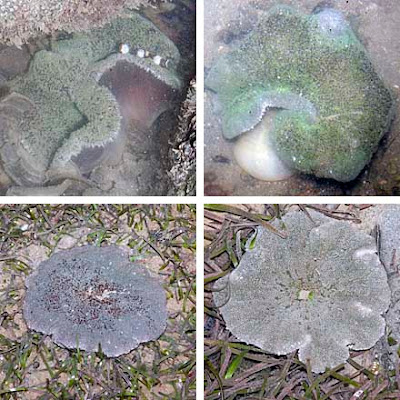 This lagoon has more seagrasses than the other lagoon I visited yesterday. The two patches of Smooth ribbon seagrass (Cymodocea rotundata) are doing well and seem even larger. There were several clumps of Tape seagrass (Enhalus acoroides), their blades seemed chomped off but were green. The small patch of Sickle seagrass (Thalassia hemprichii) had very severely chomped blades. 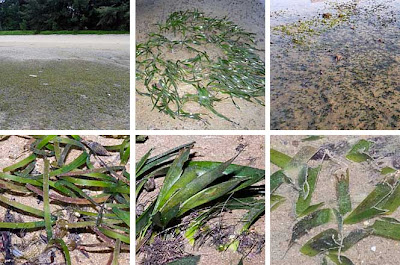 The tide was lowish at sunrise, so I raced over to the OUTSIDE of the seawall to have a look at the reefs that have settled there. Kok Sheng was among the first to bravely explore this area sharing these wonderful photos. I was wondering how the corals have coped with the oil spill AND the coral bleaching last year. 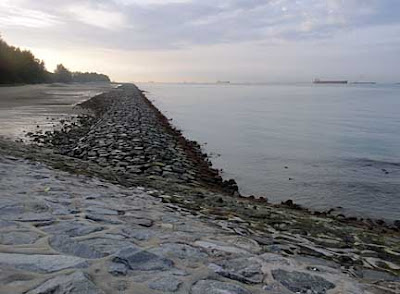 It's terribly slippery down the seawall, and the rocks are loose. So I carefully slowly slid down on my bottom, trying hard to get steady to take some photos. Some parts of the wall was full of hard corals! 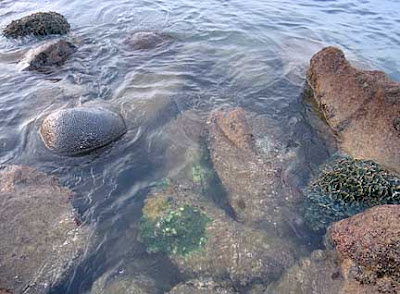 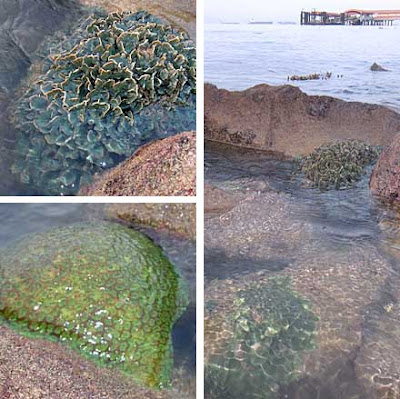 All around me on the seawall were countless Purple climber crabs (Metopograpsus sp.)! We shall have to wait for Kok Sheng, The Human Climbing Crab, to revisit this area and share with us more photos and stories of how this reef is doing. 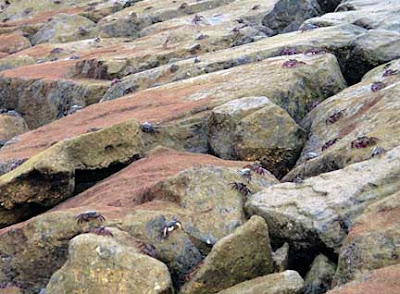 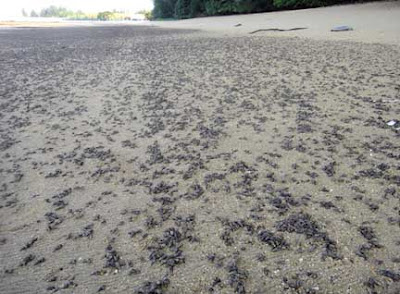 There is still scum on the water on most parts of the lagoon. A closer look and it seems to comprise fine sand. Perhaps picked up by the sheen? 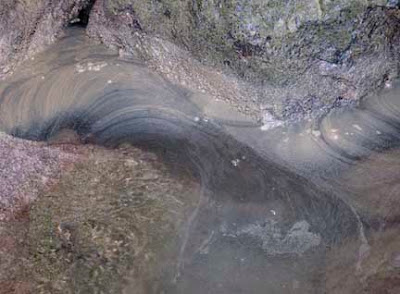 I saw fewer signs of crude oil on the shore. Much of the lagoon sand seemed clean. But digging a little beneath reveals a dark layer and on the high shore on some parts, 'pancakes' of crude are still there. 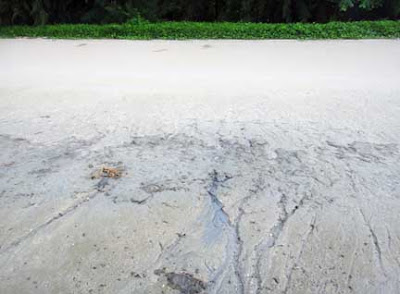 Although I didn't see the other special fishes I saw on my last trip here, it was truly magical to see the Eagle ray!

More about the oil spill on this blog and on the Oil spill facebook page.
Posted by Ria Tan at 9:06 PM