"Once a year, four days after the full moon on the fourth month, our corals spawn" said Jeff during a recent briefing. Wow!
We were afraid that our corals wouldn't be up to it due to the massive coral bleaching last year. But our corals did mass spawn again! Thanks to Mei Lin and Jeffrey Low for sharing photos and stories and video clips, we get a glimpse of what went on.

From Mei Lin, I learnt that Singapore is one of the few places where coral mass spawning has been monitored for as long as 7 years! This mass coral spawning event was first discovered by Dr. James Guest. He also recently gave an interview on the Naked Scientists (Podcast series) on the coral spawning.

Teams of divers checked out the natural reefs of Pulau Hantu and a coral transplanted site at Pulau Semakau reefs in the evenings during the spawning period. And they were not disappointed.

Mei Lin shared that this year's event is considered unique: because a new record of coral has been noted to spawn (Diploastrea sp.), and because the monitoring shows that transplanted corals have the potential to do well on our reefs!

Besides corals having massive sex, the divers also saw lots of fabulous marine life. Including Betsy, the resident sea turtle at Pulau Hantu who is now 1m long!

See all the photos and stories of the 2011 coral spawning on Mei Lin's blog and awesome photos and video clips on Jeffrey Low's flickr site. 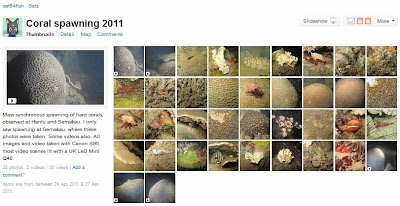 What is coral mass spawning?
Some corals release their eggs and sperm all the same time. Called broadcast spawners, these mass spawning events usually occur once a year, a few nights after full moon. The eggs and sperm drift to the water surface where fertilization occurs.

After a few days, the embryos will have developed into coral larvae that drift about and eventually settle down to form new corals.

While bazillions of eggs and sperms are released during a mass spawn, most don't make it. Hordes of marine creatures gorge on the spawn, from fishes and crabs to jellyfishes. As the tiny coral larvae develop, they have to survive the countless predators that constantly sieve the water for plankton and edible bits. As well as many other challenges that we are still learning about. Excessive sedimentation, for example, can interfere with fertilisation and other aspects of coral larvae survival and successful settlement.

Why is coral mass spawning in Singapore a big deal?

From Sex in the Tropics 2008 on the blooooooooooo blog

Coral mass spawning in Singapore was first recorded by Dr James Guest in 2002. It was the first record of coral spawning in the tropics. At least 18 different coral species from ten genera and five families (Acroporidae, Faviidae, Merulinidae, Oculinidae and Pectiniidae) have been observed to spawn in our waters! Mass spawning occurs on the third to fifth nights after the full moon between 8 and 10 p.m.

In interviews with the media, Dr James Guest emphasised that corals are part of Singapore's biodiversity and natural heritage. "There are 255 species of corals recorded here, and there may be some corals here that were around before Stamford Raffles arrived."

The fact that our corals mass spawn shows that our reefs are functioning well! According to Dr James, the number of coral species in Singapore that mass spawn is "as high as on other Indo-Pacific reefs, like the Great Barrier Reef... " This shows how rich Singapore's natural heritage is. We can find right at our doorstep: "diverse, functional and fascinating coral reefs, that people would normally associate only with countries like Australia."

Have our corals spawned before?
Yes they have! Here are some awesome photos from previous years' mass spawning events.

Our corals did it too in Apr 2008. The photo below is by Karenne Tun from Nature in Singapore. More photos and stories on blooooooooooo and on Jeff's flickr. 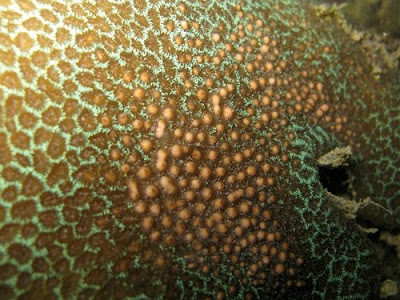 Wai blogged about her experience during the 2007 mass spawning event: part 1 and part 2. 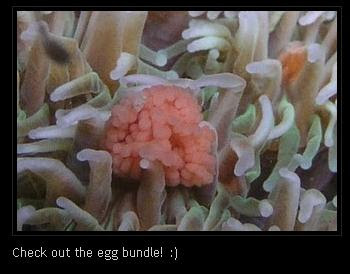 Jani has this fabulous series of photos of the 2006 mass spawning event. 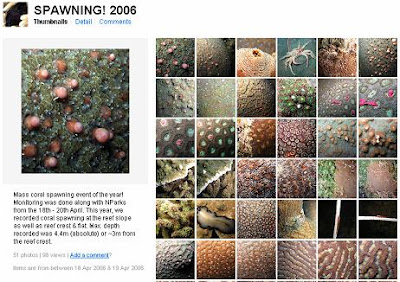 AND of the 2005 mass spawning event. Thanks Jani! 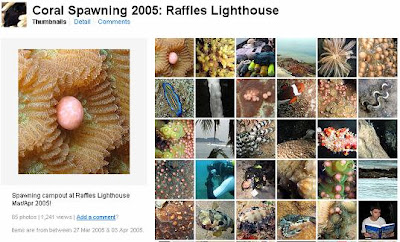