The river gives Sungei Buloh Wetland Reserve its name and is the first thing we see when entering the Reserve. It begins some distance away up south, where it's a lot smaller! Over the last two days, I've visited the mangroves around this 'younger' and slimmer Sungei Buloh Besar.

Sungei Buloh Besar runs between the Visitor Centre and the Reserve proper, spanned by the Main Bridge. The area that I visited is between the two stars in this screen shot. Further upstream, from Google Earth, it seems the stream is fed by a series of canals that wind through the agricultural area here. 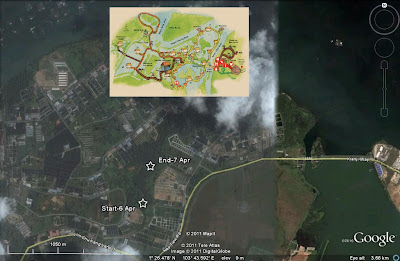 Along the small stream, there are narrow to wide patches of mangroves. In some parts there are lush growths of Jeruju (Acanthus sp.) and Mangrove fern (Acrostichum sp.) under the tall trees. 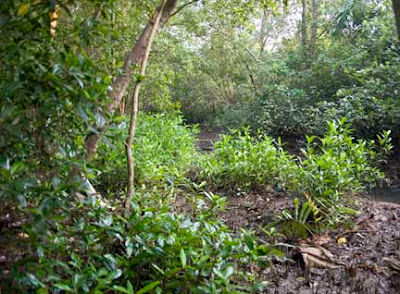 There are lots of trees in the mangroves, with many tall ones. All the large ones that I saw were Api-api putih  (Avicennia alba). 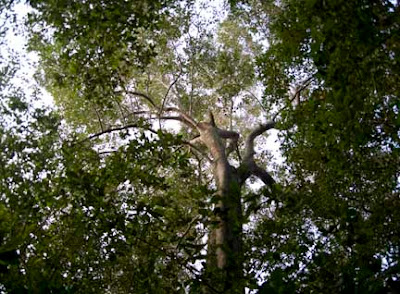 One area had several deep pools ringed by trees, even at low tide. I suspect these are overgrown old ponds as I could see signs of old walls. Other parts were very soft. 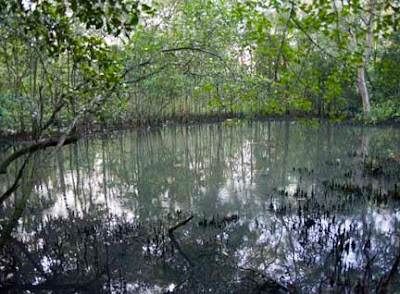 Unlike at Mandai, I didn't see many rarey trees, but this doesn't mean they're not there. I'm not particularly good at finding rare plants.

Among the interesting animals I saw was this little round crab. I think it's the Mound crab (Sarmatium germaini). Poor thing had lost a pincer and was blowing bubbles. There were a few flies hovering around it. 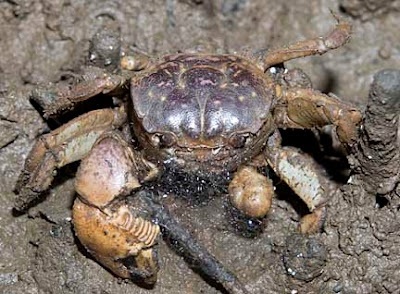 In the pools were lots of fishes and critters that hid away rapidly. I only managed to get these shots. A long unidentified fish with a pretty banded tail.
I saw several tiny Mangrove bumblebee gobies (Brachygobius kabiliensis), and other tiny gobies. 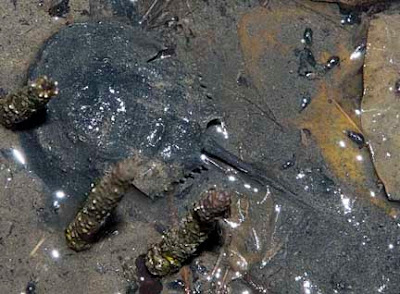 I saw some snails which looked like the tiny Red berry snails (Assiminea sp.) but were larger and with shells that are not so red.
I saw a lot of these empty shells. Possibly of some freshwater snail that is abundant further upstream? Perhaps the Apple snail (Pomacea sp.)?
I noticed more clams than I usually do. And also realised clams can move quite a distance in the mud!
These clams are enjoyed by other mangrove creatures! I saw several with holes drilled into the shell, probably by a Drill (Family Muricidae).

I came across a patch of many of the large heavy clams. These might be Geloina clams (Geloina sp.) also called Lokan, and previously known as Polymesoda sp. which I saw at a recent Mega Marine Survey. Dr Tan Koh Siang tells us how you can keep them in a drawer for a month! 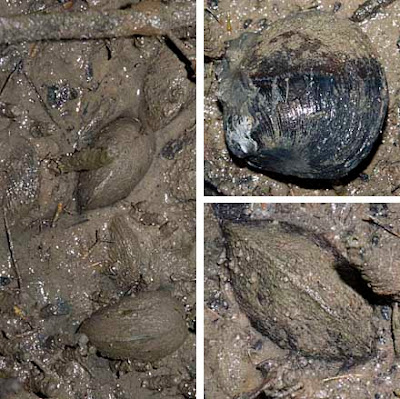 Another abundant creature in the pools were these tiny snails with long banded tentacles. I'm not sure what they are.
Abundant on the tree trunks and on mangrove leaves were these cute little tear-drop shaped Pythia snails (Pythia sp.). 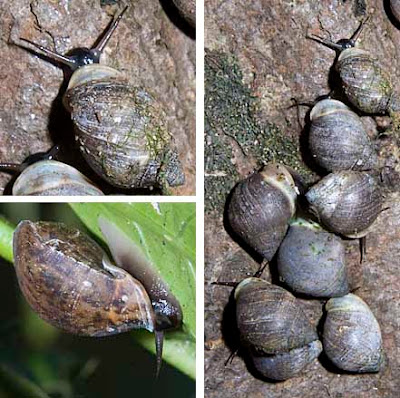 Today, I noticed huge numbers of these mangrove flatworms (Limnostylochus sp.) gathered in small pools when I arrived at first light. As the day wore on, I saw less of them. 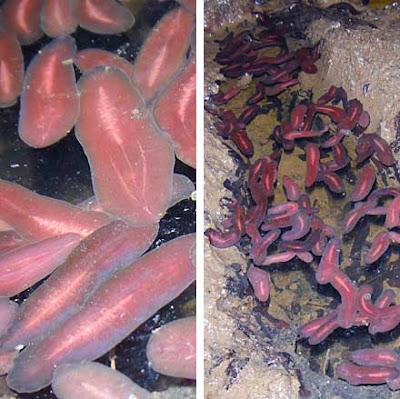 I saw this pretty damselfly which I think is the Common bluetail (Ischnura senegalensis) from Tang's awesome Dragonflies of Singapore guidebook.

In the mangroves, there are signs of busy bees, like this fallen hive. In fact, both mornings as I walked in at dawn, there was a heavy droning high above me as bees busily worked on the blooming Albizia trees. 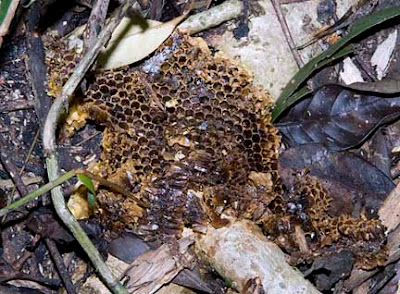 There are lots of birds in the mangroves. I saw a few nests in the mangrove trees. I heard a Straw-headed bulbul, saw some large raptor with banded plumage flying silently among the trees, and the usual assortment of kingfishers, woodpeckers and small birds. 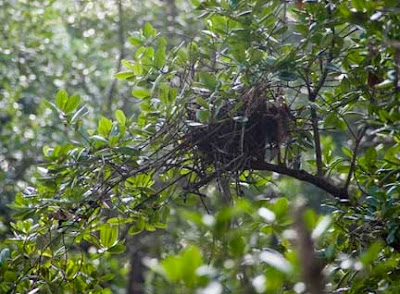 Among some of the disturbing sights I saw on these two trips: tall trees freshly fallen over on the back mangrove areas. 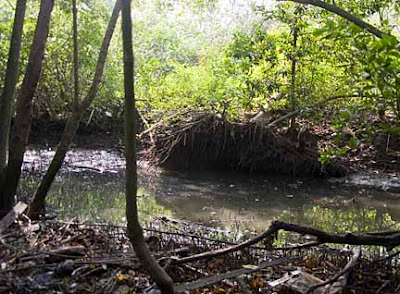 Near the start of the stream, I noticed some of the vegetation next to the mangroves had been cleared. I'm not sure if the brown parts are the result of weed killer use? 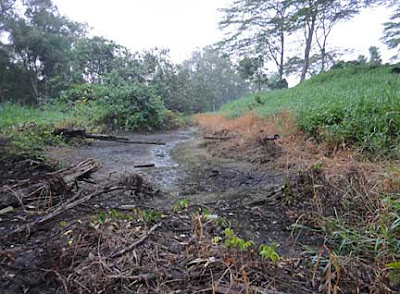 It seems a portion of the mangroves was also chopped. 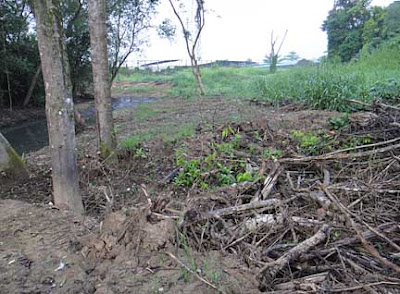 Some of the trees near the cleared area had their branches hacked. The cuts were not very clean.

Among the hacked trees was this slender tree that put out new foliage. I'm not sure if it's some kind of Barringtonia. 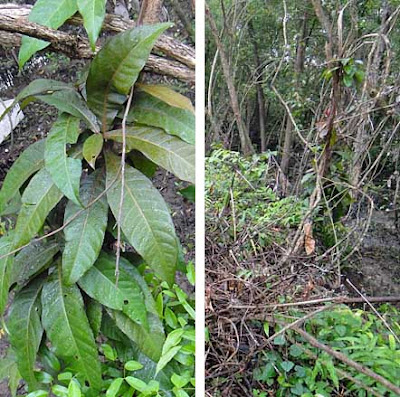 In the pools deeper in the mangroves, lots of trash have accumulated. 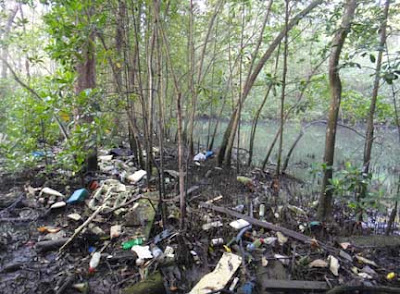 As usual, the trash comprise mostly floating plastic and styrofoam. 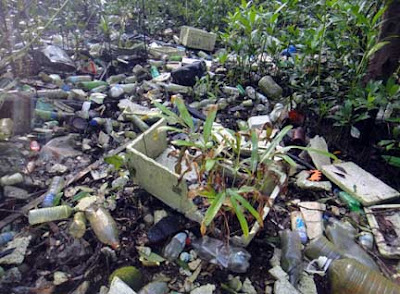 A kind of walkway seems to have been laid among the trees. 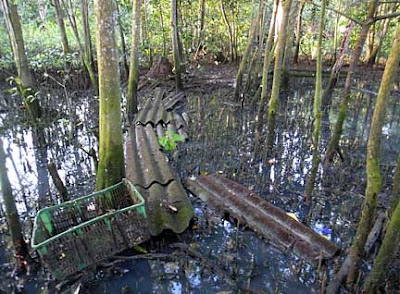 As I was going home today, I realised the water in the stream had changed colour. It was now milky white! 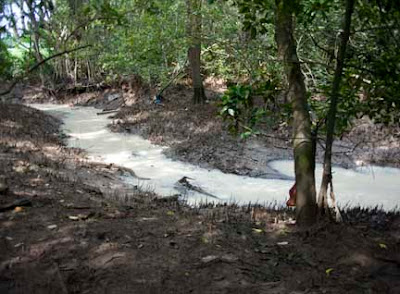 This is the colour of the water that I saw earlier. Somewhat cloudy and greenish, which is generally what it usually is. 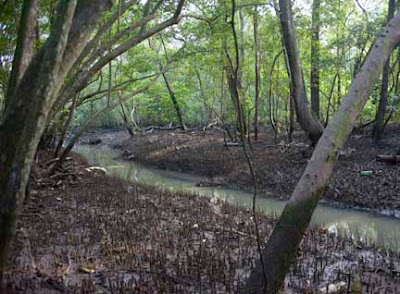 I've only managed to look at a small portion of the mangroves upstream of Sungei Buloh. I'll try to figure out a way to explore the rest of it.
Posted by Ria Tan at 12:06 AM