A year later, how is Tanah Merah's oil-slicked shores? Part 2

Crude oil is still on sitting the shore, and sheen and scum still floats on much of the lagoon. 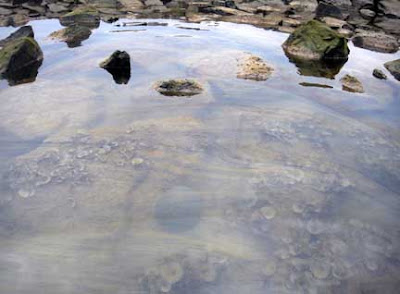 But there's still marine life in the water under the rainbow sheen.

'Pancakes' of crude oil still sit the mid-water mark. The outgoing tide drains along dark streams as they cut into the crude and results in a sheen that I saw almost throughout the entire lagoon. The area near the 'pancakes' smells the same as when I visited the shore the day after the oil spill landed here, nearly a year ago. 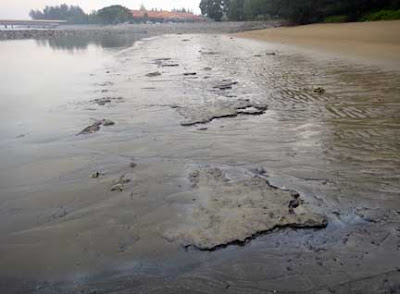 Here's a large coral colony under the rainbow of sheen. 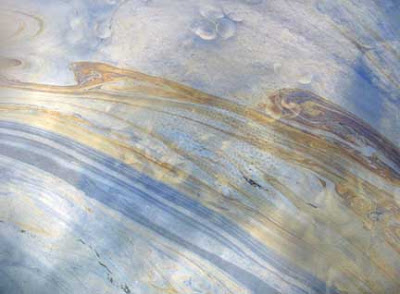 Here's an  underwater view of the corals beneath the sheen.

Halfway through the trip, it poured!! Fortunately, it soon stopped so I could continue to survey the shore. 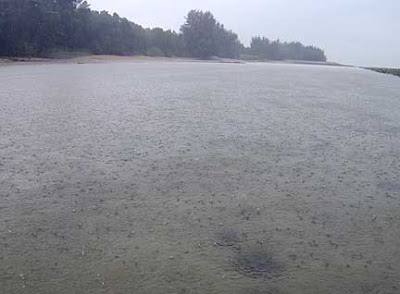 I saw much fewer large hard corals in this lagoon, compared to the other lagoon that I visited yesterday. But the colonies I saw seemed mostly alright and were not bleaching. 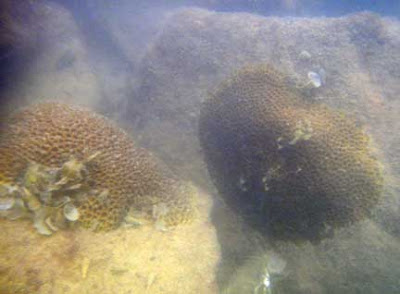 Most of the corals I saw today were Favid corals (Family Faviidae). I also saw some Zebra coral (Oulastrea crispata) and Pore corals (Porites sp.). I saw fewer hard corals in terms of number of colonies and variety of species in this lagoon than in the other lagoon I visited yesterday. I also saw fewer compared to my last visit here in January 2011. Hopefully, this is only because I missed seeing them due to the rain. 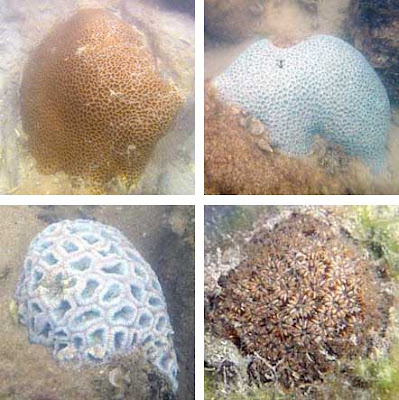 A few of the coral colonies were producing slime. This is how the coral polyps get rid of icky stuff from their living bodies. 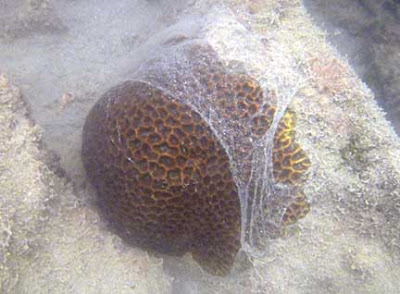 This small colony of corals seems to be struggling with most of the colony dead and covered in scum. 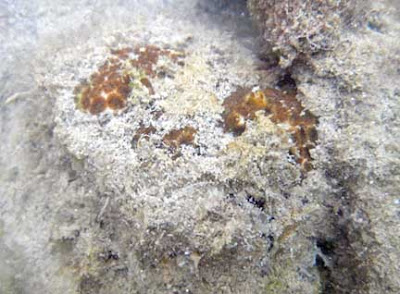 I saw one patch of Button zoanthids or colonial anemones (Zoanthus sp.). 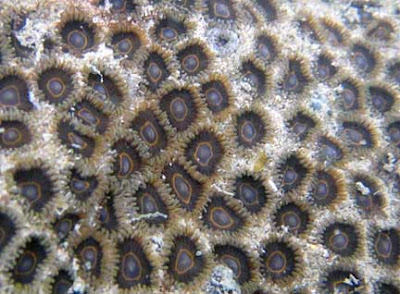 Large parts of the mid-water line along the shore was strained with a brownish scum. 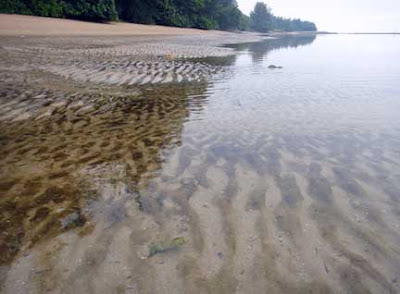 In the water, clouds of the scum was suspended in about half of the lagoon. The water was otherwise quite clear, the sand was mostly firm and not squishy even near the seawall. 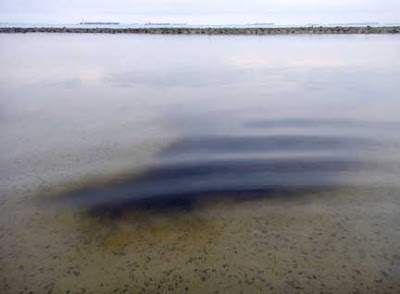 Despite the sheen in the water, the meadows of seagrasses here seem to be alright. 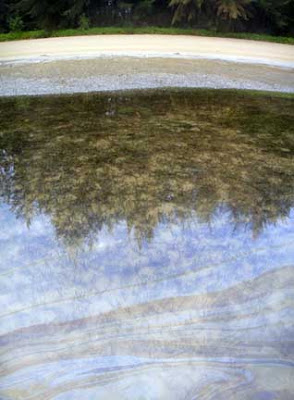 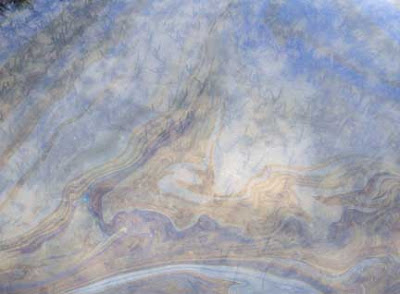 Here's what the seagrasses and anemone look like under the sheen. 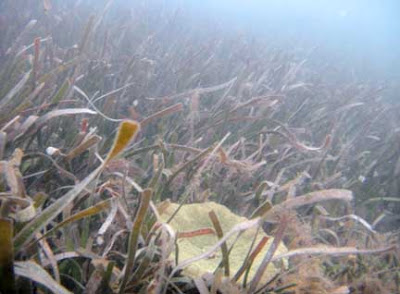 I saw about 10 of these medium-sized carpet anemones. The sandy area was still teeming with Bazillion snails (Batillaria zonalis). 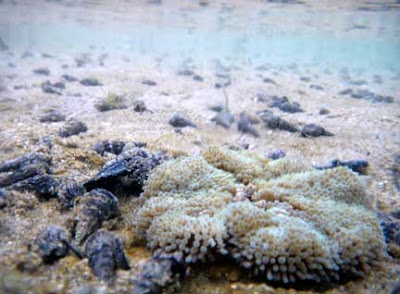 I even saw a small purple one! Alas, I didn't see anemone shrimps in any of them. 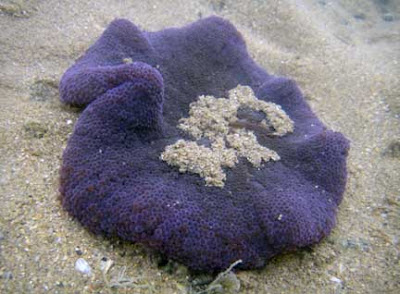 Today I saw about 20 Striped hermit crabs (Clibanarius sp.). They were small to medium-sized, most of them were in shells that were too large for them. I also saw lots of tiny Tidal hermit crabs (Diogenes sp.). I saw many medium sized Swimming crabs (Family Portunidae) zooming away, and this one medium-sized moult of a Flower crabs (Portunus pelagicus).

There were many Swimming crabs also among the rocks in the seawall. 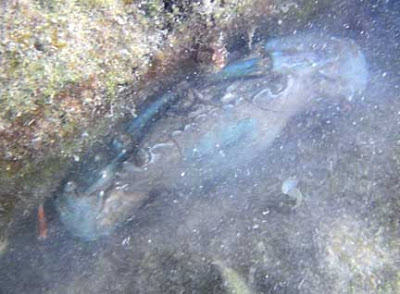 There were lots of Ornate gobies (Istigobius ornatus) everywhere near the seawall. Also many other fishes that zoomed about too quickly for Sneaky cam to shoot. While I'm thankful that I didn't see Mr Stonefish, I also didn't see any seahorses. 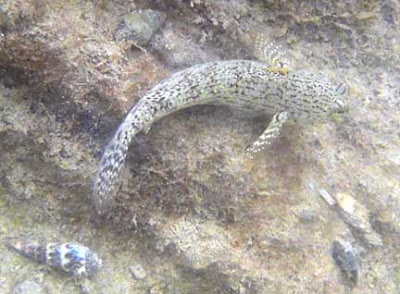 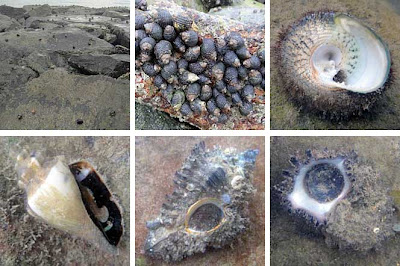 I saw a few  fan worms (Family Sabellidae), both the orange and the brown banded ones.

I saw about 20 Common sea stars (Archaster typicus), including this assembly of four sea stars gathered together. Getting ready to mate? The rest of the sea stars were distributed rather far apart from one another. 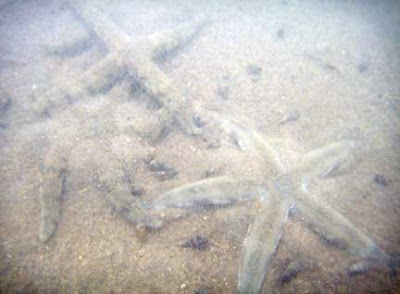 There is a small sand bar here that seems reasonably 'clean'.  I saw several signs of living Acorn worms (Class Enteropneusta). From the poop of some of these buried worms, it seems the sand below is much darker than that above. Stained by crude? Or a sign of oil-munching microbes at work beneath the sand? There were also many burrows and sand balls of Sand bubbler crabs (Scopimera sp.). 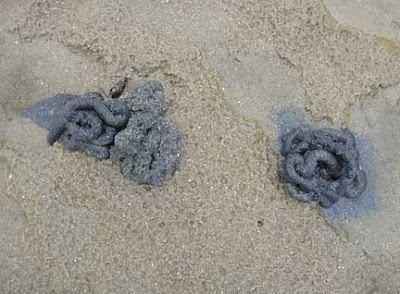 Some shorebirds were foraging on the shore, as well as herons. 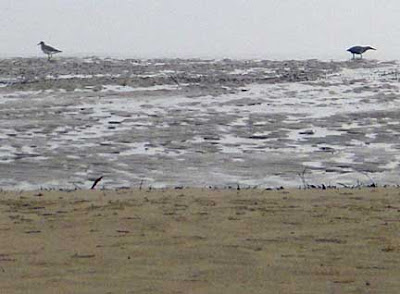 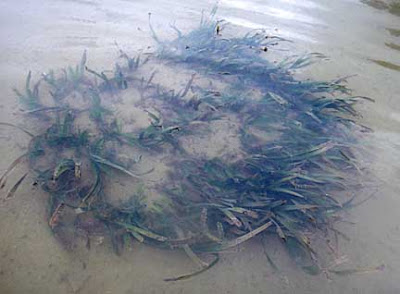 The small patch of Sickle seagrass (Thalassia hemprichii) is still there and looks alright. But I still didn't see any Spoon seagrass (Halophila ovalis) here. 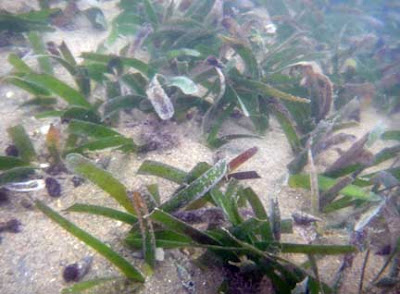 There is a lot of seaweed in this lagoon compared to the other lagoon I visited yesterday. Mermaid's fan (Padina sp.) was particularly abundant. Ropes were covered with Pom pom red seaweed and other kinds of seaweeds. 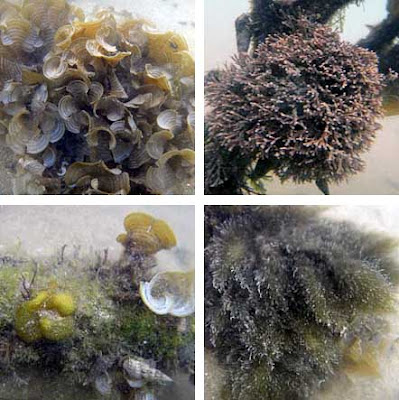 I saw several abandoned driftnets. Some were entangled in the rock wall. 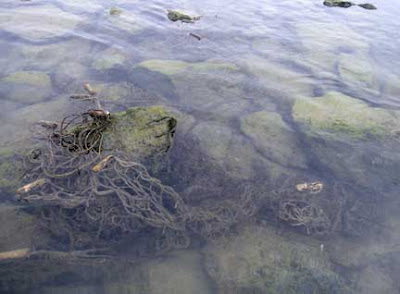 Some were half buried in the sand and were already well encrusted with marine life. 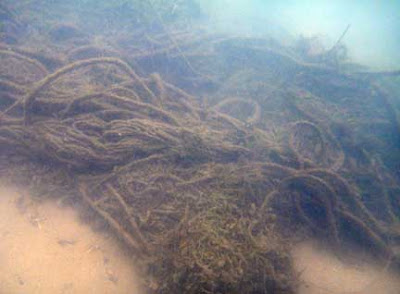 While I was visiting, there was a pair fishing with rod and line on the seawall, and one using a cast net in the lagoon.

I ended up totally soaked and oily after the trip, which is perhaps why I feel miserable about this shore. I suspect it will take a long time before a more obvious recovery is seen on these oil-slicked shores.

More about the oil spill on this blog and on the Oil spill facebook page.
Posted by Ria Tan at 10:48 PM