There is a stretch of shore on Sentosa that I've long wanted to check out. 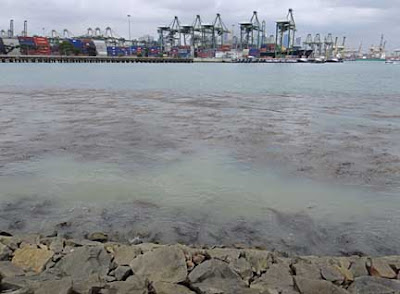 The large expanse of golden brown Sargassum seaweed (Sargassum sp.) suggests that there are reefs out there!

From Google Earth, there are tantalizing signs of a large expanse of reef outside the seawall (circled in yellow) as well as mangroves in the sea-fed lagoon (circled in red). 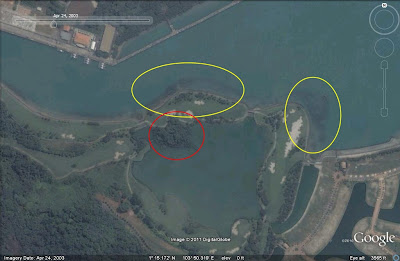 Today, thanks to the kind arrangements by Gee Khoon and Shao Wei of Sentosa, I finally got to see these for myself. We had a very luxurious ride out to the site on buggies with the warm and friendly support of so many people from Sentosa that I didn't manage to get everyone's names. But here is Samuel giving us our first glimpse of the mangroves in the lagoon. 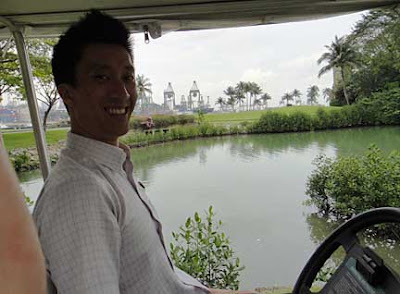 And Sylvester with more of the lovely mangrove lined lagoon. 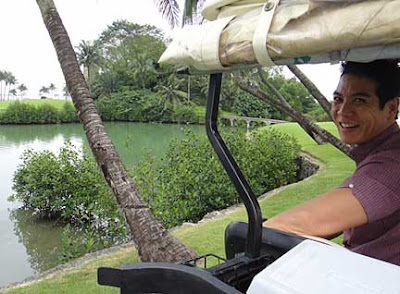 The mangroves are dominated by many MANY Bakau pasir (Rhizophora stylosa) which have naturally settled here. This mangrove tree is listed as Vulnerable on the Singapore Red List, and this the densest patch of naturally growing Bakau pasir that I've seen! 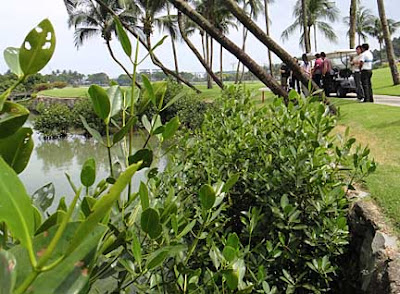 There are much larger Bakau pasir growing in big clump on a more forested edged of the lagoon. In the foreground, luscious Sea lettuce or Merambong (Scaevola taccada). 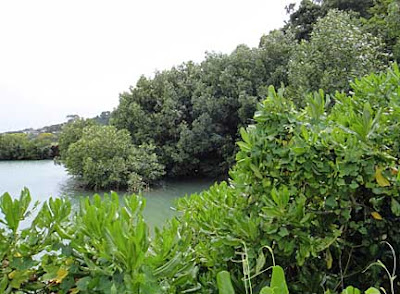 The big mother Bakau pasir trees here are full of propagules, which means 'potential plants'. Mangrove trees like the Bakau have a special adaptation to give their young the best chance of survival in the tough sea environment. Their 'fruits' develop into young tough shoots (the long bean-like things) that eventually drop off to float away, ready to grow rapidly into saplings. And there are lots of saplings all around the lagoon! 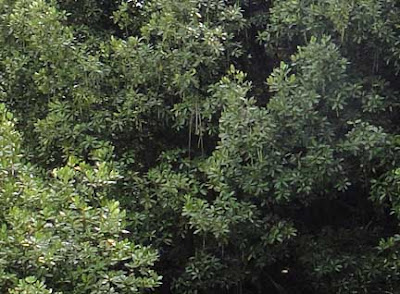 It's a delight to share the wonder of these trees with others who also appreciate and love them. Here's Shufen (left) with Daniel who is a great defender of trees on Sentosa, with Shao Wei. 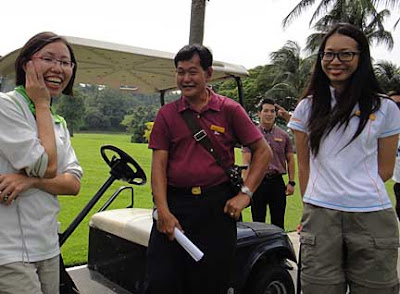 We bumped into the CEO who showed us some bright coloured marine life in the lagoon. As we scrambled down to have a closer look, Jit Chern is taking photos of us among the young mangroves growing in the lagoon. 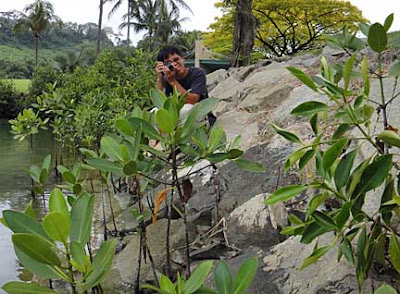 Wow! The brightly coloured sponges in the lagoon are those I more commonly see on our Northern shores! Like the electric blue Elegant branching sponge (Haliclona sp.), a large patch of flourescent Lumpy pink sponge (Haliclona cf. baeri) and some other sponges that I'm not familiar with. Swee Cheng, our resident sponge expert, would certainly find this lagoon very interesting! 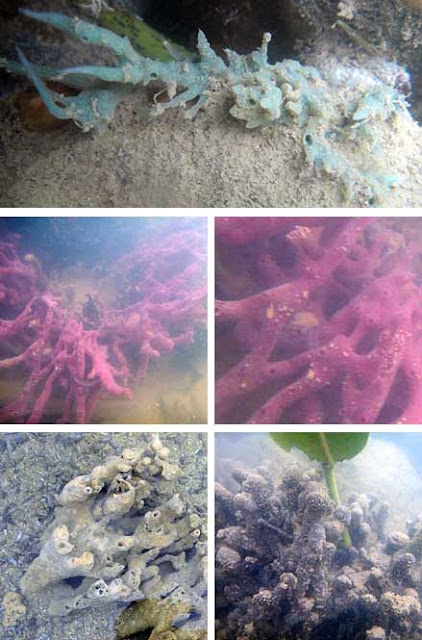 Also, several clumps of these pink ascidians which are animals too. We often see the Red-tipped flatworm (Pseudoceros bifurcus) on these ascidians, but these worms are usually more active at night. I can imagine this lagoon coming alive after sunset!

The mangroves here are very much alive! There was a little Periwinkle (Family Littorinidae) on a mangrove leaf. And many little Chut-chut (Cerithidea quadrata) crawling about on the rocks.

We have some fun talking about how to best eat the Chut-chut! 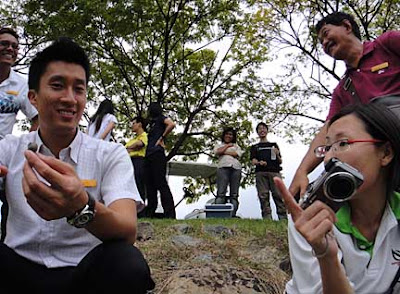 While Shufen and Jit Chern have a look at the mangroves, Travis and I check out the shore on the other side of the lagoon outside the seawall. As usual, it's a little tricky clambering down slippery rocks. 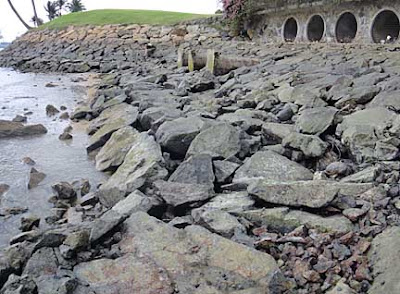 Shao Wei also joins us on the shore. Although the water is still high, we can see bits of marine life sticking out. 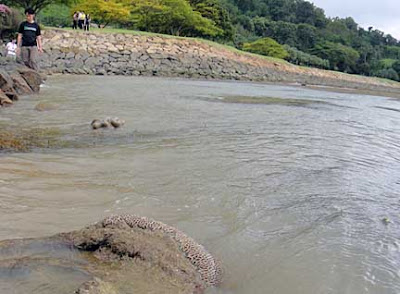 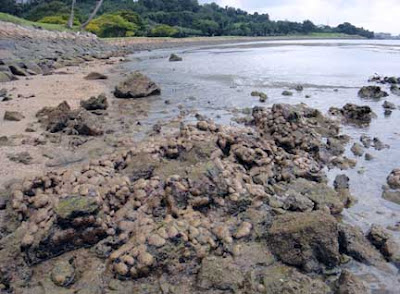 The brown lumpy stuff are colonial animals which I call the Sea mat zoanthids (Palythoa tuberculosa). Sea mat zoanthids contain the highly toxic palytoxin. It is reported that the Hawaiian natives produced poisoned arrows by rubbing the tips on the zoanthid Palythoa toxica. It is believed that the toxins are not produced by the animal but by bacteria that live in symbiosis with the polyps. Even a boring looking animal can have fascinating stories! 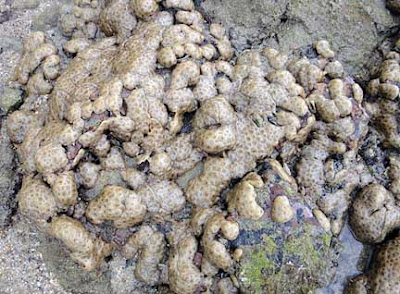 Despite the narrow shore revealed during the not-so-low tide, we came across several Favid corals (Family Faviidae). Each hard coral is a colony of tiny animals called polyps. Each polyp produces a hard skeleton. What you see as a hard coral is the joined up skeletons of countless tiny polyps. The different patterns of a coral is the result in the different ways the polyps create their skeletons. 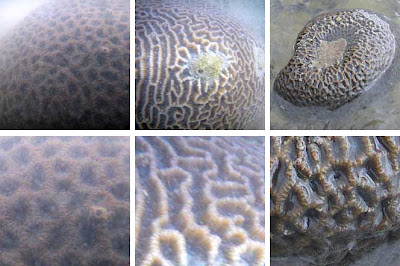 Also several Pore corals (Porites sp.). The polyps of all reef-building hard corals harbour microscopic, single-celled algae (called zooxanthellae). The polyp provides the zooxanthellae with shelter and minerals. The zooxanthellae use sunlight to carry out photosynthesis inside the polyp and share the food produced with the polyp. Hard corals are the 'trees' of an underwater rainforest, producing from sunlight, shelter and food for a whole food chain in the reefs.

And how delightful to see the Galaxy coral (Galaxea sp.) and Anemone coral (Goniopora sp.) which I don't often see on even the Tanjung Rimau side of Sentosa. 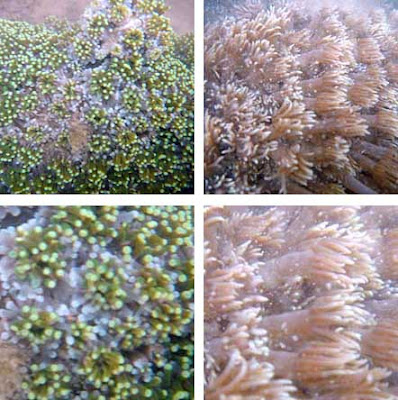 It was nice to see unbleached and healthy corals on this shore. Over the last year or so, the corals on our shores were affected by coral bleaching. Due to higher sea temperatures world wide, coral polyps lost their zooxanthellae and turned transparent revealing their naturally white skeletons. Only recently have our corals been recovering. More about coral bleaching on the Bleach Watch Singapore blog.

There are several small Leathery soft corals (Family Alcyonidae) which were not bleached. These are also colonies of tiny polyps, which are retracted at low tide revealing their common leathery tissue. 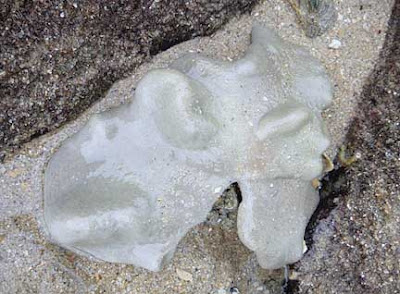 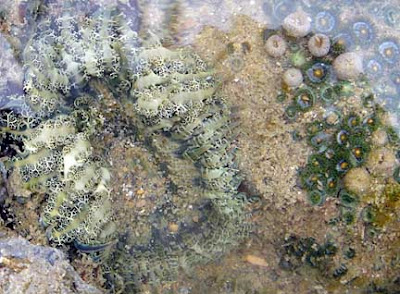 And some parts of the rubbly shore were carpeted with colourful Button zoanthids (Zoanthus sp.). 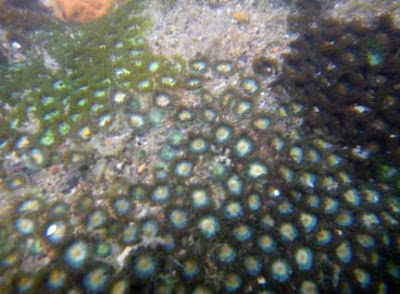 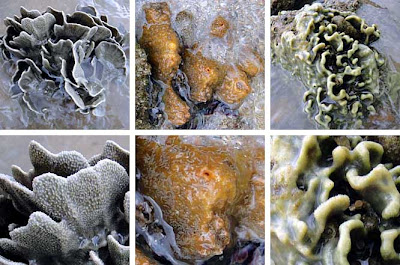 On the rocks there were many snails typical of a reefy rocky shore: fat Dwarf turban snails (Turbo bruneus), Drills (Family Muricidae) - so named because they can drill holes through barnacles and other immobile shelled animals! And the Spotted top shell snail (Trochus maculatus).

Travis found a shell of a dead Cone snail! I have so far never seen a living Cone snail on our shores, yet.... 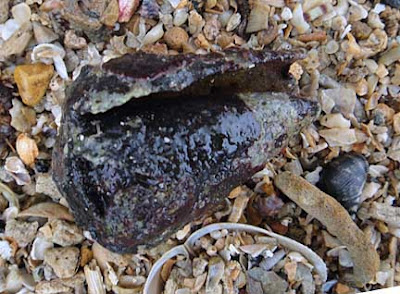 We saw a lot of the typical animals of a living reef, signs of a good reef on the low shore. We will need to come on a lower tide to have a better look. And take better photos!

While we were busy looking at the outside shore, Shufen and Jit Chern collected some precious propagules of the rare Bakau pasir for propagation and replanting. 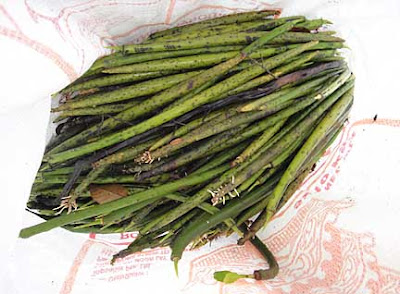 All too soon, the weather and incoming tide ended our brief encounter with this fascinating shore. At the Sentosa office, a gorgeous arrangement of live orchids! 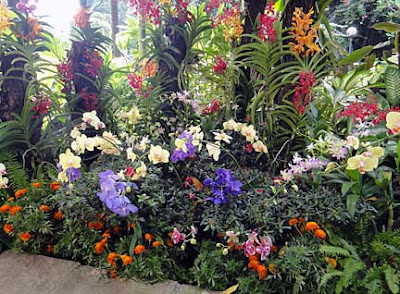 It would be fabulous if we eventually find marine life at Serapong that is just as colourful! We hope to have a more thorough look at the Serapong shore at a more suitable low tide. Can't wait!

Once again, many thanks to Gee Khoon and Shao Wei and the many warm and friendly Sentosa team members who were just as excited as we were to explore the fascinating natural parts of Serapong. We look forward to meeting them and the shore again!