Many pleasant surprises as I continued to check up on the rest of Tanah Merah yesterday. After the rather dismal experience the day before, I was delighted to see an Estuarine seahorse (Hippocampus kuda) entwined around some seagrasses! 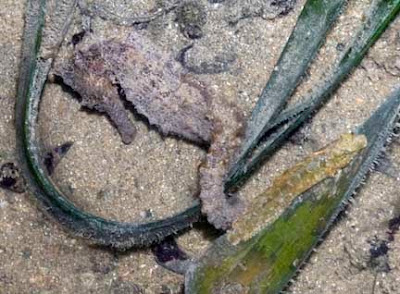 Also clinging onto the seagrass blade is a Variable fang-blenny (Petroscirtes variabilis)!

I saw many other fishes! Including several Painted scorpionfishes (Parascorpanea picta) and several False scorpionfishes (Centrogenys vaigiensis). Also many of the blue fishes and fishes with a big spot near the tail, both of which I have yet to identify. One large fish I'm glad NOT to have encountered is the Hollow-cheek stonefish (Synanceia horrida), which is rather common on this shore. 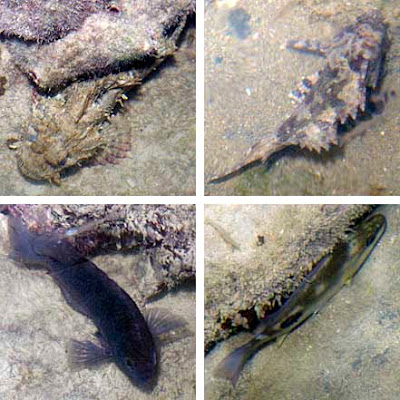 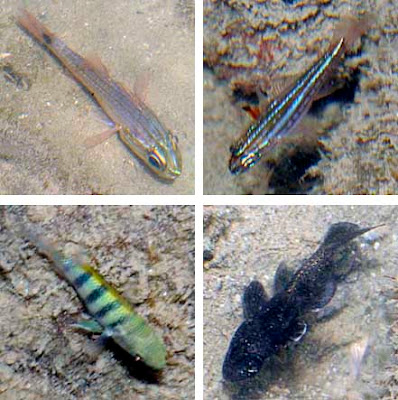 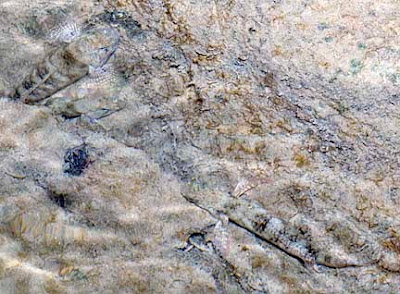 I saw several halfbeaks (Family Hemiramphidae), and this little banded fish that swims on the surface with its tail bent. I still don't know what it is.

A large Streaked rabbitfish (Siganus javus) was stranded in shallow water. I moved it into a deeper pool.

Another lovely surprise: I saw about 40 Common sea stars (Archaster typicus)! Only one seemed to be disintegrating with its arm breaking off in pieces. The rest seemed alright and I saw about 10 mating pairs! The stars I saw were well spread apart and seen from the northern end to about mid-way in the lagoon. While most were at the mid-water mark, there were some quite near the seawall too. I only saw 6 sea stars when I last visited a month ago. 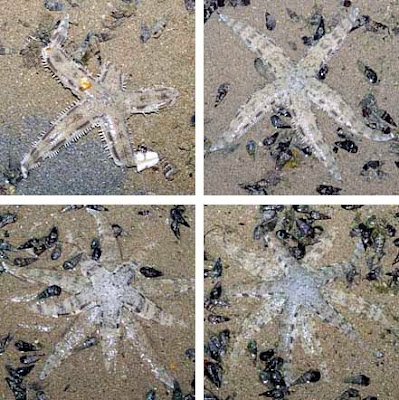 What a delight to come across a whole cluster of Saron shrimps (Family Hippolytidae), sharing their pool with little gobies. 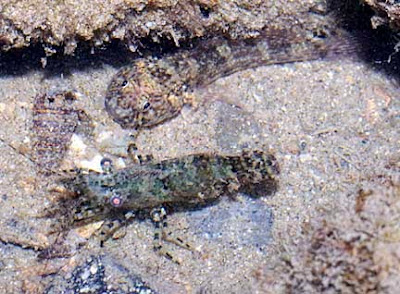 Here's a closer look at this beautiful fat little shrimp with a bent back. 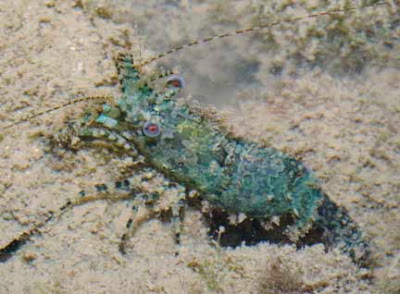 What a delight to come across this busy Leaf porter crab (Family Dorripidae) furiously paddling his borrowed leaf. This is my first sighting of it on Tanah Merah! 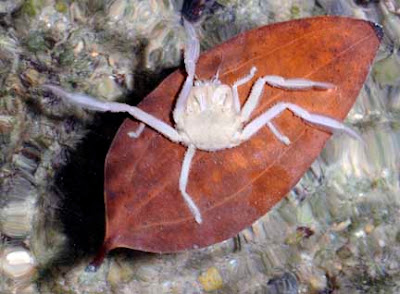 Another lovely find! Can you see it? It's a Velcro crab (Camposcia retusa) that sticks camouflaging sponges and other debris onto the velco-like hooked hairs all over its body and legs. Only the white narrow pointed tips of its pincers remain undecorated. 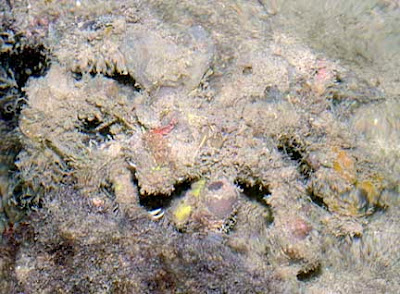 I saw many other crabs, including many individuals of different kinds of Swimming crabs, most were medium-sized.

There were countless tiny juvenile Flower crabs (Portunus pelagicus) all over the shore. I only saw one large adult that looked like it had just moulted as its body colours looked fresh and it moved rather weakly.

Strangely, I saw two humungous Mud crabs (Scylla sp.). These crabs are usually only found in mangroves. They are also commonly released by people who do so for religious reasons. It's sad to see them here as they are not in their natural habitat and are unlikely to be able to find enough of the food that they are specialised to feed on. Animals release can harm the animals and the habitat. More about this issue.

I also saw many different kinds of snails. These little Dubious nerites (Clithon oualaniensis) were still abundant on the shore. There were many on the seagrasses where it seems they have been laying their tiny white egg capsules.

I saw a living Wandering cowrie (Cypraea errones). With its shell covered in its 'furry' body mantle, it is often mistaken for a slug.

The Bazillion snails (Batillaria zonalis) are still found in the bazillions on the shore. Here's a last look at the shore as the sun set, the little dots on the shore are the snails. There were also several living Ribbed venus clams (Family Veneridae) on the sandy shores. 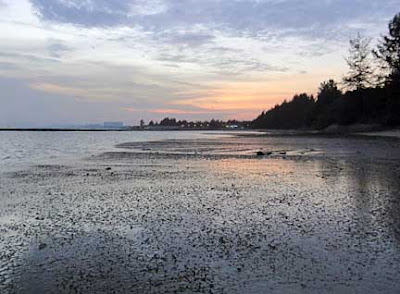 There were many large fat Onch slugs (Family Onchidiidae) on the rocks. 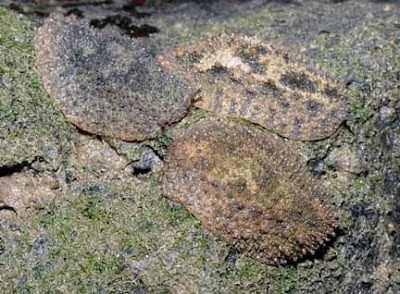 The rocks are dotted with many colonies of hard corals, I didn't see any that were bleaching. 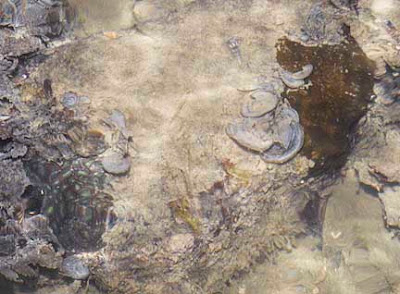 Most of them were Zebra corals (Oulastrea crispata), with many colourful Favid corals (Family Faviidae), and many brown Pore coral (Porites sp.). I even saw one young Circular mushroom corals (Family Fungiidae) still attached to a rock. But I couldn't find the Haddon's carpet anemones (Stichodactyla haddoni), perhaps because it was dark. 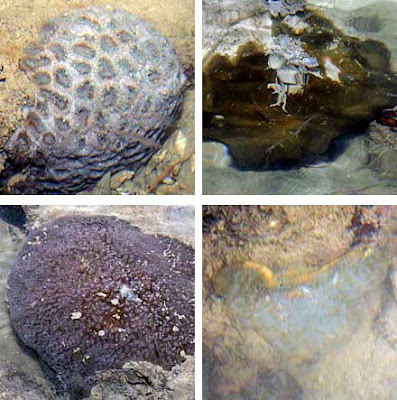 I saw about ten fanworms (Family Sabellidae), all seemed normal. I also saw many signs of Acorn worms (Class Enteropneusta).

The tide was still high before sunset, but I arrived early anyway to try to take photos of the seagrasses underwater. Here's one of the three patches of Smooth ribbon seagrass (Cymodocea rotundata). Sadly, litter is embedded among the seagrasses. 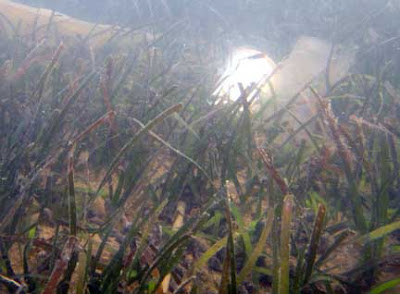 The Ribbon seagrasses seemed rather battered but not dead or dying. 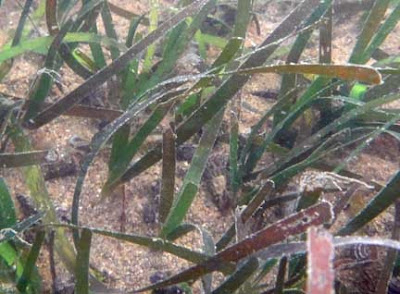 Here's a look at the large clump of Tape seagrass (Enhalus acoroides). The tips are rather badly rotted away, but the clump is still thick with leaf blades. The clump was not flowering, although there were a few bloomed female flower stalks. By the time the tide was low enough, it was too dark for me to find the patch of Sickle seagrass (Thalassia hemprichii). As usual, I didn't see any Spoon seagrass (Halophila ovalis). 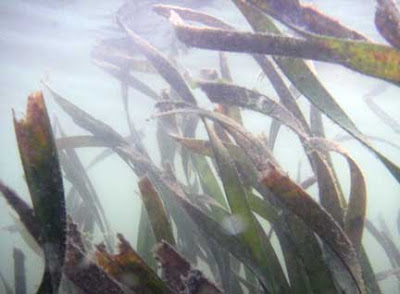 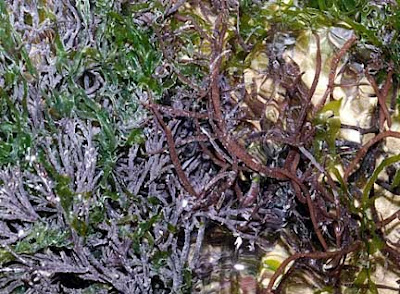 There were several clumps of Hairy green seaweed (Bryopsis sp.), my first time noticing this on Tanah Merah! But these didn't have the tiny animals that we usually find in them. The hard surfaces were also covered with Mermaid's fan (Padina sp.). I saw very little Sargassum seaweed (Sargassum sp.).

There still many signs of crude on this shore, five months after the oil spill. About 100m of the shore still has a layer of crude. See the tiny people in the distance for scale. 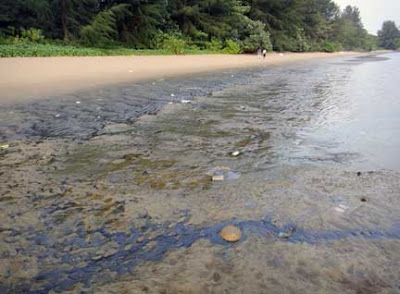 The crude is revealed as water drains out with the outgoing tide, creating a sheen. 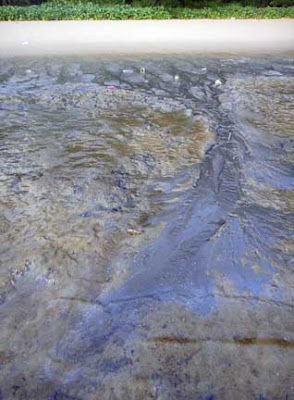 Here, the draining water exposes a pile of 'pancake' crude that still sits on the shore. 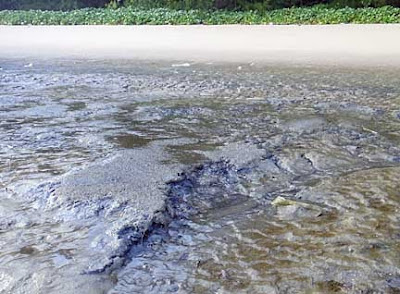 But I saw only a few patches of these whitish growths on the sand. And I didn't any of the blobs of floating slime that I saw in the other Tanah Merah lagoon the day before. 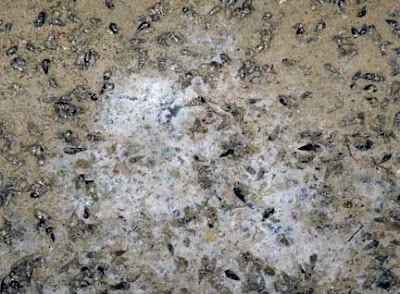 I saw two large oysters (Family Ostreidae) that had been recently pried opened. I hope it was done by birds and not humans. 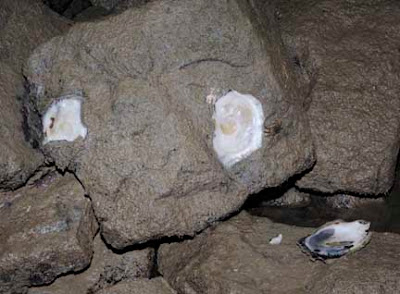 Much of the high shore remain covered with unbelievable quantities of plastic bottles. 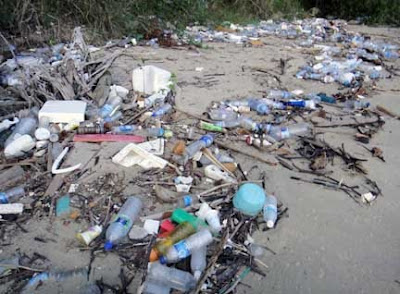 Some people must have dragged up this huge tangle of large ropes that I last saw on the shore a month ago. Bravo! 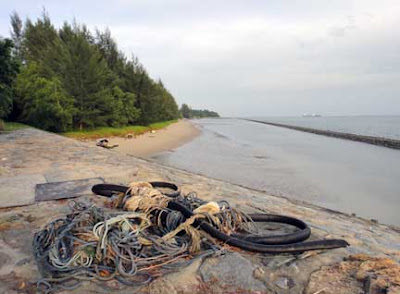 Despite the pressures on this shore, it was good to see signs of marine life here. Let's hope the shore can eventually recover.

More about the oil spill on this blog and on the Oil spill facebook page.
Posted by Ria Tan at 8:40 AM