How is oil-slicked Tanah Merah doing?

Yesterday I revisited Tanah Merah, five months since the oil spill hit this shore in May. And a month since I last visited. Some sea stars are still alive! 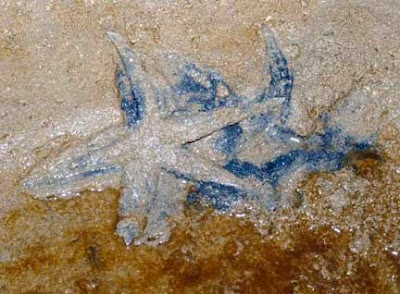 I saw about 20 of these Common sea stars (Archaster typicus) , well spaced apart. Sadly, there are clear signs of crude just beneath the sand in many parts of the shore.

Aside from one sea star with three regenerating arms, the others I saw had all their five arms intact. I didn't see any other echinoderms on this shore.

The most abundant fish I saw were Ornate lagoon-gobies (Istigobius ornatus). 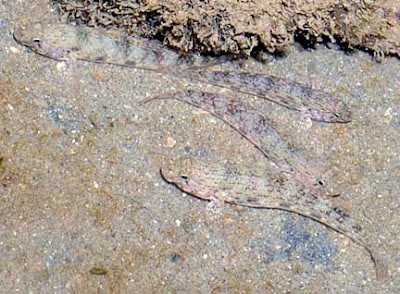 I also saw some Brown shore gobies (Drombus triangularis), and a Shadow goby (Acentrogobius nebulosus) (no photo, it zoomed away too fast). There were plenty Spotted glass perchlets (Family Chandidae), from tiny ones about 1cm long to medium sized ones about 10cm long.

The only large fish I came across was this Chocolate hind (Cephlopholis boenak). This is a grouper and it seems to be rather battered with a frayed tail. 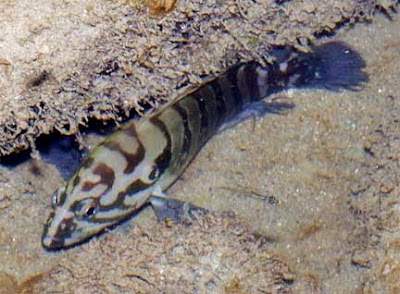 I also came across lots of tiny Red-nose shrimps. They were clustered in groups of many individuals, on the sandy bottom and on the rocks. 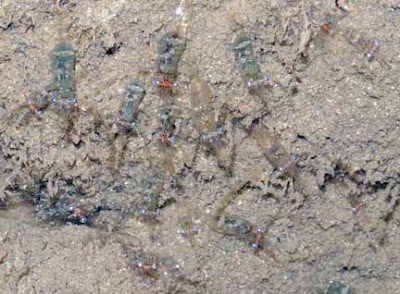 Many of the little shrimps had bellies bulging with eggs! 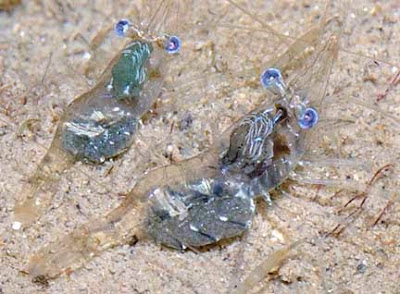 I also saw many of these small Red banded shrimps. Some of them were mama shrimps with a bellyful of greenish eggs.

There was also this Glass shrimp (Palaemon sp.) with yellow elbows.

I also saw many Penaeid prawns (Family Penaeidae) from small to large.

I saw many tiny little crabs (less than 1cm). Some were swimming crabs (Family Portunidae), others I'm not exactly sure what they are. I only saw a few Tidal hermit crabs (Diogenes sp.) and I did not see any Striped hermit crabs (Clibanarius sp.) and no Ghost crabs (Ocypode cerathophthalmus) either. 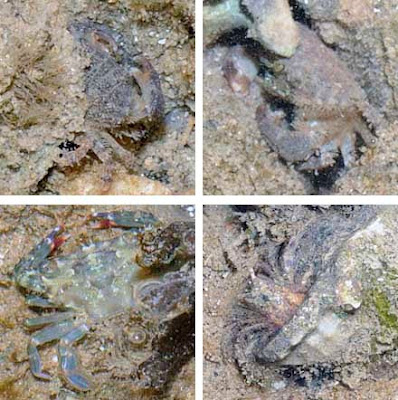 On the rocky area, there were some small Purple climber crabs (Metopograpsus sp.), and in the water, some larger Swimming crabs.

Some of the swimming crabs were missing a pincer. 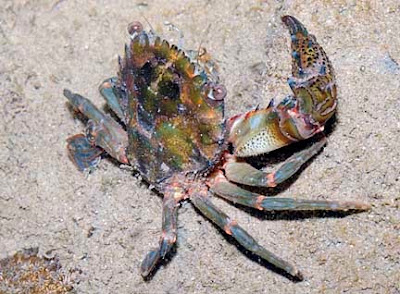 I could still hear the pops and snaps of snapping shrimps (Family Alpheidae) on the shore, but only had a glimpse of this one before it disappeared into its burrow. 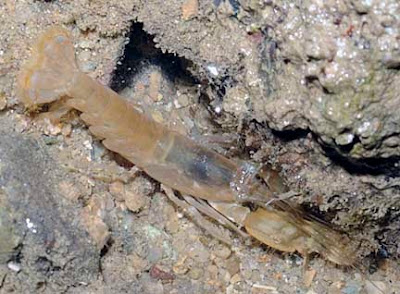 I saw this strange worm. I have no idea what it is. I didn't see any Acorn worms (Class Enteropneusta).

I didn't come across many snails. On the sandier areas, I saw one living Gong-gong snail (Strombus canarium), one rather distressed looking snail that I have yet to identify, and one moon snail (Polinices didyma). On the rocks I saw one Dwarf turban snail (Turbo bruneus) and one Onch slug (Family Onchidiidae), which is a gastropod without a shell. 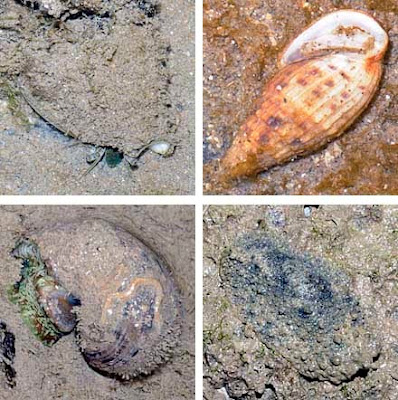 I saw two Haddon's carpet anemones (Stichodactyla haddoni) that did not seem to be bleaching. Neither of them had any resident shrimps though.

Yesterday, Rene joins us for the first time. And she spotted the Blue spatula sponge (Lamellodysidea herbacea). I also saw some Melted chocolate sponge (Chondrilla australiensis) on the rocks.

What is this strange organism? Possibly an ascidian?

The rocks are still dotted with many small colonies of hard corals, I didn't see any that were bleaching. Most of them were Zebra corals (Oulastrea crispata). I saw one clump of green possibly Favid coral (Family Faviidae), and several larger Pore coral (Porites sp.) both lumpy and boulder-shaped ones. 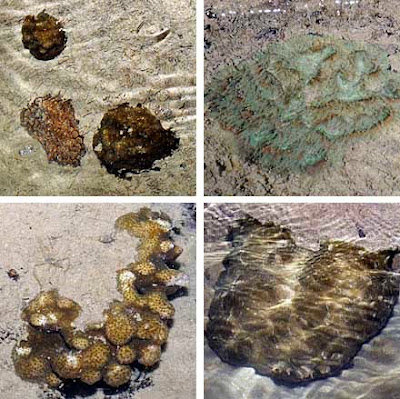 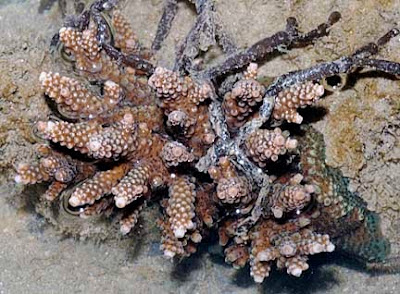 Sadly, there were lots of signs of crude still on the shore. In some parts of the lagoon, scum still collected on the water. 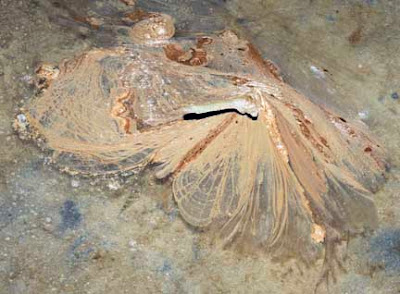 A sheet of sheen over corals growing on the rocks. There's also a tiny Bengal sergeant (Abudefduf bengalensis) fish (with black-and-yellow bands). 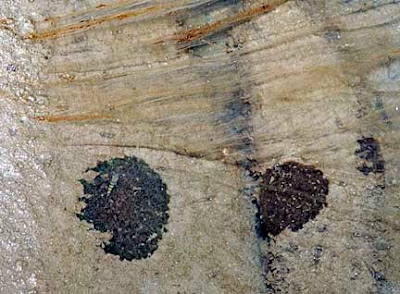 There are floating scummy bag-like blobs which drape over corals and other organisms. 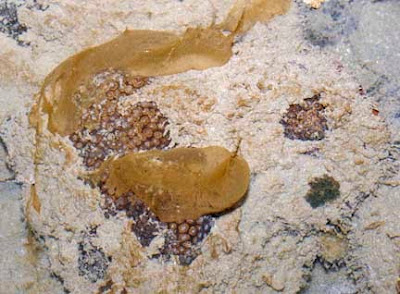 Large areas of the shore continue to be covered with these floating scummy bag-like blobs. 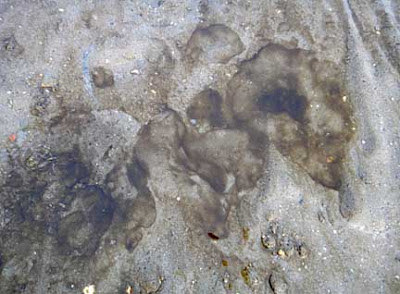 Large areas of the sandy shore were also encrusted by this brown scum which was dotted with air bubbles.

On the high shore there were still 'pancakes' of crude, still fresh under a thin layer of sand. On the mid-shore, there is crude under the soft sand. 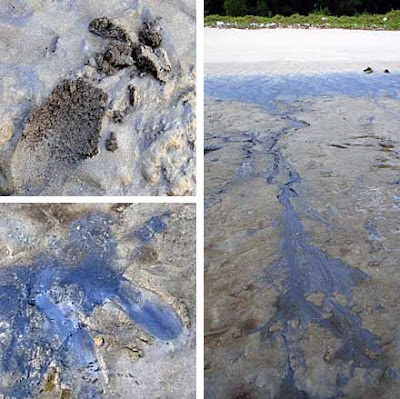 I took these photos just before the sun set. From the entrance, about 200m of the shore is still soaked in oil. 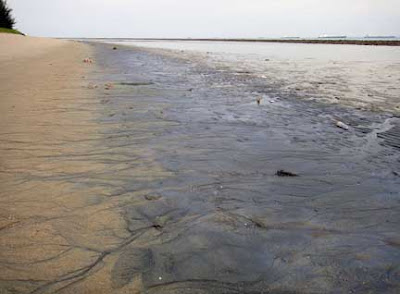 Another view of the oil-soaked shore. 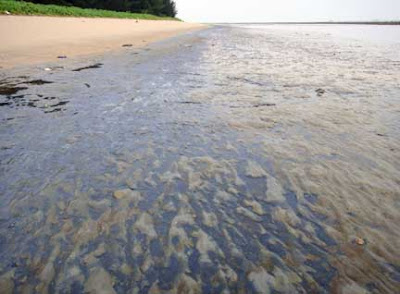 Oil continues to stream out of the sand, with sheen still showing up now 6 months after the oil spill. 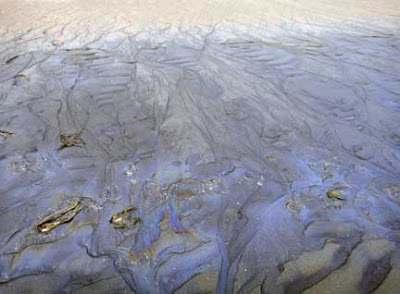 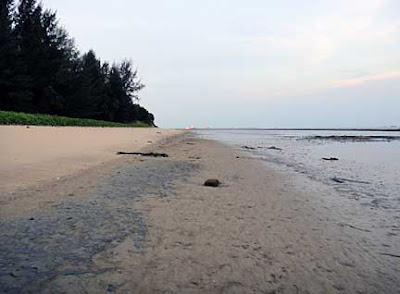 Some parts of the shore seem devoid of oil on the high shore. 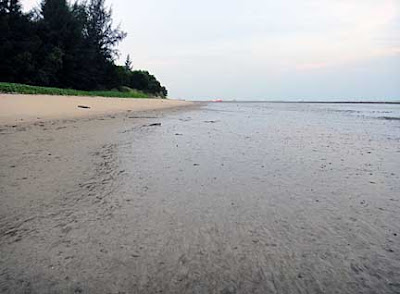 I noticed these bags containing plastic trash near the entrance. It looks like trash collected off the shore.

Alas, there is still a great deal of plastic debris washed up, especially in the further reaches of this shore. 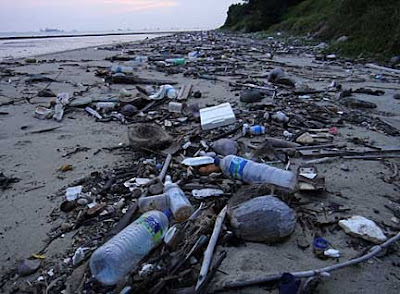 As the sun set, a large group of guys marched quickly and cheerfully towards the deeper lagoon. We have seen them before, laying driftnets there. One of the guys walked more slowly, with a styrofoam box, checking out the rock walls. 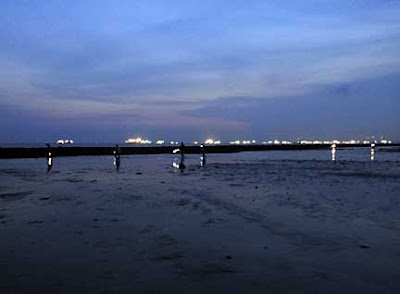 The guys also left as we did, when the tide turned.

My sense from the trip is that the shore has become much less lively. There are fewer varieties of marine life, and fewer individuals seen of each common variety. Sigh. I'll just have to keep checking up this shore and hope for the best.

More about the oil spill on this blog and on the Oil spill facebook page.

In a few hours, I shall be checking up the other stretch of Tanah Merah
Posted by Ria Tan at 10:28 AM