Yesterday was the official launch of the Sungei Buloh Master Plan! 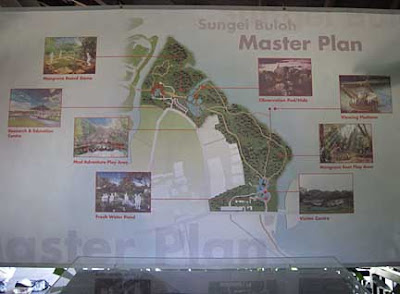 The Plan will make Buloh bigger and better. With space both for wildlife and wildlife watchers AND hordes of screaming urbanites who prefer to enjoy nature out loud. How will this be possible?!

It's all in an awesome Master Plan for a place that is very special to me. I'm so very sorry to have missed the launch as I had to be at Chek Jawa at the time. So today, I headed down to have a look at the public exhibition of the Master Plan. Better late than never. 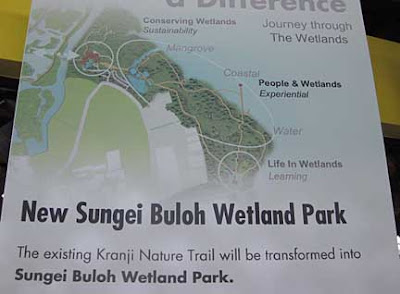 Among the most exciting features of this new Park will be facilities to allow exuberant kids to be kids and learn about the mangroves through play, in mud and all! 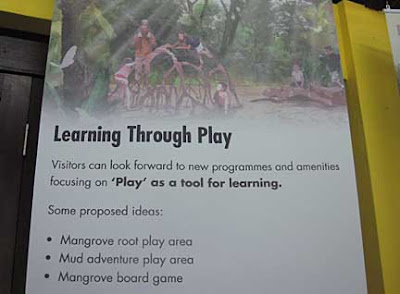 Here's some artist impressions of the fun stuff kids and the young-at-heart can loudly and playfully explore at the new Park. 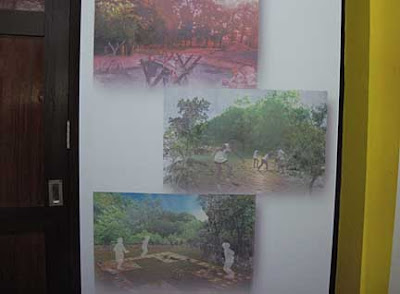 Other facilities include an education centre for school group learning activities including a freshwater pond where kids can muck about. "Wireless learning trails will also enhance the learning experience" says NParks. 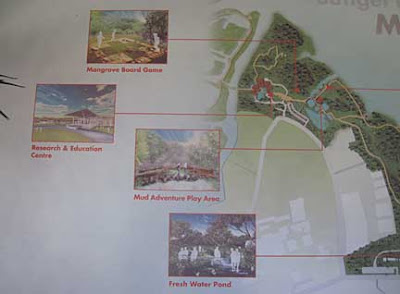 There will also be extensive boardwalks with little nooks to stop and look at mangrove life. 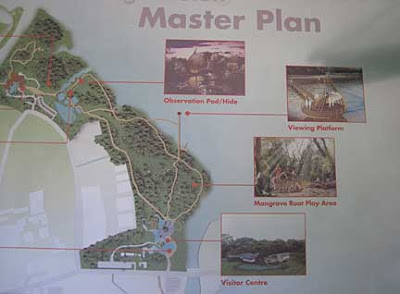 Among the facilities, these cool 'O-Pods' -- which is what I think the Observation Pods should be called. 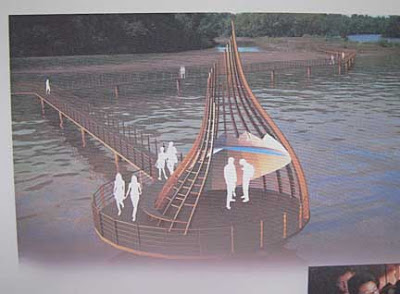 Even the hides will be stylish! 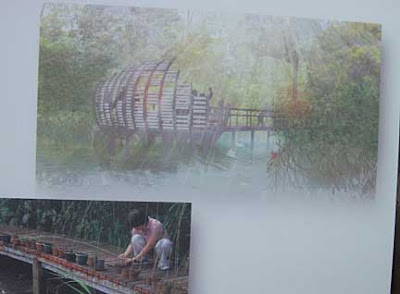 NParks volunteers got a sneak preview of the Plan in March, so this wasn't all new to me.

What about the existing Nature Reserve? Sungei Buloh Wetland Reserve will become "a restricted access area to protect its biodiversity. This is a similar arrangement for Chek Jawa and Semakau eco-park, where special permits to visits the sites have to be obtained." according to media reports. Anyone can still enter, but you will need a guide, or do some preparation before you come," said James Gan, assistant director of Sungei Buloh Wetland Reserve, NParks. 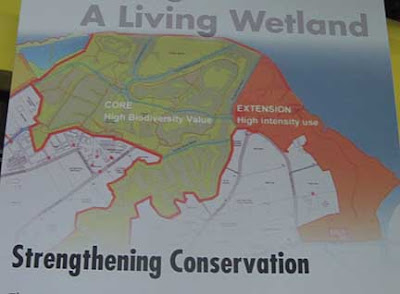 It is hoped that this move will help bring down the number of visitors to the Reserve from the current 140,000 visitors a year, to 100,000. It is feared that rising and unregulated visitor numbers may have a negative impact on the Reserve's rich biodiversity. "We are taking the proactive approach. We don't want to wait for signs of deterioration due to visitor impact before we take action," said James Gan.

Wong Tuan Wah, director of conservation at the National Parks Board, said nature enthusiasts often lament a lack of animal sightings at the reserve, and this could largely be due to congestion and noise from crowds within the reserve.

"It's like having a party in there, and that scares away the animals. So by having the segregation, the serious bird watchers and nature lovers have the opportunity to observe... It's no point for you to be able to go everywhere unrestricted, but you don't get to see or experience."

Thus, the Reserve will become a research and education hub. New facilities such as dormitories for researchers could be added, as well as meeting rooms to host conferences and workshops.

But most exciting to me are plans for a new mangrove arboretum in the Reserve. A first in the region, it will be a collection of all 67 species of mangrove plants and trees found in Singapore. It will allow students and researchers to view all species easily within a single location. A freshwater pond will also be specially created to enhance the dragonfly population.

I feel among the more important aspects of the Plan was for work to begin on resolving the long-standing problem of the severe erosion here that has been studied since 2008. 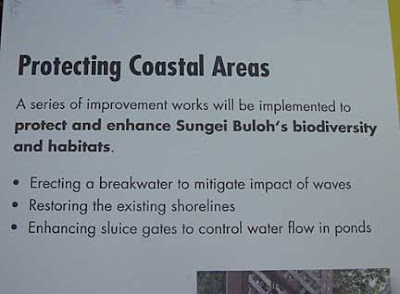 The ground is literally being lost beneath the mangrove trees near the Main Bridge.

While I recently saw this huge and seemingly healthy Perepat tree fallen over at the Mangrove Boardwalk.

It is believed that erosion here is due to the loss of silt that was usually carried down the Kranji river. Since it was dammed to create the Kranji Reservoir, the input of silt is much reduced. Among the measures to be undertaken to correct this are a "new breakwater to mitigate the impact of waves."

Work on the Master Plan will start at the end of this year, and are targeted to be completed by mid 2013.

The Reserve is a great place for everyone to learn and appreciate nature. Just as I was arriving, this family stopped at the entrance, captivated by a little squirrel. 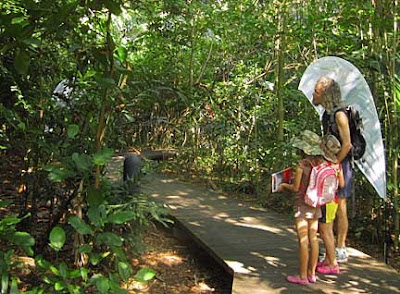 I am sure the new Master Plan will allow a broader range of people with different needs and wishes to interact, learn and love our mangroves in their own way. I'm looking forward to this!

The Master Plan exhibition is on at the Reserve until 1 Aug.

During the launch it was also announced that there would be a joint study to develop a cross-border tourist attraction involving Sungei Buloh and three Johor Ramsar sites.